Heckler & Kock (HK) have been tweaking their latest general-purpose HK 121 MG and are currently displaying it at this years Eurosatory 12 weapons expo in Paris. This is a 24-pound heavyweight that HK developed to replace the aging Rheinmetall MG3 currently in service primarily by the German military, among others.

The MG3 is a direct descendant of the WWII MG42, but designed in 1959 and chambered in 7.62x51mm NATO. As far as machine gun designs it’s proven to be reliable and effective, capable of a very high rate of fire, 1,000 to 1,300 rounds per minute (RPM), adjustable with various rate reducers and recoil springs. Still, the German military is looking for a more modern machine gun, and the HK 121 MG fits that description well. According to KitUp of the Military Times, the new HK 121 MG will weigh about the same, 24 pounds, and have a rate of fire of 600 to 800 RPM. 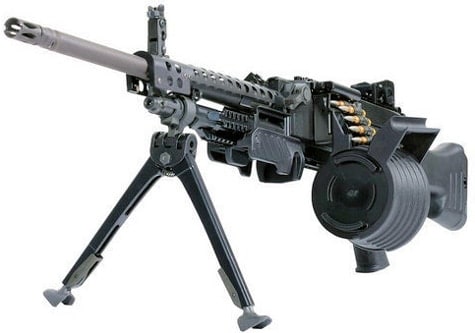 The HK 121 MG was developed after the HK MG4, a squad-level support weapon chambered in 5.56x45mm NATO. A much lighter machine gun at 18 pounds, the MG4 was designed with a self-regulating gas piston system that ensures greater reliability with different types of ammunition an operating conditions. It also comes with a Picatinny rail top-cover and 3× optic complimenting its iron sights.

One of the more interesting things about the HK 121 MG is that the firing rate is adjustable in the field, as you can see in this video.

The HK 121 MG can also feed a number of different types of ammunition, from standard 7.62 NATO disintegrating belts, 50-round quick-loading drum canisters and separate belt boxes. It is compatible with a number of different mounting systems, including M3 tripods, standard German vehicle mounts and American M122A1 tripods. It also has a side-folding stock to make easier to transport.

Still, the MG3 is a terrifying battle machine. We like what’s replacing it, but we’re also a little sad to see such an impressive piece of hardware get put to pasture.