Long before they were sponsoring extreme home makeovers and marketing through the internet, Sears, Roebuck and Company, or just Sears, used to sell guns, along with all other retail goods, through mail order catalogs and in its stores under the brand name J.C. Higgins. These were low priced guns that gave a lot of bang for the buck, but what made them even more interesting is the fact that behind the J.C. Higgins name were numerous manufacturers that included just about every major gun company of the time like Savage, Mossberg, Marlin, Iver Johnson, Hi Standard, Winchester – just to name a few.

While many of these are still great budget guns that don’t have to be put out to pasture, the J.C. Higgins bolt-action shotgun is a stellar example of the brand. She may not be the fanciest or prettiest girl at the dance, but she has it where it counts.

The Sears and Roebuck listed the Model 10 bolt-action shotgun in their catalog from 1946 until 1958 and priced it at $30 (you could get a cleaning kit and case for about 45 cents more). It was a “man sized, hard hitting shotgun” according to the catalog.  They came in .410, 12, 16 and 20 gauges, had a four-round capacity, and most could be bought with either a modified or full choke barrel.

The Model 10 has never been the center of controversy per se, but there was and is an ongoing debate about its history and even its name.

Though it’s generally accepted that High Standard, a company most notable for its .22-caliber competitive- and Olympic-quality pistols, manufactured the bulk of the Model 10s, there is still debate on who was originally produced it.  Some conjecture that the early ones were made by H&R because H&R sold a bolt-action shotgun at that time that was very similar to it.

Also, I’m referring to it as the Model 10 as do most people, but on many of the units you’ll find “583.xx” stamped on the barrel (the last digits denoting slight modifications).  The 583.xx is another number Sears used on these guns and others like it, so needless to say it may get confusing. 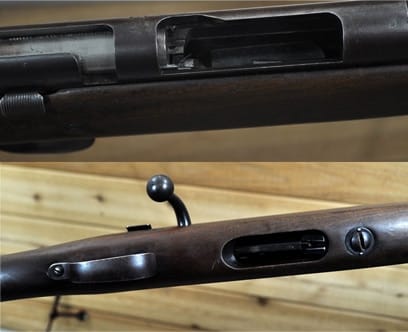 In the 1990s some models of the Model 10 shotguns were recalled, however, there is debate about what the recall was for exactly, too. One theory is that the retaining screw used to keep the bolt from being pulled out while being worked could fail or get lost, meaning it could cause the shooter to get hit in the face with the bolt.

The other issue discussed was that the receiver could fail causing the bolt to come out of battery when fired.  The latter could be very dangerous and is not a joking matter.  Here is a listing of all the High Standard made J.C. Higgins bolt action shotguns and the ones that have been recalled are noted, but remember that only part of the production run was recalled.

Just because they’re a budget gun doesn’t mean they’re junk.  The JC Higgins Model 10 shotguns are still pretty common and I handled and fired a number of them over the years.  As long as it isn’t one of the recalled models, they should continue to function for years.

You can find a nice condition Model 10 for around $100 on many online auction sites, however, I have seen them in pawn shops for less than that. Bear in mind that these are not going to replace your auto loading bird gun, and they were they never intended to, but they do make a good truck gun in rural areas or a snake gun for the boat.