The Knight’s Armament company (KAC) has been supplying the US military and armed and police forces around the world for two decades with precision rifles for snipers, designated marksman and sniper support roles. They are most famous for their SR-25 which have been in use with the US Navy since 1990 and have been actively deployed by the Marines since 1993.

Based on its performance with the Marines the Army tapped KAC to develop a similar rifle for its long-range shooters, and the result is the M110 Semi-Automatic Sniper System, an SR-25 with a modified buttstock and rail system, and also it’s tan.

The SR-25 was designed by Eugene Stoner for manufacture by Knight’s Armament and is not entirely compatible with the AR-10, as the bolt carrier group and receivers have been modified for better accuracy. It is chambered .308 Winchester and has a 20-inch heavy, free-floating barrel, and is one of a very few production rifles with a .5 MOA guarantee.

Not willing to sit on their laurels, Knight’s Armament constantly tries on small changes to their platforms, not redesigning a proven design but tweaking it based on user feedback. They’ve made a change to the rail system, URX (Upper Receiving Extending Rail Adapter System) 3.1.

Less rail is the new rail. The URX 3.1 removes a good deal of rail from the 3-, 6- and 9-o’clock rails, leaving them smooth for less cheesegrating, but with screw holes for optional rails. This is only at the center of the rails, there are small, permanent rail sections at the front and rear of the rails, along with sling points attachments. The top rail is full-length.

They will also receive new QDC (quick detach coupler) flash hiders for use with their QDC  suppressors, and some models will receive factory 45-degree-offset backup iron sights (BUIS). 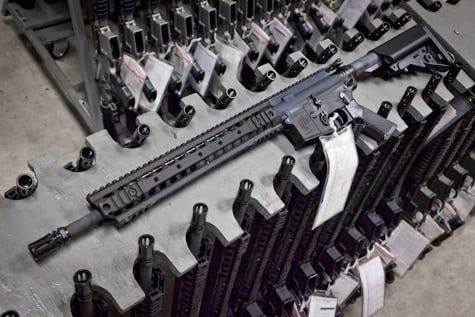 This update will expand the SR-25 lineup to four models, two rifles and two carbines, and the SR-15 to four as well, an 11.5-inch PDW (personal defense weapon), a 14.5 SBR (short-barreled rifle), a 16-inch carbine and 18-inch carbine. Knight’s Armament has not updated their website but we’ll be sure to let you know when they do and give you full specs and details pertaining to these beautiful guns.