When something goes wrong with your shotgun, the last thing you want to do is hesitate. Fixing a malfunction quickly could mean the difference between winning or losing — between living or dying!

There are three basic pump shotgun malfunctions: stovepipe, failure to extract, and failure to eject. As with all malfunctions, they can be caused by a dirty weapon, a weapon with a bad or damaged part, shooter error, or even bad ammo. Thankfully, because it is a pump shotgun, you can clear these malfunctions rapidly and stay in the fight.

It should be noted that the immediate and remedial actions described below are based on a shotgun having a side (verse bottom) ejection port.

If an expended shotgun shell lingers in the line of fire between the bolt and the chamber, it can mess up the cycle of the gun. The shooter won’t be able to load a fresh round. This type of malfunction can occur if the ejector is broken or missing. This type of malfunction could also possibly occur if the shooter “short strokes” the pump action, so make sure you rack the action all the way back hard every time. There’s no need to coddle the gun here. Treat her rough! 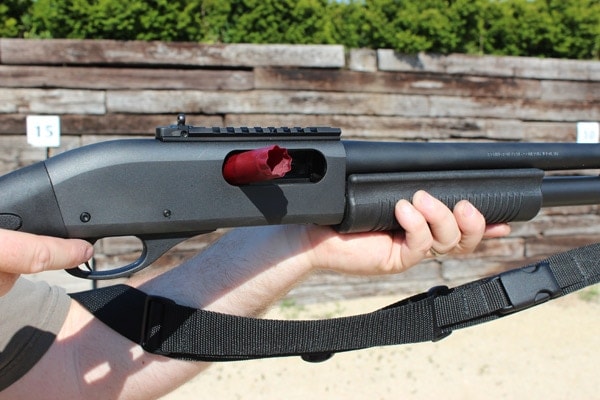 The fix is quite simple really: tilt the gun until the ejection port is facing down. Gravity is your friend and the spent shell will fall if you flip the gun over completely. Be sure to keep your barrel level (horizontal) and preferably still pointing at the threat. Once the shell falls, push the action forward and address the threat.

When conducting immediate action here, your hand positions shouldn’t move. The only thing that moves is your trigger finger. Like when clearing all malfunctions, put your finger straight and off the trigger (hopefully, that’s second nature).

There is another malfunction worth mentioning here. That is a double feed malfunction, mainly caused when a pump shotgun shooter tries to perform a speedload when there’s already a shell ready to enter into the chamber.

Bottom line is tilt the gun. Do the same thing as mentioned above. The only difference here is the shell needing ejecting hasn’t been shot yet.

A stovepipe malfunction is, in essence, a failure to eject since the expended shell casing hasn’t cleared out all the way of the action. A shell that’s a stovepipe sticks half way out and half way in of the ejection port. So now what? 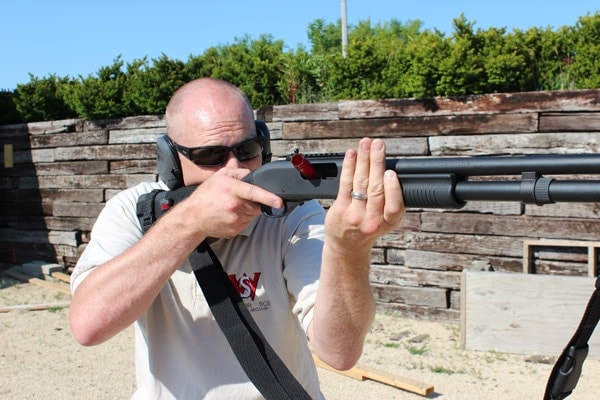 Release the hand holding the forward grip. Form a bladed hand (fingers erect and together; the thumb should be in tight to the palm too). Whether you’re right-handed or left-handed, it doesn’t matter: with the palm of your hand facing the ejection port, swiftly swipe back towards your face, knocking the shell out of the ejection port. At no point should you go over the top of your shotgun, interrupting your line of sight (aim).

After the shell has been successfully ejected, get your support hand back on the foregrip, rack the action, put it into battery, and get prepared to fight.

What happens if you can’t extract your shell? What if there’s a shell stuck in the chamber? In that case, you’ll either have a very hard time even moving the pump action rearward or the action will come back but without the shell, which would be stuck in the chamber. Most often, with this type of malfunction, it will be the former. However, if the latter occurs, here’s what you do: Rack that foregrip pump as hard as you can, going forward (into battery). You want to ensure that the bolt hits the shell and, particularly, that the extractor wraps around the rim of the shell so you can manually extract it with brute force. 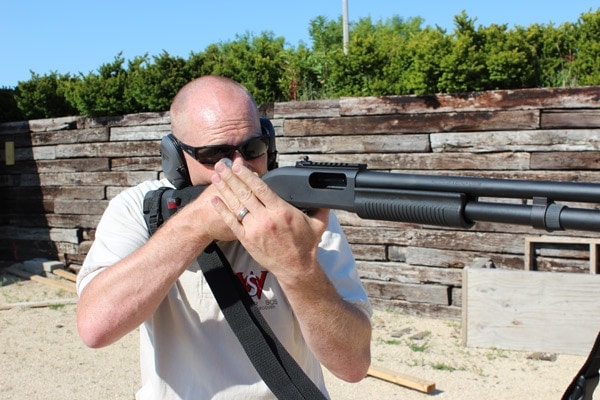 If a shell is stuck that tight in the chamber, the Hulk would have a hard time extracting it while keeping the weapon shouldered. Instead, depress the action release and strike the buttstock hard on the ground. Do this while simultaneously mashing the foregrip pump rearward in an attempt to extract the stuck shell casing. Be careful not to stick your face over the muzzle and don’t have your finger on the trigger either, just in case the shell hasn’t shot yet. You don’t need an extra eye socket.

This remedial action technique can be done on the move, while walking or moving rapidly to cover. Just bend down and hit the buttstock on a hard surface, get back up and get in the fight. If the ground is soft, improvise by using a hard wall, just be aware of the muzzle in relation to your face or another “friendly” nearby.

So there you have it. You’ve invested in a great tool: the highly lethal pump shotgun. That thing will work no matter what; and thankfully, when it hiccups, you’ll now be prepared to clear any malfunction. That is, with some practice. So don’t just sit there, make a plan to get out to the range and try these techniques! Someday it could save your life.