The Ruger Mini 14: One of the Greatest Firearms of the Past Century

L. James Sullivan is not a well-known name in many gun circles. He should be. He was one of the driving forces behind the M16, Stoner 63 assault rifles and the Ultimax 100 light machinegun. One of the other weapons he worked on, and one that shows elements of all of these designs was the Ruger Mini-14. Developed from 1967-1973 with Bill Ruger, the Mini 14 was first put into production in 1974. Now at age 38, it is a classic of firearms lore and has earned a spot among the great firearms of the past century. 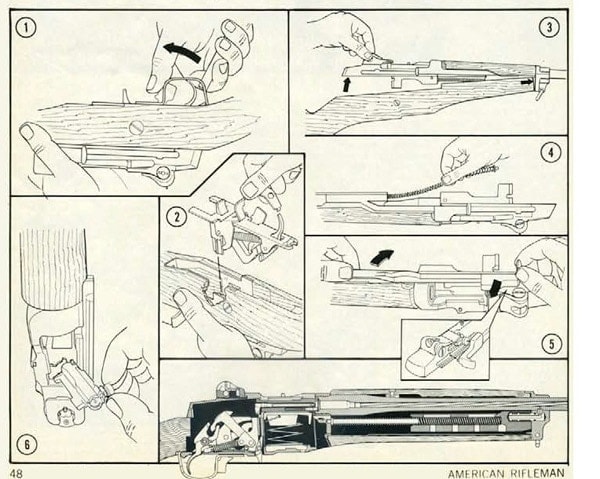 The outward style of the firearm, ostensibly a shortened version of the M-14 battle rifle, gave it the name “Mini-14.” However, very little of the M-14 can be found in its mini-me descendant. The Mini-14 shoots .223 Remington instead of the full sized 7.62x51mm NATO round, uses a Garand style rotating bolt and simplified gas system, and is semi-automatic only.

With this said, the simple military style of the M-14 is preserved in the fact that the Mini is easily field stripped without tools into large components. Its trigger guard mounted safety lever is positive and easy to manipulate in the dark, or in mud or snow. It will fire from a box magazine of 5, 10, 20, or 40 rounds or in a single shot mode without the magazine inserted.

The military style diopter sight, reminiscent of that of the M-1 carbine, make quick close shooting possible. This made great sense from a marketing standpoint. When the Mini was first marketed in the 1970s, surplus M-1 carbines could be had very cheaply and most men in the 20 to 50 age group had spent a year or two either in the peacetime military or wartime service behind the sights of an M-1.

The size of Ruger’s small carbine also favored comparably to the classic. You could say that the Mini took all that the public liked about the M-14 and the M-1, made it semi-auto and combined them into a short and handy firearm capable of firing at ranges the .30-caliber carbine round couldn’t touch. Typical weight was 6.75 pounds, with a 28-inch overall length.

In fact, Ruger was so taken with the design he later said that “I have often said—and I know I am correct here—if we had brought the Mini-14 out five years earlier it would have become the standard Army rifle.” 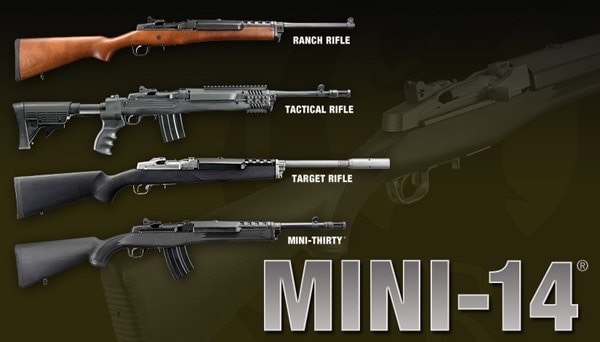 The first 1,000 or so Mini-14s were manufactured in Southport Connecticut though production was then moved to Newport, New Hampshire. They were all wooden stocked with a gold bead front sight. They could be made efficiently and economically with cast and stamped steel, which eliminated expensive milling and forging. The introductory price was $199.

Beginning with serial number 181-07488 in 1978 and moving until number 197-12180 in 2004, the classic era of the Ruger mini-14 produced over a million standard rifles. This included the Ranch rifle series, which was introduced in 1982. Sporting options like a scope mount, folding rear sight, improved ejector, and optional black synthetic stock, the rifle was a success commercially. In 2004, Ruger closed the doors for two years on these classic rifles and introduced another redesign.

In 2005, a further improved Mini-14 saw light. With reworked tooling, Ruger tweaked the legacy design with a number of slight changes including gentle contours to stock and receiver, changed out the rear sights, and most importantly gave the short barrel a 1 in 9-inch twist for more modern ammunition.  These new rifles begin their serial number range with 580-00001.

While some models are made for export in .222 only, most Mini’s will shoot either 5.56x45mm NATO or .223 Remington. In fact, only the Mini-14 Target Rifle version accepts .223 Remington ammunition exclusively. This model features a black laminate thumbhole stock with an adjustable length of pull and a heavy barrel. These features ratchet up the weight to 9.5-pounds but trades hyper accuracy for the sacrifice.

Souped-up versions of the Mini were made by Bill Ruger & Co. to compete as a military contract rifle. These include folding stocks, extended flash suppressors, and protected front sights. Dubbed the AC-556, the sleek little carbine picked up a bayonet lug to go along with a three-round burst capability.

The rifle, however, still fires from a closed bolt and as such can have a cook-off if fired for sustained periods and left with a round in the chamber. AC-556 is slightly longer to accommodate the select fire sear inside the small receiver of the Mini-14 design. Unfortunately, few military contracts appeared and the Bermuda Defense Force, the French Gendarme, and a few others only officially use the Ruger.

The Ruger Mini-14GB, basically a standard semi-automatic Mini with the addition of the AC-556’s front sight, flash suppressor, and optional folding stock, was marketed to police forces worldwide in the 1980s. This is the version most often seen in old A-Team episodes as well as numerous films and is still often found in the hands of corrections and law enforcement.

The classic Mini, bought commercially, is a very popular patrol rifle for law enforcement. One of the popular features of the Mini over AR platforms for LE use is the more politically correct notion of a small wooden-stocked carbine over an ‘evil’ black rifle.

All in all, the Ruger Mini-14 is a legacy design whose time has come and continues to be in development. Its popularity with shooters of all levels and in professional circles should keep it in production for quite some time.