The Colt Paterson: The Original Revolver

Back in 1836, when Sam Colt introduced the Paterson, most firearms were single shot muzzleloaders – and flintlocks at that.  It was in the 1830s that the percussion cap became prevalent.  It was this innovation that made guns like the Paterson possible.

The Colt Paterson is a five shot black powder revolver produced from 1836 until 1842 by the Patent Arms Company of Paterson N.J.  It is the first percussion cap revolver.

In the early 1830s a teenaged Sam Colt was at sea working on a ship sailing to Calcutta.  As legend has it he noticed the way the ships steering wheel worked and imagined a gun that used a cylinder that would turn behind a single barrel – or Colt may have also seen Elisha Collier’s flintlock revolver.  Whatever his inspiration, he set about carving wooden models for a percussion cap revolver on the journey home. 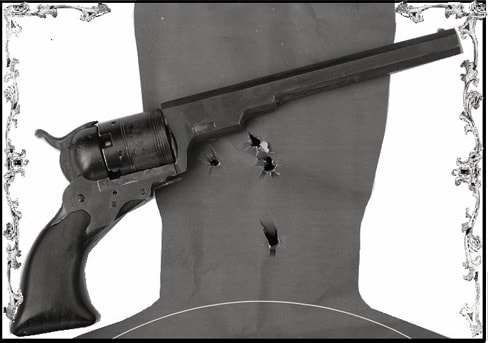 When Colt returned from sea he set about getting the capital together to produce his idea.  At the age of 18, Sam billed himself as “the Celebrated Dr. Coult of New-York, London and Calcutta” while giving demonstrations of laughing gas.  The money he made was used to produce prototypes.  Once there was a functional design, Colt set about getting his design patented.  He first traveled to England and France to secure his patents, and then on Feb. 25, 1836, he was granted a patent in the U.S. and set up his company: the Patent Arms Manufacturing Company. 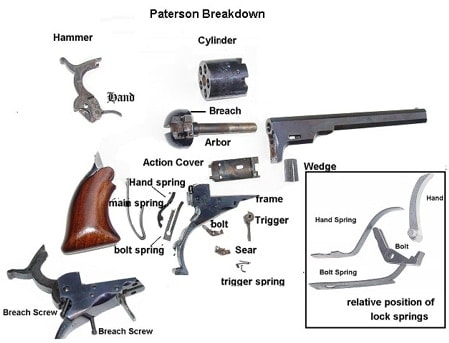 The original design of Colt’s revolver had five shots and were made in three sizes: pocket, belt and holster. The barrel lengths and calibers varied but the basic function was the same – they were single action revolvers.

When you see a Paterson you will notice a huge difference between the later Colt designs like the later Colt Walker.  The Paterson uses a folding trigger – where the hammer is pulled back, the cylinder rotates to bring the next chamber in line with the barrel, and the trigger swings down – and it also lacks a trigger guard.

Colt set up his new company in Paterson, New Jersey, and they would eventually build about 2,800 revolving pistols.  The first revolvers were ready for sale in late 1836. It originally came in .28 caliber with different barrel lengths.  The price was $50, which translates to about $1,000 today.  And, of course, changes were made to the design during the production run – most notably the caliber was increased to .36. The power of a .36 Paterson is very similar to a .380. In 1839 he received a patent for an improved design, which included a loading lever.

The original Patterson design was awkward.  To load it the user had to take it apart.  The barrel had to be removed so a separate loading lever, provided by Colt, could be used to load the cylinder off the frame. 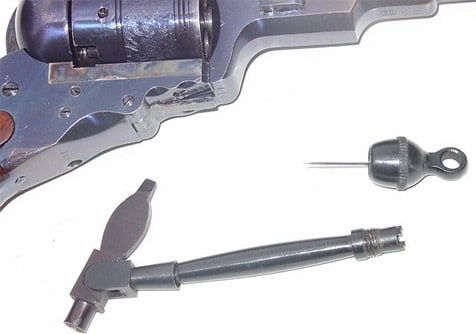 The 1839 improvements helped with this issue, but there were still other problems. The folding trigger design was delicate, the loads were not very powerful and it was susceptible to fouling from the black powder.

It worked, but it was far from perfect.  The sales were far below what Colt and his investors expected.  The U.S. Army tested some of the weapons but passed on adopting them. They believed them to be too fragile for military use and in 1842 the company closed its doors.

Like many antique Colt’s, the Paterson’s are highly sought after by collectors.  One recently sold for over $950,000 at auction.  At the time, that is the most ever paid for a single firearm.  Though this one was a later version with the loading lever, often referred to as a Texas Model as they were famously used by the Texas Rangers.

The Paterson is an important step in the development of the modern revolver.  Sam Colt was later able to form the Colt’s Patent Firearms Company.  The new company produced the firearms that would become the iconic Colts. These were all based on the original Paterson design. Although the Paterson was revolutionary in its time, it was not perfect.  It is however, the original revolver.