The Olympic Games, dating back to the ancient sporting events of the time of Aristotle, have always had a military flavor to them. This is most evident in the pentathlon events. Today, the modern pentathlon is very modern indeed, and involves athletes facing off in a race against both the themselves, and in combat with swords. Now even lasers have been added to the mix.

Somewhere around 708 BC (that’s about 28 centuries ago, give or take), the Pan-Hellenic Games of Greece featured a contest that combined five then-current military skills. These were the javelin throw, a sprint, the discus throw, and wrestling.

The javelin represented the throwing spears used by Greeks in both hunting and warfare.  The discus had important ties to mythological warriors such as Achilles. The sprint is to this day useful in warfare and wrestling was the ultimate close quarter’s combat of the day. These games often saw the best warriors in all of Greece competing in safe, but determined mock combat, for the prize of a laurel wreath.

Greek philosopher Aristotle described competitors in the Pentathlon of the ancient Games as “perfect sportsmen, because in their bodies strength and speed are combined in beautiful harmony.”

When the modern Olympics were established in the late 19th century, French Baron Pierre de Coubertin reimaged the old pentathlon to make it more current. Accounting for the skills of a 1900s-era soldier would need to survive on the battlefield, he updated the event to 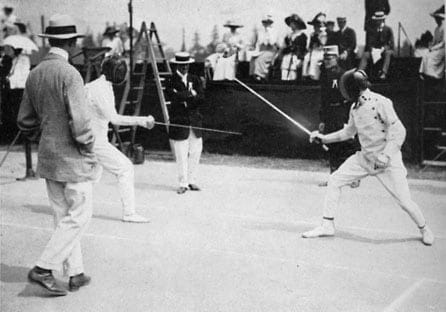 reflect its time. This modern pentathlon required the competitor to ride an unfamiliar horse, compete with a pistol in a rapid-fire timed marksmanship event, perform a 300-meter swim, race a 4-K cross-country run, and fence an opponent with a sword.

As with the ancient Greeks, some of the best warriors in the world participated in this new marital combat sport. In 1912, a young George S. Patton, then a 2nd Lieutenant in the Army, competed in the Stockholm Olympics.

He maintained for years that he outshot his competitors by the fact that he used an Army issue .38 revolver, instead of a .22 like his opponents, meant his holes were larger and a round fired through an existing hole was counted as a miss. He finished fifth overall, but if he had won the pistol portion, he would have brought home the United States’ first Gold Medal in the event. As it is, the US has never in the past 100-years won gold in the modern pentathlon.

Patton, never one to let things go, engineered a rematch more than thirty years later and won, but walked away with only his personal satisfaction and no medal.

The Pentathlon of today

The event that Patton competed in has changed progressively over the years. Today competitors still compete in a fencing event, but with an electrically scored epee saber.  This is followed by a 200-meter swim. After the dunk, the competitor has a riding event on a randomly selected horse that they have never met before. After gliding through 12-show jumping obstacles comes the combined shooting event.

The Union Internationale de Pentathlon Moderne, the sport’s oversight body, introduced the new combined event after the 2008 Beijing Olympics. In it, competitors have to run 3,000 meters (3 kilometers) while stopping and shooting at three sets of five targets.  The format is that they run to the shooting range, hit five targets, then sprint 1,000 meters and repeat this three times over. It is in this round that seconds matter and accuracy is everything. Most Olympic level competitors fire five shots at five separate targets in less than ten seconds.

From the 1980s until this year, athletes used a 4.5mm air pistol for the shooting portion. This made economic sense as most competitors shot in excess of 1,000 rounds per month in training.  In 2010 during the Youth Olympic Games in Singapore, athletes used a laser pistol instead of the air gun for the combined event for the first time during an official international competition. 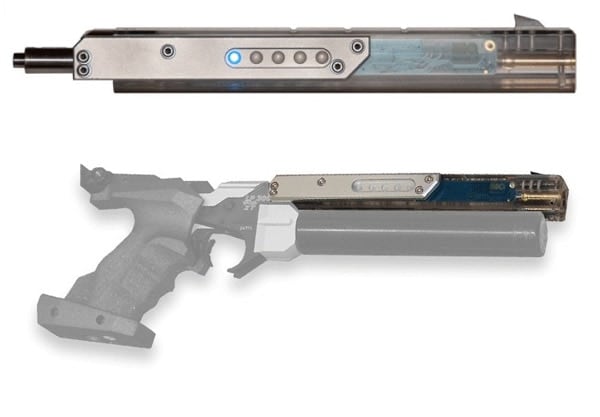 The laser pistols will see their debut at an Olympic Games in London.  Laser shooting was introduced for both safety reasons and to reduce the environmental impact of the lead pellets. The Class-I laser fires for only 40-miliseconds; it would take eight hours of constant beam to damage a human eye.

The laser pistols, produced by IQ-Sports as kits for existing Feinwerkbau, Steyr, Morini, and Walther competition pistols, run about 800 Euros ($970).

Better yet, the target that the laser is firing at is a precision laser based target (PLT) that shows the shooter, judges, stadium, and the world exactly where the ‘shot’ hits within millimeters.

England, with its notoriously strict firearms laws, had initially seen some controversy about air guns being used. Then, in 2010, when the laser alternative was introduced they still objected. It was only in the last few months that these devices were even allowed into the country and this has hurt team Great Britain, who hasn’t even been training on them (though this seems to be ok with their competitors).

The 2012 London Olympics has 36 men and 36 women competing in the event from more than 20 countries. Women competed in Modern Pentathlon at the Olympic Games for the first time at Sydney 2000, and are now a welcome and permanent fixture to the sport. 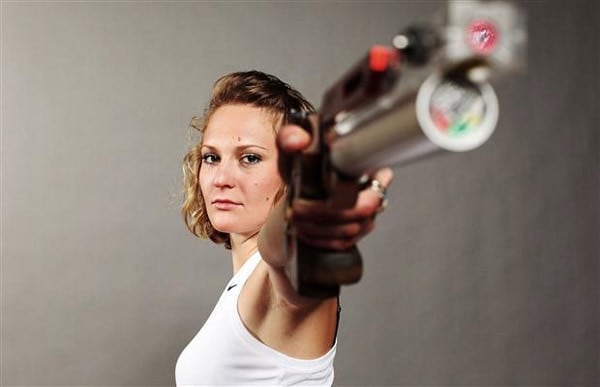