Newspaper editor Arthur Brisbane once said, “The fence around a cemetery is foolish, for those inside can’t get out and those outside don’t want to get in.” However, this has not always been the case. For centuries graveyards had to content with the scourge of grave robbers who preyed on the valuables of corpses, and even the corpses themselves. This threat led to an industry solution—grave guns.

Set-guns, defined as a gun that is set to fire on any intruder that encounters the wire that sets it off, have been around since at least the 15th century. The concept is simple: take a loaded and primed firearm, plant it securely in a desired area, and attach a string, spring, or wire for the hapless intruder to trip over. The result was a cheap and effective camp defense against bears and wolves. They could be armed and left active for as long as the powder stayed dry. These old set-guns evolved into purpose built cemetery guns by 1700. 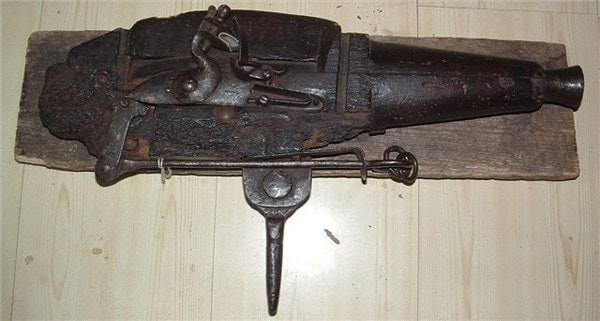 Popular in Britain until 1827 when they were outlawed, cemetery guns were built in a number of different designs. One of the most popular was to the patent of one Mr. Clementshaw, built in both York and Loughton as late as 1890. Typically the weapon would be a large-bore, bell-mouthed flintlock smoothbore affixed to a block of thick wood. Attached to the bottom of the block were one or more iron spikes, used to drive the weapon into the ground. Up to three wires extended from the trigger and these were set up in the area to be defended and the gun was triggered by any trespassers unlucky enough to catch a foot on one.

Loaded at night and left armed by the cemetery keeper until his return the next morning, the device was more night watchman than anything else. Mourners and visitors were well aware of the weapons, which were disarmed during the day and knew better than to come back after dark. Many a crafty keeper would wait until sunset to move his weapons to surprise any would be grave robbers who had scouted the ground the previous day. It was up to the keeper, of course, as to whether it was loaded with a light draw of rock salt or birdshot to pepper and scare away an intruder, or a heavier shot to maim and kill.

The Museum of Mourning Art at Arlington Cemetery in Drexel Hill, Pennsylvania has an example, made in 1707, in their collection and on public display.

It wasn’t just the cemetery itself that had been uparmed to ward off thieves. Once grave guns were banned in the 1820s in Britain, heavy 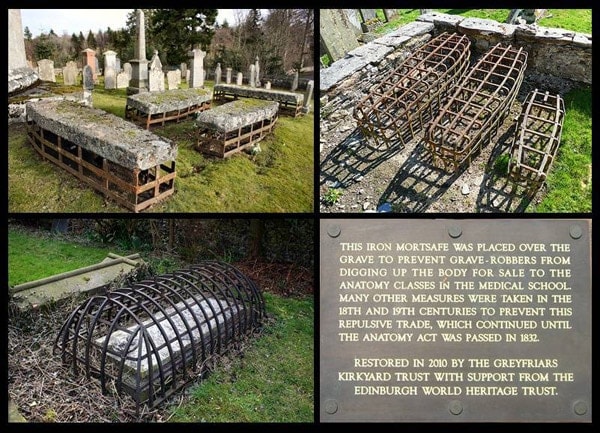 iron and cement grave safes were erected around cemetery slabs to add an extra layer of protection. Very common in Europe, these are seen less frequently in the United States. Wrought iron fences with sharp spikes were often built in their place and are often found in the Northeast. These fences were part of the anti-grave robbery arsenal.

The golden age of body thefts in the United States was just after the Civil War. From 1865 and 1890, the number of medical schools in the country increased by over 100%. These students needed cadavers to train their budding surgeons in anatomy and physiology. At this time, practically the only bodies available were those of condemned convicts. This led to a cottage industry in grave robbery for recent, fresh corpses. It was during this period that John Scott Harrison, the son of former President William Henry Harrison and the father of President Benjamin Harrison, was stolen and later found at a medical college in Cincinnati.

In 1878, a number of “Coffin Torpedoes” hit the market. One design by Phil Clover of Columbus, Ohio was for an abbreviated shotgun that rested just inside the coffin lid. Once the lid was raised, the gun would fire directly into the face of the violator, discharging a number of 36-caliber lead balls. 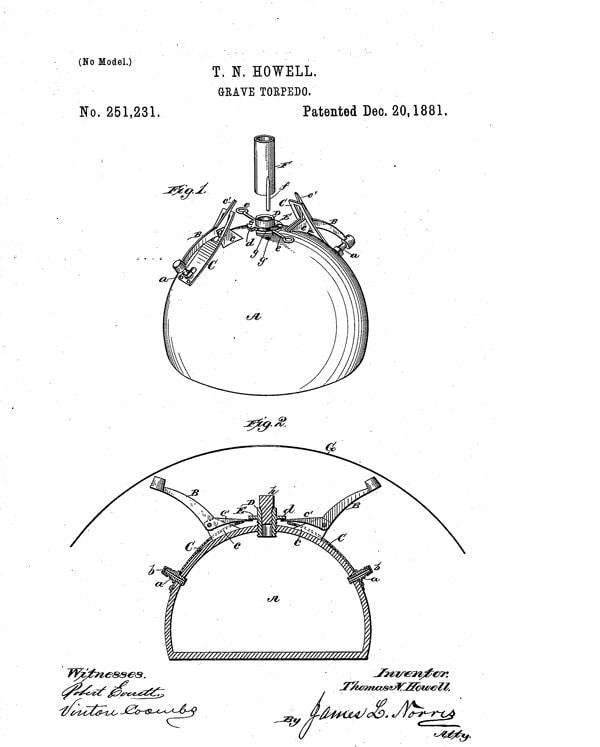 Another inventor, Thomas N Howell, perfected two different “Grave Torpedoes.” Each was more like a landmine than any firearm. Borrowing Civil War technology, Howell’s device weighed 8-pounds and carried a charge of more than .75-pound of black powder ignited by a percussion cap. Buried atop the coffin with a protective plate above the torpedo, if disturbed the metal plate would help serve as a shape charge directed right at the would-be grave robber. An advertisement for the weapon declared that it would allow one to, ““sleep well sweet angel, let no fears of ghouls disturb thy rest, for above thy shrouded form lies a torpedo, ready to make minced meat of anyone who attempts to convey you to the pickling vat.”

In 1881 at least three men were killed when one such device ignited during a late night traipse through the cemeteries near Gann in Knox County, Ohio.

These grave arms have been recently put in the spotlight with episodes of the PBS program History Detectives and Antiques Roadshow and the Spike program Auction Hunters. Prices at auction range from $950 to over $7000 for these items when they are found, depending on provenance and functionality.  They even appear online on gunbroker from time to time.

The end of the ‘Cemetery Arms Race’

Legislation such as the Pennsylvania Anatomy Act of 1883, which allowed medical experts to legally acquire unclaimed bodies, led to a direct decrease in grave robberies for cadavers.

Finally, by 1900 refrigeration, which allowed medical schools to maintain a store of bodies on hand indefinitely until needed, ended the practice of set-guns, coffin torpedoes, and other such heavy ordnance in your local cemetery. Other states enacted laws limiting or prohibiting the burial of corpses with significant jewelry, or requiring coffins to be places inside of heavy sealed vaults, further limiting incentive to rob graves.

Nevertheless, let that be a lesson to those of you that want to go around poking in old graves.  The body you leave behind may be your own.