The Destroyer Carbine and the Rise of Pistol Caliber Long Guns

Today pistol caliber carbines such as the popular Beretta CX4 Storm and the Keltec SUB 2000 are on the cutting edge of both technology and popularity. However, these modern long arms owe their basic premise to an older, funkier design — the Spanish Destroyer carbine.

Here in the U.S., we are used to each town, county and state having its own law enforcement agency. In many countries, such as Spain, there is instead a large national police force organized and equipped along lines that are more military. In Spain in the 1920s, this force was known as the Guardia Civil.

This force was armed with locally produced versions of the Winchester 1873 and 1892 lever action rifles in .44-40 that needed replacement.

At the time the preferred sidearm of the Guardia Civil, which was part of the Army, was the M1908 Bergmann and other pistols chambered in 9x23mm Largo. Likewise, the Spanish Army’s standard rifle was the 1893 Mauser. Therefore, the government put two and two together and in the arsenal town of Eibar, the Destroyer carbine was born.

The design and specs 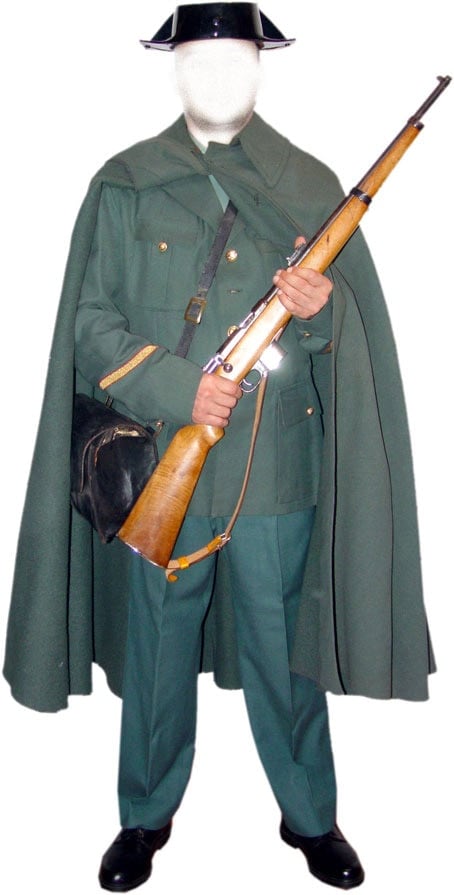 Oviedo cottage gunsmiths, akin to the many popular ‘garage gun builders’ now in the U.S., experimented with many different 9mm bolt action carbines for nearly a decade. These early designs used a bolt without locking lugs. However, the Gaztanaga Company perfected the design to the point of acceptance.

Taking the M1893 Mauser as inspiration, the Destroyer was scaled down. The receiver was made of cast metal and a stamped sheet metal magazine well was added. Two locking lugs were cast into the rear of the bolt for durability and the fact that the cartridge would head stamp directly on the bolt face. The standard detachable six and 10-shot Bergmann pistol magazines were used with the little carbine. This enabled the average Guardia Civil policeman to carry not only one type of ammunition, but also just one type of magazine for both his sidearm and longarm. Later handguns including the Campo Gripo and the Star Model A used different magazines, but still were in the same caliber.

The barrel length in the finished Type 3 carbine was 19.5-inches; overall length is 40-iches with a 14.5-inch length of pull on the military-style walnut stock. The handy carbine comes in right at six pounds in weight. In looks and feel, the Destroyer seems like a shrunken Mauser rifle to those familiar with the design.

Production began around 1921 first at the Gaztanaga works, then after 1935 at the Ayra Duria company plant, both in Eibar. While no solid information is known on production figures, judging from serial number ranges known to exist, a figure of 40-50,000 firearms produced seems likely. Production ended in 1976 and the plucky little bolt-action carbine was replaced in the 1970s by the Star Z-62 submachine gun that was capable of spitting out 9mm Largo at 550 rounds per minute. Hence, don’t pick a fight with a Spanish cop.

The firearms were issued not only to the Guardia (although some writers contend they were not and will fight you over such claims) but also to the National Police, border and customs agents, forestry guards, prison guards, factory guards, “guarderia” civilian rural guards, and even sold on the private market in Spain and abroad. No less a figure than Mitch WerBell, the founder of MAC and one of the original secret squirrels produced a few silenced Destroyer Carbines on spec for the U.S. Army’s use in Vietnam in the late 1960s. These exotic popguns had chopped down barrels and were reported to be “beefed up” to handle .38 Super ammunition.

The humble Destroyer was virtually unknown in this country until the late 1980s due to most stocks being either unserviceable or still in Spanish police armories. Once these weapons hit the surplus market however, they were imported by Century and others through the 1990s and sold for as low as $89. Most of the Destroyers that are floating around from that importation are 1950-60s vintage pieces made by Ayra Duria in 9×23 Largo. Currently surplus 9x23mm Largo is cheap and easy to find and when it is not, it is still in production by reputable manufacturers.

Some Destroyers are found chambered in 9x19mm Parabellum and are usually marked as such. It is thought that these are late model production made just for export but this cannot be confirmed. Be aware that there are several Largo guns that have been modified with a hastily applied steel chamber insert to make them shoot Parabellum rounds without marking the receiver as such so as always with a used firearm, be sure to have a gunsmith inspect your Destroyer before taking it to the range for the first time. The Largos (marked Bergmann) typically go now for about $300 while the Parabellum chambered variety fetch a tad higher. The 2012 Guns Prices by Lee lists the Destroyer in “Excellent” condition as $500, a testament to just how few are found in that grade these days.

With the low-tensile metallurgy and notoriously loose tolerances used in both construction and repair, many Destroyers found on the surplus market are in poor condition. It has often been noted that no two Destroyer firing pins or magazines are the same, as each had to be hand fitted to the firearm due to sloppy quality control. The issue of extractors breaking with no replacement parts being available in this country is legend. However, there are work arounds mentioned even for this issue for those who are interested. Today the firearm has a legion of fans in the U.S. who love it for its easy shooting, low-recoil and accuracy at targets of all size under 100-meters.

Whether the Guardia Civil used it or not.