Are AR Pistols Worth Buying?

The AR-15 pistol is a fascinating and controversial weapon.  The short barrel and lack of a stock make the gun more versatile in confined spaces.  But the power of the rifle cartridge in such a small “pistol” can be hard to handle — and the rules surrounding the existence of AR pistols are somewhat convoluted.

That’s easy.  An AR pistol is a pistol length AR-15 without a stock.  The barrel is short and there is a buffer tube where the stock would be on a rifle.

For the purposes of this discussion, I’m limiting my definition of an AR Pistol to one chambered in .223 (5.56).  There are other variants, most notably 9mm, but there is a difference between the pistol cartridge and the rifle cartridge.

I’m not trying to pick any fights with this definition.  But no one needs to make an argument for pistols chambered in 9mm.  And a 9mm AR pistol may look and function like an AR, but it has more in common with submachine guns (only not select fire).

The legal definitions are a bit more detailed.  The legal length (on the short end) for a rifle’s barrel is 16 inches.  The whole rifle must measure at least 26 inches or longer.  If the barrel is shorter, the gun is considered a short-barreled rifle, and requires some paperwork with the ATF and a $200 tax stamp.

In other words, the stock, which makes it easier to aim and control, also makes an AR a rifle.

Baffling.  But there’s more.  It is illegal to make a pistol from a rifle without a the proper documentation and a stamp.  Which means you can’t take an existing AR-15 rifle and turn it into a pistol.  The parts have to be new parts, never before assembled into a rifle.

The law needs to be completely overhauled.  But that is beyond the scope of this article.  If you aren’t familiar with the National Firearms Act and all of its nuances, I’d start at the Wikipedia page and work your way out from there.  It’s entertaining reading.

There are two answers to this question.  Traditional manufacturers have been slow to produce AR pistols.  Bushmaster makes a few.  Rock River Arms makes several (the one pictured above is their A2 model). 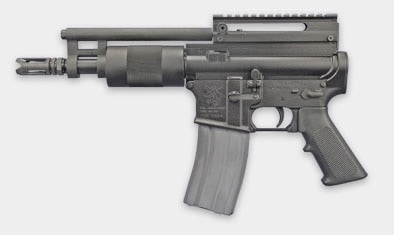 Prices for production AR pistols seem to group around the $900 mark, depending on options.

Olympic Arms makes a number of designs.  The OA-93 has a unique recoil system that eliminates the buffer tube (and makes the gun much less aesthetically appealing).

But most still seem to be built the way many AR-15s are built: from scratch.  Many of these builders share their experiences on the forums.  AR15.com has a nice selection of topics and photos.

What does an AR pistol offer?

I’m going skip over all of the normal attributes of the AR-15 rifle.  Enough has been said about the light weight, low recoil and reliability of the 5.56.  What do you get that you don’t get from a AR rifle?

Increased maneuverability.  The short barrel would be useful in urban combat situations.  That is all I can come up with.  I’m not trying to raise anyone’s hackles — I simply cannot come up with a single other benefit.

Some use their AR-15 pistols for home defense.  Short barrels are useful there, too, though I’m a dedicated shotgun man.  The September issue of Guns & Ammo has an article about hunting with the AR pistol.  In it, Dick Metcalf makes an argument for the ease of use in the woods.  Still, an AR pistol wouldn’t be my first choice.  Or my second.

For some, I would think there would be the additional benefit of being able to shoot one handed more easily, but I haven’t found any such testimonials.

The short barrel shortens the sight radius.  That makes iron sights less reliable.  The shorter barrel is harder to control, as there is less mass to the rifle (and mass eats up recoil).  The buffer tube sticking out of the end of an AR pistol is odd.  It isn’t a stock, and it can be useful as a support point or a hindrance (as it sticks way out there).

The folks at Ballistics by the Inch have put the .223 to their rigorous tests.  The results suggest a significant loss of energy as the barrel shortens.  From an 18-inch barrel to a six-inch barrel there is almost 1,000 fps that vaporizes at the muzzle. 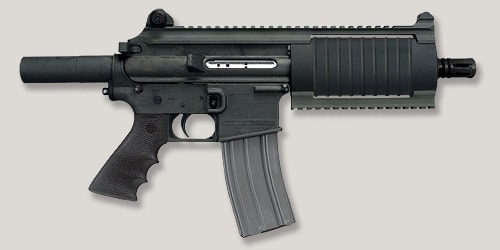 Not for me.  I can’t answer for you.  And for the countless number of AR pistol owners, the answer must be yes.  I can certainly understand the attraction of short barreled AR rifles for law enforcement applications.

The AR pistol seems, if I’m being generous, a new type of sub gun.

If I were being less generous, I would say the only reason for an AR pistol’s existence is to flaunt the law that prevents legal ownership of short-barreled rifles.  Not that that’s bad.

What about it?  Any of you have an AR Pistol yet?  Is there something I’m missing?