Capturing the essence of a rifle that has seen active service for more than a century is complex.  The Lee Enfield is, by all accounts, a solid battle rifle.  As the go-to rifle for the British Empire for the first half of the twentieth century, the Lee Enfield has seen service in every climate, every geographical region, and every type of armed conflict.

The Lee Enfield, originally developed in 1895, has seem many permutations.  The most prevalent is the Short Magazine Lee Enfield (SMLE), which came into service in 1907.  It fired the .303 British.  The rifle weighed almost nine pounds and was 44 inches long. The barrel was a touch shorter than the original (which is why they call it short), and the magazine could be fed with charger clips when the bolt was open.

The Lee Enfield was developed in an era dominated by bolt action rifles: the Gewehr 98, the Mosin Nagant, the Springfield M1903A4.  And as England geared up for war, the manufacture of the SMLE was contracted out to many different firms.

The Lee Enfields had detachable magazines–something we take this for granted these days. 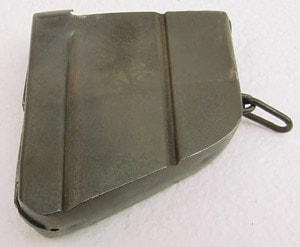 Yet it was much harder to get a replacement magazine to a soldier in Africa or India than it is today.  As such, some early magazines were connected to the rifles with chain.

This rifle has been slowly evolving for more than a hundred years.  As such, the variations are too numerous to note.  But there are more than 17 million out there, somewhere.

There’s a lot of excess wood on a Lee Enfield.  We understand accuracy differently now, and try to keep barrels from touching anything.  But the wood served a purpose.  Barrels get hot, especially in situations where rounds are fired repeatedly, quickly.  And the wood absorbs much of the impact that can bend barrels.

The real story of the Lee Enfield comes in its military use.  The gun offered high magazine capacity (10 rounds), a rapid rate of fire, and good accuracy.  The .303 round is a heavy, fast round.  The SMLE was adopted by many of the countries that had ties, colonial or otherwise, to Britain.  And some, like Canada and India, have yet to give it up.

Most Americans now see the Lee Enfield as a bit of a dinosaur.  The rounds were heavy, which made them cumbersome.  The rifle wasn’t light.  It was long.  The bolt action required practice and skilled manipulation.

The Lee Enfield, like the Springfield, the Garand, and even the M14, was an old-school battle rifle.  I’m not looking at the action in this comparison.  There are obvious differences.  But all of these guns, for service with general infantry troops, would be made obsolete by new developments of combat rifles.  Still, the Lee Enfield spanned the gap between black powder rifles in the late 19th century and the combat rifles that proliferated after WWII.  That’s a huge gap.  Not even the Springfield M1903 can make that claim (though it comes close).

But it worked.  The SMLE continues to work.  In practice, the magazine wasn’t too easily damaged or lost (and now magazines are ubiquitous).  The long range accuracy of the weapon made it popular in areas where there were long sight distances.  The .303 killed well enough in the first world war that the British brought it with them to the second.

And when new conflicts with new demands arose, the British simply modified their rifle.  Need a shorter, lighter version of the gun suited for long marches in jungle environments?  No problem.  Jungle Carbine.  The .303 will cut through brush quite well.

As a representation of this era, the Lee Enfield shows up in lots of pop culture.  The gun has been featured in a long list of movies and television shows, and even pops up in video games, like Call of Duty 2.

The Lee Enfield and the .303 are still used for hunting in New Zealand and Australia, and many other places touched by the British Empire.  The .303 offers excellent range and terminal ballistics.  And serviceable SMLEs are easy enough to come by.

But they’re not all .303 anymore.  The SMLE is frequently converted for use as a shotgun.  In many places where there are prohibitions against owning guns that shoot rounds designed for military use, a .410 remains legal.

That it is still in military service today speaks to its effectiveness.  It is currently being used in two main roles.  Some SMLEs are still in active service in countries that lack the resources for modern equipment.  Other modified SMLEs are being used as sniper rifles.  Most of these have been converted to .308. 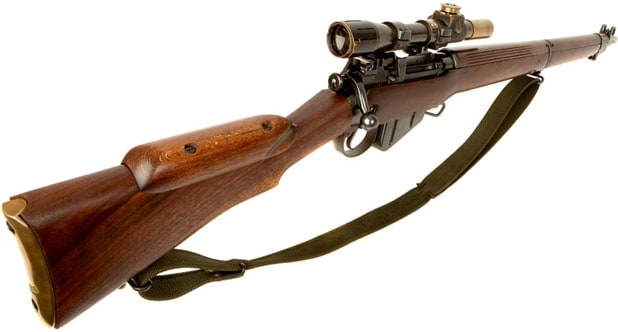 The Lee Enfield is a solid rifle.  It is clearly effective and versatile.

But when I see a 1903 Springfield, or even a Garand, I see a piece of history.  Lots of people, all across the planet, see a SMLE and see their gun.  Still.  And this won’t change for a long time to come.