The Full Auto Enfield Rifles: The Charlton, the Electrolux and the Rieder

Odds are, if you speak gun, you’ve come across an Enfield rifle at least once in your life. With that being said, you have probably never come across a full-auto Enfield unless you wore a uniform in 1940s. Let’s have a look.

The Lee-Metford and later the Short-Magazine Lee Enfield (SMLE) in a multitude of variants was the standard British military rifle for nearly 70-years. It served through two World Wars and dozens of smaller conflicts on half as many continents. When World War II erupted in 1939, her Commonwealth allies including New Zealand, Australia, and South Africa joined Britain. Rapid and extensive mobilization saw these Allies ship most of their troops and arms to Europe and North Africa by 1940 to fight the Germans and Italians. Then, in December 1941, the Empire of Japan entered the war.

With the standard light machineguns of the Commonwealth armies, the Bren gun and Lewis rifle, available in few numbers, there was an emergency need for .303-caliber automatics. Interestingly enough, two different inventors, continents apart, came to the same conclusion at roughly the same time: convert the Enfield to full auto.

Phillip Charlton, a British-born NZ automobile engineer, hit on a concept in 1918 to add a gas cylinder on the right-hand side of the 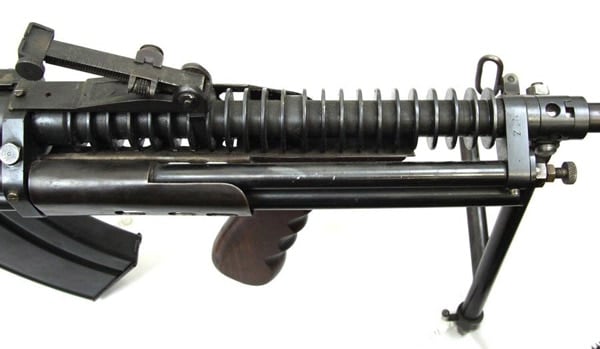 Enfield bolt-action rifle’s receiver but nothing came of the idea. The barrel was ported and fed a long-stroke piston attached to a cam back in the modified bolt. When the rifle fired, the gas forced the piston back, which actuated the cam, both ejecting the spent casing and then ramming forward back into battery. This gave the rifle a rate of fire of about 700-round per minute cyclic, which of course was limited to the capacity of either the standard 10-round SMLE or optional 30-round Bren magazine. This was about as fast as the modern day M14-rifle. The rifle weighed some 17.6-pounds once converted, including the weight of the bipod and modified grips to help control the weapon.

Dusting off his old design, he tweaked it, added a select-fire switch, and patented it in November 1941. Tests were positive and by early 1942 the Charlton was ordered into production.

While nearly 30,000 of these weapons were envisioned at first, only some 1500-2000 of these weapons (accounts vary) were converted from old Lee-Metford and then-current SMLE rifles at the Charlton Motor Workshops in Hastings, New Zealand. Quality control was reported to be an issue and the production weapons were unpopular. Issued mainly to local Home Guards preparing for a possible Japanese invasion, they were collected and stored after World War 2.

An unexplained fire at the armory destroyed almost all of the weapons. 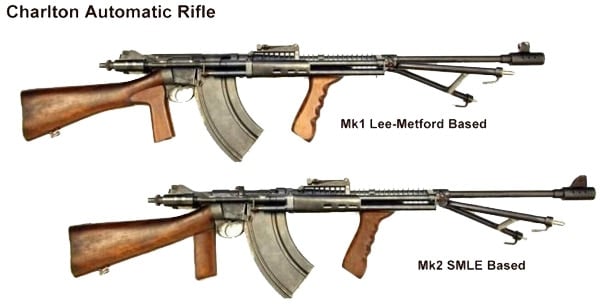 A rough derivative of the Charlton, known as the Howell Automatic Rifle, was experimentally used in Great Britain as an anti-aircraft weapon but was impossible to aim and control. Yet another design, the Elkins Automatic Rifle, never made it off the drawing board.

Australia took Charlton’s design and produced their own local version using good old Australian made Lithgow arms SMLE Mk III* rifles for their conversion. The Electrolux Vacuum cleaner company of Melbourne converted unknown amounts of these rifles—among refrigerators and floor polishers, the Electrolux machine gun came off the lines. Estimates as high as 4,000 made are mentioned but these records cannot be reconciled.  Although the Electrolux had the same action as the Charlton, it was produced without a forward grip or bipod.

In South Africa, post office employee and WWI vet Mr. H. J. R. Rieder asked the local military establishment in 1941 to borrow a standard Enfield rifle so he could convert it to a machinegun of his own design. Working from his home (using a workshop “silencer” so he didn’t disturb his neighbors), Rieder converted said loaned rifle with a 2.5-pound attachment that captured the gas of the round fired to automatically cycle a modified bolt.  By mid-1942, after just a one-year development period by Mr. Rieder and an Army sergeant loaned to him as an assistant, some 18 modified rifles were ready for testing. Initial trials at the Cape Town Castle were a success with the reservation that the barrels overheated after 100 rounds cyclic. A few were sent overseas for field-testing but the design was never put into production as Lend Lease US-made weapons became increasingly available.

Are there any out there?

Sadly, almost all of these conversions have been destroyed in the past 70 years. A few exist in arms museums overseas but none are known to be on display in the US. However, keep in mind that the nature of these conversions was not permanent and these rifles could be (and sometimes were) restored to their original configuration. At least 17 of the Rieder rifles are still unaccounted for and were possibly converted back by local unit armorers and later sold as surplus. Therefore, it is not impossible to imagine the old SMLE in your safe may have once been an extremely rare machinegun.