The Belgian Rattlesnake: Why the Lewis Gun was Feared and Revered for Three Decades

The Lewis Gun was the child of a world torn apart by warfare.  What do you know about the first machine gun ever to be fired from an aircraft?

This is a weapon that functioned reliably under horrible trench warfare conditions in The Great War, was mounted to aircraft and Navy vessels through World War II, earned a fearsome nickname, and saw service with well over a dozen countries, yet seems largely forgotten today.  No more.

The Lewis Automatic Machine Gun was gas operated and capable of firing 500 to 600 rounds per minute.  It was chambered first in .303 British, then in .30-06 Springfield, both of which produced muzzle velocities around 2500 to 2600 fps. Lesser numbers were later chambered in 7.92×57 Mauser.  At a mere 28-pounds, the Lewis Gun weighed only half as much as its counterparts.  It was known as much more portable than say, the Vickers or Maxim, as it could easily be carried and operated by a single soldier. This light machine gun was easily recognized both by the large aluminum cooling shroud encasing the barrel as well as its top-mounted drum pan magazine, which could hold either 47 or 97 rounds and stood in stark contrast to all other belt fed machine guns of the time. 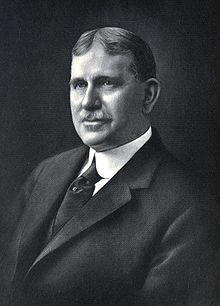 Invented in 1911 by then U.S. Army Col. Isaac Newton Lewis, the Lewis Gun drew heavily from earlier designs by Samuel McLean.  In spite of the weapon’s ties to the Army, it was never warmly embraced by such.  You see, Newton and the U.S. Chief of the Ordnance Department, Gen. William Crozier, suffered from some sort of political-personal differences.  Thus it came to be that what could have been known as one of the most portable, light, ingenious machine guns of its time never got its just due in the great US of A.

After unsuccessfully pitching his brainchild, Lewis grew frustrated in his attempts to persuade the Army to adopt the design to which he had dedicated his life, and so resigned his Army commission to pursue production abroad.  By 1913, Lewis had found a warm home in Belgium where he started the Armes Automatique Company in Liege.  There, he commenced commercial production of what he called the Lewis Automatic Machine Gun.  Concurrently, Lewis was also in contact with the Birmingham Small Arms Company (BSA) in Great Britain, who expressed interest in his weapon.

In that same year of 1913, the Belgian Army officially adopted his design.  They are known as the first parents to this .303 British round.  It is said that when Germans first encountered the Lewis Gun while in combat with the Belgians in 1914, they were in such fear of the Lewis gun’s maneuverability, rapid and accurate fire, it came to be known as the “Belgian Rattlesnake.”

Shortly afterwards, BSA acquired a license from Lewis to manufacture the Lewis Machine Gun in the UK, which made him a wealthy man through the incoming royalties.

With the beginning of WWI, demand for this portable machine gun spiked, and BSA began mass production of what they called the Model 1914.  Thus began a long, and well-traveled history of Col. Lewis’s vision for a new weapon which filled a niche in a world at war.

The most noticeable feature of Lewis’ gun was the aluminum barrel shroud, which provided forced air draft cooling. While this casing was meant to use the muzzle blast to pull air into the gun for cooling, many doubted its usefulness and speculated that perhaps its sole purpose was one of appearance, as the gun functioned flawlessly in the field without it.  Many of the shrouds were removed, especially on those aircraft mounted guns, a tactic which also saved several pounds from the weight of the gun.

The gun featured raised blade and tangent leaf sights, a front-mounted folding bipod, a wooden rear stock that could be replaced by a handle for maneuverability, and was listed to have an effective range of 800 meters and a maximum range of 3,200 meters. 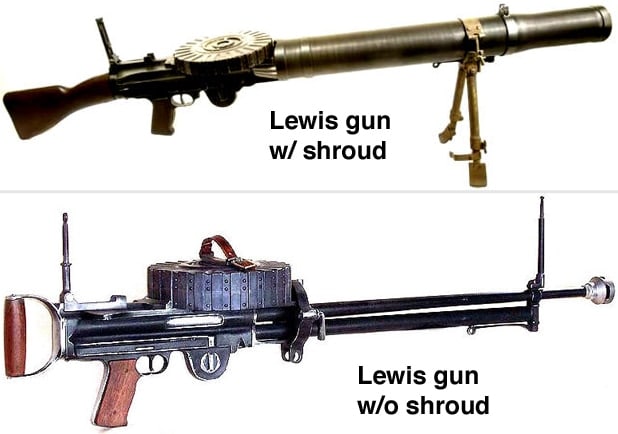 Though Lewis’ machine gun remained significantly more expensive to manufacture than the Vickers, it could be put together twice as fast.  In addition, while the Vickers required a water siphon cooling tank and the less-compact belts of ammo, Lewis guns were more mobile and versatile given the weight, air cooling system, and 97-round drum magazines. Lewis’ adjustable clock-type recoil spring allowed the gun’s firing rate to be regulated.  Though it was capable of 500 to 600 rounds per minute, shorter bursts of fire were most common.

Following its successful debuts in Belgium and Britain in early 1917, both the U.S. Navy and Marine Corps adopted the M1917 Lewis Gun, manufactured by Savage Arms Company and chambered in .30-06 Springfield. 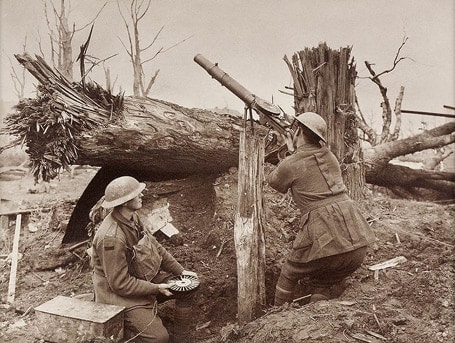 In spite of this, the U.S. Army never officially adopted the widely available Lewis Gun for infantry use, instead waiting on availability of the Browning Automatic Rifle, which did not reach front lines en masse until late 1918.  Whether this is due to the rift between the two men can never really be proven.  However, the Navy and Marines continued to use the .30-06 M1917 into WWII, and the U.S. Coast Guard also mounted many Lewis guns to its vessels.

Shortly thereafter, the Russian Empire purchased 10,000 Lewis Guns from the British and another 10,000 from the U.S., though it is not clear how many were actually delivered. The Germans were so pleased to capture Lewis Guns in the field that they wrote a special manual and included instructions for its operation as part of their machine gun crew training, using the gun under the name MG137e.  Cloning the Lewis Gun, the Japanese launched its Type 92 chambered in 7.7mm rimmed, a round very similar to the .303 British.

Because of its portability, as well as the fact the cooling shroud could be removed, the Lewis gun found regular use as an aviation-mounted machine gun.  In fact, the Lewis Gun will forever be known as the first machine gun successfully fired from an airplane. 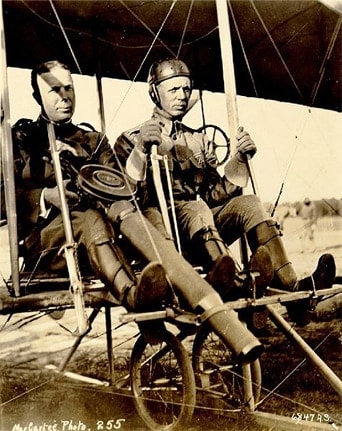 In June 1912, Capt. Charles Chandler of the U.S. Army fired a prototype Lewis Gun from a Wright Model B Flyer.

Many French and British aircraft during WWI were fitted with the Lewis gun and its self-contained 97-round magazines.   They were also loaded with incendiary rounds and used as balloon-busters targeting enemy dirigibles.

Not only was the Lewis gun used as an aircraft mounted weapon, it also saw expanded service as an anti-aircraft weapon during World War II.  The Brits found it second to none at bringing down low-flying enemy aircraft, accounting for more such takedowns than any other British anti-aircraft gun of its time.

Downfall of the Lewis

The Lewis gun reached its peak of service during WWI, though it was said to be used by forces operating against the United Nations in the Korean, First Indochina and Vietnam wars.  By the time the end of WWII had rolled around, the Brits supplanted the Lewis with the Bren Gun for infantry use and the Vickers for airborne.  American forces kept the -06 caliber Lewis in service throughout WWII, though its popularity faded after the BAR became readily available.

Though the heydays of the Lewis ended long ago, bits of Col. Lewis’s insightful designs—including the clockwork spring and self-contained drum pan mag—went on to drive the development of other weapons, including the German FG42 and, consequently, the M60.

By the time the final Lewis gun was produced in 1946, around 150,000 of them had been put into circulation.   Not bad for a gun that, without the belief and dedication of its maker, may not have ever been.