The HVLAR, “High Volume Light Automatic Rifle” by Ferfrans was showcased at this year’s 2012 Soldier Equipment and Technology Expo at Ft. Bragg, and it certainly looks impressive. Introduced a little over a year ago, it is already seeing military adoption outside of the U.S. as well as domestic agencies in California and Florida, and is being considered for Army service for select roles.

The purpose of the HVLAR is to merge M4 accuracy, weight and maneuverability with the reliability of a piston-driven light machine gun when being used for large-volume sustained fire. For this very reason the Marines have begun fielding the M27 IAR, a similar rifle in concept, to partially replace the M249 SAW.

Weighing in at almost half of what an M249 does, 9.5 pounds versus 17, it’s possible to rip through 60 rounds easily, even one-handed. It uses standard AR-15/M16/M4/STANAG magazines, as it’s built on an AR-pattern lower.

Part of that is the weight, but Ferfrans has also developed a new fire control group with what they call the Delayed Sear Activation System, or DSAS. This brings the cyclic rate of the gun from as high as 970 rounds per minute (RPM) to a much more manageable 650. This makes it possible to fire controlled bursts of two or three shots without much effort.

This is the same DSAS used in several of their other rifles, such as the SOAR (Special Operations Assault Rifle) and SOAR P, direct impingement and piston-driven rifles, respectively, as well as their PDW-style SCW, “Super-Compact Weapon.” In addition to lowering the cyclic rate, the DSAS also slows down the bolt carrier group, reducing stress in the upper receiver. You can see that the recoil and muzzle climb are easy to manage even for small-framed shooters.

It doesn’t surprise us to hear that the U.S. Army is interested in heavy-duty rifles to replace the M249, as the Marines are doing. It is currently undergoing testing and evaluation. While the Army has stated in the past that they don’t intend to replace the machine gun on a squad level, there are many Army units that may have more interest in something else.

“We are not considering adopting an auto rifle for the infantry squad,” said Col. Robert Radcliffe, director of the Infantry Center’s Directorate of Combat Developments at Fort Benning, Ga.

There are certainly benefits in addition to maneuverability. The HVLAR is mostly parts-compatible with M4s, not just magazines, and it uses the same manual of arms. It also looks a lot like an M4, even with the 16-inch barrel and modified handguard that mounts to the flattop rail for extra leverage. This means that light machine gunners stand out less. 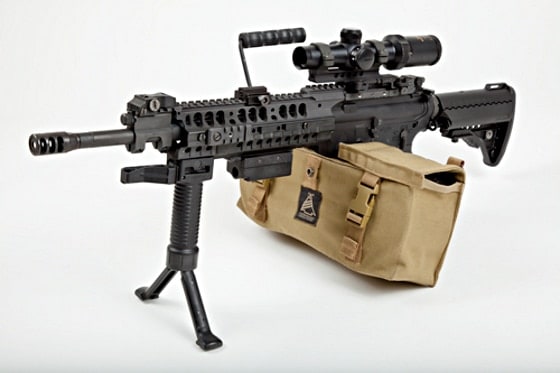 But even with the lower rate of fire and short-stroke gas piston operation, there’s no getting around the fact that guns that fire from a closed bolt heat, and overheat, faster than guns that fire from an open bolt. It will be interesting to see what’s in the HVLAR’s future.

Ferfrans is an American company that manufactures in the Philippines, and their rifles are in service with the Philippine national police and Special Action Forces in addition to the Clay County FL SWAT and LAPD Chief of Police Protection Unit. While their bread and butter is military and law enforcement business, they have stated their intention to develop semi-automatic versions of their rifles for commercial sale.