“Ten Shots Quick!”  A pistol with catchy slogans and trademark looks, the Savage Model 1907 nearly became the most popular pistol in America.  Though Savage has done things right for more than a hundred years, their foray into the pistol market is largely forgotten.

Today, the Model 1907 may be seen more as a half-retro/half art-deco antique than a functional piece of firearms history, but its creators aspired for so much more.

In 1906, the U.S. military decided that it wanted to replace the sidearms it currently relied on—revolvers that were either lacking in knockdown power or capacity—with something more up-to-date. Thus came a call from the government, who sent out a list of standards, for all gun manufacturers to submit designs.  And numerous companies—including Smith & Wesson and Luger—submitted to the contest, but only the Colt 1911 and Savage offerings made it to the final round. 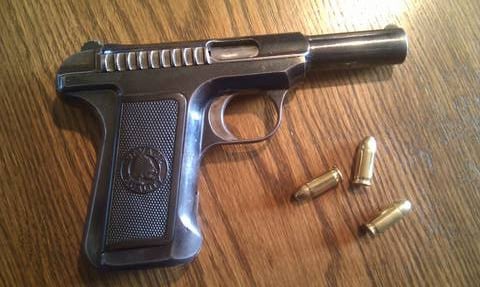 The Model 1907 Savage Calibre 45 ACP was an Elbert Searle design.  His patent .45 semi-auto had only 34 total parts, wooden grips, an ambidextrous magazine release, grip safety, loaded chamber indicator, and held eight rounds in the magazine versus Colt’s seven.  The military-inspired Savage also had a pivoting lanyard loop that retracted into the magazine well when not in use.

Both guns were put through the paces shooting thousands of rounds in both rapid-fire tests and heavy Army field trials.  And both versions were sent back to the respective makers for several re-workings over this course.  Long story short, the Colt held up better during field tests and in turn won the contract, which is probably why we run across very few folks who know about Savage’s pistols today.  However, it’s interesting to imagine how the face of today’s gun designs might differ given an opposite result at those early Army pistol trials.

Though the .45 military version of the Savage pistol floundered, the civilian market was ripe for a small, easily wielded pistol. And with a few modifications, Savage had itself a viable product.

From 1907 to 1913 the gun was available solely in .32 ACP, but at the end of the production run in 1920 Savage released a .380-model.  Despite Savage’s attempts to popularize the additional caliber, its .32 was largely more popular.

Compared to the heft of the original 1911 and other “pocket” arms then available, Savage’s baby weighs a svelte 19 ounces with a 3.75-inch barrel. Overall length is 6.5 inches with thickness just under an inch.  Its detachable magazine held 9 to 10 rounds, depending on caliber, and utilizes what Searle called a “delayed” blowback action. 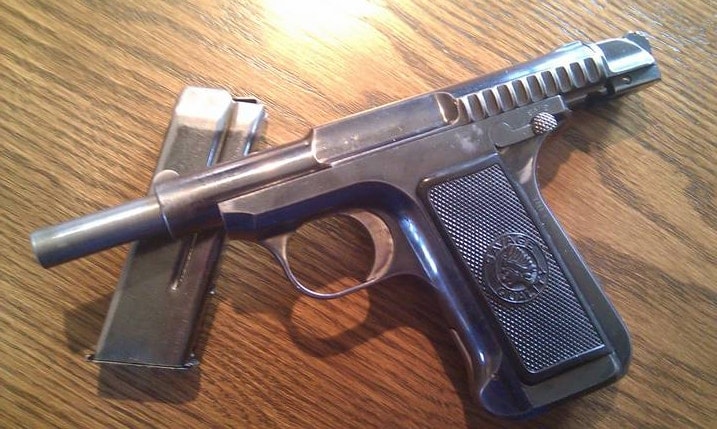 Innovatively, the Model 1907 contains neither flat springs, nor—surprisingly—a single screw.  The grips, in fact, just snapped into place.  In addition, the Model 1907 is often erroneously referred to as the 1905 because Searle’s patent date “Nov. 21, 1905” is stamped into the top slide. By the time production ceased in 1928, well over 230,000 Model 1907’s had hit the market.

Given Savage’s failure to win the Army contract, it had turned its focus solely to the civilian market.  However, between 1915 to 1917, the French military found themselves terribly short of sidearms and contracted with Savage for more than 40,000 .32 ACP units. These military contract pistols are easily recognized by the presence of a loaded chamber indicator, custom grips and a lanyard ring.

(Note: Lanyard rings were not available on civilian pistols, though it appears some were crudely added later in an attempt to increase the value which are found with the much more rare French models.)

Following the French purchase around the time of the Great War, Portugal also ordered 1,200 pistols in the same configuration as those of France.  The Portugese versions are also easily recognizable by their grips, which feature Portugal’s coat of arms.  There is significant value here too, with examples selling over a grand, especially if they come with the original leather holster.

In addition to these military variations, Savage created several other versions over the years.  Along with its 1912 re-design, Savage produced a Model 1915 hammerless, which was not all that different save its shrouded cocking lever and grip safety.

When Savage Arms dissolved before rebuilding itself as the Savage Arms Corporation, its earlier design remained, but several changes were made and given the name Model 1917.  With its larger and flared frame, the grips then required a retaining screw.  The Model 1907’s classic ten large grip serrations were replaced with 27 slimmer, less aggressive ones.  The hammer was extended in length, and the Model 1917 had more of a matte finish than its predecessor.  Savage made over 40,000 in this configuration.

One of the most charming and interesting aspects of the Savage pistols was the catchy advertising that accompanied them.  Savage’s marketing department pulled no punches with plugs immediately appealing to housewives, vest-pocket carriers and adorers of Wild West heroes. They even have Bat Masterson saying, “A tenderfoot with a Savage automatic and the nerve to stand his ground, could have run the worst six-shooter man, the West ever knew, right off the range.”

At the time war was still occupied the minds of the public and Savage had an ace in their proverbial pocket—Savage Arms had been at the front lines with other weapons including the Lewis Machine Gun.  Savage even marketed the pistol in its 1909 Arms Catalog, with a grandiose list of ten reasons this little pistol was superior.

The list includes traits that are now treated as the norm for most pistols with things like high capacity, simplicity, balance, compactness, fewer components, ease of use, ergonomics, safety and accuracy. 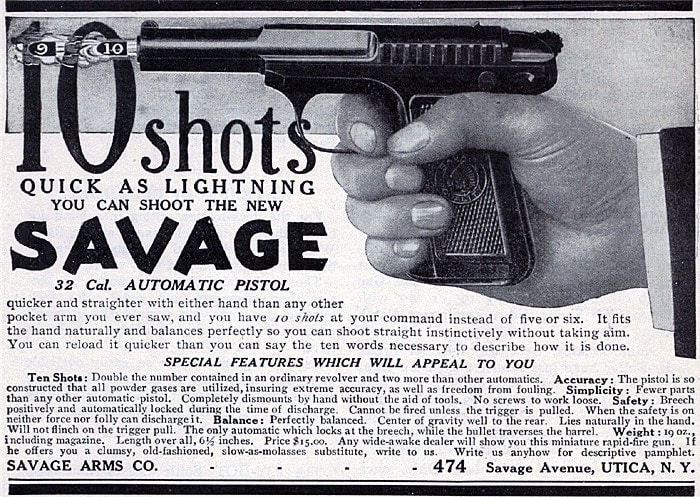 Whether the Savage ads are effective or offensive by today’s reader, they served their place in making the Model 1907 a success.

I acquired a standard Model 1907 in .32 caliber a few years back because I liked the mythos behind the Savage pistols and the gun itself.  To its credit, my Savage 1907 has documentation of changing hands a half-dozen times and has weathered over the years. Given its age and somewhat rudimentary sights, my Model 1907 still shoots groups the size of a coffee cup at around 25 feet. 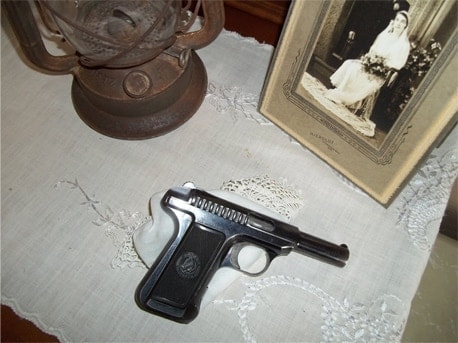 And Savage wasn’t lying in its ads. The gun is indeed very well balanced, reliable and ate up three different brands of ammo without a thought. I feel a little bad tucking it in the gun safe when it looks like this artsy-style pistol should hang—framed and lighted—on an everday gun museum wall as a testament to times past.

Though there is certainly no great monetary value in collecting standard model 1907s, Savage was really light years ahead of its time with its design.  Although it was built a hundred years ago, it could feasibly make a stand against some of the carry guns of today.  One wonders what Savage would introduce to the CCW market today.  Bear in mind that the Model 1907—along with the Colt 1911—was trying to break into an American market previously dominated by well-loved wheel-guns; yet, Savage’s 1907 remained the best selling pocket pistol through the start of WWI.  Even though Savage lost its battle with Colt and will never be as popular as the 1911 platform, it nonetheless remains part of our firearms history.