You hear words like enormous, huge, immense, monstrous, mammoth, and colossal, but they are just words until you have a Magnum Research BFR revolver in your hands.  This .45-70 buffalo gun-sized revolver is so big it looks like a prop in a science fiction movie (it was featured in the flick Looper), but it also has the niche following only a serious lead-slinger can command. 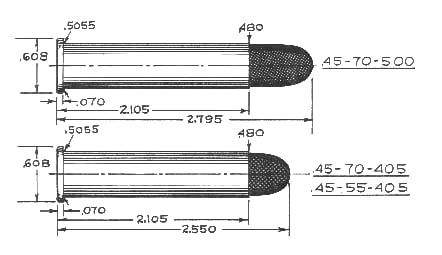 is offered in multiple flavors, the fan favorites being 300-500 grains, which deliver an amazing amount of muzzle energy. Better yet, the old Government round was initially designed for guns that were nothing more than converted muskets so it generates very low chamber pressure for such a large cartridge, typically around 25,000 psi. Compare this to the 50,000-psi that the .454 Casull generates and you see the advantage of having this round for a legitimate hand cannon. Other very large handguns calibers, such as .500 S&W, have fewer and often more expensive loadings in comparison.

Design of the BFR

Magnum Research, long known for their Desert Eagle series of large magnum sized semi-auto pistols, began work on a giant revolver in 1998. This revolver, a single-action reminiscent of the old Remington

New Army but stretched and modified for the almost three-inch long .45-70 round was something different. A 10-inch barrel gave the wheel gun a 17.5-inch overall length. Tipping the scales at 4.7-pounds, it was not meant to be fired from the off-hand or by those with a weak wrist. However, this weight allowed the huge revolver to recoil less than any .44 Magnum that weighs under 3-pounds. Five rounds could be carried in the cylinder and loaded / unloaded from the gate at the rear of the right hand-side. Introduced to the press in 1999, it was billed the BFR, with the initials up to the public’s interpretation.

Since its inception, many well-known revolver manufactures have taken to producing ultra-large

The company bills it as “the most powerful production single action gun made.” Initially just offered in .45-70, Magnum Research (now owned by Kahr Arms) offers it in .30-30 Win, .500 S&W (ironically), .444 Marlin, .475 Linebaugh, and others to suit the desires of their customers. BFR’s sold by MRI before 12/31/03 are not drilled and tapped for scopes but those sold since then are and ship with a Weaver-type scope mount. They also offer the firearm in a number of barrel and cylinder lengths. The MSRP typically run about $900 while used versions are closer to $750. 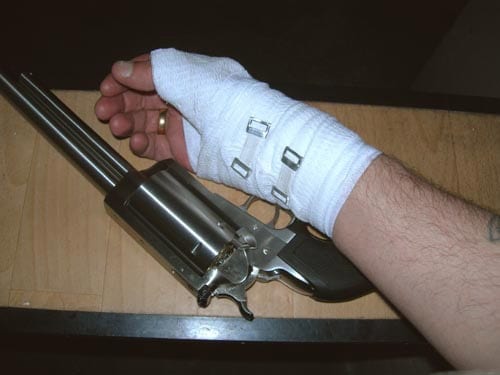 A firm grip and padded gloves can prevent injury from the Magnum Research BFR’s stout recoil.

this revolver serious enough.  Accordingly, it is very important that shooters bring a proper stance and grip to this firearm. Recoil is stout but not impossible and Magnum Research has made every effort to install huge He-man type grips to help.  Padded shooting gloves are recommended by those BFR-owners who speak from experience and for those who still find the muzzle flip or recoil to be unacceptable, there are always hand loads or low-powder cowboy action style black powder rounds.

Stout recoil would seemingly prohibit the acrobatic shooting seen with the revolver in the new Sci-Fi movie Looper, but that’s not to say the gun missed the mark in terms of aesthetic (check out the video below to see how they chose and developed stunts with the MRI BFR for the movie; fun starts about the 40 second mark).  As a side note, hand loading your brass on .45-70 is always a good idea as a 20-round box of your typical full-power hunting rounds run about $50.