While World War II stretched across Europe, one of the hallmark battle tactics of the 1939-41 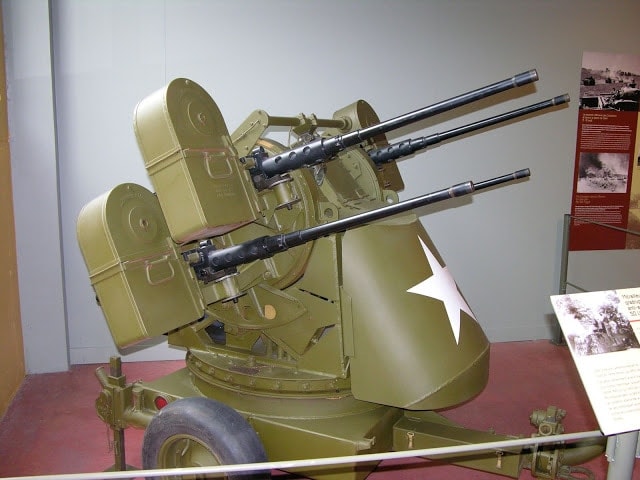 Nazi Blitzkrieg were close attacks by low-flying aircraft. German fighter planes would fire machineguns just a few hundred feet off the ground in strafing runs, all the while flying as fast as they could in an effort to (and too often successfully) avoiding return fire. In most cases these Messerschmitt planes carried 13 mm (.51 in) synchronized MG 131 machine guns or 20mm cannon / .30-caliber rifle combos and light auto weapons of the ground pounders had a difficult time breaking these attacks up. What was needed was something that had some more kick to it, and the W. L. Maxson Corporation of New York aimed to provide it.

and could elevate to near vertical and depress slightly less than horizontally. Two 6-volt batteries that were recharged by a small Briggs and Stratton gas engine coupled to a generator fed the electric motor on the mount. To this mount, they added a central gunner’s seat of luxurious canvas, a large spiderweb-type graduated sight, and four Browning heavy machineguns arranged in a pair on each side.

Maxson had previously designed a two-gun mount for the Army, dubbed the M33. They liked it but if two guns were good, the logic went four would be great. To feed this bullet-spitting quartet, a large tombstone-shaped hopper held two hundred rounds of linked fifty-caliber ammunition. With each gun firing some 550-rounds per minute, the rate of fire for the mount was a punishing 2200-rounds per minute.

The M45C mount, fully equipped with 800 rounds of ammunition, armor shield for the gunner, oil, fuel for the engine, and all accessories was 2400-pounds.  This size fit in the rear of a large truck, halftrack, or could be towed alone on a small M20-style trailer.

Designed to shoot down low-flying (under 2000-feet) aircraft coming into strafe, the quad mounted 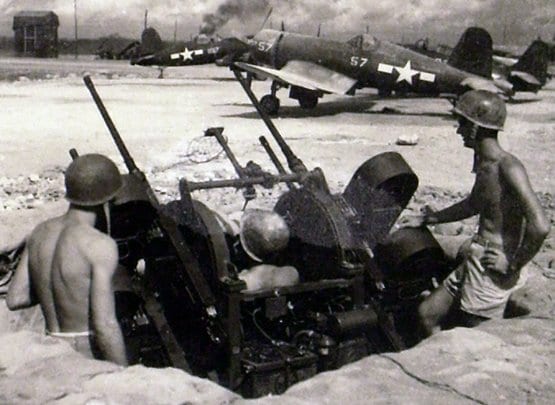 Marines prepare for a German Messerschmitt attack with a Maxson M45 Quadmount.

fifties were a thing of joy to the many ally infantrymen who found themselves painfully outgunned while defending ground posts. The mounts made their debut guarding ammo-dumps and airfields, fuel supply areas and operational headquarters. In 1944 Western Europe, the guns were responsible for shooting down as many as a third of the aircraft that the Germans lost in combat. But it was the gun’s use against enemy foot soldiers that earned it the nickname, ‘meat-chopper’. In close combat against a Mauser or Arisaka armed Axis infantryman, the heavy 50-caliber rounds not only outdistanced the bad guys by more than a thousand yards, but also could punch through cover and concealment. The M45 was brought up whenever a sniper was found hidden in a tree…to cut down the tree. 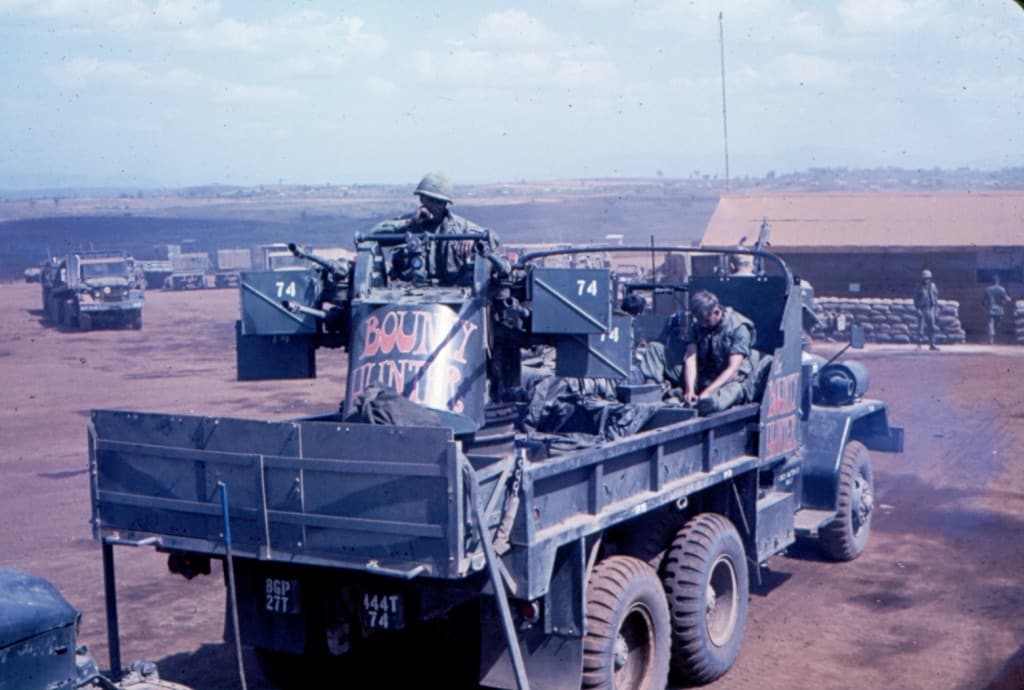 1800-rounds per minute, German half-tracks and Opels towed it into combat.  Even though it used a smaller .50-caliber (12.7mm) round, the Maxson was more effective; it had 800 rounds ready to fire whereas the German Flak 30 only had 80 rounds at the ready before a team of eight gunners had to reload it. The Maxson also weighed almost half as much and could be manned by a single soldier in combat (until the ammunition ran out.)

Even after the big war ended in 1945, the guns still served on in Korea and Vietnam. It was in Vietnam that they were pressed into service to ride shotgun in convoys along Viet Cong roads. Though retired for good from the US military in the 1970s, the meat chopper is still seen around the world in places like Brazil, Turkey, and Argentina that continue to use the set up.

These guns are preserved around the world in museums. A few are in the hands of private collectors and 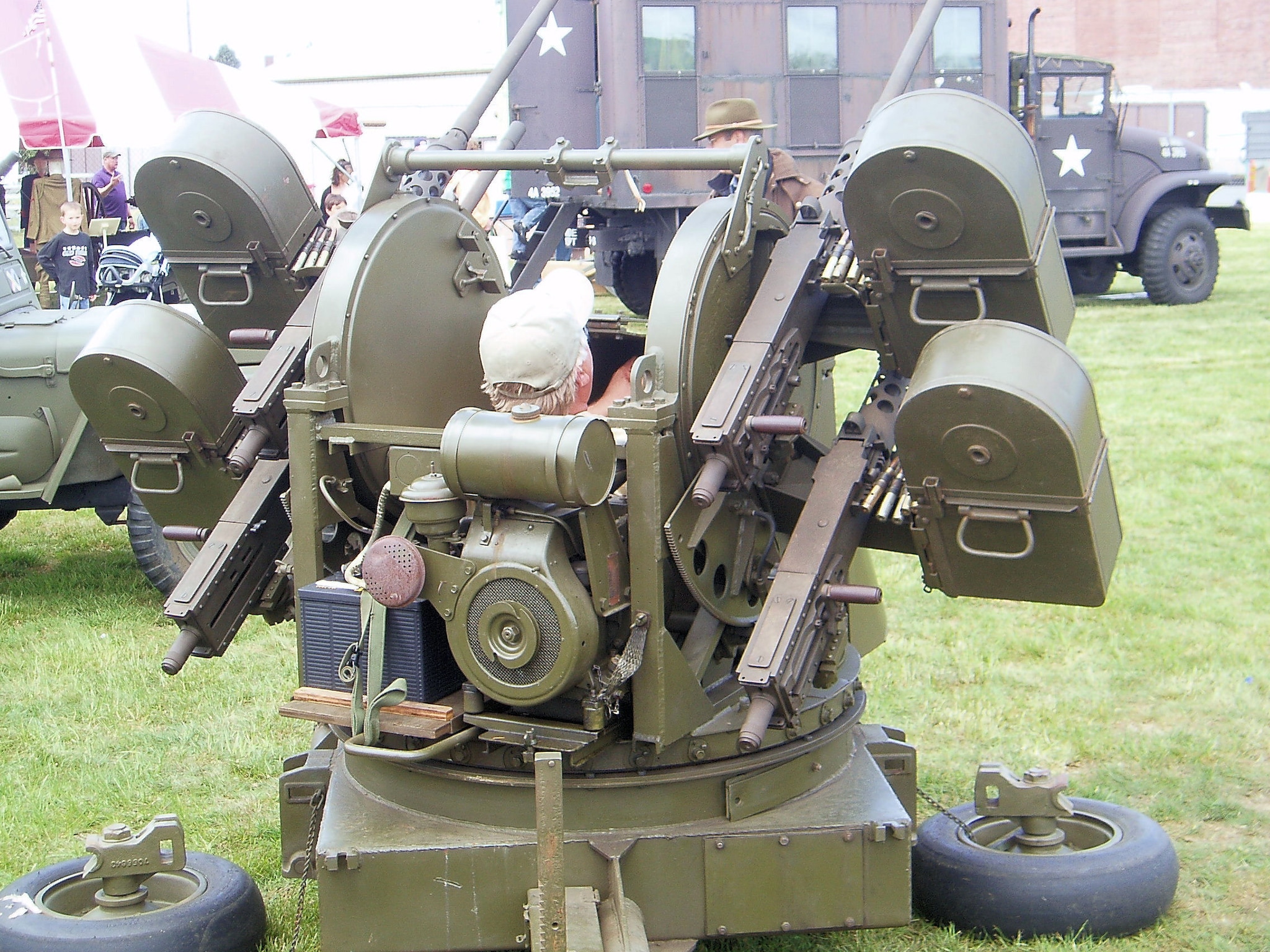 Maxson M45 quadmount examples can fetch over $100,000 on the collectors’ market.

often seen at military vehicle shows and full-auto shoots from time to time. If you are looking for your own, they can be had, if you have enough scratch. Actual working mounts, (without the guns) surface from time to time for around the $6500 price range “owned by a little old lady who only shot down ME-109’s on Sundays” and full-up versions with four active M2 Brownings for closer to $125,000. If semi-auto only Brownings are substituted the price comes down to closer to $40K, and if dummy guns are used you can outfit your own for about the price of a VW Jetta.

Still, if you really want to outfit your Saving Private Ryan load out, or have a pesky low-flying Zero in the neighborhood, the meat chopper should be on your ‘to acquire’ list.