6 Rifles That Were Ahead of Their time

Literally thousands of firearms have been designed over the past several centuries. Most of these guns are simple improvements or copies of existing arms but every so often a gun will come along that is so visionary, so head of its time, that it permanently alters gun designers understanding small arms.

These six rifles are virtual unknowns even among diehard collectors but their impact on firearms development is seen every day.

In 1770, Patrick Ferguson was the kind of military man who was a maverick. While the armies of his day fought in rigid lines of massed troops firing slow-loading and inaccurate muskets in volleys, he advocated for long ranged accurate rifles used by small groups of light infantry with interlocking cover and fields of fire. 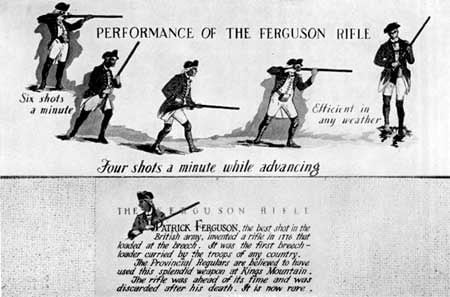 Ferguson Rifle proudly boasts a rate of fire of six shots per minute (four when advancing).

Today his tactics are used by every modern army of this day. His rifle design, known after him, was breechloading rather than muzzleloading and could be fired twice as fast as other rifles of the day. Whereas most smoothbore muskets were highly inaccurate over 100-yards, Ferguson’s rifled-barrel breechloader was capable of making aimed shots to 300-yards and beyond. Only 100 rifles were ever made and American militia killed Ferguson himself during the Revolutionary War, after he passed up taking a shot at George Washington. Nevertheless these expensive (four times as much as a Brown Bess musket) guns were the first military sniper rifles.

In 1854, three guys by the name of Horace, Daniel, and Oliver came together in Norwich Connecticut with some prototypes, ideas, and money respectively. First, they came up with a self-contained cartridge that

Smith and Wesson, Winchester and all lever action rifles have roots in the Volcanic rifle.

included its own primer. Around this cartridge was built a rifle with a tubular magazine and a lever under and around the trigger guard that moved these cartridges through the magazine and into the chamber. This was faster to fire than the traditional muskets and breechloaders of the day.

Dubbed the Volcanic due to its capability to erupt fire like a volcano, a company of the same name was established to sell both the rifle and a smaller lever-action pistol-sized version. Within a couple years, the company was bankrupt after only producing 6,000 weapons. Horace Smith and Daniel Wesson went on to establish their own handgun company named after themselves and Oliver Winchester was left holding the bag on the bankrupt company, which he renamed after himself and raised from the dead. The lever-action Marlins, Henry’s, and of course Winchester’s of today owes their lineage to this almost unknown rifle.

While only a handful of Lee rifles remain, even a novice to firearms will recognize its features on today’s

guns. The Lee was designed and patented by Scottish-born American James Paris Lee and it was the first detachable magazine turnbolt-action rifle. Its primary extraction cam is still seen on bolts such as those on the Remington 700 and others. Almost every feature it was built with was copied and reused across the board on the Mauser, Enfield, Mosin, and Springfield rifles of the World Wars. While not very popular for its time (it was only bought by the US Navy and China in small numbers) every bolt-action rifle that fires from a box magazine owes something to the forgotten 1879 Lee.

Some say there would have been no AK-47 without the Fedorov Avtomat.

In 1906 Captain Vladimir Fyodorov of the Imperial Russian Army came up with a 9.6-pound short-recoil operated, fully automatic locked-breech rifle that fired cyclically from a closed-bolt over a 25-round detachable box magazine. Fyodorov named it the Avtomat, after the Russian word for a machine that can operate without human interference. It took nine years of work on prototypes before the rifle was placed into limited production in 1915. With the standard Russian army 7.62x54R ammunition being too powerful for the battle rifle, Japanese 6.5x50mm Arisaka ammunition was substituted but issues still arose.

The Tsar ordered 25,000 but the revolution cut that short and just 3,200 cranky examples came off the line. Fyodorov himself, who lived into his 90s, went on to work on several other designs and helped tutor such Russian weapons gurus as Vasily Degtyaryov, Georgi Shpagin, and Sergei Simonov. It can be argued that without the Avtomat there would be no AK-47 or assault rifles for that matter. 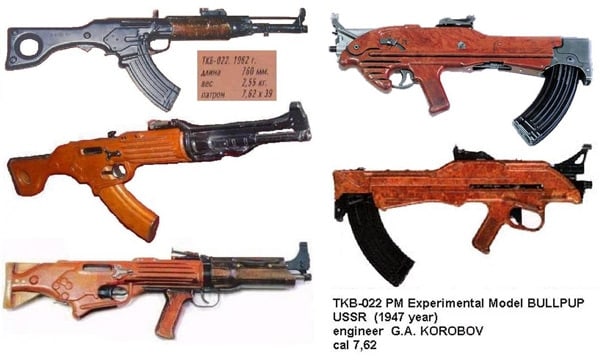 The TKB-022’s compact, bull pup design predates the Steyr-AUG by over two decades.

Soviet small arms designer German A. Korobov tinkered with the next generation of assault rifle in the early 1960s. Using plastics to replace wood and alloy stampings to replace steel, the TKB-022 was light at just 5-pounds in weight. Korobov placed the magazine and action behind the trigger guard making a compact bull pup type of arrangement that gave the rifle an overall length of 20-inches while keeping a 16-inch barrel. Eugene Stoner’s own AR design on the other side of the world used several of the same principals such as high-tech polymers, a small caliber intermediate round, etc. but Korobov’s design could be argued as being even more compact. While never placed into production, its basic tenets and layout predated the Steyr-AUG and Enfield L85 by more than two decades.

Starting in the 1960s Heckler & Koch began work on the next level of rifle. Dubbed the G11, the rifle used extensive polymer construction and moved the magazine from a vertical layout to a horizontal layout in parallel to the barrel (such as with the FN P90 of today) for a more streamlined profile. Box-shaped 4.73×33mm caseless ammunition eliminated the need to have the rifle extract or eject spent casings.

The combination of three round burst firing and an intermediate caliber ammunition translated into low recoil – a principle the FN P90 would later borrow.

The rifle was amazingly fast, capable of over 2000 rpm in theory or about 36 rounds per second. The nature of the round meant low recoil too. In a three-round burst, the shooter only felt the initial recoil after the third round had left the muzzle. H&K never got enough steam to push the design through to adoption and only a batch of 1000 test rifles were manufactured in 1990.

While few collectors have handled even a single example of the above rifles, even the junior shooter has realized the principles that these guns ushered into the modern world. Watch this space and be on the lookout for the next visionary rifle, odds are it will be along any minute.