Ever wished you could fold your gun in half to make it easier to carry? Well, you aren’t the only one. A product of an odd time in firearms history, the folding Hotchkiss Universal Type subgun was an interesting and forgotten piece of the Cold War arsenal.

The French firm of Hotchkiss (officially Societe des Armes a Feu Portatives Hotchkiss et Cie) was a well-known and reasonably successful maker of machine guns and automobiles in the first half of the 20th Century. Hotchkiss made some of the first machine guns used by the US military in the 1900s.

After WWII however, the once-great company had fallen into decline and gambling on a new series of designs to keep their name relevant. The recently ended Second World War had been one of blitzkrieg, fast movements, and paratroopers. No longer would soldiers arrive on the battlefield on the backs of horses, but would clamber out of armored vehicle hatches, jump from airplane doors, and from the sides of helicopters.

The gun of the future would need to be effective, select-fire, and by all accounts as compact as possible. Enter the Universal.

Design of the Universal

In 1949, Hotchkiss designed and placed into production their curious Universal submachine gun. To make a gun as compact as possible, almost every external part of the Universal was designed to fold,

Hotchkiss submachine gun is only 10.79 inches while folded.

collapse, or telescope. The sheet metal butt stock would fold completely under the gun. To make the folded weapon as svelte as could be, both the magazine well and the hollow pistol grip pivoted forward. The 10.79-inch rifled barrel slid back a few inches into the receiver through a long trunion to further abbreviate the firearm. With all this done and the stock underfolded, the Universal was only 17.3-inches long. When compared to its contemporaries: the US M3 Grease Gun and the Soviet PPS-43, which were both 23-inches long with their stocks collapsed, the Universal was a midget.

When the stock was unfolded and the barrel telescoped forward, the overall length of the subgun was 30.67-inches long, the same length as a STEN gun. Weight was 7.5-pounds, loaded with a box magazine full of 32- rounds of 9mm. It was selective fire for either single shots or a rather zippy 650 rounds per minute full auto cyclic rate.

The Universal was by all means small and compact. This was, however, its only redeeming quality.

The gun was very complicated to manufacture, which in turn made it expensive to produce. For the soldier in the field, learning to carefully fold and unfold the weapon in a strict process was
likewise problematic. It could not be fired while collapsed and transforming the weapon under stress took several priceless seconds. 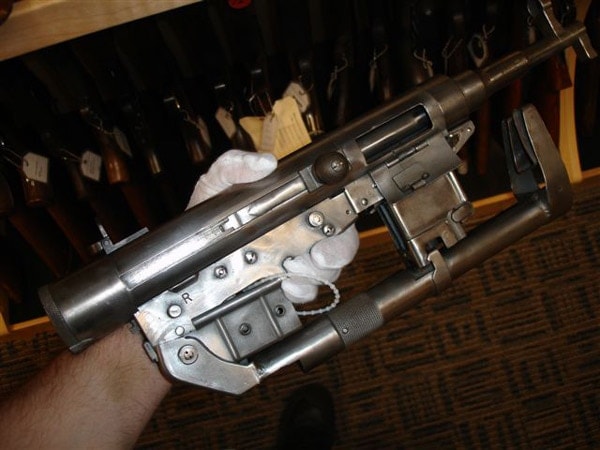 Hotchkiss Universal submachine guns are sought mostly by collectors interested in WWII and sell for around $500.

It comes as no surprise that it never really caught on with soldiers and cheaper, more effective Belgian Vignerons and British Sterlings, not to mention war surplus STENS and MP-40 sub guns at bargain prices, proved stiff competition. The Universal was only produced for three years with a few small sales to the French Gendarme, Venezuela, and Morocco, were made.

Hotchkiss threw in the towel on their weapons line in the 1950s and concentrated on vehicle production (making Willis-licensed Jeeps in France) until the company disappeared in a series of mergers in the 1970s.

Today a few transferable Universals are floating around the country and always draw a crowd at full-auto meets. Demilled parts kits are available for about $700 to try to build your own.

In 2000 Kel-Tec came out with their SUB2000 line of pistol caliber carbines that fold to 16-inches overall. The same company later introduced their SU16 5.56mm carbine that folds to 25-inches. They have proved more popular than the Universal had in its time.  C’est la vie.