The Helwan 920: Cheap Knock-Off or Beretta-Quality?

The Beretta Model 92 must rank among the most oft-copied handgun designs.  Much of the gun’s appeal stems from its adoption by the U.S. military in 1985 when it supplanted the also adored 1911A1.  Armies around the world began accepting not only the Beretta itself into their respective arsenals, but also “borrowing” its physical pattern.  And the country that brought us pharaohs, pyramids and hosts the mighty Nile built one of those spin-offs; that lesser-known arm is the Egyptian Maadi Helwan 920 pistol.

Attack of the Beretta clones 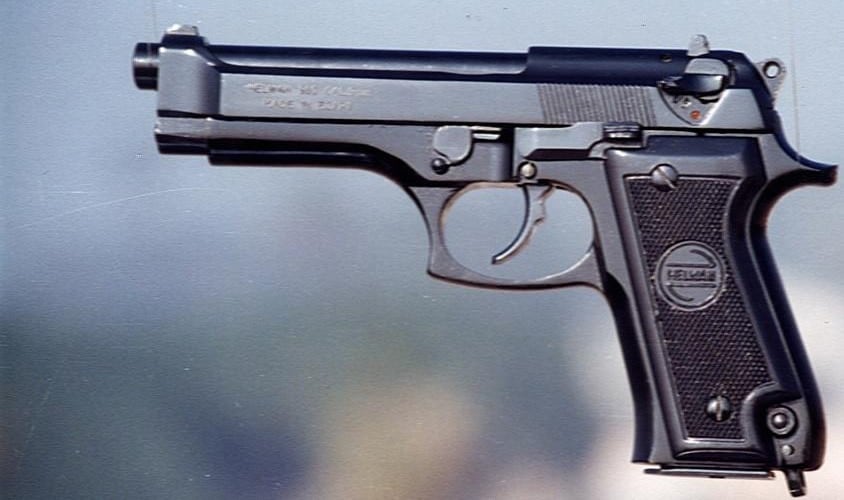 The Helwan 920 seemingly floating in mid-air. Looks rather identical to the Beretta 92.

Picture it.  The Beretta 92 stands at the head of its proverbial classroom, a teacher amongst pupils.  Seated all around are the onslaught of 92 copies from various countries of manufacture with just as many levels of quality and reliability.  The most well-known, and arguably the most solid, is the Taurus PT92.  Beretta actually set up a factory in Brazil to supply Brazilian Army needs, which was then bought out Taurus.  Many un-licensed copies of the 92 followed, including the Turkish Army’s Yavuz 16, imported here under the name American Tactical AT92, Taiwan’s T75, the Iraqi Tariq, and the Spanish Llama M82.

The list of actual Beretta-licensed copies considered to be the best of those children is quite short.  France has the PAMAS-G1 and M92.  South Africa’s Vektor Z88 licensed version is used by the South African Police.  And lastly, the Egyptian company Maadi produced a much lesser-known licensed Beretta-clone, which is the gun under scrutiny in this article: the Helwan Arsenal 920.

The Maadi Helwan 920 is exactly what you’d expect it to be — a darn accurate copy of the Beretta 92.  It mimics the semi-automatic 9×19 (9mm Parabellum) pistol with Beretta’s falling locking block action. And the Helwan 920 is a pretty close copy in terms of outward appearance with a frame-mounted safety and decocking lever, though unlike its Beretta father, the Helwan does not have ambidextrous controls.  It featured a blued finish and saw limited importation by Intrac, mostly in 1997, according to the 33rd Edition of the Blue Book of Gun Values. 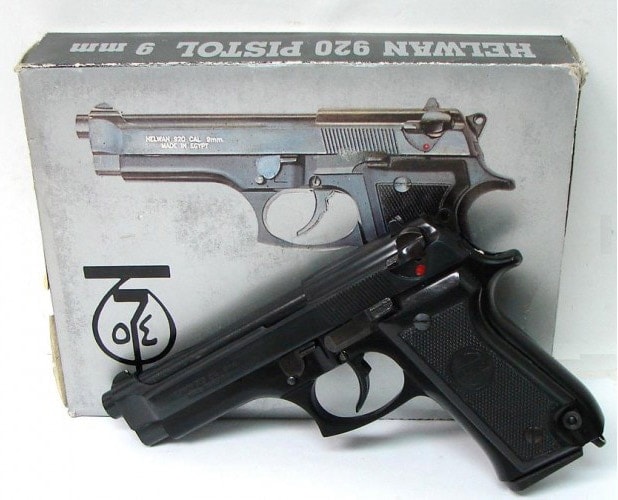 Otherwise the Helwan 920 uses a single-stack 10-round magazine, but several users suggest the 920 can accept larger-capacity Beretta magazines with a little modification to the magazine’s catch. The gun’s bottom magazine release differs and some users find it more difficult to manipulate when quick reloads are desired. Smaller differences can be found such as the Egyptian-logo grips and the opposite orientation of the lower lanyard ring.

Although exact numbers are not known, it is clear that relatively small shipments of the Helwan 920 were imported into the United States.  Though somewhat scarce, the Helwan does not command Beretta prices.  Blue Book prices range from $200 to $375, with solid condition examples regularly selling at the $250 price point.

Maadi Arms and the Helwan 951 Brigadier

While the quality of government run Egyptian Arms has been called into question over the years, the Al Maadi Company for Engineering Industries is most well known in the gun world for its manufacture of an AK variant, which is oft sought by collectors.  The company’s foray into the pistol market with Helwan models driven by Beretta designs is not so recognizable.  Interestingly, the company’s names stem from actual Egyptian places, with Maadi being a modern southern suburb of Cairo, while Helwan is a city on the banks of the Nile River.  Yet the styling of their firearms is a far cry from old Egypt.  While our focus here falls upon the 920, it is important to note that the Maadi company also produced a copy of the Beretta M1951 known as the Helwan Brigadier 951. 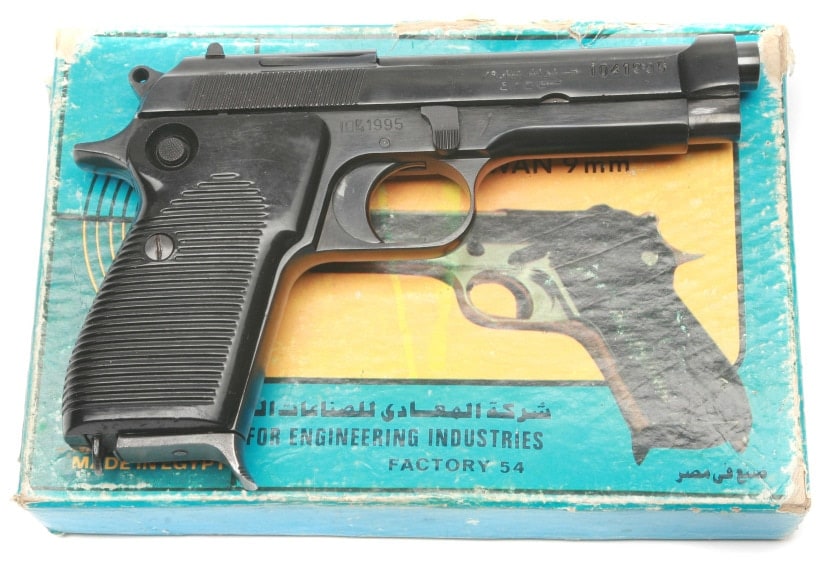 Besides magazine capacity, the Helwan 951 has grips with horizontal lines. (Photo credit: ProxiBid)

The Brigadier holds 8 rounds in its single stack magazine and is close spin on the M1951.  The Brigadier is quickly distinguished from the 920 by its grips.  Unlike the grips of the 920, which match the Beretta 92 save for the Egyptian logo, the Brigadier is easily identified by the horizontal line pattern on its furniture.

While coming across a Helwan 920 these days is quite unusual, there are many more Brigadiers on the market, though exact quantities were never accurately tracked.  The Brigadier was imported by both Interarms and the Navy Arms Co. in the late 1980’s and up through 1995.  Though lesser in numbers, the 920 is generally regarded as a superior arm in both construction and function.  Those who have owned and shot both variants suggest Maadi learned from the shortcomings of the Brigadier — including metal hardness, slide wear patterns and rough overall finish — and improved upon those with the newer Helwan 920.  The Helwan is also more sought after due to its increased magazine capacity.

Quality control, mainly on the 951’s was spotty.  Some models function flawlessly, while others struggle to digest ammo.  On the contrary, the 920 has been known to accept most 9mm loads, including various reloads.  The Helwan 920’s fit and finish, while adequate when standing alone, does not compare with that of the Beretta 92.  Sadly, it appears that most Helwan parts, including a potentially weak locking block, are not as interchangeable with its counterpart as, say, the parts systems of the Taurus PT92.  In fact, replacement parts for the Helwan 920 can be difficult to acquire should they be needed, though the Beretta-based design is a reliable and sturdy one.

In the end, a Beretta is a Beretta is a Beretta and, well, a Helwan is not.  But that’s really not the point.  If a Beretta 92 is what you’re after, you best buy the genuine article.  However, if the real McCoy is out of your price range — or if you just want something a little more unusual — a Helwan 920 might be just what the doctor ordered.  Besides, a full-size 9mm for a few bills can’t be all that bad.  The major online firearms auction sites currently have numerous Helwans listed.   But remember, for a true Beretta 92 clone, make sure you find the 920, and not the 951 Brigadier.  While Maadi Helwan’s may not hold up to the same intensely heavy use as their papa Beretta, the Helwan 920 can be a perfectly serviceable pistol with classically good looks and trademark style.