The Confederate States of America only existed for less than half a decade, but the arms of the men who served in her defense were some of the most interesting carried by any soldiers on this continent. Why? Because the majority of them came from Europe, although were often of native design.

With that, let us look at the arms that a Confederate grunt would typically carry in 1863, 150-years ago, in their fight against a much better equipped Union army.

As the seceding power, the Confederate states during the 1861-65 Civil War were compelled to use a dizzying array of arms to equip their fledgling armed forces. Dozens of 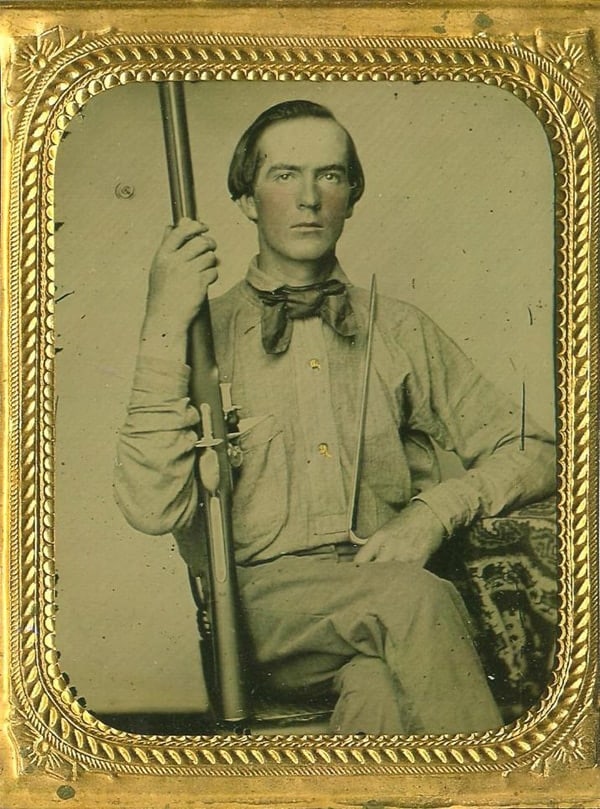 Confederate soldier with a converted flintlock rifle of unknown maker, holding a bayonet.

US Army forts and installations were located in the Southern states and, in most cases, their inventory of arms made it into Confederate hands. Also each state owned their own militia’s arms, however these often included many ‘obsolete’ guns that could have been found fifty or even a hundred years earlier. With limited ‘standard issue’ arms at their disposal, personal weapons, brought to war by those Johnny Rebs marching off in homespun uniforms, made a huge appearance in battle.

By 1863 most of these older firearms had either worn out, captured (more than 70,000 rifles were lost in the first nine days of that year after the defeats at Vicksburg and Gettysburg alone) or were otherwise unserviceable. New ones acquired by any means necessary gradually replaced these lost, broken, and outdated arms. 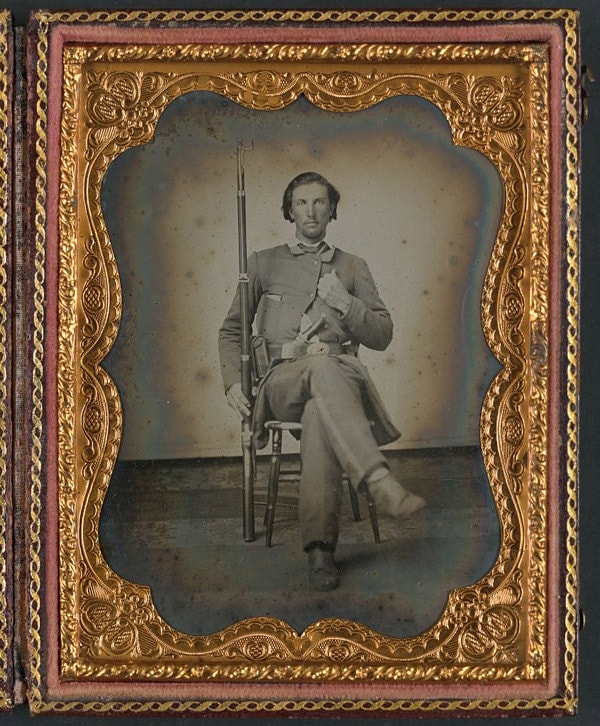 Without a large manufacturing base (due largely to a society built primarily around agriculture), the Confederacy sent agents to almost every country in Western Europe in search for a source of modern arms. Some of the best luck was had in England where southern purchasers bought up to 350,000 rifles from the a number of firms including Birmingham Small Arms Trade (BSAT) and the London Armoury Corp through a half dozen small manufacturers including Bond, James, Scott & Son, Kerr, and Freed & Co. These were all of the 1853 Pattern variety of the same sort used by the British Army already in the Crimean War, the New Zealand Land Wars, and the Sepoy Munities.

At 9.5-pounds and 55-inches long it was no lightweight gun, but is was reliably 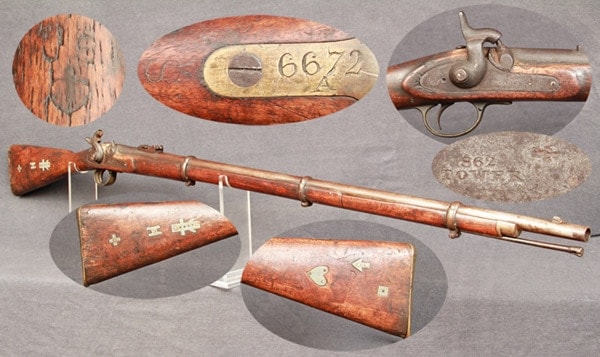 percussion-fired, and very accurate due to its rifled barrel. Firing a .577-caliber ball or bullet from a 29-inch long .58-caliber barrel, it could make aimed shots out to 500-yards in the hands of a skilled marksman. The barrel was held to the wooden stock by three metal bands, which has led to the rifle being referred to as the ‘3-band Enfield’.

With some 1500 of these rifles leaving Britain in the holds of smugglers bound for the South, it is believed that by 1863 most of the Army of Northern Virginia was equipped with one. In fact, it was so popular that the Union Army even bought them, in nearly double the quantities that the CSA did.

Pistols and revolvers were not extremely common in the south, with many cavalrymen using shotguns instead. However, most officers still saw the need for a sidearm as a symbol of rank if nothing else. This was true of the New Orleans designed LeMat revolver and others, which were formidable in appearance, but relatively expensive and hard to come by. 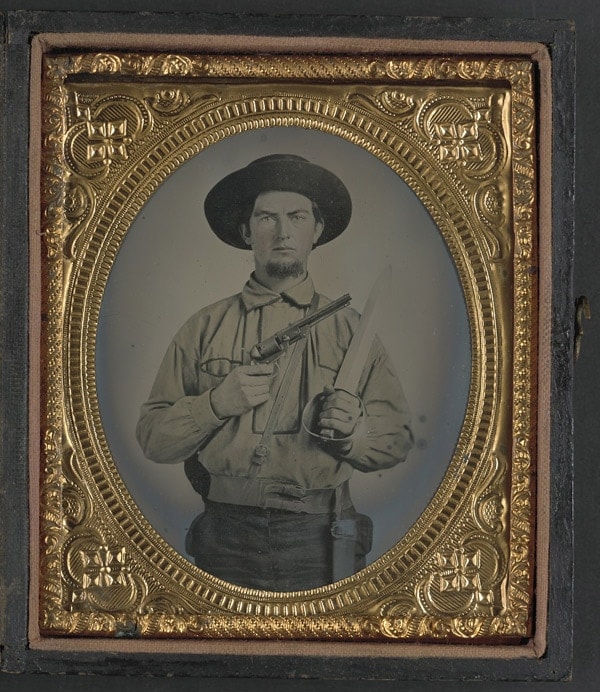 The most common revolver found in Confederate service was the 1851 Colt Navy and its clones. Referred to as the “Navy” due to a nautical scene engraved on the cylinder and not because it was issued to sailors, the 1851 Colt was a best seller in its time. Between 1851 and 1860, more than 100,000 were produced. It was a large gun, at some 14-inches overall with a 7.25-inch long octagon barrel. The six shot revolver was chambered for .36-caliber and, while loading the cap and ball revolvers could take a long time, spare preloaded cylinders could be carried that could be swapped out in a few seconds.

At the start of the war the Colt factory (in Connecticut and thus cut off from the South) was soon maxed out in production of the 1860 model Colt for the US Army. However, a large number of 1851 models were still floating around. They were a popular revolver on the commercial market for a decade before the Civil War and a number of respectable southern gentlemen owned one or two already before secession. Others were purchased by private means and shipped to the Confederacy through border states during the conflict. A large number of so-called London Model Colt 1851s were also bought in England and ran through the blockade.

A good number of British made Beaumont-Adams Revolvers and Kerrs Patent Revolvers, along with the French Lefaucheux M1858 pinfires were likewise bought in Europe and shipped to the CSA, but the Colt was still the most common by far.

Several small concerns such as Griswold & Gunnison, Ridgon & Ansley, and Leech & Rigdon built unlicensed Colt Navy copies with machinery often bought through Confederate government loans. With steel hard to come by in the south, these makers used cast iron and brass extensively. These makers built fewer than 10,000 of all types and survivors go for astronomical prices today.

Confederate guns are possibly the most collectable of all American military arms by category and they are still out there for prices that are within reach. However, be extremely careful when shopping for one. For example, of the 1.5-million odd Pattern ’53 Enfields made for military service, only 350,000 were bought by the CSA and less than that ever arrived in the country. Accordingly, don’t expect to find a beautifully marked ‘CS‘ Enfield on a gun show table (or at least one that’s authentic). 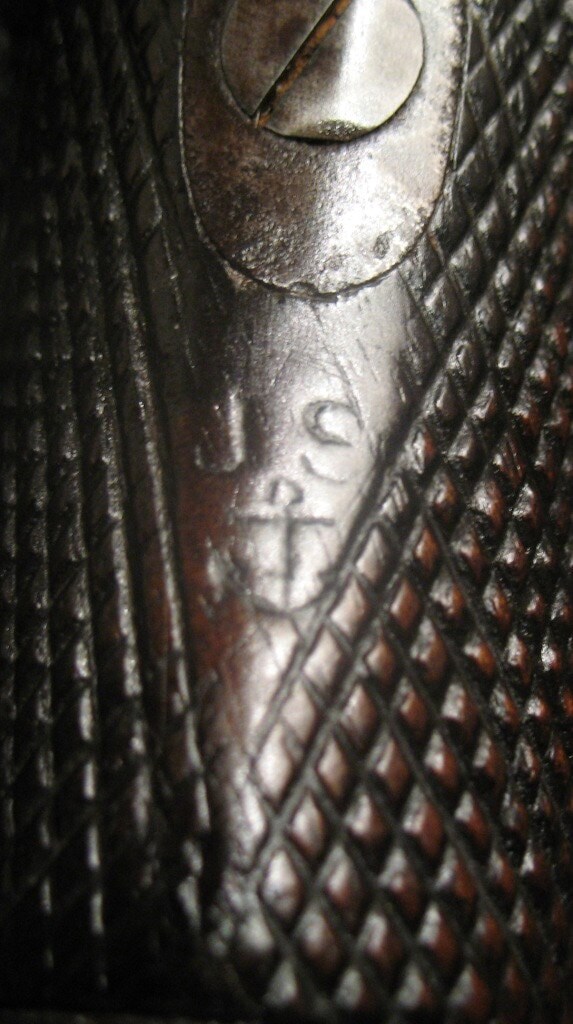 “JS” over anchor sign marking. The quality of the marking and location vary greatly from rifle to rifle.

Most imported rebel guns were not marked by the central government and most that were had state markings (SC, GA, etc.) instead of “CS”. Today, Civil War collectors debate over whether the most commonly seen mark, a “JS” over an anchor, was in fact a Confederate acceptance stamp. Of the extensive collection of verified Confederate-used weapons in the collection of the National Firearms Museum, the vast majority of examples are simply marked with soldier-added markings like initials or stock carvings.

To add to the confusion, the famous Bannerman’s sporting goods company, one of the first army surplus dealers, sold crate loads of former Union Army Springfield rifles and Colt and Remington revolvers complete with ‘CSA‘ markings added well after the war—even in the 1900s people paid more if it was a rebel gun “right out of Stonewall Jackson’s sock drawer.”

When you add the vast numbers of replica arms made over the years specifically for collectors, the chances of finding an authentic Confederate used Enfield (that can be verified) are pretty low. Always insist upon proof of the provenance of the weapon such as soldiers’ letters or unit documentation when buying a piece marketed as an authentic Confederate Civil War item.

Replica arms may be acquired with prices ranging from $30 non-firing pot metal and resin pieces to $89 for a black powder brass-framed generic Colt 1851 Navy to a $1000 Pietta Le Mat. Since in almost all cases these are black-powder guns and not under the NFA, you can have them shipped right to your door.

Surely, Robert E Lee wished he could get them as easy.