The 1897 Winchester Trench Gun: An old broom knows all the corners

Americans live in a shotgun culture and we have long brought them with us when heading to war. Without argument, one of the most popular shotguns ever built in the United States was the 1897 Winchester and this work horse got called to serve in not only both World Wars, but in Korea and Vietnam as well.

The design of the Winchester Trench gun

The Winchester Company of New Haven, Connecticut, first breathed life into their 1897 model shotgun through a modernization of its 1893 series pump gun. Both were designed by firearms legend John Moses Browning.

The gun was light and handy, at 7-pounds, and it was sold in a slew of variants with barrels ranging anywhere from 20-30.” One of the first pump action shotguns capable of shooting the then-new 2.75-inch smokeless powder shells, it was an instant hit at $25.

Users carried five shells of buckshot in the magazine tube and one in the chamber. Better yet it could be slam fired as fast as the pump could be worked, unloading 54 balls of 00 buckshot in about five seconds. The Army, needing some bad medicine to deal with Muslim insurgents in the Philippines and Mexican bandits on the border, bought several small batches of riot guns with the 20″ barrel as early as 1900.  When World War 1 erupted and the US found itself in the worst of it in 1917, again they found they needed more shotguns; like 20,000 more.

Taking the basic 1897 in its 20-inch barreled ‘riot’ configuration, the Army was satisfied,

as long as they could mount a bayonet on the scattergun. Winchester at the time was neck deep in fulfilling its orders first for the P14 series of rifles for England and then in producing thousands of M1917 Enfield rifles for the rapidly expanding US military effort.

By designing a heat shield/bayonet lug attachment that took the same long bayonet that the P14/M1917 rifle used, Winchester killed two birds with one stone and the 1897 Trench model was born.

By June 1918, there were enough shotguns “over there” to assign 50 to each division, with them ultimately going to the scout platoons of each regiment. A canvas sling pouch holding 32-shells was designed to give the soldier something to keep his all-brass 9-shot 00 buck ammunition in as he fought in No Man’s Land. They were so effective, ungentlemanly, and brutal in combat that the German high command once, briefly, announced they would execute any US soldier captured with one in his possession. This threat vanished when Blackjack Pershing replied that if the Germans started shooting American POWs, then he would reciprocate and start lining up Germans captured with saw bladed bayonets or flamethrowers.

World War Two and beyond

At the start of WWII in 1941, the ‘surplus’ of shotguns in the US arsenal suddenly vanished and once again Winchester was asked to resume production of the now almost half century old 1897 series scattergun for the military in trench, riot, and training gun variants. Each marine regiment was recommended to have one hundred on hand while

A Soldier and a Winchester 1897 stand up to the rain in Vietnam.

the Army set their own needs for MP and constabulary units. By March 1943, some 24,829 new 1897s were sent to the military. They differed from WWI issue Winny’s in that they were of a takedown variety and not solid framed like earlier guns.  They also had a slightly different stock and handguard with four rows of vent holes rather than six of the WWI variant.

The 1897s, both new production and old stock were well received in Marine combat units fighting in the green hell of the south pacific. Photos of squad-sized units from the combat zone often show the point man invariably shouldering a Winchester, ready to counter an ambush. The only problem reported with the shotguns was the tendency of commercial paper shells to swell and become useless in the high humidity of the jungle—this issue was fixed with the use of 1918-vintage all brass 00 shells. If it was good enough for the Kaiser’s storm troopers, it was good enough for Hirohito’s Naval Infantry.

By the end of the war, more than 30,000 shotguns remained on hand in US arsenals, for the next go round. These were dusted off and used in Korea in the 1950s and Vietnam in the 1960s before being surplused. As such, the Winchester 1897 is possibly the 20th century’s most iconic weapon.

True and correct US military 1897 trench guns, either from the WWI or WWII era, are rare and extremely collectable. These guns were heavily used in battle with many not 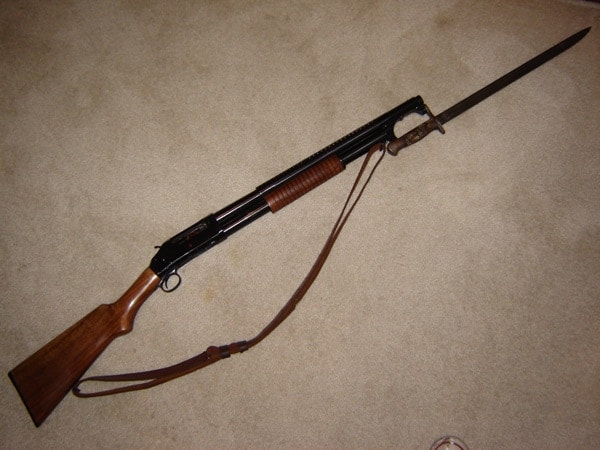 making it back and its commonly speculated that there are more faked trench guns out there than were ever manufactured.  Winchester made over a million commercial variants of the 1897 as late as 1956 and these abundant ‘civvy’ versions today run about $500 in good condition. Norinco even makes a near-identical trench gun clone that typically goes for about $200. Real military vets, with the right stampings, marks, and accessories start at five times that, even for poor models, and often go as high as $3500.  This high price is also an incentive to forgers.

One of best guides for these series of shotguns is Canfield’s Complete Guide to US Combat Shotguns, but here are a few tips. Look for WB or GHD inspection stamps on WWII guns along with factory stamped US markings and “flaming bomb” acceptance stamps. WWI 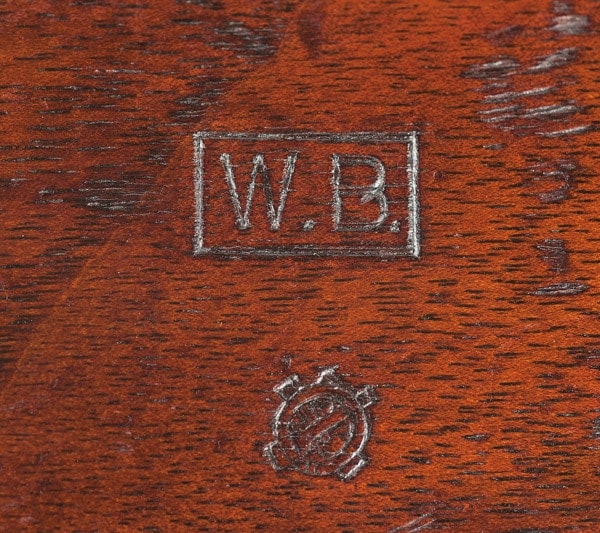 shotguns will sometimes have hand-stamped acceptance marks or none at all, rather than factory perfect marks.

While serial numbers cannot be confirmed against a verified list, they should all at least match on an original gun. If you find one that has been parkarized or painted, run, as all left the factory in standard Winchester bluing. Also, look out for a riot gun variant, often issued to and maintained by National Guard units as late as the 1970s.  These did not have the handguard, or bayonet attachment and they are collectable in their own right, but not as much as legitimate foreign combat weapons.

World War One type weapons are extremely rare as many were given away as military aide to the South Vietnamese army in the 1960s and never seen again, so be especially wary of somebody with a beautiful 1918 vintage trench gun for just the right price…unless they have an uncle in Saigon.