The .44 AutoMag Pistol: More than a Hollywood handcannon (VIDEO)

Here in the US, we like our handguns calibers to start with a four which is kind of weird when you consider we are also on the everlasting search for a handgun with recoil on par with calibers that starts with a three.

Wait, you never heard of the Auto Mag? Well, here’s the story.

Auto Mag, the round

Then, place a large .429-caliber 240-grain bullet atop it and load up to 26 grains of powder as propellant.With a supersonic velocity of some 1450 fps, this large round could impart a very respectable 1120-ft/lbs of energy downrange.

Devised with hunting in mind, the round is capable of crippling shots on almost any size game at close to mid ranges. Indeed the round is still traveling at more than 1300fps at 100-yards, delivering 931-ft/lbs of energy. Lee Jurras, the man behind Super-Vel ammo and the father of the modern hollow point, was a big fan of the round when it came out, but we’ll get to that later.

This gives the round almost the exact performance envelope of a .44 Remington Magnum. Indeed if you put the two rounds side by side, they look identical except the Auto Mag is rimless so that it could be fed and extracted through a very specially designed semi-auto pistol.

Speaking of which, let’s talk about…

With an R&D by Harry Sanford and Max Gera that lasted more than a decade, this gun was perfected enough by 1969 to enter low rate production.  Billed as the ‘Aristocrat of Big Bore Handguns’, at the time of its introduction the Auto Mag Pistol (AMP) fired the most powerful production handgun round on the market. 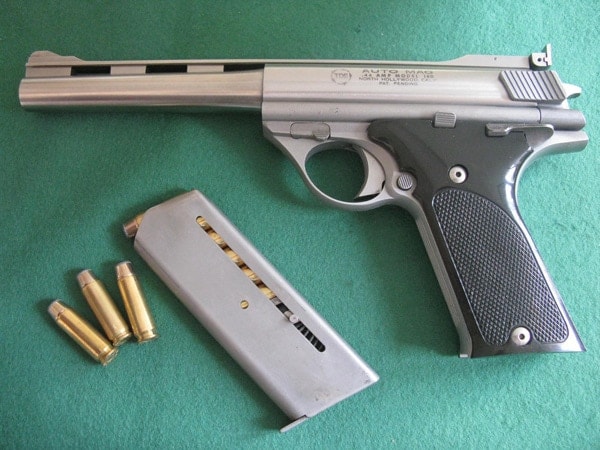 The gun was a large-framed semi-auto that operated on a long-bolt short recoil system instead of gas recoil like today’s Desert Eagle. To keep the beast of a round safely locked down, it used an eight-lug rotating bolt that resembles the kind found on M16/AR15 rifles. A single stack detachable magazine fed the .44 AMP rounds through the grip and gave the pistol a 7+1 capability. 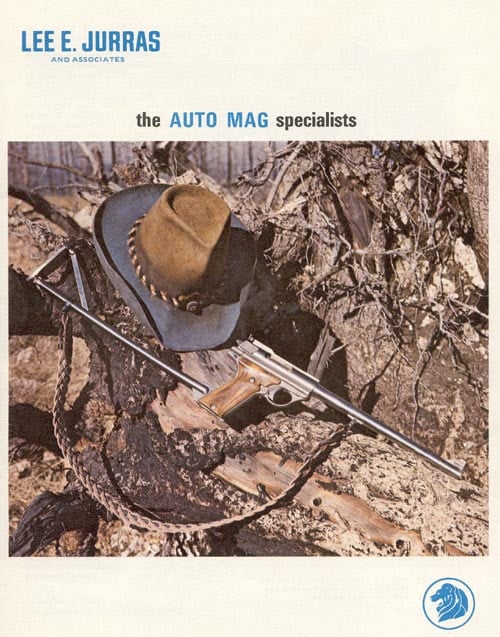 The grip and ergonomics were based on the High Standard HD while the take down method and control surfaces were similar to those of the Walther P38.

The gun was over-engineered and complex, which required methodical attention to detail and craftsmanship at all stages of the manufacture process. Extensive use of machining and stainless steel (the chamber itself was 3/16″ thick) created for a solid gun.

Tipping the scales at 57-ounces (yes, that is slightly more than 3.5 pounds); its 6.5-inch barrel gave it a length from muzzle crown to hammer spur of 11.5-inches. Overall it was a hair shorter and about two ounces heavier than the six shot S&W Model 29 .44 Magnum wheelgun, but it also offered better handling, a longer sight radius, two extra shots with a quicker reload if needed and improved recoil. Jeff Cooper was able to fire early prototypes first hand and found the AutoMag pistol to be controllable.  He was even photographed firing it strong-hand-only with full power loads.

Lee Jurras took an early production gun around the world and in just a few years had taken more than 125 medium and large game animals from Alaska to Africa, proving its worth as a hunting platform.

The Auto Mag Corporation was only in business for about a two-year period before bankruptcy shut the line down. This was not because the guns had problems; on the contrary, they were so well built that the 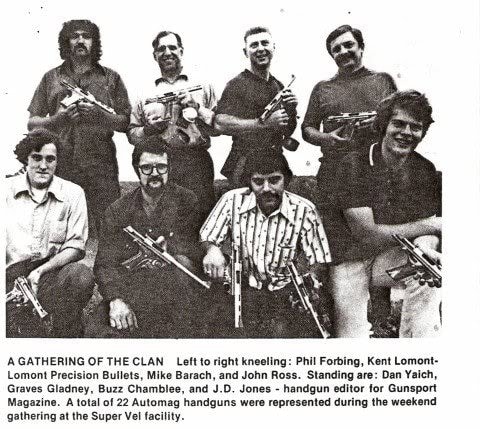 company simply could not produce them for a viable price. Marketed at a semi-affordable $247.50 price tag in 1971 (adjusted to $1381.18 in today’s dollars) the company lost nearly a grand on each one sold at this price, which soon led to bankruptcy.

Lee Jurras and the holding company TDE wound up with the company in 1974 and, keeping Harry Sanford around to oversee production, took another stab at marketing the guns. Moving the price point to as high as $3250 MSRP and offering other calibers, NFA-regulated shoulder stocks, exotic grips, and interchangeable barrels, they had slightly more success selling to custom firearms collectors. Jurras even formed “Club de Auto Mag Internationale” so that these collectors could assemble at regular meetings with like-minded hand cannon owners.

However even Jurras’s efforts were not enough and by 1982, after the company had changed logos, and hands several times, the line was closed down. Since then the guns have been reverse engineered a couple of times, using old plans and expired patents and sold under a number of other names.

Sanford went on to start Arcadia Machine & Tool (AMT) and for years sold a line of handguns, they billed as Auto-Mags.  These were not in the .44 Auto Mag caliber, nor based on the artillery piece of the same name. In 2010 a company billing itself as Auto Mag, advertised that they would be selling some of the classic old guns in more or less new production at $5600 a pop—but as of yet none have appeared.

Even with the saga of this gun’s birth, death, and rebirth, these guns have an aura about them. Movie tough guys such as Clint Eastwood and even Ted Nugent slung Auto Mags in films as did fictional Mack Boland in hundreds of pulp fiction novels. This has kept the public demand for Auto Mags on a low simmer for 40 years.

Actual 1971-72 Auto Mag guns, the original 44 AMPs, number fewer than 3000 production copies and are the most valuable to collectors. The 1000 or so Lee Jurras custom guns will have “LEJ” prefixed on the serial numbers and are subject to wild value swings. Pasadena-marked Auto Mag pistols in almost any working condition start at $2000 and move upwards from there rapidly. Pasadena guns will typically have the stylized ‘AM-rifling’ 007-style logo that rather resembles a spider going down a drainpipe.  TDE/OMC-made

Auto Mags, marked North Hollywood or El Monte, are more commonly encountered and were made until 1982 but still valued at $1700-$2275 according to the latest Bluebook numbers.

Today the .44 Auto Mag concept has largely been eclipsed by such production rounds as the 10mm and .38 Super which provide similar firepower in semi-autos as well as the IAI Desert Eagle which loads actual 44 Magnums (with rims).

Like other overly unique pistols such as the Gyrojet and the Mars, the rounds for these guns are almost as rare as they are. Only two manufacturers, CDM of Mexico and Norma of Sweden ever offered the 44 Auto Mag in their catalog and both have long since stopped. When old stocks are found for sale they average as much as $7 per round. Cor-Bon/Dakota Ammo had recently started production of this classic heavy-hitter at reasonable prices but quantities are hard to locate. 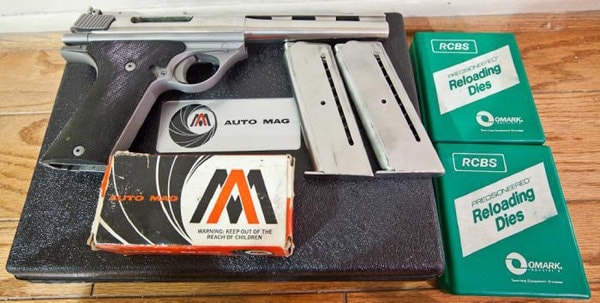 Because of this fact, many Auto Mag pistol owners who wish to shoot their guns are reloaders by default. Both Eagle and RCBS have sold the die-steel sets for these rounds over the past decades. Indeed, possibly the only time custom reloading was mentioned as a plot point in a major Hollywood movie, 1987s Beverly Hills Cop II, was about the Auto Mag.

Walter Sanford, the son of the late Harry Sanford, has inherited what’s left of the original tooling, spare parts, documentation, plans, and molds for the Auto Mag Company and currently runs a website. However even Walter is trying now to pass on his father’s legacy and is looking to sell the whole lot, website included, for $50,000.

So those of you with a little extra scratch lying around and a predilection for Dirty Harry movies, now may be your moment.