The standard service heavy machinegun in the western World is the vintage 1933 Browning M2. Those who have used them lovingly call this .50-caliber warlord, the “Ma Deuce”. What you may not know is that, on the other side of the fence, the Soviets invented their own equivalent heavy machine gun. Like the ‘Deuce, this Russia design, while officially labeled as the DShK 1938, it is better known to the ruskie as simply Dushka.

During World War 1, the German Army introduced the Mauser 13.2mm TuF round, a huge cartridge of more than four inches in length. This elephant round was introduced to kill British tanks that were just then starting to lumber about in No Man’s Land. In 1921 the US Army, with a little help from John Browning, developed the 12.7x99mm BMG round in response, known and loved today as the ’50-cal.’ The Army, however did not have a gun that fired the round, the 121-pound water-cooled M1921 Heavy Machine Gun, until 1929. At the same time, the German army was secretly developing a new 13mm round that would be used in a new series of heavy aircraft machineguns.

With Soviet military intelligence well aware of both these developments, they pressed for a monster machinegun of their own.

Vasily Degtyaryov, the Russian machine gun maker equivalent of John Browning, was scratching his head in 1930. Over the course of a forty-year career this Hero of Socialist Labor personally invented no less than seven machineguns of all sizes, from the PPD-40 sub machinegun to the PTRD anti-tank rifle. He had studied directly under Vladimir Fyodorov, the man who invented one of the first assault rifles in the world: the Fedorov Avtomat. 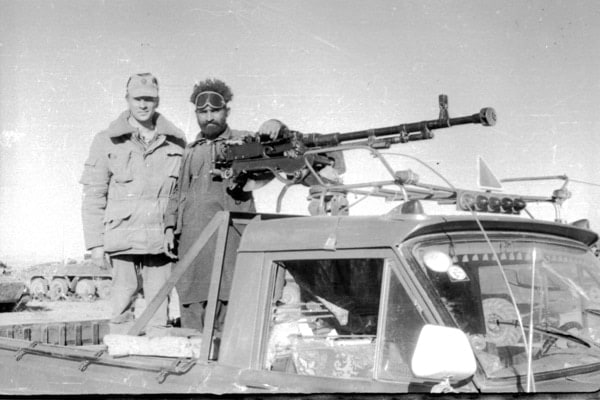 However, as gifted Vasily was, he had an issue with designing a large caliber heavy machine gun. His efforts led to the creation of the DK (Degtyaryov Krupnokalibernyi) in 1930, a huge air-cooled, gas-operated full auto weapon that used the new 12.7x108mm BT-3 round capable of piercing a half-inch or armor plate at 500-meters.

It weighed in at about 75-pounds and fired from a number four, right turn threaded 42.29-inch long barrel with numerous distinctive fins on its surface to dissipate heat. This innovative barrel system saved the gun from having a heavy water jacket to cool it, which made it about 50-pounds lighter than Browning’s M1921 design while firing a slightly larger bullet. A large donut shaped muzzle break further identifies the weapon. When firing, a pair of spade grips at the rear of the gun provided a control surface. Fed from a 30-round drum atop the receiver, the gun had a nasty of bending cases, jamming, and other issues. In short, the Red Army loved the gun and the ammunition, but hated the feed system. 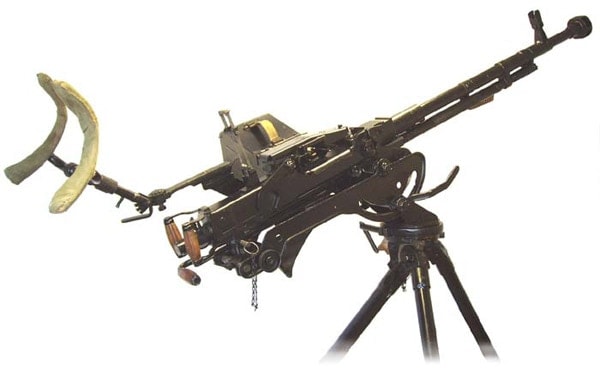 Enter Georgy Shpagin. Twenty years younger than Degtyaryov, Shpagin had also studied under Fyodorov and worked in the same programs as his elders. Shpagin picked up the task of modifying the DK gun while Degtyaryov moved on to other projects. By 1938, he had effectively designed a metal link system of 50-round belts that are pulled left-to-right into the DK gun, spitting out brass and links downward through the receiver. This new gun was labeled the DShK “Krupnokaliberny Pulemet Degtyareva-Shpagina, DShK” (Degtyarev-Shpagin, large caliber) and by 1939 was being produced as part of a new Five Year Plan. This soon became changed in the field to “Dushka,” which is a Russian slang word that roughly means baby, or sweetie.

The Dushka turned out to be very sweet indeed. It was designed with a universal 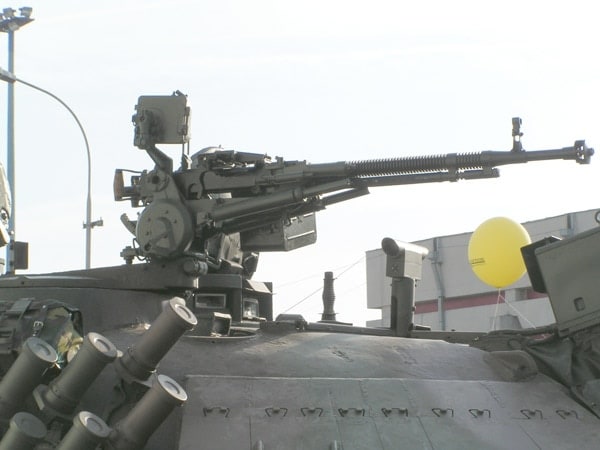 mount that could be fitted to a set of wheels like the Maxim Sokolov machine gun and then  pulled into combat by foot soldiers, or set on a pintel mount on a tank, truck, or ship. While it was incapable of penetrating heavy German armor during World War 2, it was brutally effective on any vehicle with less armor than a Panzer. When used against personnel or field positions it was a meat chopper that left the definition of cover and concealment up to review. To low flying aircraft it was a feared anti-aircraft-artillery (AAA) piece, capable of passing through both sides of a Stuka dive-bomber and leaving a broken plane behind in its wake.

Some 8,000 of the guns were assembled during WWII alone but it remained in production in the Soviet Union until 1980 when it was grudgingly augmented by the 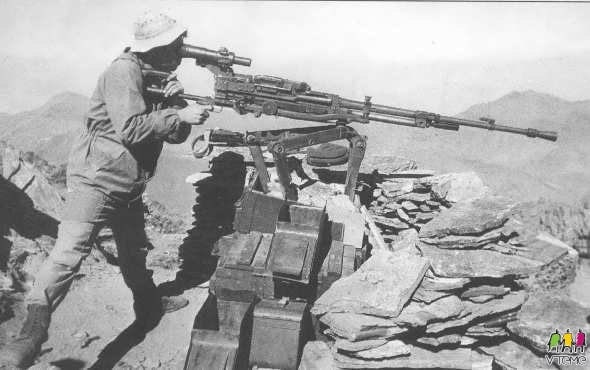 Dushka re-purposed as a long range sniper system in Afghanistan.

NSV and later Kord machineguns. This didn’t mean the Russians threw them away though. On the contrary, Dushkas have been seen in operation in Afghanistan, Chechnya, and May Day parades in Red Square to this day. Taking a page from Carlos Hathcock’s time in Vietnam, Soviet snipers converted Dushka’s with heavy optics and short belts of match grade ammo to produce extremely long range sniper rifles.  These were put to good use in Afghanistan.

The Soviets were great believers of arming like-minded friends and influencing Communism around the world with shiploads of free guns. This usually meant that if you could spell the word CCCP then odds were you could secure your country Dushkas, discounted or gratis, during the Cold War. These guns showed up hard in 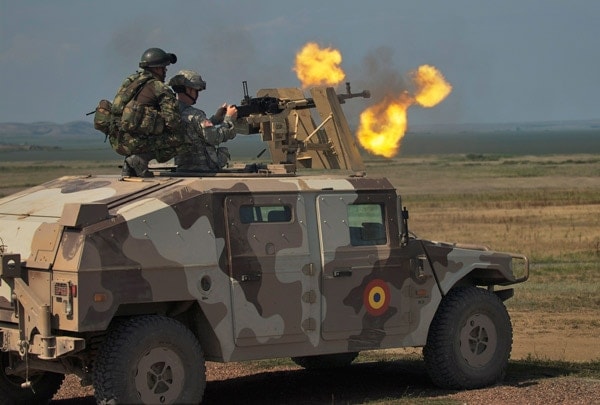 Korea, Vietnam, Angola, Nicaragua, Somalia, and just about every other third world exotic locale with a toe in the socialist pool. Ironically and on more than one occasion, the Soviets found themselves on the wrong side of the DshK, with the big gun being a favorite of the Muj in Afghanistan. China, Poland, and Yugoslavia in the past and even Iran and North Korea today continue to manufacture the gun new so you can bet the last Dushka gunner’s grandfather has yet to be born.

In fact, they are so frequently encountered overseas that US troops are often very familiar with their operation from both sides of the muzzle. When mounted on the back of a Toyota pickup truck, Dushkas are a piece of mobile heavy artillery at a bargain price.

With the end of the Cold War in the early 1990s, Dushkas were being sold off cheap to enterprising arms brokers worldwide by any less than scrupulous former Soviet eagerly looking to convert to Capitalism. 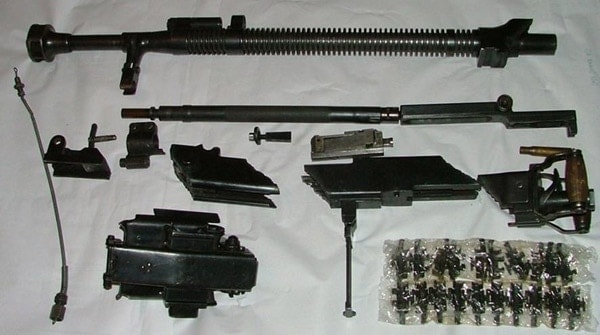 DShK parts kits are available in the United States… for a price.

Soon they began washing up here after passing through a deactivation procedure that included a blowtorch and a nearsighted worker paid by the cut. Centerfire Systems and others sold these DShK parts kits with torched bits and pieces for as low as $400 as recently as 2007. Since then however, the price has been inching up and you would be lucky to find one today for three times that amount in any condition.

The main problem with building these guns to a functional semi-auto or even to non-functional display is the scarcity of the 12.7mm Soviet metal links and rounds on the market here in the US. The ammo, when it’s available, is typically at about $10 a pop when loaded.

Firing a large caliber at a scary rate of fire, the Dushka is a great option for home defense, but rather improbable as a CCW piece.

Incidentally, the Degtyaryov factory is now an independent company after that whole communism thing didn’t work out but still shares the name of its grandfather.  It also still produces heavy machineguns alongside motorcycles and mopeds in Russia to this day.

I’ll stick with the parts kit.