The Gyrojet Rocketgun: Smoking too much jet fuel? (VIDEO)

In the 1960s, everything was ‘just around the corner’ and that even meant outer space. The Jetsons was a favorite television program, jet packs were being tested, there were men circling the earth in spacecraft, and popular magazines predicted colonies on the Moon within a decade. It was in this heady time to be alive that the Gyrojet series of rocketguns, like so many other test rockets of the decade, shot from the drawing board and towards the stars… and promptly fizzled. 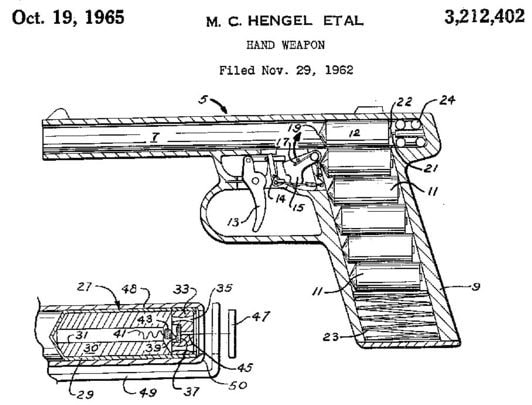 In 1960 San Ramon, California, nuclear weapons researcher Bob Mainhardt and arms designer Art Biehl came together to form MB Associates (after their initials) to explore modern rocket-firearm designs. The pair’s initial pet project was a small handheld flare projector. This projector soon morphed, with an eye to military sales, into a rocket-firing family of weapons. These guns, both pistols and rifles, would be incredibly light (as low as 17-ounces), near recoilless, and powerful. In effect, they would be multi-shot rocket launchers that could be carried and fired by virtually anyone. 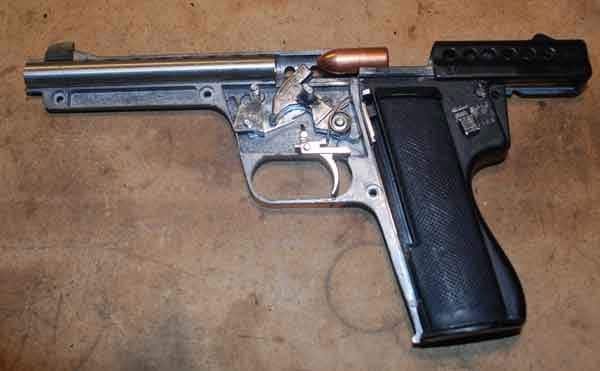 This was all revolutionary cutting edge stuff at the time. For those of you not familiar with the early 1960s, keep in mind that computers were about as common as unicorns, people used rotary-dial telephones manually switched by an operator, TV was still black and white, and the Studebaker was in production.

Bob and Art decided that the heart of the gun was the cartridge and thus the bulk of R&D and production cost was dedicated to the rockets. A non-reloadable brass cased rocket held the projectile and solid rocket fuel burned through a set of four ports on the base upon ignition. If all four jets fired properly, the resulting blasts spin-stabilized the rocket. This gyroscopic spin, like a football being thrown, gave the rocket its name. 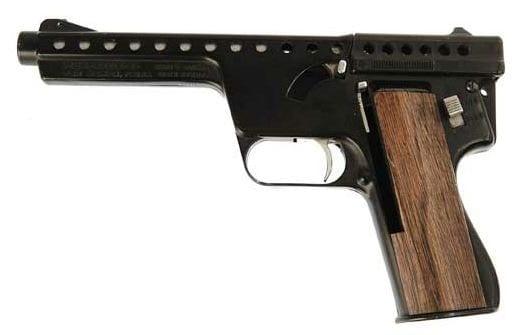 The most common of these rockets were the 12mm and 13mm variants, which were about the same size overall of a .45 ACP round, but the ballistic profile of the rockets was funny to say the least. 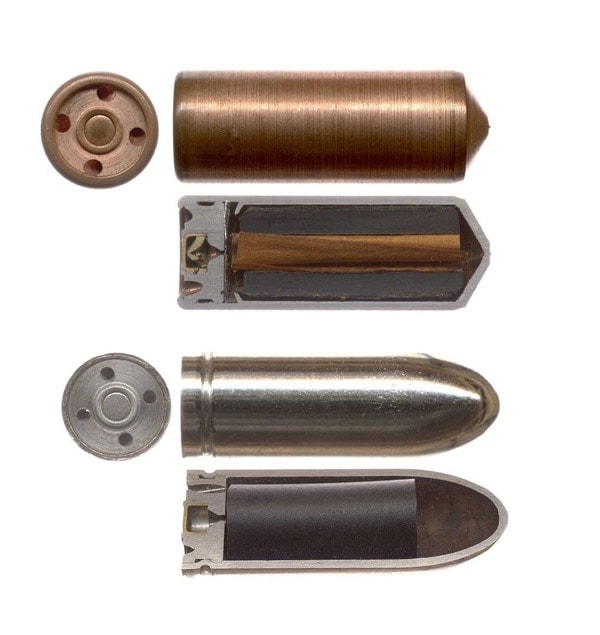 Much like the 5-cent bottle rockets you popped off as a kid, they start off slow, build up speed until the propellant burns away, and then coast until they burnout. The problem with the Gyrojet rocket was that they started so slow that they were ineffective at close range (under ten feet). Since this is coincidentally the ideal range for a pistol encounter, you can see the unmasked hilarity of the situation. Likewise, these rocket cartridges were subject to poor quality control, which led to multiple duds and inaccuracies. When they did work, they produced ballistics similar to a .45ACP round nose at ranges of 15-60 feet.

The gun itself was an inexpensive affair. It was made largely from zamak, a zinc alloy (think Hi-Point) with a very thin steel barrel. A fixed seven-shot magazine loaded through the top of the chamber like the old 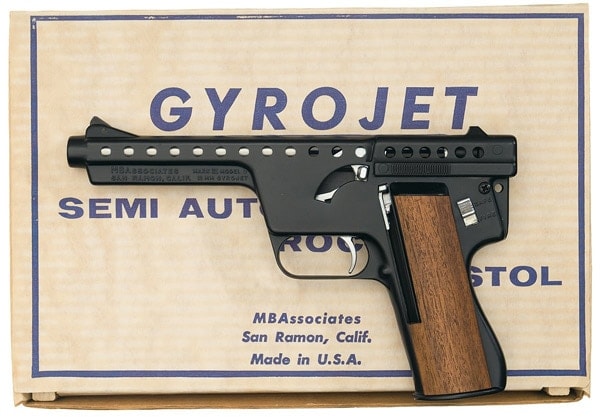 Broomhandle Mauser pistol. Since the entire rocket cartridge fired and left via the muzzle, there was no need to eject spent cases. In fact, the short rear slide was only used when you had to open the chamber to load/unload the pistol. When the very stiff (15-pound) trigger was fired, a protective guard over the fixed firing pin dropped away and the cartridge was pushed backward onto it, igniting the solid rocket fuel inside. The result was a rocket-firing sidearm that looked like a flare gun, sounded like a starter pistol, and was almost as accurate.

Notwithstanding the Gyrojets problems, MBA set about fiddling with the design for the better part of a decade. They never found much commercial success and folded by 1969 but in their time they planned more than 60 different versions of their gun, 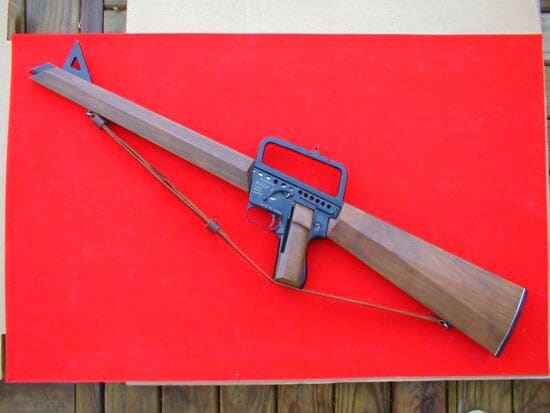 firing rockets ranging in diameter from 7mm to the 55mm Swarmjet (designed to shoot down incoming missiles). Most of these never got past the prototype stage but included such exotic systems as the CIA Dart Gun and the Lancejet underwater spear gun. While most of these non-standard types are in the hands of die-hard collectors they do pop up from time to time. Overall, less than a thousand Gyrojets of all kinds are thought to have been produced, so these are basically one of a kind collectibles and as such their value largely rests in what an individual is willing to pay for one.

Of the ones that did make it into regular production, the model (Marks) I and II pistols are the most commonly encountered. They show up on the popular gun auction sites regularly and tend to sell for about $800-$1000 in functional condition without the 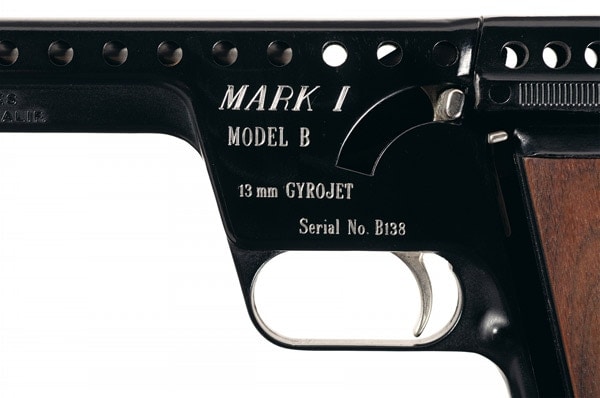 box. They are quite an interesting find and the fact that they often appear in sci-fi and James Bond movies keeps interest alive as does their funky, retro design. A few were used in Vietnam as personal weapons and Presidents including Ronald Regan owned several. Be careful with the old Model Is as their 13mm (.51caliber) rockets are listed as Destructive Devices by the ATF.

The rounds themselves are much harder to find than the guns. Typical prices for these in good condition are $40-$50 a pop and they grow scarcer by the day. Part of 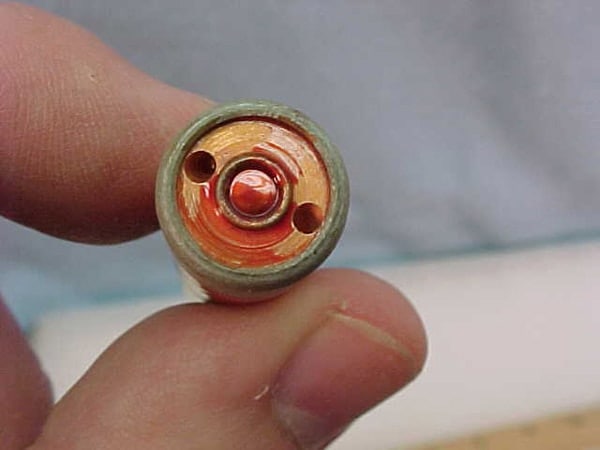 Close-up of primer on Gyrojet ammunition.

the reason is that rare cartridge collectors consider the Gyrojet rounds to be something akin to albino alligators or pygmy giraffes and will seek them out just to have an example for their collection. Currently it’s very possible that if you have a Gyrojet pistol and a box of ammunition for it, the ammo will be worth much more than the pistol. On the seven-shot Model II, fully loading the gun will nearly double its value.

Overall, these guns showed a lot of interesting thought and today, with modern CNC machining and better quality control, a revisited Gyrojet could be effective. Future weapons designers may reach for the Gyrojet if the need for an exotic platform to arm Space Marines fighting in a weightless environment where a recoilless handheld rocket pistol is essential ever arises.

And I’m still waiting for that jet pack too…