When it comes to defending a fixed position, such as a trench or pillbox, from an advancing horde of enemy foot soldiers, the best solution for the individual soldier is a machine gun. This we’ve known for some time.  The problem with machine guns though, is that they overheat after the first thousand rounds and aren’t much good without a replacement barrel after that. Well, if you’re a Guns.com reader it should come as no surprise that John Moses Browning came up with the ultimate answer to this problem a long time ago, even before his legendary M2 won the hearts and minds of the American people, and it was called the M1917 machine gun.

Design of the Browning M1917

The first heavy machine guns of the early 1900s, the Maxim gun and its British Vickers, German Spandau and Russian Sokolov variants, were great big heavy beasts that could spit fire for days. Requiring the services of a six to eight man team to operate these monsters, the guns were capable of firing for hours on end. The bad thing was they weighed often in excess of 140-pounds with their mount and water-filled barrel shroud. Browning had designed a water-cooled sustained fire machine gun as early as 1900, but at the time, Hiram Maxim had almost cornered the market so the inventor/entrepreneur shelved his plans. 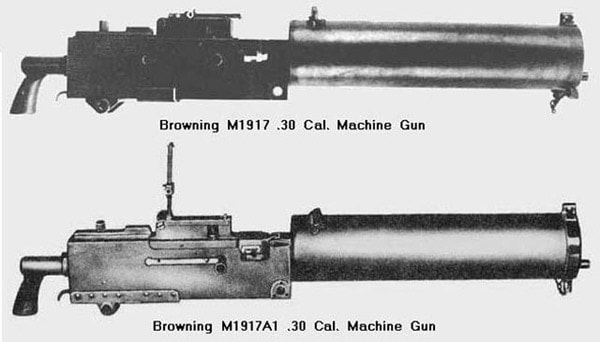 When Browning finally got around to building a prototype in 1910, it was radically different from Maxim’s design. Browning used a recoil sliding-block locking mechanism instead of the complicated toggle-lock that the competition used. This 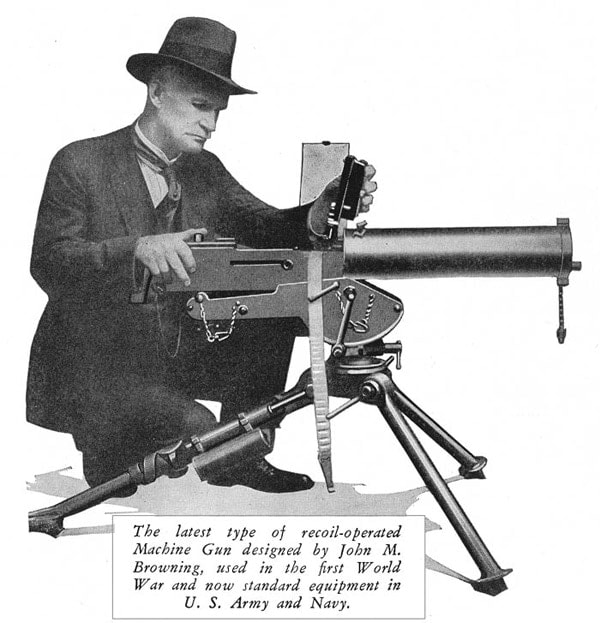 A Browning with a Browning.

made the gun easier to maintain and produce. At only 38-inches long with a 24-inch barrel, the Browning design weighed about 38-pounds when filled with water. When mounted on a heavy steel tripod with adjustable cradle, the all-up weight, including a 250-round cloth belt of 30.06 ammunition, was 93-pounds. While still not a light gun by any means, the lighter design gave it an edge over the Maxim-type weapons and the military found that very interesting. When the US entered World War 1 in 1917, Browning found a ready customer and submitted it for review.

The gun seemed to be just impossible to break no matter how hard you fired it. In US Army testing, the gun fired 20,000 rounds with no malfunctions. The Army ordnance engineers were satisfied with that, but John Browning himself took up the sights, loaded another belt, and started firing the same gun for another 20,000 rounds with identical result. In all, 40 cases of ammunition were cycled through the machine gun in just over two hours.

The Browning was ordered into rushed production for US troops going to France in World War 1. Dubbed the M1917 by the military, contracts were submitted to Winchester, Colt, Westinghouse, and Remington. However, by the time sufficient quantities arrived on the Western Front, the war was all but over. Most US troops in the war had to use French Hotchkiss and Chachaut machine guns, often with poor results. After the First World War, the M1917 became the standard heavy machinegun of both the Army and the Marine Corps, just in time for heroic service in the Second World War.

Heroes behind the gun sights 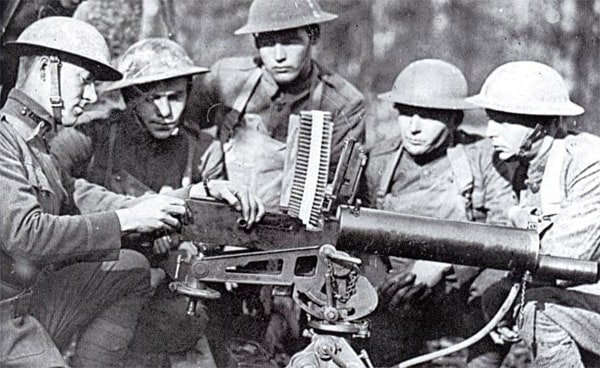 combat. It was behind the sights of this weapon that many heroes were forged. In 1942, Marine legend Mitchell Paige serving as a platoon sergeant in charge of a machine gun section of M1917s found that his unit was all that stood between his battalion being overwhelmed by a determined Japanese breakthrough in the Solomon Islands. All the marines in his section had suffered casualties, so moving from position to position he manned the guns alone. Loading, feeding, and firing the boiling Brownings, he held the Japanese attack at bay long enough for reinforcements to arrive. In a later interview, he recalled that, “I continued to trigger bursts until the barrel began to steam. In front of me was a 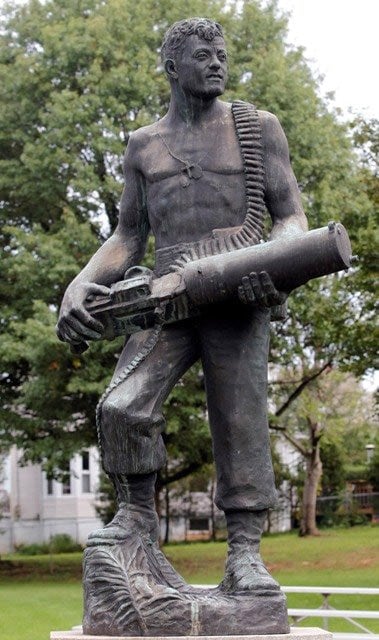 large pile of dead bodies. I ran around the ridge from gun to gun trying to keep them firing, but at each emplacement, I found only dead bodies. I knew then I must be all alone.”

Another Marine, Gunnery Sergeant John Basilone, found his two machine-gun sections at Guadalcanal surrounded and cut off. He fought with these guns until only he and two other marines remained.  Then, running low on ammunition, he fought his way through the encirclement to get more ammo and then fought his way back to his guns. In after-action reports, his section was credited with “the virtual annihilation of a Japanese regiment.” Bastilone was killed on Iwo Jima but a statue of him, carrying a M1917, is one of the most memorable in Marine Corps history.

More than 120,000 M1917s were produced and continued to serve as the primary heavy machine gun for US troops until the adoption of the much lighter (and some would argue much less reliable) M60 in 1957. The government gave away surplus water-cooled Brownings like Moon Pies at a New Orleans Parade to any allied, anti-Soviet country that would take them throughout the 1960s and 70s. Some of these have been imported back into the country and these few (along with some sold by Colt 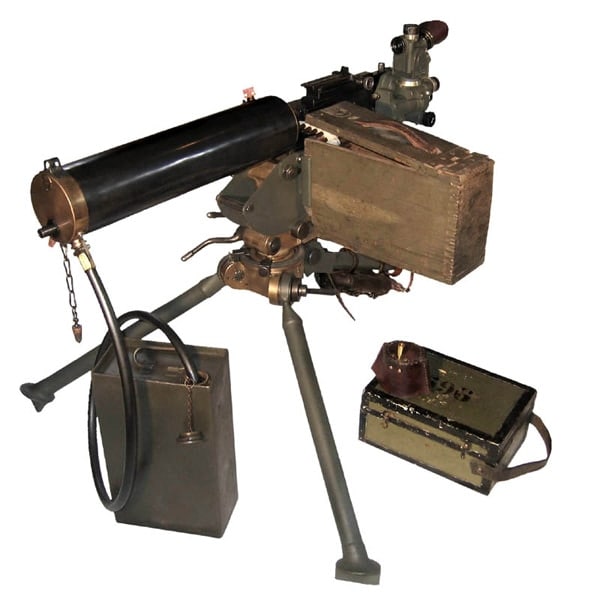 A functional Browning M1917A1 can command five figures on the collectors market.

commercially to prisons in the 1930s) make up the bulk of working Class III weapons in circulation today. Transferable fully automatic models in working and correct condition bring upwards of $25,000 and require the prerequisite ATF forms. However they are a hit at full-auto shoots as they can be fired almost indefinitely providing the gun is in good repair, properly lubricated, and cooled.

For those who want the gun more as a prop or as an accessory to their military vehicle collection, there are cheaper and more popular alternatives. Semi-auto versions, made from new side plates and surplus demilled parts kits, are often available for around $4000 and can be bought and sold by almost anyone who can own a regular rifle (depending on what state you live in). Dummy guns, often built with the same parts kits but on solid side plates, run about half as much and give the same feel, but no bang. Companies such as Ohio Ordnance and Sarco specialize in these guns and their parts.

Therefore, if you are expecting a wave of German stormtroopers, Japanese Imperial marines, or horde of zombies, you may want to look into getting one of these classics. Nothing says love like a belt-fed, water-cooled machine gun.