Like most firearms, the revolver suffers from a very annoying limitation that affects virtually anyone using it in the field: once you fire every chamber, the gun needs to be reloaded. Most of the time (meaning range time), reloading is a minor albeit sometimes irritating inconvenience and time is a no issue. Sometimes however, a bad person or animal is attempting to end your existence and, under the stress of this real-life situation, time is a priceless luxury. It was for just these occasions that the speedloader was created.

The first revolver speedloader patented was that of William H. Bell in 1879. Bell’s device was a simple metal disk with a rotating locking mechanism that held six revolver rounds. When used with a top-break revolver of the time, such as the Smith and Wesson Lemon squeezer, the speedloader would drop six ready rounds in the cylinder extremely rapidly. It is unclear if Bell’s device ever was manufactured, but it certainly seems like the first of its species. 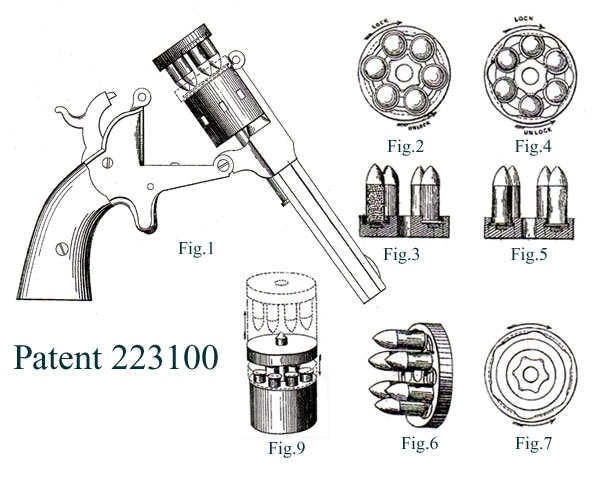 In 1893, one Mr. William de Courcy Prideaux, a subject of Queen Victoria, patented a device he referred to as a ‘cartridge-packet holder’. This device was a circular disc through which 12 spring-steel fingers protruded in six pairs. Each pair held one .455 caliber round for the British Webley style revolver. A later 1914 improved design added a bridge-like handle to the rear of the plate. 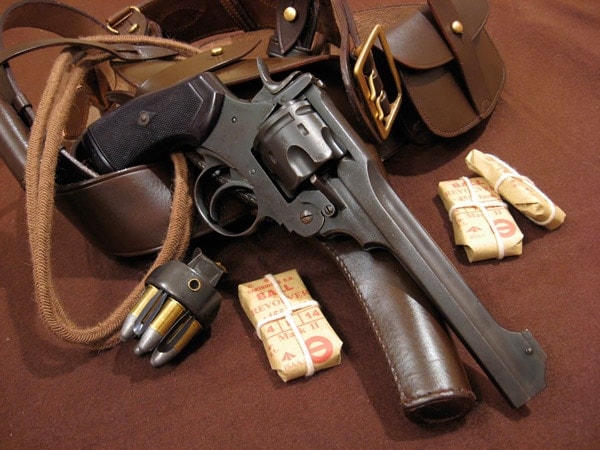 Webley owners in the UK as they allowed the revolver to be reloaded very fast and very efficiently in a high-stress situation (even in total darkness). As you might expect, these neat little gems saw combat with British officers who bought and brought them to the Boer war and later WWI. Today if you are lucky enough to find a real one, they often run $300 or more with collectors.

Although Mr. Prideaux sold many of his devices and even experienced some competition from one Major Arthur Watson who produced a similar loader, by 1919, with the rise of the semi-automatic, revolver speedloaders entered a stage of hibernation. 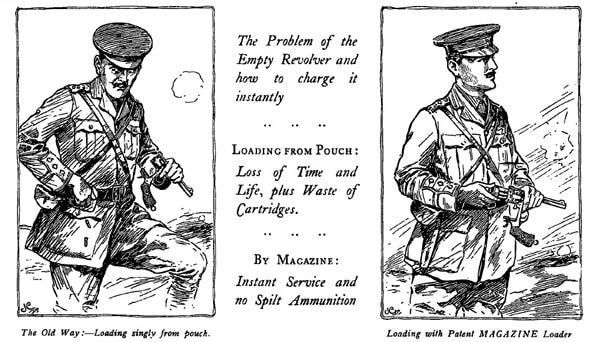 Despite near universal interest in the new semi-automatic handgun design by militaries around the world, one notable gun toting demographic clung to their wheelguns well into the late 1970s: American law-enforcement officers.  For the most part of the 20th century, American police were issued revolvers and if they even carried reloads for them at all, they did so single cartridge belt-loops or in dump pouches.

Dump pouches were so notoriously ineffective that officers typically crammed seven rounds into them rather than six so when they inevitably dropped one, it was no big loss. By the middle of the century, the speedreloader was due for a Renaissance.

Pachmayr of Los Angeles built a rubber-plastic speedloader to the design of J.M. Hunt 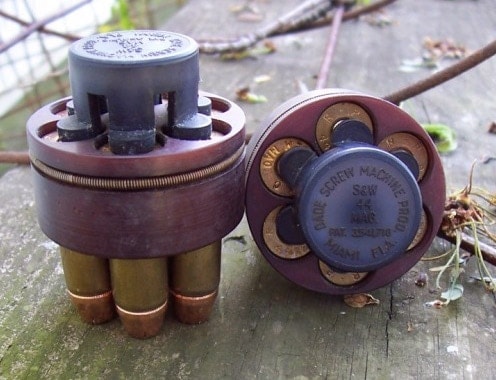 in the 1950s and Matich produced a similar loader in 1965 but they were not very successful. In 1968 Dade Machine Screw Products produced an all-plastic framed revolver speedloader that carried six rounds to line up with the S&W K-frame, L-frame, and Colt revolvers of the day. To make them cheap, light, easy to make and dependable, Dade constructed the body of the speedloader from plastic.  A spring steel loop held the tension on the base of the cartridge to keep them from falling out. Once aligned with the open and empty cylinder of the revolver, a center push-button was pressed to drop the rounds into the chambers. This meant that the average shooter after a little practice could reload their revolver in under four-seconds whereas reloading each individual chamber by hand often took several times as long.

Dade loaders were the top of the line gee-whiz geardo invention of their time and, like the earlier speedloaders, individual police officers across the country began to buy them with their own money. The fictional San Francisco Police Inspector Harry Callahan in the Dirty Harry movies carried Dade speedloaders for his .44 Magnum, which no doubt, contributed to the enthusiasm of their adoption. By the late 1970s, enough speedloaders were out there that departments started buying them for their officers and training in their use. This saw two other companies, HKS and Safariland begin to produce their own, much improved versions of the plastic-bodied circular revolver speedloader.

Today, decades after the semi-automatic pistol supposedly stuck the last a nail in the coffin of the wheel gun era, there are more speedloader options than ever. Safariland offers their popular Comp-series in no less than three different models for CCW, 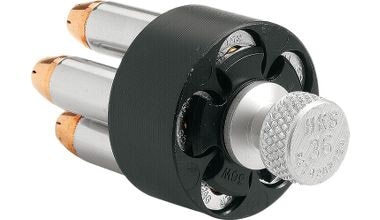 police, and competition use for almost any 5-6-7-8 shot revolver out there. HKS still provides their twist-knob speedloaders, which are standard in security and law enforcement circles that still issue revolvers. There have probably been more HKS Model-10A speedloaders made than there are revolvers to fit them.

For those looking for something different, many smaller shops build custom and near-custom presentation-grade speedloaders to order.  One of the better known of these smaller players is Five Star Firearms who make their loaders from high-grade billet aluminum with stainless steel inner workings. They even make an anodized green ‘zombie’ speedloader (of course!) complete with engraved biohazard markings.

For an accessory that is over 130-years old, the speedloader just keeps evolving. Looks like Mr. Bell was really onto something way back in 1879.