Today every squad of soldiers or marines has at least one fully automatic man-portable light machine gun issued to it. In 1918, this concept was foreign and a firearm that could fill this newly arrived at need was non-existent. Not to worry though, that most genius of American firearms engineers John Moses Browning, had something up his sleeve. The Army called it the M1918, but the troops just called it the BAR.

Prior to 1914, land combat was just a continuation of war as it had been in the time of Napoleon. When World War One erupted this illusion was rapidly shattered by quick firing mobile field artillery, long range bolt action rifles, belt fed machine gun and that grim reaper of a lost generation—mustard gas. These technologies broke the mobility of marching men and charging horses, exchanging open engagement for the soul depleting trench warfare that typified that conflict. When the US entered the War in 1917, the only machine guns on hand were heavy, overly complex, and most importantly, rare. With the great republic mobilizing millions of doughboys to fight the Kaiser, the US needed thousands of new light machine guns. In an upgrade of tactics alongside technology, these guns were to be deployed down to the squad level rather than at the battalion level to maximize firepower.

For this new need, John Browning introduced his Browning Automatic Rifle, a shoulder-fired light machine gun that fired from a box magazine. Not only could it be operated by a single man, it also could be produced in great numbers due to its simplicity.

The gun was an instant hit with Uncle Sam.

The gun fired from an open bolt, used a gas-piston toggle link operation and utilized a tilting breechblock to achieve a full-auto cyclic rate of some 500-600 rounds per minute. Originally select-fire (later versions like the M1918A2 were FAO) to either single or automatic, the BAR was capable of empting a 20-round detachable box magazine in just two seconds when wide open. To conserve ammo, most gunners learned to fire in short 2-3 round bursts (eventually a standard firing mode).

Weighing in at just 16-pounds, it was a good bit heavier than the 9-pound Springfield 1903 rifle of the infantry, but still lighter than the light machineguns of the era such as the 28-pound Lewis Gun. With a 24-inch long barrel and 47-inch overall length, the BAR had a respectable 31-inch sight radius from the front post to the rear leaf.

Today the M1918 is a strange gun that is seen as being an assembly of compromises. It was far too heavy to be a rifle, yet could not keep up enough firepower to be a true squad machine gun due to limited magazine capacity. The closest historical companions for it are the 1960s battle rifles such as the FN FAL, HK G3, and M14 that also suffered the same failings. Instead of being manned by a two to three man crew, the BAR could be issued to a single soldier who could fire the weapon in all three standard positions. The concept of “walking fire” in which the gun could be mounted with its butt against a belt attachment and fired continuously while charging across No Man’s Land was seen as the way to break stalemates in trench combat on the Western Front.

With a design period that was only a couple months from initial concept to full rate production, the first BARs were sent to France by early 1918. 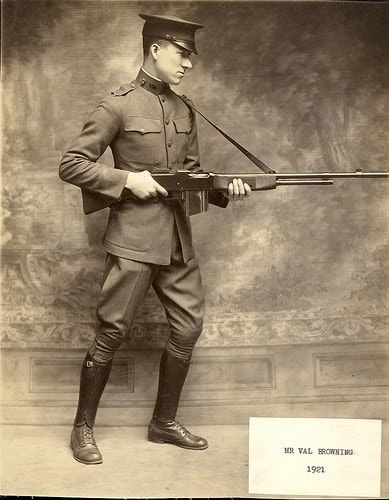 The gun was carried into combat on September 13, 1918 with the US Army in France by no less than John Browning’s son Val Allen Browning, at the time a 2nd Lieutenant in the 79th Infantry Division near Verdun.

It quite literally blew people’s minds and would go on to make an impact in the last years of the war, disproportionate to the numbers of specimens issued.

First of all, don’t get this gun confused with the BAR semi-auto rifle. That BAR is a completely different design than the M1918, sharing no parts, and very few operational concepts (other than the name Browning).

Far from a select-fire military weapon it is a hunting rifle designed by Marcel Olinger and Bruce Warren Browning—not John. The M1918 BAR is a man-stopping battlefield harvester of Nazis; the other is a critter getter. 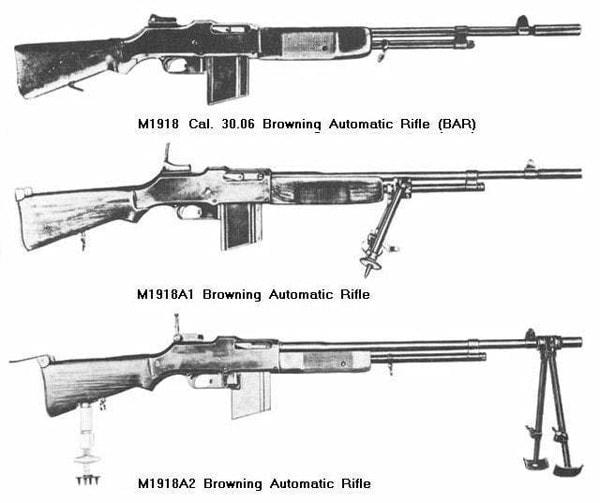 The original WWI era gun, the M1918 was produced for just two years, with some 102,125 guns made by Colt, Marlin-Rockwell, and Winchester. These guns had no bipod, a checkered forend, and thin flash hider. The experimental M1918A1 was made in small numbers in 1937-38 and had a large bipod with spiked feet set forward of the fore grip. Most of these early guns were given away as military aide to Great Britain and other allied countries during World War 2, making them rare even on the parts market today.

The M1918A2 was brought about in 1940 with a lot of input from the Army. Some 229,000 of these guns were made from 1940-1953 by IBM (not that IBM), New England Firearms, and the Royal McBee Typewriter Company. They are two-speed full auto only, have a the flat-footed bipod attached to the conical flash hider (usually the first item that GIs threw away), a rate of fire reducer similar to the one found later in the 1960s Czech Skorpion machine pistol, a smaller uncheckered forend, and a shoulder rest on the butt.

Colt sold a few Monitor rifles with pistol grips and Cutts compensators in the 1920s and 30s, mainly to the FBI who kept them around to fight bootleggers for several decades. Bonnie Parker and Clyde Barrow used stolen National Guard BARs on their escapades in the 1930s before dying in a hail of bullets in Louisiana. Found in their death car were three 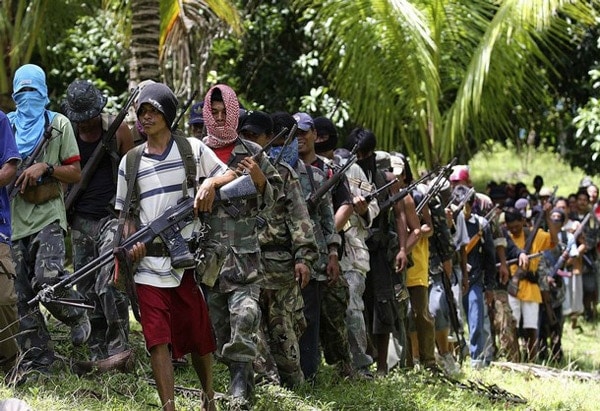 BARs on loan to Philippines rebels, 2008.

of the weapons along with some 3,000 rounds of ammunition. It was fitting that the guns used by the six officer ambush party that took down Bonnie and Clyde that day included a BAR used by Deputy Sheriff Ted Hinton.

The Army liked the gun so much that they carried it throughout not only WWI and II but also the Korean conflict and into Vietnam. The last BARs were not pulled out of National Guard Armories well into the 1970s when they were withdrawn and torched. Many US allies received the BAR as military aide, continuing to keep it as a battlefield weapon for decades longer. The Nicaraguan Guardia Nacional fielded the gun at the squad level as late as 1979 against Sandinista rebels. Today they are still encountered in the field in some third world countries in various hands and conditions.

Overseas, Poland made their own, as did FN whose Model 30/D was the improved version of the M1918 with a lighter bipod, a pistol grip and quick-change barrel.  It was popular worldwide in the 1930s. In Sweden, the gun was dubbed the M21/37 and married both a pistol grip and a slightly curved box magazine to the original Browning design.

A handful of Colt Monitors and M1918s of various marks and grades are out there as transferable Class III machine guns. They run about $40,000, but if you are worried about storming a beach held by Imperial Japanese Marines anytime soon, they are worth every penny. 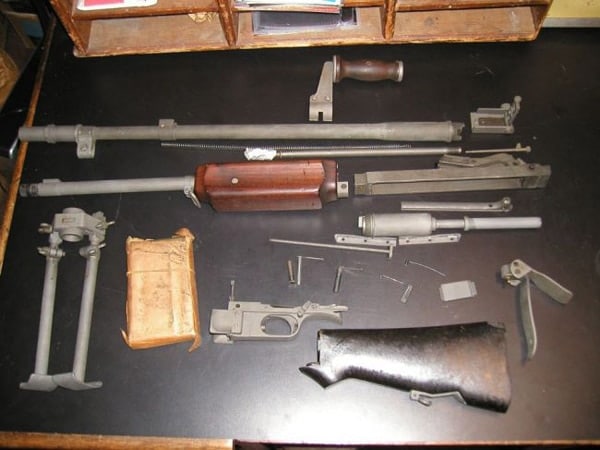 Parts kits have been popular for years on these majestic old guns and today can still be had in about 99% condition from BMG Parts and Sarco and others for about $2K. Once acquired these kits can build either a non-firing replica gun or a semi-auto rifle. Philadelphia Ordnance sells 80% complete dummy receivers machines from a sold plat of 8620 steel for $450 to help your build. Forgotten Weapons has an abundance of manuals and drawings of the BAR for free download at their website to help with any build. However, stay clear of FN kits and the Swedes; they are metric while every other BAR part is SAE.

In 2009, Ohio Ordnance began production of their M1918-SLR new build semi-autos that fire from a hammer-fired closed-bolt mechanism. The Ohio rifles are very similar to the original but run about $4100.

Still, if you have a hankering for old WWI/WWII gear, it’s hard to go wrong with one of these classic aught-six spitters.