In contrast to stealth doorway entry, breaching a door is a very dynamic, committed way to enter a room or building and as someone with SWAT experience, I can tell you it also very exciting.  Oftentimes busting down the door is the only solution (like in hostage or time sensitive situations), but this action must also be done as tactically as possible; there is much more to downing a barrier and taking a room than just a show of presence and brute force. 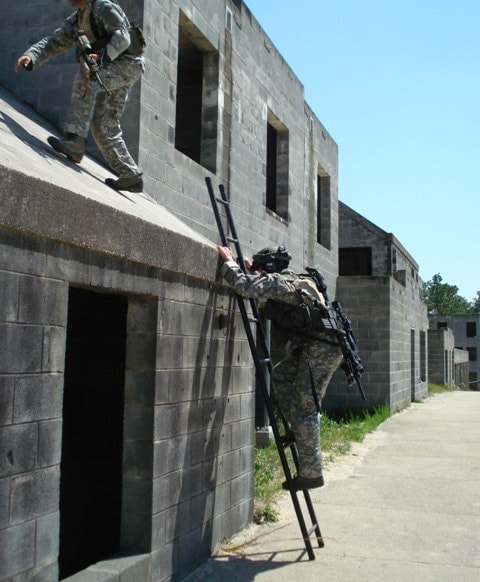 SWAT and military operators have specific roles in their units and one well-documented role is that of door breacher.  Before these specialists approach a door, they have already formed a plan of attack (which starts with the method of breaching best suited for the task) by doing a good deal of terrain recon.

Their recon must also include maintaining security (i.e. situational awareness) and successfully identifying any improvised explosives or other booby traps.  Breachers are responsible for all this thinking and the job of busting down the doors in a ferocious, powerful way.

Though you may never be on call with your local SWAT team, a citizen trained in self-defense should have at least an understanding of how to force their way into a room, for those moments where seconds mean the world. To help with that, let’s do a rundown of the four main ways to bust down a door: 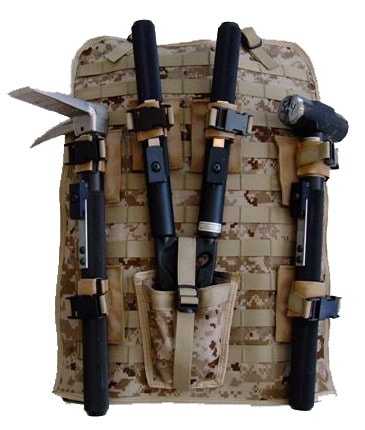 Mechanical breaching is by far the most encompassing method of door entry.  It covers opening doors with anything from a key to a lock pick to a battering ram to a stiff kick. Depending on the type of door, a Breacher might use hydraulic spreaders, the proverbial “jaws of life”, or even a gasoline powered rescue circular saw to detach the door from the frame.

These last approaches may be more professionally oriented, though the simplest of breaching equipment can be improvised in almost any home and used to great effect in a pinch. Since most external doors in Western civilizations open inward, a battering ram is a great choice.  Weight is your friend here, so find an object that is manageable but heavy (a large piece of wood or heavy pipe is a good option and you can attach handles before hand if you like). The best place to aim your blows is at the latch, lock or handle, though the hinges can be alternative weak spots if the first is not working.

For inward opening doors a hooligan (sometimes written halligan) tool is the best option, along with a 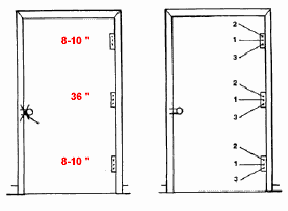 Diagram showing weak points on most doors. Breachers should focus their efforts here.

sledgehammer or an ax.  To improvise a hooligan, consider a single or multi-pronged vertical assault hook, like those used for climbing for instance.  Use this tool to pry at the doors weak spots mentioned above or use the ax/sledgehammer to smash these areas out of commission.

If the door has a window, a very effective technique can be employed with a hooligan and a vehicle of some kind; it works great for downing heavily fortified doors (like most home’s front doors). A rope is attached to both the hooligan and the vehicle.  The assistant or secondary Breacher breaks the window with hooligan and quickly hooks the sharp prong to a solid part of the door. A silent signal indicating “all clear” is given, and the vehicle drives forward at maximum speed, ripping the door clean off it’s hinges. 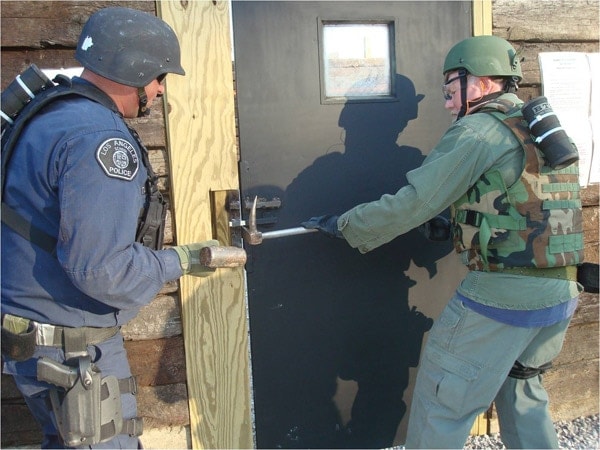 This entry technique can be super dynamic, startling the occupants inside and giving operators a good tactical advantage in the surprise department.  This principle is more pronounced in other methods though. 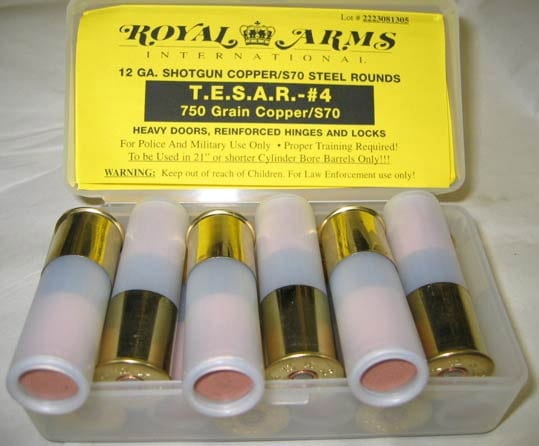 With specialized 12-gauge door-breaching rounds (still available to civilians), door locks can be obliterated in seconds.  Door busting shells are usually frangible rounds, such as the TESAR or Hatton, and are the safest option in terms of ricochet as the projectiles turn to dust upon penetrating the door and their energy quickly disperses.

In ballistic breaching, the Breacher needs to place the shotgun at just the right angle, and the right place, before they shoot. Aim halfway between the lock/handle and the doorframe, downward at about a 45 degree angle and as close as possible with the muzzle contacting the door.  If you feel like you may “short stroke” the gun upon cycling from this position, you’ve found the sweet spot. Using a push/pull method with a pump action shotgun is best way to keep from short cycling (and the wrist from not aching) after the shot.  Adding the pull allows for a quicker, more deliberate pump action manipulation. 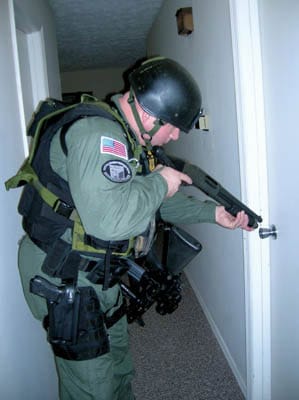 Shotguns can also be outfitted with breaching attachments for door/lock/hinge destruction. These breaching devices look like brakes or suppressors and allow for the just right amount of distance from the gun and the door/lock to eliminate cycling malfunctions. It also helps to ensure the muzzle of the shotgun doesn’t split from the force of the blast.

Most doors are breached with ballistic shotguns with one or two rounds, depending on how many locks are on the door—and using the right kind of specialized rounds, of course.  Using standard shotgun shells with buckshot or birdshot can result in over-penetration and injuries while slugs have the highest rate of ricochet in this situation.  I do not recommend using anything but specifically designed door breaching shells to break open doors.

Blow torch-type cutting tools can be effective under the right conditions, even underwater, but, in my experience, I wouldn’t say they were any Breachers favorite method. Thermal breaching has the tendency to put out an unmistakable burning smell, as well as smoke, not to mention heat, light and noise.  Additionally Breachers have to contend with wearing proper thermal gear (e.g. shaded eyewear, clumsy heat proof gloves) and a mobile fuel source, often carried with the operator. Given the choice, most shooters do not prefer to have a pressurized canister on their backs, regardless of what’s inside of it, when there is the potential for bullets to be flying. 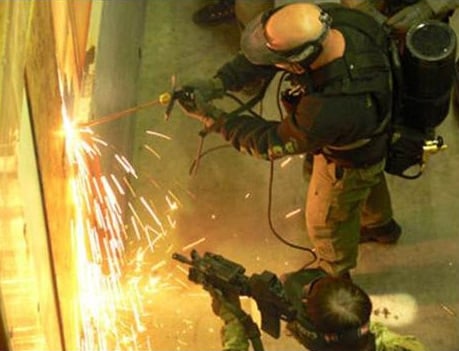 Thermal breaching is not most Breachers preferred method of forced entry.

Thermal cutting tools are rarely used, but definitely need to be in the inventory of a skilled Breacher—there are certain metal doors that present no other way of forced entry. In terms of your toolkit, remember the axiom: “It’s better to have it and not need it, than to need it and not have it.”

Kaboom! The blast obliterates structures to create just the right size opening or enough to destroy or bypass the locking system. This is what most people envision when they think of a SWAT team breaking into a fortified structure. 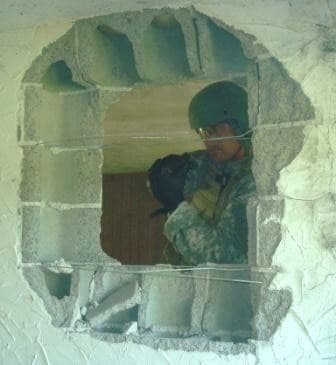 Explosive breaching requires some stand off distance after placement, group organization and technical know how. The tactical team needs to be behind cover, like a ballistic shield, around the corner of a wall, or simply far enough away to avoid getting their heads rattled, but this distance needs to also account for how close they will need to be to get into the structure quickly. As such, explosive Breachers need to remember mathematical formulas like their own name because a “mess up” could not only jeopardize their own safety by the lives of their team. It’s hard to shoot guns if your fingers are missing.

Multiple charges can be used and prepped prior to placement, from water charges which push the door in (and sometimes to smithereens) to linear-shaped, cutting charges that create fairly precise holes.  Because of this, explosive breaching is usually beyond the scope or clearance level of most civvies.

As exciting as some breaching methods can be, they can also prove frustrating and nerve-racking depending on the situation and the door being breached. This is why the number one thing the Breacher does before entertaining any of these breaching methods is check to see if the door is unlocked first.