The M1910 Maxim Sokolov Machine Gun: The gun wheeled around the world (VIDEO)

At first glance, it seems like something from a steam punk fantasy. With more parts in common with an early automobile than a modern machine gun, the Russian M1910 Maxim Sokolov variant represents a thought process from a very different age. But what make this gun truly amazing is that while the technology of its day is long gone, it is not uncommon to find this hearty century-old gun still in service on the battlefields of today.

Why a wheeled machine gun 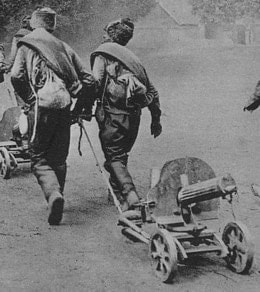 Today we are used to driving from place to place over nice paved roads in automobiles that have computers in them to keep them from driving too far over 100mph. Back in the 1900s, roads from city to city were made of dirt that turned to thick mud in the rain; even in the industrial United States, there was no such thing as asphalt. In 1903, it took an epic 63 days to cross the US from coast to coast by automobile—the roads in 1903 Russia were far worse. The primary means of transport for the Tsar of Russia’s 15 million man Imperial Army was by the soles of their boots. With the heavy water-cooled Maxim guns issued to them weighing in at 60 kilos, even the strongest Ivans found it a tough hump.

With this in mind, the Tsars machine gunners got a set of wheels.

Invented by the American-born British inventor Sir Hiram Maxim in 1889, the machinegun that bears his name was the worldwide standard for automatic weapons by 1900. The militaries of Germany, Great Britain, as well as the US Navy among others had it in regular service. When the Russians adopted it, they greatly simplified the design to make it as soldier proof as possible. With the adoption of the short-wheeled mount and a steel plate shield to protect the gunner, the gun became known as the Pulemyot Maxima Sokolov Model of 1910, or simply PM 1910.

The gun used distinctive and easily recognized short recoil and toggle locked mechanisms that gave users the feeling of holding onto a steam locomotive when fired. Rear spade grips served as handles while a solenoid button 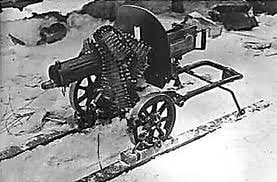 Maxim on skiis in WWI.

between the grips, pushed by the thumbs, fired the gun. Capable of rattling off ten rounds of ammunition per second, the gun would overheat quickly. To keep it cool enough to fire continuously, a 4-liter water jacket was fitted around the 28.4-inch barrel.

To keep this jacket from boiling empty from the red-hot barrel inside it, a water can, condenser collector, and tubes were supplied and an oversized cap on the jacket, about four inches in diameter, could be opened to pack the insides with snow in the winter.  In a pinch the whole gun, wheels and all, could be attached to skis and pulled over the steppes when the snow got too deep.

The weapon has a low profile to the ground, less than two feet, which leads to simplicity when firing from a prone position. Gun crews were also issued simple stands to elevate the guns if needed. 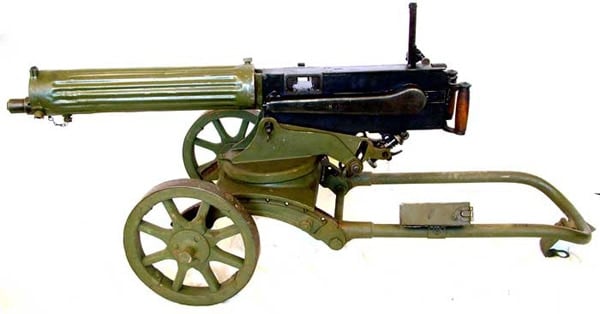 Simplicity and durability were a rule in these guns. It must be remembered that conscripted Russian peasants fresh from the farms and with no mechanical background had to be trained to use and maintain these guns. The 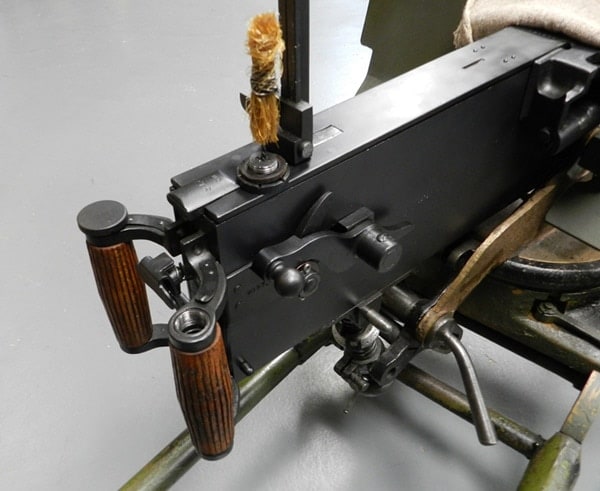 two spade grips concealed reservoirs that held lubricant and solvent. To apply these, you just unscrewed the top caps of the grips, to which were attached applicators inside the reservoirs. To clean the solid milled steel breechblock, an operator just opened the lid and lifted it up and out.

Watertight 22-pound ribbed green metal cans held 250-round canvas belts of 7.62x54R ammunition. Even when many armies switched to metal links, the Russians retained these canvas belts because, when properly waxed, they were almost impervious to freezing and could be reused in the field without a linker. Another metal can held three modular cans of water, solvent, and lubricant. This kept the Maxim pumping out rounds non-stop at methodical rate of about 600-rounds per minute as long as the ammo held up. 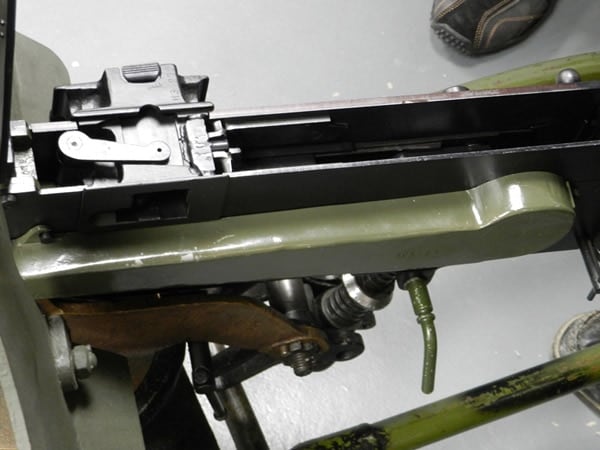 None of these heavy steel parts, thick ballistic shields, canvas belts, birch wheels, and other required accessories were very light. All told a fully equipped PM1910 could tip the scales at 170-pounds including ammunition, water, and solvents/lubricants.  However, as the Russian arms peddler Boris the Bullet Dodger said in the 2000 film Snatch, “Heavy is good. Heavy is reliable.”  Weight is indeed a sign of reliability, at least in a water-cooled machine gun, but you can see why these were set on wheels.

When the Cossacks and great waves of other infantrymen marched across the Carpathians and Eastern Prussia in 1914, the PM 1910 rolled along with them into World War 1. In thousands of often forgotten engagements, the Russian army used the Maxim guns to good effect from the mountains of Armenia to the coast of the Baltic Sea. While in the end of the first horrible world war, Russia signed a humiliating peace after losing more than 3-million dead, their Maxim guns managed to save the day on countless occasions. 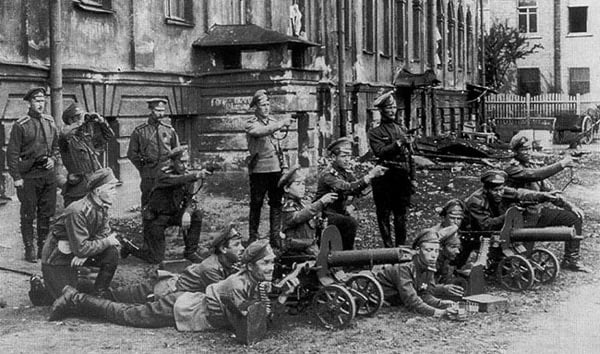 Crew of Soviets with Maxims.

After the war, they became one of the decisive weapons of the brutal Russian Civil War (1917-1922). It was during this conflict that maxims mounted on the back of peasant buckboard type carts known as tachankas, pulled by fast horses.  These rigs were a direct precursor to modern vehicle-borne warfare. 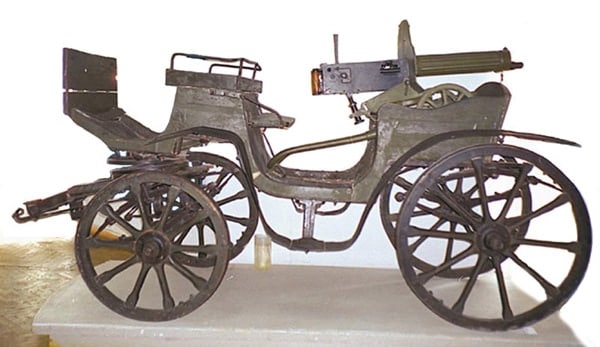 After the Civil War, PM 1910s remained both in production and in use with not only with the Soviet Army but also in countries such as Finland and Poland who had inherited large stocks of them. This put the heavy old bruiser in 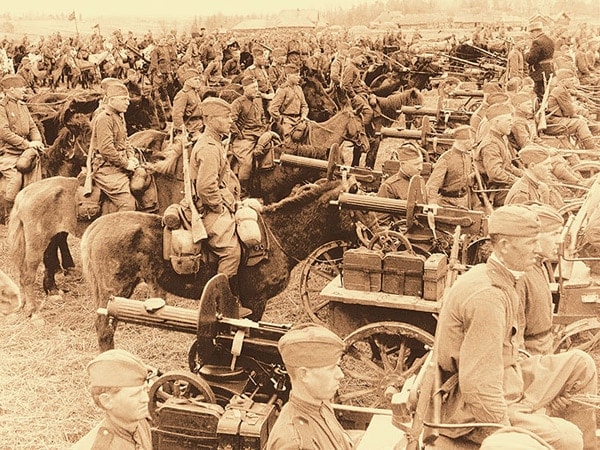 heavy combat once more during the Second World War where Soviet Frontoviks used the same guns in many cases that their fathers and grandfathers had before them.

By 1945 the PM 1910 was finally being replaced in front line service in the Motherland but was consequently given away as military aide to dozens of peace loving worker’s paradises. This kept the design popping up in the hands of fighters from North Vietnam and North Korea to Nicaragua, and Angola. Lately they have made cameo appearances in Syria, Iraq, and Libya. Today, more than 130 years after Mr Maxim’s initial concept and a good century past the improvements of Mr. Sokolov, US troops still occasionally come across these in weapons caches in Afghanistan. 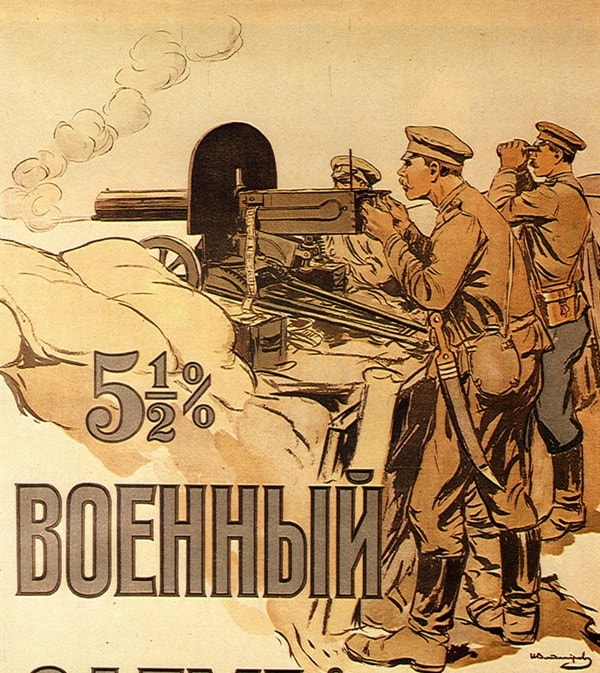 The Russian/Soviet Maxim is a hit with collectors in any format. With so many popping up after the peace dividend of the 1990s on the international surplus market, parts kits for these guns fell to as low as $500. Rebuilds of dummy guns on solid receivers go for around $3000 today. A few individuals that are more enterprising have built semi-auto versions from old parts kits that have been ATF approved. Midwest Metal Creations among others are in the business of selling semi-auto only sideplates for those who are interested and have the scratch.

On the bright side, 7.62x54R ammo was cheap. It’s also heavy, and reliable, like the gun it was made for.