The Mossberg Brownie: Did you know they made pistols? (VIDEO)

Did O.F. Mossberg and sons ever make a pistol? When someone says the word ‘Mossberg’ most gun enthusiasts say, “shotgun” and leave it at that. Folks in the know usually then pipe up and inform the short sighted that for decades and still the company has made rifles. But then there is that one guy who just smirks because he remembers that yes, Mossberg did make a pistol a long time ago and it’s name was indicative of its stature—the Brownie.

Swedish immigrant Oscar Frederick Mossberg came to the US in the 1880s from Europe. Once here, he found work with the Fitchburg, Massachusetts based bicycle company, operated by fellow Scandinavian immigrant Iver Johnson.   The two would work together not only on velocipedes but also revolvers.

When Mossberg left Iver Johnson, he went on to manage the small factory of the C.S. Shattuck Arms Co. in nearby Hatfield, Massachusetts. From there he went to work for Stevens and finally for New Haven, Connecticut based Marlin-Rockwell. In 1919 when Marlin Rockwell went belly up (they primarily made machineguns and WWI had just ended), the unemployed 53-year old OF Mossberg, and his two sons started a new firearms company of their own. 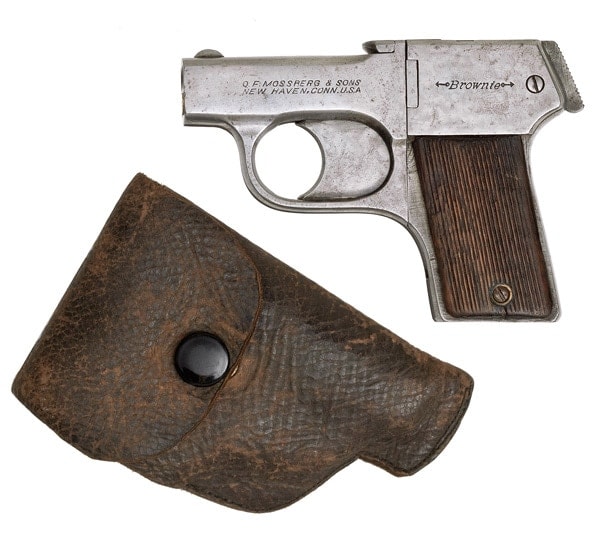 This new company needed a flagship product: one that was simple, effective, easy to manufacture and quick to turn a profit. This is a tall order for any entrepreneur, which may have been what led Oscar to start piling through old notebooks and ideas he once had in search for a guaranteed seller.  While at Shattuck years before, Mossberg had designed a 4-barreled .22-short caliber handgun that fired each barrel in turn using a rotating striker/firing pin. Shattuck had marketed the gun briefly, first as the “Unique’ then as ‘The Novelty’ before Shattuck went out of business in 1915. With the patent reverting to Mossberg himself, he reworked the gun, stretched it to fire the more potent 22LR, and named his new gun (with a new patent number) the Brownie.

The gun itself was excessively basic. Two sets of two parallel barrels sat in a square block. A trigger mechanism in a rounded trigger guard cocked and released a striker on a rotating plate with each pull that fired chambers one, two, three, and four in sequence. The Brownie was made on a blued, soft metal frame with 2.5-inch mild steel barrels and equipped with grooved black walnut grips. Sights consisted of a small fixed notch and groove along the top of the barrel assembly. Overall length of the small pistol was just four inches long with a loaded weight of about 9.5 ounces. 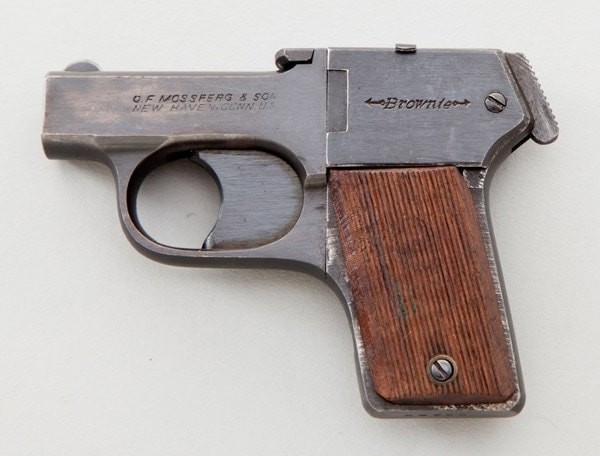 Mossberg Brownie, side view with bluing.

Mossberg Brownie advertisement 1926. The pistol was marketed as a trappers’ gun.

To load/reload, a lever released the barrel block and flipped open on a hinge action like a derringer style pistol. A manual extractor rod, hidden in the side of the frame, allowed the user to push out the spent rounds.

Unlike Mossberg’s earlier Unique pistol, the Brownie could fire 22 Shorts, Long, and Long Rifle rimfire rounds, which gave it a margin of flexibility.

The gun was introduced to the world by the brand new OF Mossberg and Sons Company for just $5 in 1920 and originally advertised as a keen little popgun for trappers to keep in their pocket when checking their sets. Of course, it was also the bees knees as a concealed carry piece—no fooling. Being cheaper than a small Colt or Browning vest gun, and carrying twice the firepower of a traditional derringer, the Mossberg Brownie found a ready niche market and enjoyed a solid reputation.

These little four banger 22s are crazy collectible. While they generally aren’t considered shooters today due to their weak metallurgy and scarcity of spare parts, they still carry a lot of 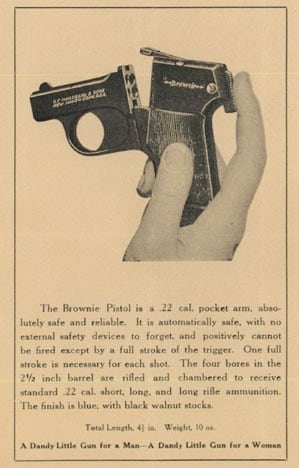 Mossberg Brownie advertisement, “a dandy little gun” for the ladies.

value as curios. It remains to this day Mossberg’s only production handgun and is credited with being the company’s gateway into the gun community.

Between 33-37,000, Brownies were made from 1919 to 1932 in no less than four slightly different variants. These guns run anywhere from $150 to well over $400 depending on condition, variant, and how much the seller wants to part with it. These old guns are all Curio and Relic eligible so think twice and have them inspected before shooting one. Even then, it is probably a good idea to stick to 22 CBs and leave the Stingers for a different popgun.

You can tell your Brownie is real by the ‘OF Mossberg, New Haven CT’ marking on the left hand slide and the stylized ‘Brownie‘ inside of an arrow roll mark over the left grip. Dating your gun is more guesswork than anything is as the production records have been lost to time. One Brownie hoarder maintains a labor of love web page that has more information on how to tell which variant you have as well as a serial number project if you are curious. 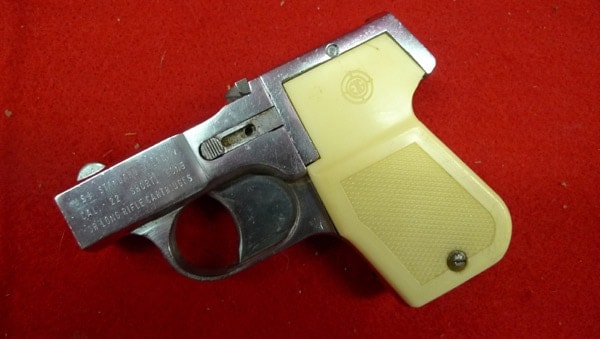 Italian EIG pistol knock off of the Mossberg Brownie.

During the 1950s and 60s the Italian firm of EIG made a pot metal 4-shot/4-barrel 22 that seems to be a dead ringer for the Brownie. This gun had loudly colored plastic grips and sold for a few dollars before the GCA of 1968 stopped importation of this knock-off. American companies Advantage Arms and Cobray picked up where EIG left off and have made their own Brownie-ish 4-shooters since then. 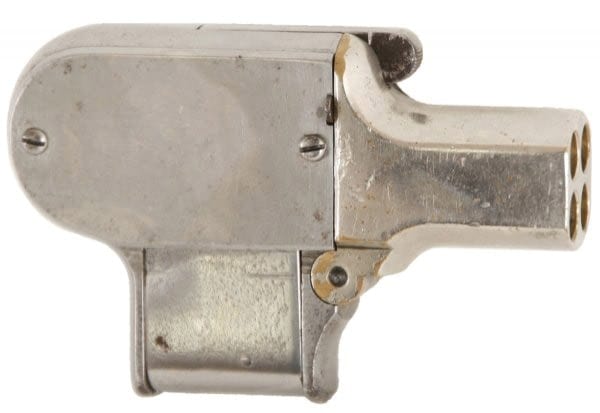 The Shattuck Arms Unique pistol, based on the design of the Mossberg Brownie.

Mossberg, on the other hand, switched to shotguns (and the occasional rifle) and hasn’t made a handgun since Roosevelt was elected.

Guess they swore off Brownies.