Long before Gaston Glock stopped building curtain rods and moved on to polymer pistols, the Austrian firm of Steyr was producing innovative handgun designs. One of their most curious and downright oddball offerings was their Model 1912.

The Austria of today is a small country about the size of Maine. The Austria of 1912 however was much different. With a population of more than 50-million people, it was the center of the Austro-Hungarian Empire and included almost half of central Europe including what we know today as Hungary, the Czech 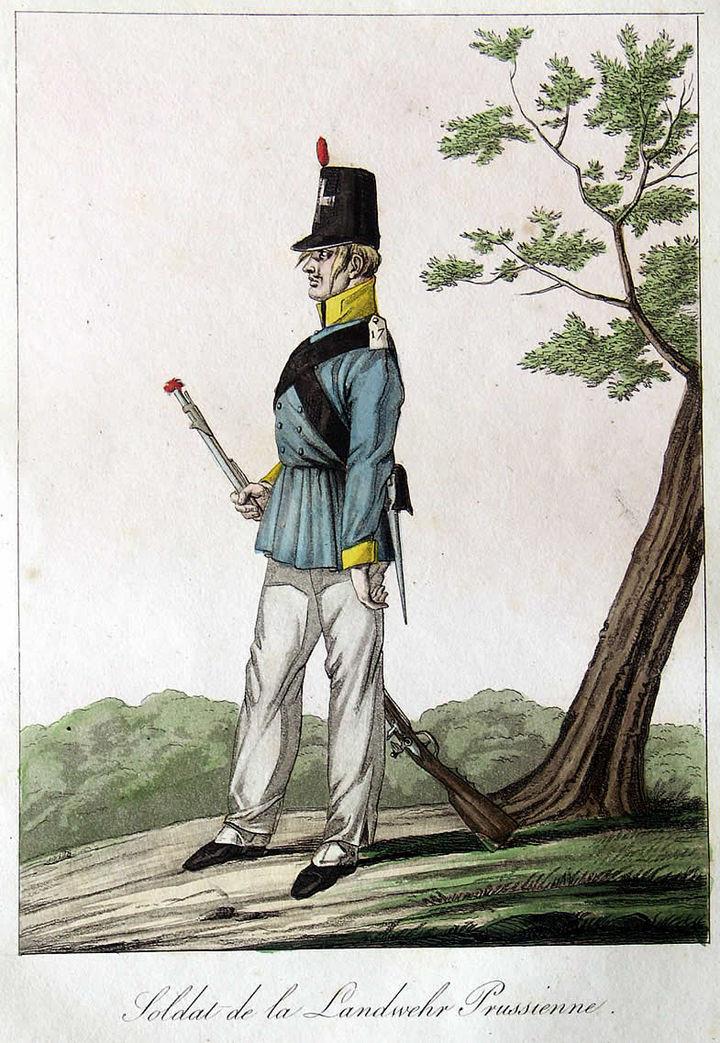 Republic, Slovenia, Croatia, Slovakia, and of course, Austria. This polyglot country had a large army of more than a million men when mobilized. Poorly led but massive in size and brilliantly equipped, the Austrian army used some of the best small arms, machine guns, and field artillery of the time. When you realize that the companies that are now Steyr-Mannlicher, FEG, and CZ were behind these weapons, it’s easy to see gun making is in their blood.

In 1911, the regular Army was equipped with the striker-fired 8mm M1907 Roth-Steyr. To arm the Austrian Landwehr, a form of National Guard, the government of the Kaiser (they had one too), needed a new and modern pistol. While the regulars had a new handgun, the reservists of the Landwher still had to make due with old Gasser revolvers. With war in the neighboring Balkans and a looming crisis with Tsarist Russia, the time for an upgrade was at hand. 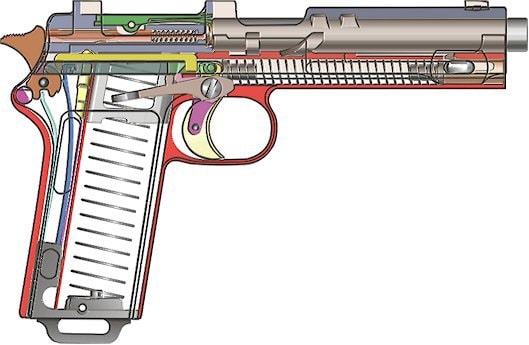 Czech inventor and firearms engineer Karel Krnka, father of a number of interesting rifle and pistol designs, along with help from others worked out the development of what was to become Steyr’s 1912 pistol. Krnka had been the brains behind the M1907 Roth-Steyr and borrowed certain elements for his new pistol from that gun. Both guns are large frame semi-automatics that have a fixed magazine instead of the now-universal detachable magazine. To reload the Steyr you feed an 8-shot single stack stripper clip (yes, clip), like the common military rifles of the day, through the top of the action. Besides the obvious benefit of not having a magazine to lose, loading followed the same principal that was taught when reloading the standard Army rifle, which streamlined training. 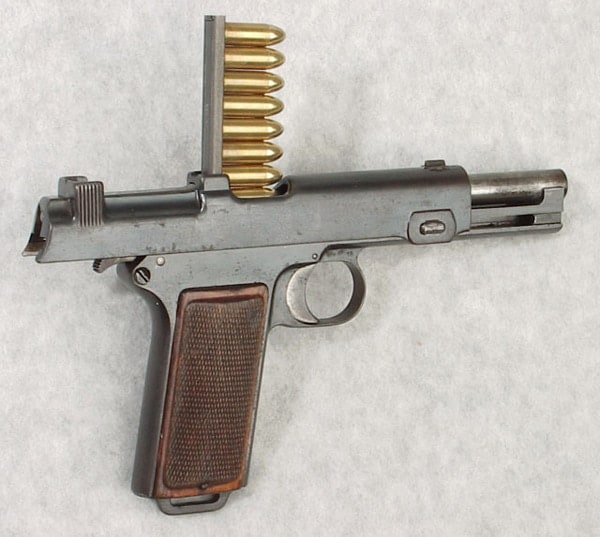 Instead of the striker-fired, locked-breech action of his earlier 1907 design, Krnka and company used a more conventional external hammer. This led to many calling the 1912 the ‘Steyr-Hahn’, with ‘Hahn’ meaning Hammer in German, to differentiate the two designs. The 1912 used a rotating bolt, similar to the Beretta PX4 of today, that cammed over a 20-degree revolution to eject and chamber rounds. This made the pistol remarkably reliable.

Meant to replace large-bore Gasser revolvers, the BFRs of the 19th century, the new Steyr needed to bring a brute of a bullet with it. For this, it was chambered in the hard-hitting 9×23mm Steyr caliber. Similar in size to the 9mm Largo and the .38 ACP, it shot a 115-grain bullet out past a respectable 1200fps. This translates into about 400 ft/lbs of energy.

With a large milled steel frame, and very few moving parts, the big Steyr was a durable brute. Due to this beefy construction, it tipped the scales at almost 42-ounces, unloaded. It had a 5-inch barrel, which contributed to an overall length of 8.5-inches. Ergonomically, this produced a very distinctive feel and look; the 1912 Steyr rather looks like the design Picasso would create if tasked to sketch a 1911 Colt. The fact that the takedown for fieldstripping is located at the end of the slide near the muzzle further confuses the design.

By 1914, the new Steyr pistol was in service with the Austrian Army just in time for World War 1. Compared to the other European pistols of the Great War, with the possible exception of the British .455 Webley, the 1912 was the most formidable opponent. It soon proved superior in the harsh mountain and trench fighting against the Russians, Serbs, and Italians. It proved so popular that many more Steyr 1912s were ordered than the ‘standard’ pistol, the 1907 Roth-Steyr.

Austrian Stormtroopers, 1918. The soldier on the far left sports a Steyr M1912.

The Germans liked them so much that the Bavarian Army bought 16,000 during World War 1 and in 1938 you could say that Hitler liked Steyr so much that he bought the company—or rather he annexed the country. After this, some 60,000 old 1912s were rechambered in the puny German 9mm Luger caliber for use by the military. They saw much service in a Second World War

More than 300,000 of these pistols were made 1912-19 in several variants and they were sold to governments on both sides of the line as well as on the civilian market. If you want an oddball pistol with lots of history that’s unlike anything you have ever owned before, they usually go for bargain prices. Nice civilian guns can bring $250-$350 today and are highly sought after. Besides WWI-era Bavaria and Austria, there were models sold to Rumania and Chile. Most will have Austrian markings, which include a ‘W-n (eagle) xx’ with the xx being the year of manufacture. In almost all cases, you will find these guns still with national markings and in some instances, markings from two to three countries as the gun changed ownership overtime. It is not uncommon to find Austrian eagles, Czech lions, and Nazi proofs all on the same pistol. These guns tell a story when you find them. 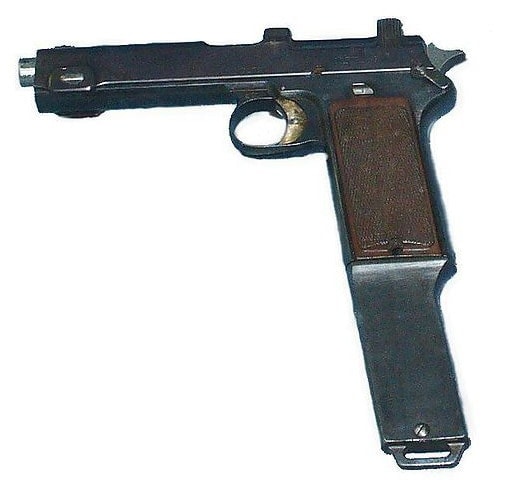 A full-auto machine-pistol sub variant, the M1916, with an extended 16-shot fixed magazine and optional buttstock, is the rarest as only a few hundred were made, and today there are seen mainly in museums. Other than these rare gems, the Nazi-marked (Nazi Waffenamt eagle on trigger guard) 9x19mm conversions tend to bring the most money with collectors. These guns go for $1000+. The fact that very little good looking 9x23mm Steyr ammo is in circulation today makes the German WWII era conversions also one of the only variants still affordably shootable.

The Austrian Army kept the Steyr 1912 until the end of World War 2. After 1955, when the Army reformed, the country used surplus Browning Hi-powers provided by the West before switching back to a new model Steyr, the redesigned and Walther licensed P-1 in 1958. By 1982, the country replaced the Steyr pistol legacy with that of a new one when they were the first country to adopt the Glock 17.

But that’s another story