Legendary Marine Colonel John Dean “Jeff” Cooper was possibly one of the greatest ambassadors of the arts of combat shooting. The Colonel was and remains among the most influential thinkers on modern tactical shooting yet his greatest foray into the handgun market was the ill-fated Bren Ten.

What Col Cooper wanted in a handgun

Though he often taught pistol with 1911s, Cooper was a fan of the Czech designed CZ-75, a 1970s double stack 9mm with great ergonomics. The Colonel liked everything there was about the CZ, except its caliber, deeming it too low-powered.  After reading an article Cooper wrote about the CZ and its perceived limitations, two like-minded gunmakers, Tom Dornaus and Mike Dixon, reworked the basically public domain design, stretching it out to a 10-shot doublestack magazine holding .45 ACP. 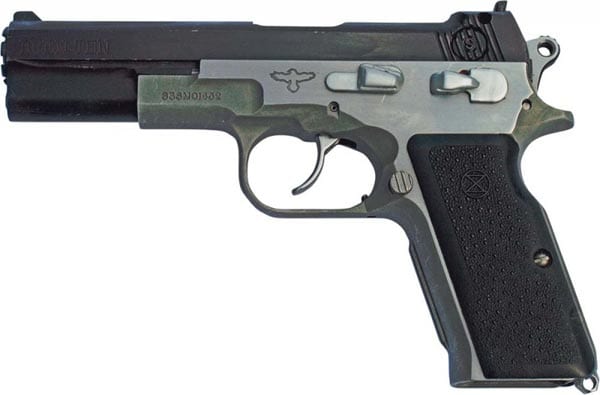 Bren Ten in 10mm. note the Cooper Raven on the frame.

This gun in hand, they went to talk to the Colonel. 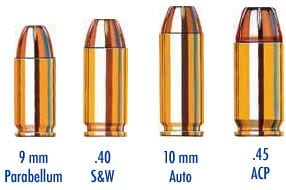 Comparison of pistol rounds including 10mm.

the D&D guys called the CSP-80 (Combat Service Pistol of 1980). This early gun used a short recoil operated, locked breech semi-automatic pistol with a Browning Hi-Power style linkless system. Cooper suggested they change the caliber from .45 ACP to a new (and very hot) .40 cal. round and even offered the use of his signature raven image to grace the gun’s frame. The .40 Special morphed into the 10mm Auto once Norma in Sweden got a hold of the design, while the CSP-80 designation was changed to Bren (after Brno the town that the CZ plant is in).  The Bren Ten was christened with the ‘Ten’ alluding to both the caliber and magazine capacity. 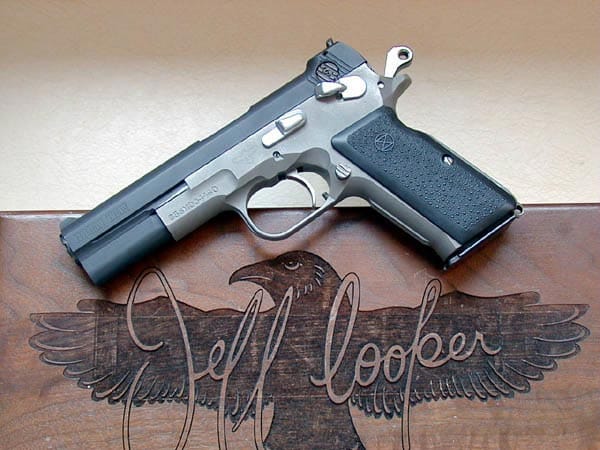 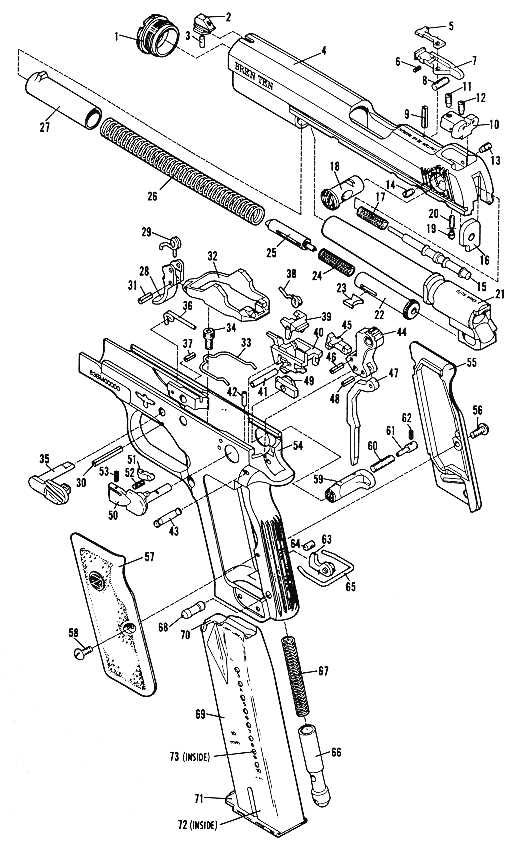 The final design incorporated a single-action/double action capability with the ability to be carried either cocked and locked (like the 1911) or with the hammer down. The gun had a huge tactile loaded chamber indicator down the right hand side of the slide, a firing pin safety, and a thumb safety. Aggressive front and rear grooves and the pebbled grips gave the large framed handgun a good level of control. The Bren Ten used so-called Power-Seal rifling which advertised better accuracy at long range. This, coupled with the spicy 10mm round made the pistol fully capable of taking game or winning combat engagements out to 50-yards and beyond.

It was very rugged with an all-carbon steel frame and slide; just plain old 1980s sexy. This also meant the gun was quite heavy, at 38-ounces with its 5-inch barrel and 8.75-inch overall length. By 1982, the gun was being rushed into low-rate production by the newly formed Dornaus & Dixon Enterprises, Inc., and soon appeared in the hands of fictional Miami Vice detective Sonny Crockett. But we are getting ahead of ourselves. 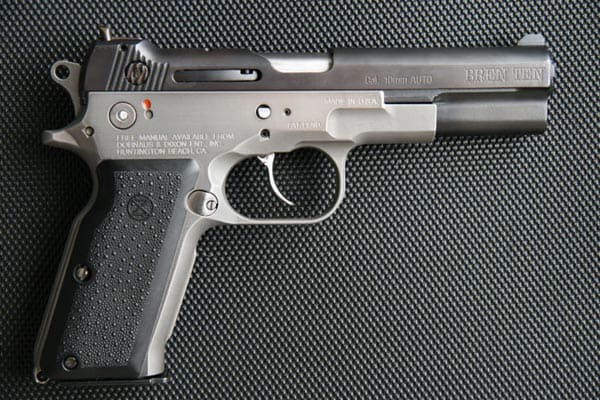 When we said ‘rushed into production’ we weren’t kidding: the Bren Ten went from the drawing board to the field in just under three years. Unfortunately, this made the first customers essentially beta testers and when minor problems came up with the gun’s handling, warranty issues threw a wrench in the assembly line. Some early Brens even shipped without magazines, as supplies that worked (the original Mec Gar mags did not) were low. While this wouldn’t have hurt a large company like S&W or Ruger, it was disastrous to a new gunmaker with a single product line.

Shooting the Bren 10 with the original load was a beast, compared by many to ripping a .44 Auto Mag.  Even with today’s underpowered loads it has stout recoil due to the high bore axis incorporated into the design. There are a number of Brens floating around that have suffered slide failures or even frame fatigue after firing a good bit of the old ‘single malt’ 10 mil ammo.  Rare but significant problems like these further contributed to the gun’s demise. The ammo itself never caught on in its full power loadings and almost died out in the 1990s had it not been for the Colt Delta Elite and the S&W 1006. 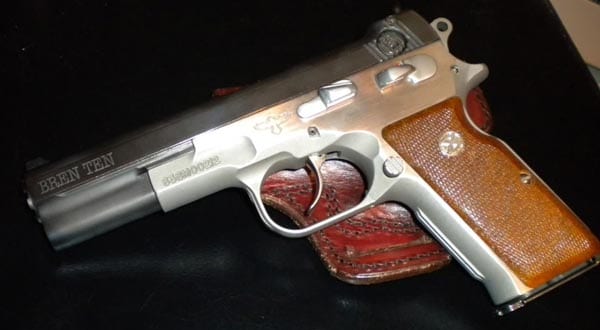 Even two tones couldn’t save the Bren Ten.

Despite all of these fatal flaws, the gun was still a good, strong attempt at being perfect and much like the legend of Icarus, the boy who learned to fly but got too close to the sun, the Bren 10 was something of an over-reach. In an attempt to expand, the company tried to introduce variants such as an all-black “Special Forces Model” as well as a chromed slide model (similar to the one carried in Miami Vice), but it was just adding lead to the balloon.

Construction costs of such a strong firearm, coupled with the limited operating capital of a small business, compounded by warranty work on early guns proved too much for the company and Dornaus & Dixon shut their doors in 1986. Cooper himself even admitted the pistol was “not entirely sound” in 2004.

Today the 10mm auto pistol is still around with the Glock Model 20, Colt Delta’s and legacy S&W Model 1006’s being readily available for much cheaper than the D&D special. Vltor teased the market for years with bringing a redesigned Bren Ten back as the ‘Fortis’—but no guns ever showed up. 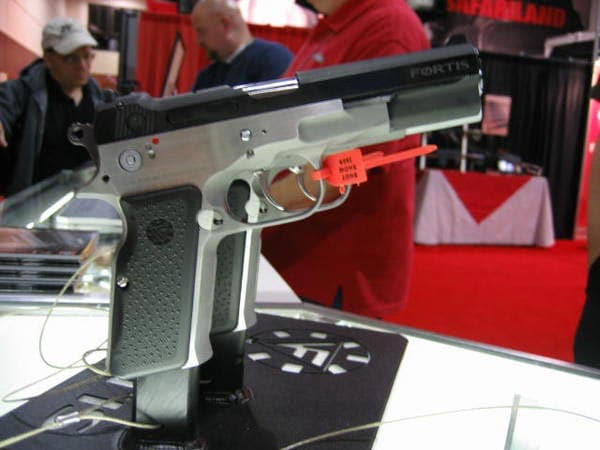 The never released Vltor ‘Fortis’, a redesign of the Bren Ten.

In the 1990s, Tanfoglio of Italy, known for their EAA Witness series of CZ-75 clones in 9mm and 45ACP, brought out a 10mm Auto version. This gun was many of the things the Bren Ten tried to be but wasn’t, yet 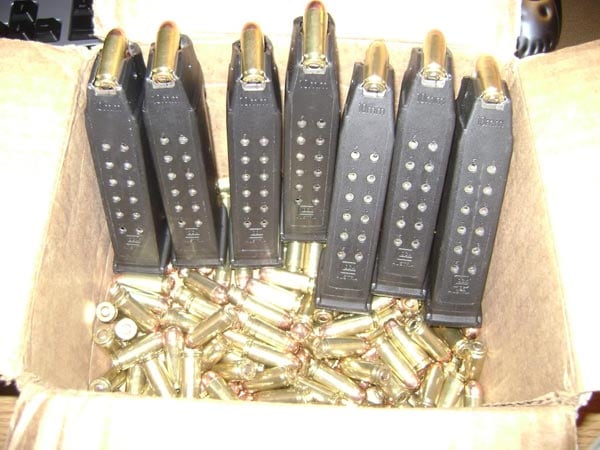 still suffered from cracked slides if shot often with hot ammo. However, these spaghetti 10-millys can be found for around the $400 mark—which may leave some change to put towards the rare ammo.

Speaking of which, current 10mm Auto that is on the market from PMC, Hornady, Federal, CCI and others is loaded much lighter than the old school stuff the Bren Ten was made for and as such is often snidely called “-P” because of this fact. Even this compromise ammo is expensive, with current Gunbot quotes all going well over $1 per round. 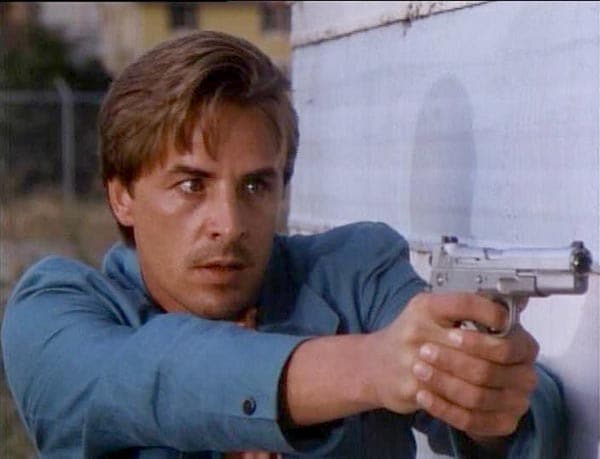 Genuine Dorius and Dixon B10s in good condition, especially with the correct plain white craft paper box with the manual, are crazy rare. Just under 1500 of them left the factory before and collectors have snatched most up. The early Miami Vice tie-in has also ensured that a generation that grew up watching Crockett and Tubbs will keep an interest in these rare hoglegs.

The Standard Model is the most common of these rare guns with the slightly shorter (4-inch barrel) Special Forces guns bringing higher prices. When we say higher prices, we mean don’t expect to get a real D&D Inc. Bren Ten Standard for less than $2K.