The ASP 9: The coolest custom gun you weren't suppose to hear about 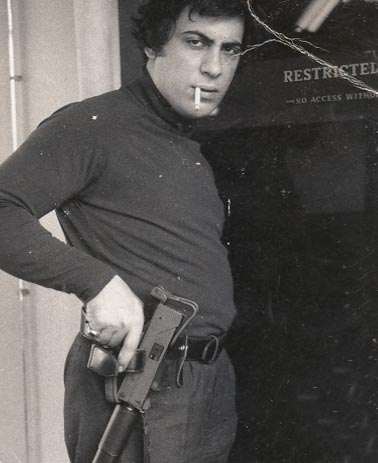 If you’re under the impression that the current generation of shooters ‘practically invented’ super modified combat carry guns, it might come as a shock to stumble across something like the 1960s ASP 9 and realize this trend is just a case of just building a better mousetrap.

Never heard of the ASP 9? Well friends, this story begins with one Mr. Paris Theodore of Seventrees Ltd, and the year was 1966.

Who was this man?

Paris Theodore was the product of New York in the 1950s. The son of a vaudeville dancer and an art professor, he grew up on and off Broadway. After disappearing and allegedly working for shadowy government agencies for a few years, in 1966 at the age of 23, he started Seventrees Ltd, which specialized in custom and semi-custom holsters.

From his shop on West 39th Street in New York, he made several radical departures from the standards of the time, filing more than a dozen patents on new concepts. His work used hand boning to fit the exact pistol, for the express purpose of reducing wear and simultaneously retaining the pistol. He also pushed for muzzles that extended beyond the holster; and molded front sight protection, industry standards in many cases today. Nevertheless, he was much more than a holstersmith. 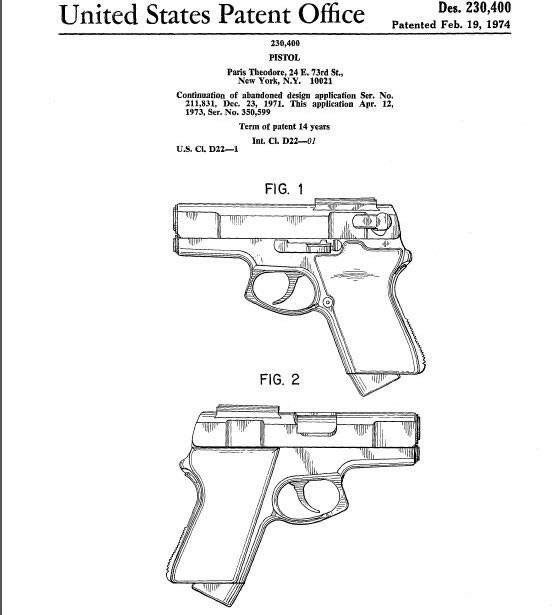 Behind a safe in his holster shop, Theodore also made clandestine firearms for a number of government agencies. These included 22 pen guns, cigarette lighter guns, a clipboard for the FBI that could fire live rounds, and briefcase guns. In his spare time, he invented the Quell shooting system, a reactive point-shooting technique that concentrated on central nervous system shots using muscle memory.

In the late 1960s, he was approached by those unknown and asked to make a very special gun. One that could be used overseas where 9mm was readily available. A gun that could be carried concealed but when put into service could win a gunfight. This gun became known as the ASP 9. At the time, one of the most popular up and coming semi-auto handguns on the U.S. market (that wasn’t a .22 LR or .45 ACP) was the Smith & Wesson Model 39. This single-stack, double-action 9mm was produced by S&W from 1955 and had an anodized aluminum frame, a blued carbon steel slide, and walnut grips. Using this weapon as a starting point, Theodore made 200+ changes to the gun. 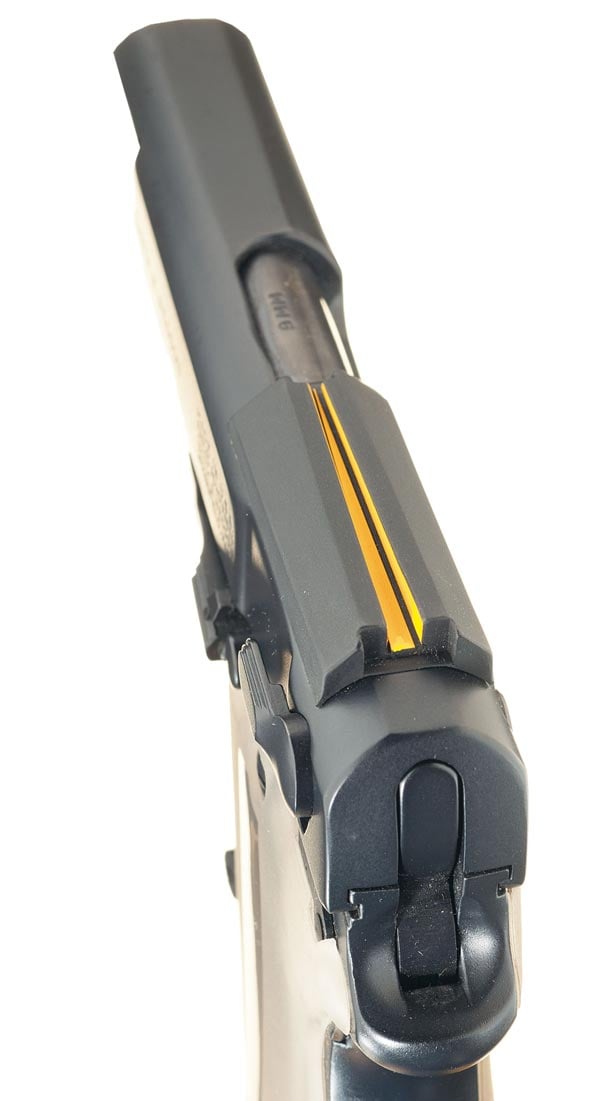 ASP 9 Guttersnipe replaced both the from and rear sights.

First, he lightened the already light 7.3-inch long, 28-ounce frame, and slide as much as possible, shortening the slide in the process. He removed the sights and added his own special ‘guttersnipe’ sight that ran most of the length of the slide.

To be able to tell how many rounds were left in the gun without ejecting the magazine, he replaced the elegant checkered walnut grips with simple clear plastic GE Lexan panels through which the user could look into a cut-away window in the magazine and see how much brass was left in the fuel tank. On the magazines themselves, a curved baseplate was added for an extended grip.

Beating today’s manufacturers by decades, he ‘melted’ all of the surfaces making every sharp edge blend smoothly so that the gun was virtually snag free. A bobbed hammer spur and reduced slide stops and safety levers complemented this. He added a forefinger hook to the trigger guard and cut away another part of the guard to aid in better grip alignment and faster trigger time. To keep the coating simple and rugged in the days before Duracoat and Cerakote, Theodore covered the gun inside and out with a Teflon-S, which also had self-lubricating properties.  The final product was 6.7-inches long, weighed in at just 21-ounces, was a dream to conceal, could acquire a target rapidly out of the pocket, and had a 6-pound DA trigger pull to get those quick shots off. 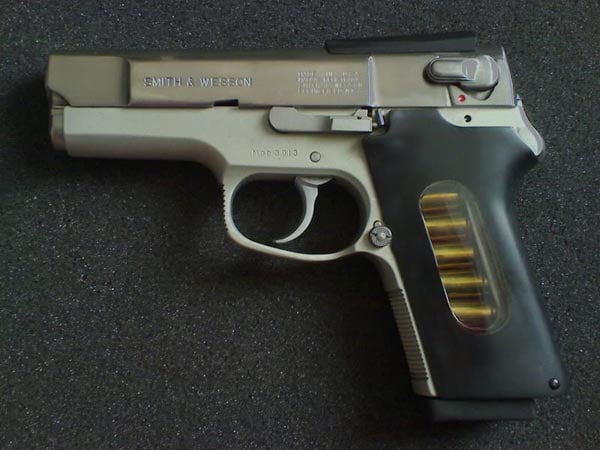 More a ground-up re-manufacture than a simple conversion the “procedure” cost $299 in the 1970s (to a gun you had to already own). 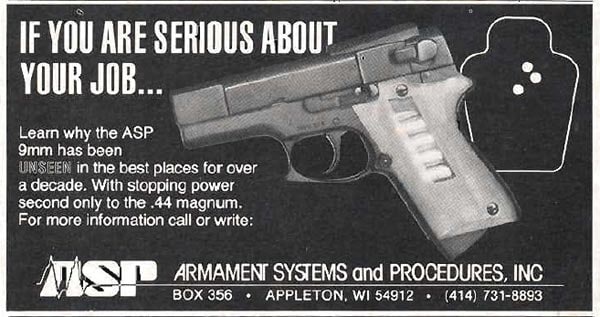 Theodore converted an unknown number of M39’s over to his new firearm from 1968 onwards. He patented the design itself (#230400) in 1971. After 1982, he stopped building them himself and licensed it to Kevin Parsons of Armament Systems and Procedures of Appleton, Wisconsin, for a more extensive build.

Billed as the gun that is ‘unseen in the best places’, ASP made/converted about 3000 or so of the gun with less quality control than Theodore for $760 gun included. Nevertheless, it proved popular with people on all sides of the shooting world (among the few that knew about it). Others tried to copy it over the years, especially after Theodore stopped working on firearms after 1987 and his patent on the design expired the next year.

Ken Null, another famous holster maker, took over the ‘unseen’ motto, Theodore’s designs, and a lot of the ASP9 legacy, which continues to this day. 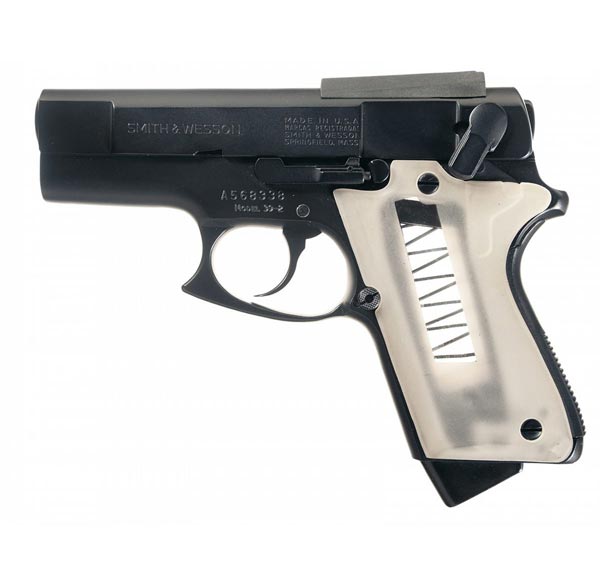 Even James Bond 007 carried an ASP 9 in several of the novels written by John Gardner in the 1970s and 80s before going back to the Walther after the Regan era. James Bond expert James McMahon would later write: “If Bond were a gun, he’d be the ASP. Dark, deadly, perfectly suited to his mission.” This is appropriate as many gun writers equate Paris Theodore to the Q scientists in the James Bond series.

Right hand side view of ASP 9 made by ASP. Note the difference in the trigger guard and the snake logo on the grip.

Very few Paris Theodore originals and even fewer genuine ASP 9 handguns were ever made. Probably far less than a thousand including very good fakes are in circulation. This gun however has a loyal following and correct ASP9s can easily go for over $3,000 with nice examples going twice as much. On the flip side, 60 percent examples of these converted guns that are still in working condition appraise at around $600ish. 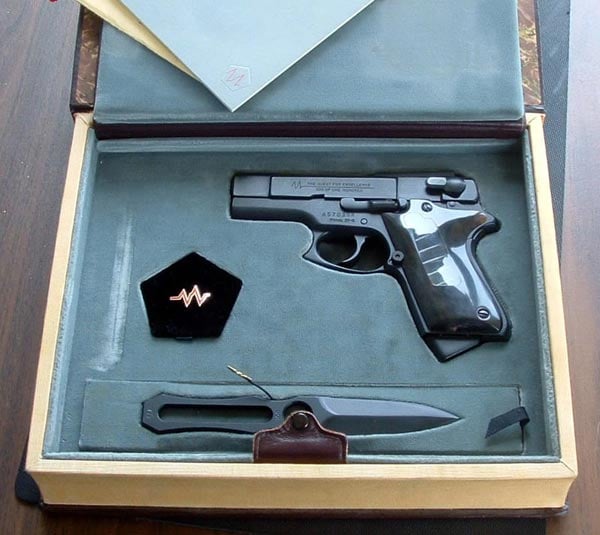 ASP-produced guns will have a jagged snake that resembles the heart monitor cardiac flat line and be plainly marked ‘ASP Appleton WI’ while Paris’s handmade guns will have very little if any markings. Among ASP’s 3000 guns are a special 100 that were of the “Quest for Excellence” series with buffalo horn grips that were sold with a CIA letter opener/dagger, ASP patch, and hollowed-out book case that can go for $3500+ in 100 percent condition.

Today the ASP Company sticks to batons and handcuffs and Theodore’s shop has long since been shuttered, the former shadowy figure with the tactical turtleneck himself went to that great secret gun shop in the sky in 2006. 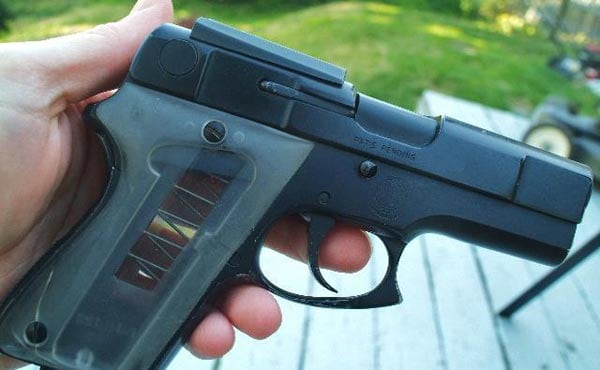 Rare shot of an ASP 9 in the daylight. 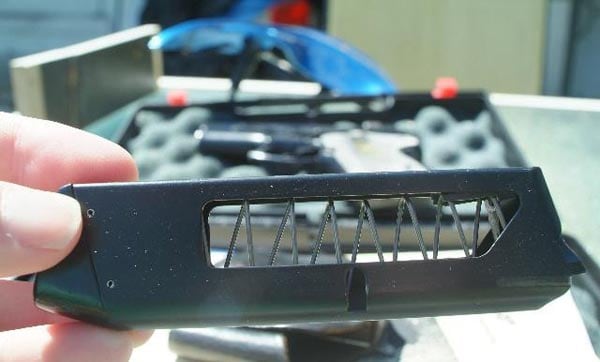 ASP magazine. Note the curved baseplate and the cut away. These magazines can bring in $200 on their own.

The ‘ASP 9 build’ is fairly easy to pull off (at least parts of it) and is often seen on small frame S&W 9mm pistols. Charles Kelsey of Devel made several conversions both of the Smith M39 and its big brother the M59 that are very similar to the ASP9 concept, but go a few steps further. One company, ASP2000 (no relation to the original) makes a version today based on the S&W 3913/3914/3953 series, themselves Smith’s own more mainstream take on the ASP, that is fairly close to Theodore’s original.

Overall, many of Paris Theodore’s ideas are still around even though he and his guns have faded from the public’s mind. Just look at the subcompact pistols of today and judge for yourself.