Using a mash up of technology garnered from WWII, the US military selected a compromise general-purpose machine gun in 1957 that remains in limited service to this day.  This gun, officially known as the M60, has been carried my many, loved by most, and hated by some. No matter which one of these categories a soldier fell into though, they all called it ‘the pig’. 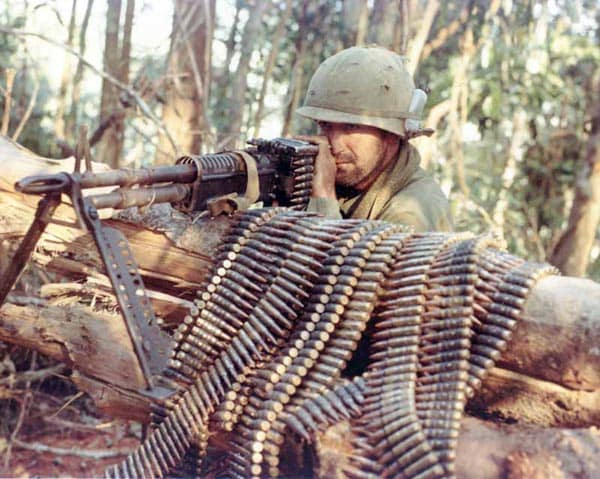 A ‘Pig’ gunner reader for just about anything.

In the late 1950s, the US Army was in the process of converting their arsenal from the tried and true .30-06 round (that had gotten it through both World Wars and Korea) to the shorter and more controllable 7.62x51mm NATO cartridge. The first step?  Replace its WWII era small-arms with more modern equipment to shoot this new round. The vaunted M1 Garand and M1 Carbine were to be replaced by the M14 battle rifle. Then there was the 19-pound Browning M1918 BAR, a myriad of submachine guns, and the 31-pound M1919 Browning Light Machine gun that needed a replacement. The 1950s replacement for all of them was to be the M60. 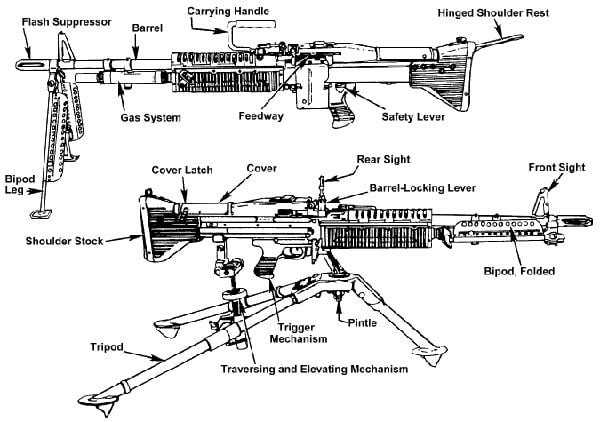 M60 diagram with tripod and bipod.

After WWII, the US military took careful stock of captured German and Japanese weapons systems. From the bad ones they learned what not to do. From the good ones they learned what to copy. From the German FG42 light machine gun, they copied the overall layout, bolt, and gas piston system (which in itself was ironically an improvement of the WWI era US Lewis gun). From the MG42 (which was known as Hitler’s buzzsaw due to the high rate of fire) they borrowed the top cover and belt feed unit. When these features were put together in a full auto only, gas-operated, air-cooled, belt-fed, automatic machine gun that fired from the open-bolt position and chambered in 7.62x51mm NATO, it was at first called the T161E3.

It had a cyclic rate of 550 rounds per minute, similar to the M1919 it was replacing. Using disintegrating link ammunition, the typical gunner would fire six to nine round bursts with four to five seconds between 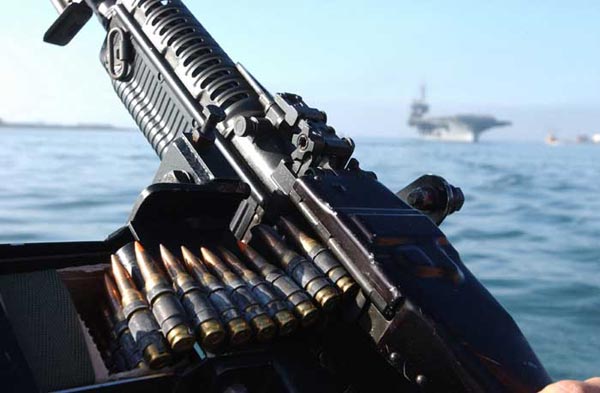 bursts, which used up about 100-rounds per minute. To keep up the rate of fire the barrel was designed to be changed out once it got too hot and a fixed head space in the gun’s chamber meant that this could be done rapidly. When firing fully cyclic, the 22-inch barrel had to be swapped out every minute.

Overall length of the unloaded gun with bipod and carrying handle was 43.5 inches and it weighed in at 23.15-pounds, striking a balance larger than the BAR yet still smaller than the M1919. The 15-pound M122 tripod could be fitted to the gun for use in a sustained fire role, like in defense of an isolated outpost.

After a decade long T&D period, the gun was finally adopted and type classified as the M60. 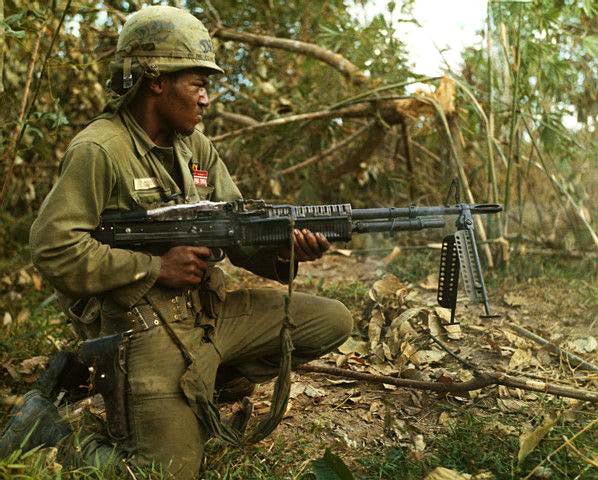 Selected by the military in 1957, the M60 was used as the broom to sweep the older M1919 machine guns, M2 and M3 carbines, and even the few remaining Thompson subguns out the door. While some of these guns lived on in secondary roles for a while longer, the M60 was indisputable the new king of the castle. The firsts units that received the gun were Cold warriors holding the line against 50,000 Soviet tanks in Europe but soon enough the weapons were being used in a real live shooting war in a place called Vietnam.

It was in this South East Asian conflict that the M60 did yeomen service. Despite a lot of teething problems (see below), the gun 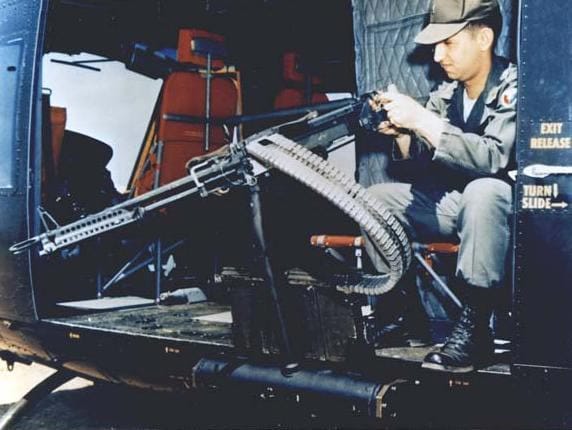 M60 door mounted on a Huey. Note the ammo chute.

was used by all branches of the US military in that war. It was used in base defense roles against attack, as flying fire support in the doors of transport helicopters, mounted on vehicles and small boats using spade grips, and, most commonly, toted by gunners assigned to infantry squads.

These soldiers had to hump everything they carried through a tropical rain forest under some of the worst conditions imaginable, earning it the 24-pound M60 the nickname ‘the pig’—but this wasn’t the only reason for the moniker. Combat squad, where most soldiers carried 5.56mm M16s, noticed quickly that the 7.62mm NATO full-auto-only M60 could huff and puffed and blow down houses. 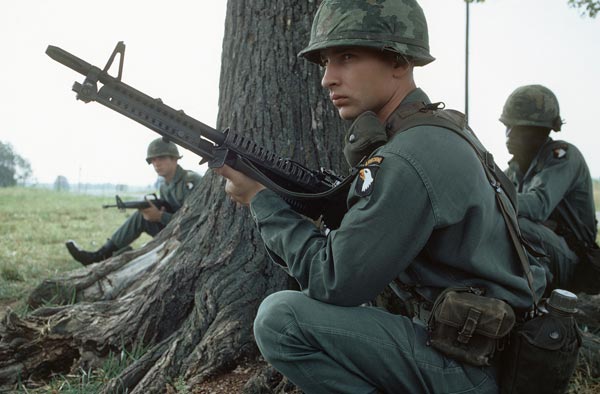 Early problems with ‘the pig’ 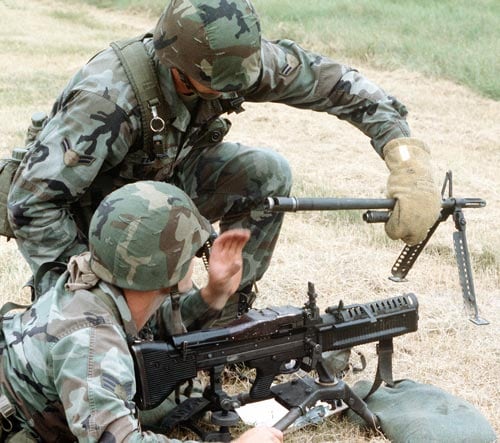 For a gun that had such a long development period and was based on such a good design, the M60 had a few, unexpected, even embarrassing problems. The gun had no carry handle on the barrel to remove it with, so gunners were given an asbestos oven mitt to grab the red-hot steel when it needed to be changed out.  The thing is, barrel changes were probably only needed in a hot firefight and, in combat, the reality of soldiers “getting their mittens on” didn’t work out real well.

Also, the fire-control assembly was held to the gun with a single spring.  If knocked on brush or gear, it could result in the entire trigger group falling out, which did not make it very popular with troops.  Worse, the nut that held the gas system to the weapon would back out and fall off in extended firing, which had to be fixed in the field by the use of a—wire hanger. This fix further slowed down barrel changes as each fresh barrel had its own gas system that had to be installed at the same time. 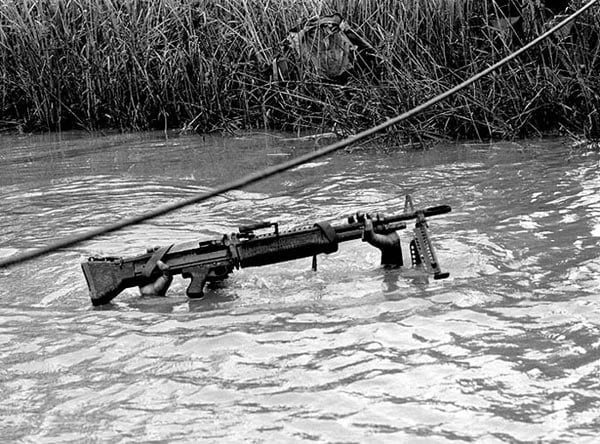 the 22-pound M60, kept high and almost dry in Vietnam. 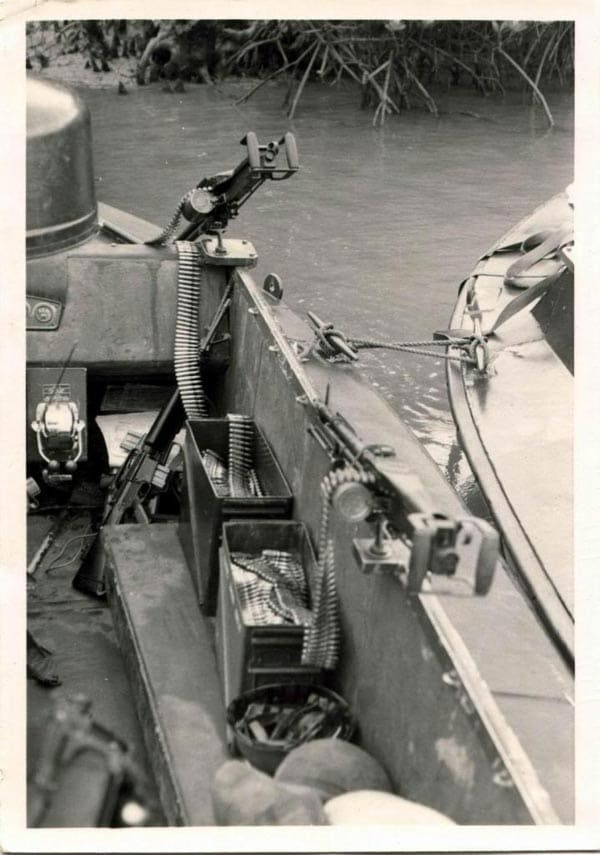 Spade drip M60s on Riverine boat in Vietnam. Check out the C-ration cans wired to the left side of the gun to aid in ammo feeding.

The receiver is not one piece, but rather several light metal pieces welded together and attached to a trunnion. After several thousand rounds, these guns were just worn completely out and the receivers would literally stretch to the point of being unserviceable.

One of the most common field upgrades to the M60 was the C-rat can. To eliminate the need of an assistant gunner whose primary job in combat was to keep the belts of ammunition coming, M60 users would wire a C-ration can to the left side of their gun just below the feedway so that the belts didn’t bind up and jam the works.

These problems led to a number of eventual…

In 1986, the M60E3 was born which, using lessons learned from Vietnam, made a more streamlined gun. This lighter package dropped the weight down from 23 to 18.7-pounds and a vertical forward grip allowed the new gun to be fired from a standing position. The bipod was moved from the barrel to the forearm and a carrying handle was added to the barrel to aide in quick changing. This gun was put into service gradually but the writing was already on the wall. 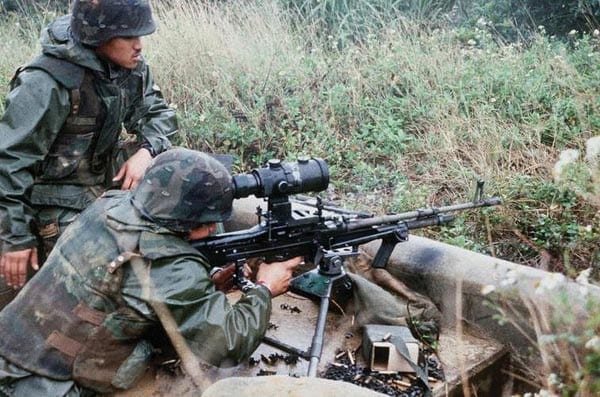 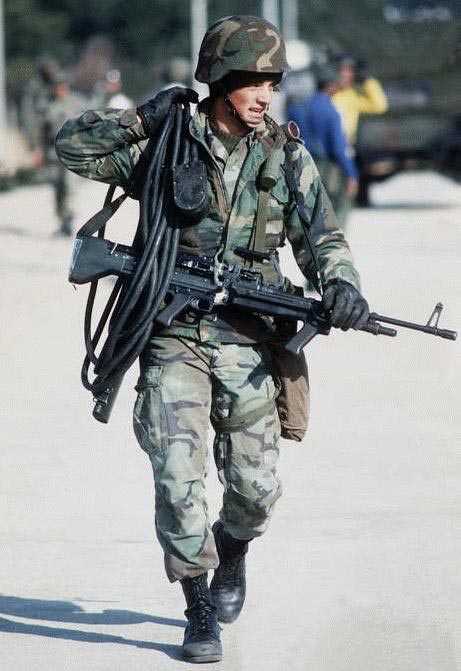 M60E3. You can tell by the vertical foregrip and the thinner barrel profile.

By the 1990s, the Belgian FN MAG 58, now type classified as the M240, was phasing out the improved M60E3 and the Navy’s Mk 43 (M60E4). Even though the early M240 models tipped the scales at 27-pounds, they were utterly reliable in tests and required no C-ration cans, coat hangers, or asbestos gloves. A few M60s saw service into Iraq and Afghanistan and continue to haunt armories in spec ops units today, but, without an official notice, the pig has been put to pasture by the US military. It is still encountered regularly overseas with US allies and this will most likely continue for decades.

The M60 was legendary in film and TV over the past half century. This has made it probably one of the most recognizable belt-fed machine guns in modern history.  Heck, the final season of Breaking Bad seems to revolve around an M60 machine gun in Walter White’s trunk.

M60D had spade grips for pintel mounting on ships, vehicles and aircraft. 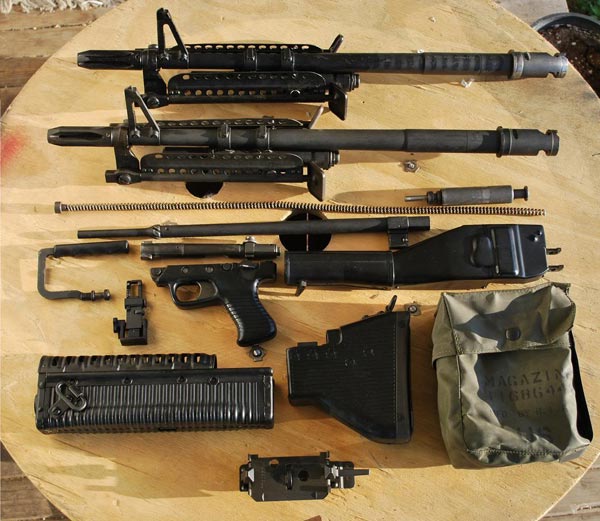 There are quite a few of these guns floating around out there as Class III weapons, starting at about the $30,000 range, which is comparatively low for belt-fed guns in this country. A few firms such as Desert Ordnance have been making and selling semi-auto belt-fed M60’s for generations, but these often run over $10K. Then of course there are dummy guns made from torched receivers for about $1000.  You can also get your own parts kits and take it from there depending on your skills.

If all else fails, one of the most powerful places to see a M60 up close is at the Vietnam veterans Memorial in Washington DC. The bronze statute on the National Mall by Frederick Hart shows three servicemen of the period. 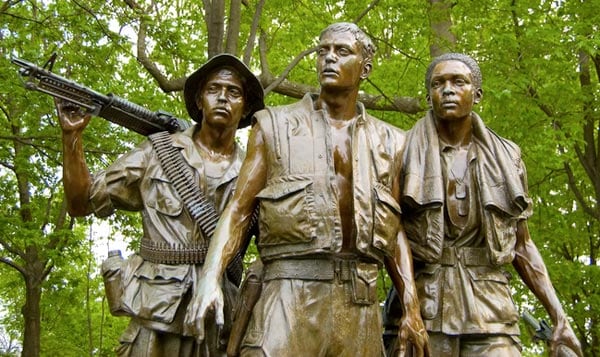 The one on the left is toting ‘the pig’.