The MAT-49: The best gun France ever made? (VIDEO)

The words “great French weapons” are not often seen in the same sentence. Haunted by the adoption of several dated and troubled designs such as the disastrous Chauchat light machine gun, the pipsqueak M1892 revolver and the ‘also-ran’ MAS-49/56 battle rifle, the French military is not renowned for their modern small arms. The MAT-49 subgun, however, is something of the exception to the rule. 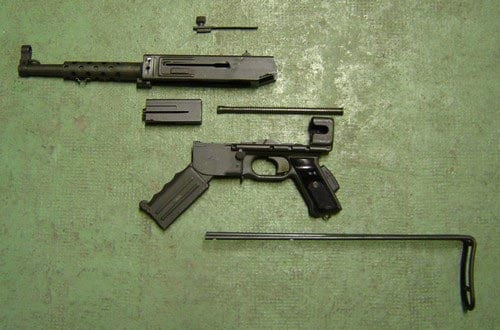 After World War 2 the French military, devastated and largely disarmed by the German occupation of 1940-44, had to be remade from scratch. One of the most widely spread weapons of the previous war was the submachine gun and France needed them badly. The French national arms concern Manufacture Nationale d’Armes de Tulle, better known as MAT, started working on the design. Adopted in 1949, the designation became the MAT-49 for obvious reasons.

And it wasn’t half-bad. 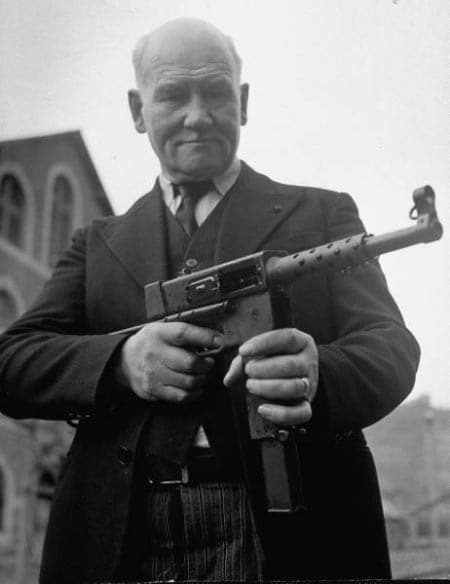 Pierre Monteil, inventor of the MAT-49 with marginal trigger discipline.

Firearms engineer Pierre Monteil constructed a gun whose byword was: simple. Made from a thick stamping of sheet steel, it had few components to break. Its action was a rudimentary blowback type, which eliminated an extractor. A heavy mainspring, a 7.7-pound empty weight, and a 1.3-pound bolt made the gun easy to control and its relatively slow 600-round per minute cyclic rate made 3-4 round bursts into a man-sized target quick to master. With the sub gun’s 9mm Parabellum ammo, it was equipped with flip-up, L-shaped rear peep sights graduated to 50 meters on one side and 100 on the other. To keep it fed, the gun could carry 20 or 32-round single-stack detachable box magazines.

The whole gun could be made compact for use by paratroopers and vehicle mounted infantry through the use of a collapsible wire-frame buttstock and a magazine well that could be rotated forward similar to the Hotchkiss Universal. Overall length with a 9.1-inch barrel was 28-inches with the stock extended and just 18 when it was collapsed. A grip safety kept the open-bolt design safe for the end-user in the field.

Over its course of production, it was made in four slightly different variants that are easily identified by their grips. The first model has wooden grips, the second has Bakelite grips, the third has a simplified stamped steel grip, and the fourth model (the MAT-49/54) has a fixed wooden stock and longer barrel for use by police forces. 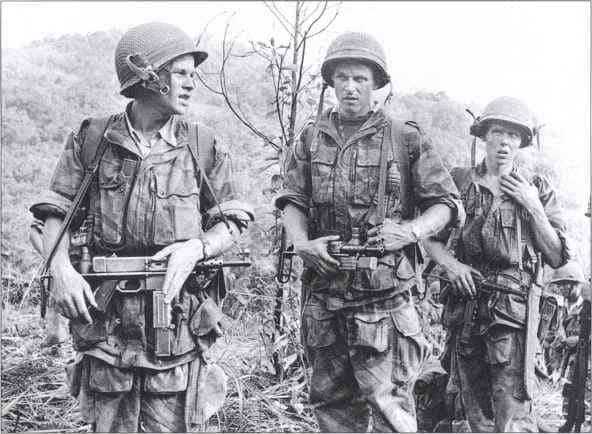 As soon as the MAT-49 was adopted, the French put it to hard service with their UN troops fighting alongside the US in the Korean conflict. Simultaneously, the gun became a favorite of paratroop units dropping to relieve besieged garrisons in French Indochina (today’s Vietnam, Cambodia, and Laos). While in the US we like to joke that French guns are ‘never used and only dropped once’ it should be remembered that the French military fought long and hard in Indochina for almost a decade, suffering over 75,000 combat dead. The reliable MAT is seen as an iconic symbol of that conflict in France. 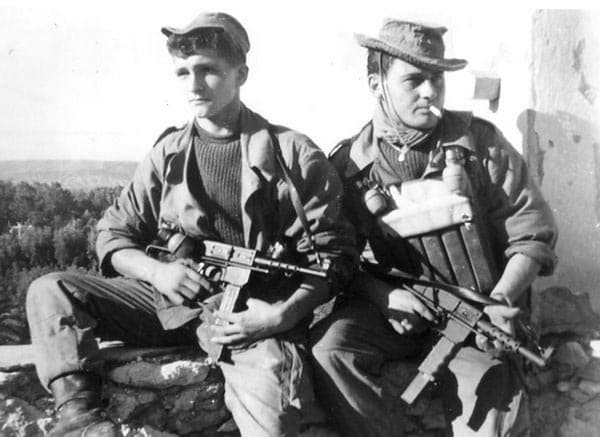 With six spare mags in a chest carrier, a pair of grenades and a MAT-49, the fashionable French commando could travel light.

After the French pulled out of a newly independent Vietnam in 1954 following the disaster at Dien Bien Phu, they left thousands of MAT-49s behind. Many of these guns were used by both sides during the Vietnam conflict (some converted to 7.62x25mm Tokarev by the North Vietnamese) and often encountered by US soldiers during that later war.

The MAT-49 was the iconic gun of the failed French military operations in Indochina and Algeria. 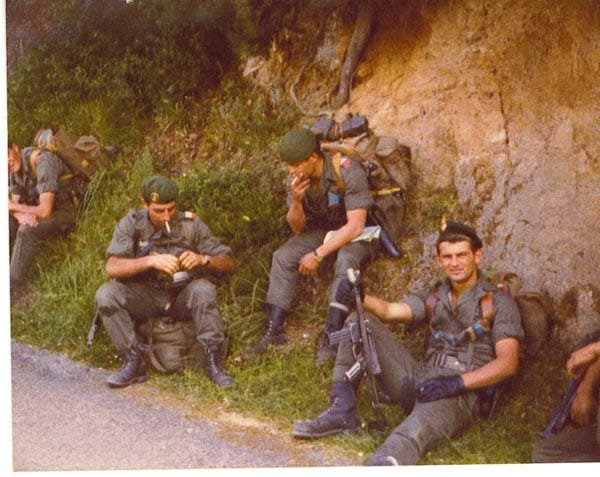 The MAT 49 remained in service into the 1980s as seen here with these foreign legion forces.

From Indochina, the French found themselves in another guerrilla war in Northern Africa that left another 25,000 dead. Fighting in Algeria, the MAT was popular with fast moving commando units in urban counter-insurgency operations. Even long after the French left Algeria in 1962, they continued intervening in the affairs of former colonies on the continent, sometimes with force. This saw the MAT in the hands of rough Foreign Legion characters in Operation Lamantin in 1977 in Mauritania, Operation Kolwezi in 1978 in Zaire, and the Chad-Libyan war of the 1980s.

Although the FAMAS assault rifle, a compact 5.56mm bullpup design, officially replaced the MAT-49 in the early 1980s, the honored subgun was not totally withdrawn from army service until 1998. It’s still found in former French allied armories as well in police hands.

Overall, this homely yet effective piece of hardware got the job done. 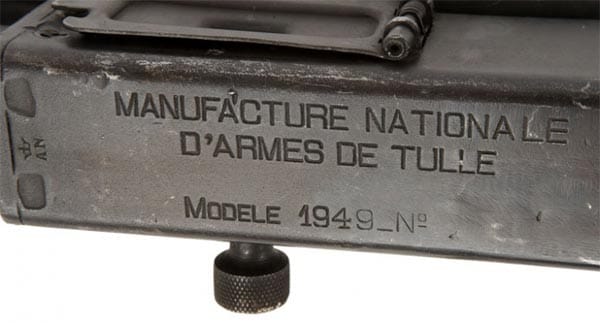 During its 30-year production history, MAT and MAS made more than 700,000 of these so-ugly-its-beautiful subguns. Since all of their production occurred before the 1986 Hughes Amendment cut off new production select-fire weapons from US civilian ownership, these guns were legal to own if registered but less than a hundred were imported into the US. Vietnam vets who crossed paths were also known to bring a few back with them when possible.

Other than that, the only MATs that show up are dewatted guns that have come into the country in the past decade or so. When first imported these kits sold for $175 but the supply has since dried up while several hobbyists have built dummy guns, semi-auto pistols (the original barrel is too short for a rifle) or post-86 rewelds. 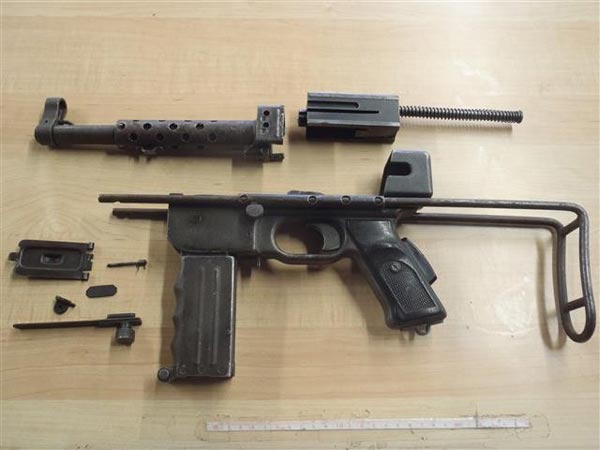 While I can’t see myself reaching for a beret and a tiny cup of coffee, I’d totally take a MAT-49 if they were handing them out.