You've Been Challenged: A Primer on Dueling Pistols (VIDEO)

Honor is a funny thing: today an attribute talked about, but all too rarely upheld. But what is it?  Reputation?  Publish esteem?  A good name? There was a time that honor was a way of life, and had to be protected at all costs, even to the death.  Today an entire subgenre of pistols produced as guardians of this practice remains as a testament to the ‘bad old days’ of dueling.

As early as 712 AD in Germany, so called judicial duels were fought between feuding parties to determine who was right or wrong. If you had a disagreement with your neighbor over where your property line was, you didn’t go to court or call the local surveyor, you grabbed a weapon of your choosing and took it to the town square at noon (so that neither man fought with the sun in their eyes). The last one standing settled the dispute. 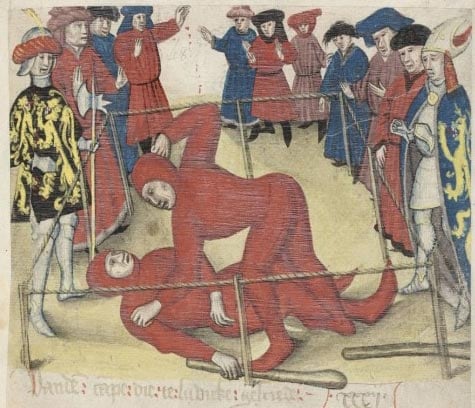 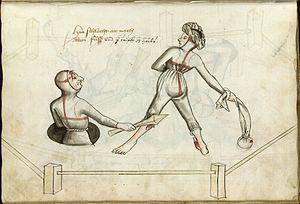 A male/female duel. Note the pit the male combatant fights in and the difference in weapons between the man and woman.

the effect that strict rules became established about proper conduct. For example, commoners fought with farm tools such as clubs and axes, while gentlemen fought with swords. Even men and women could fight it out with the man handicapped—forced to fight with a hand tied behind his back or sunk up to his waist in a pit, while the female was allowed to circle around him. By the 1500s, this type of contest was replaced by jury trials, however trials by combat between two gentlemen for a question of honor, soon to be known as a duel, remained a fixture of Medieval justice. 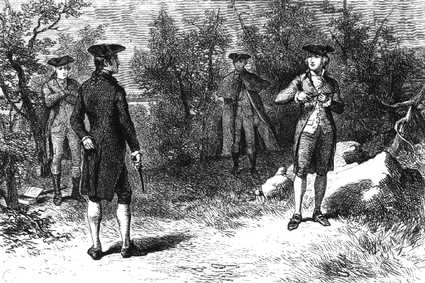 Dueling was always a matter of honor, and “seconds” or attendants to the shooters ensured fair fights.

By the Renaissance, a very ridged and elaborate code concerning the formalities of dueling evolved in Italy. If one gentleman insulted another, even in the most trivial of manners, said insulted gentleman would demand a public apology. To this day, the notion of ‘I beg your pardon’ when making a social goof is thought by some to stem from this practice. Should the apology not be forthcoming, a duel could be offered to satisfy the offendeds’ honor. Each man would choose an assistant, or second, who would negotiate the form of weapons, the time of the event, and where the combat would take place. By the 1600s, the weapons increasingly chosen for these tests of manhood were pistols, mostly because this meant that even the slowest, oldest, or most decrepit gentleman could have a fair duel.

By the time dueling became more of a voguish hobby amongst the nobility than a means of settling common legal disputes, wheellock pistols, the favored weapon of time, were very 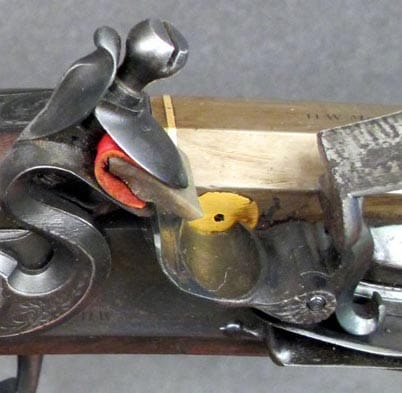 complicated and rare weapons. In some countries, they were even illegal (and they say gun control is a new thing). The advent of the simple and much less expensive flintlock pistol in the 1700s meant that pistols were readily available (and not just for gentlemen), marking an end to the days of the rapier in duels. The problem was, if each man brought his own pistol to the duel, one might be unexpectedly outclassed by the other. Imagine in today’s terms if you had a duel and showed up with a Jennings .25 while your opponent unpacked a Kimber .45. Most ungentlemanly. 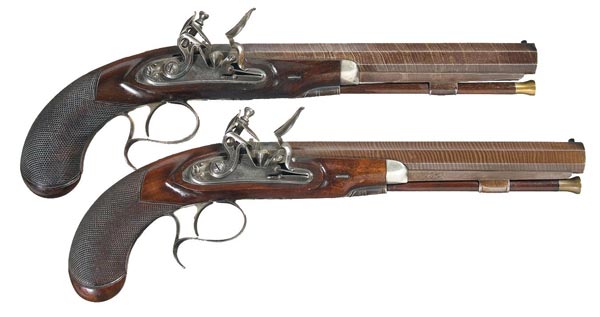 Dueling braces by Brander and Potts of London. 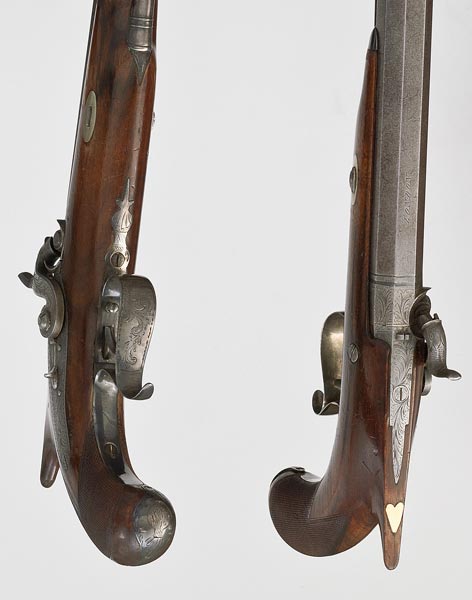 The answer was specially made braces (pairs) of pistols in which each was a mirror image of the other in every way. To make sure everything was fair, the pistols were allowed to be inspected, and each loaded and tested by the other’s seconds for functionality. While these guns of course could be used for other purposes such as self-defense from highwaymen, shooting down ruffians, or surviving revolutions, the main purpose of these pairs of death dealers was in real live shooting duels. These guns were typically highly ornate with Damascus steel barrels, deep scrollwork on both metal and wood surfaces and heavy silver branding and inlays. Often exotic woods like teak and ebony were often used in their creation. 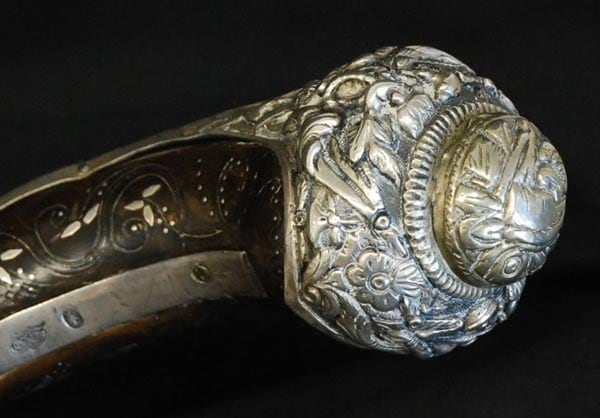 The key to understanding these weapons (and 18th century dueling) is that the guns were made for honor and not accuracy. Almost invariably smoothbore guns of a large caliber, the idea was that if a gentleman needed them for defense, they would be lethal at a very short range but couldn’t hit the broadside of a barn at 20 paces—the customary distance in duels. This was by design: since honor did not require the death of either of the duelists to be satisfied, it was extremely common for the shooters to fire into the ground, the air, or simply to the side of their opponent. Seconds were known to stay well away from the peripherals of the line of fire because of this.

Dueling was amazingly popular in the United States from the country’s birth until about the 1860s. Before taking office, Andrew Jackson is thought to have fought in more than one hundred duels, almost all with pistols, and lived to tell the tale. One book, British Dueling Pistols, by John Atkinson, details that only some 6% of pistol duels ended in fatalities. However, the practice of firing away was not universally accepted. 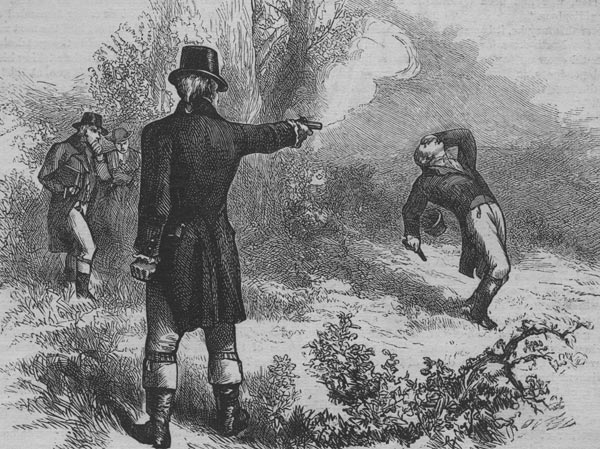 Etching of the famous Burr-Hamilton duel. 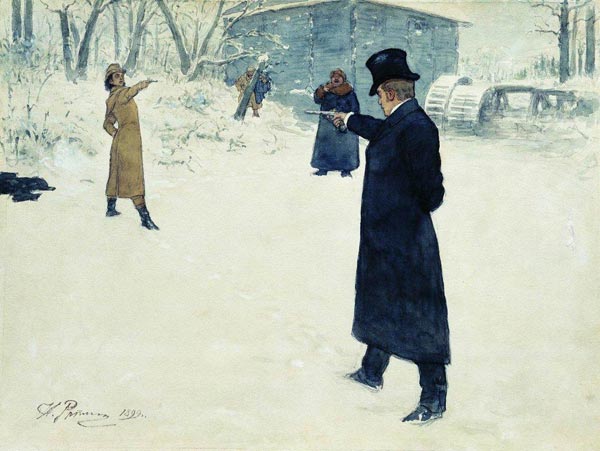 Duel between Onegin and Lenski, 1899.

National anthem composer Francis Scott Key, naval hero Steven Decatur, and the first Secretary of the Treasury Alexander Hamilton all died from pistol shots received in duels. Hamilton, who had fought in 11 previous honor trials, fired first and into the air while then-Vice President Aaron Burr returned fire and mortally wounded the man who now graces the $10 bill. Celebrated Russian author Alexander Pushkin, survivor of 29 previous duels before being killed in his 30th, is another example of how the practice of ‘shooting 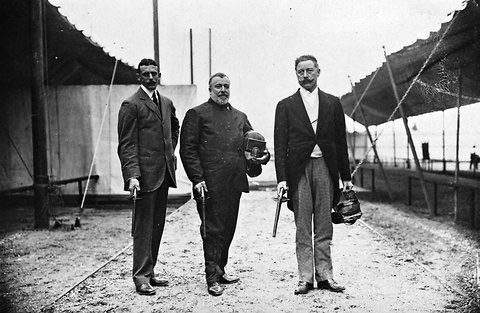 away’ was not universally followed.

By the 1860s, dueling had largely been regulated away but this did not stop it from becoming a sport in the 1906 and 1912 Olympics—with the shooters firing at mannequins dressed in frock coats. In most cases, the ‘high-noon’ gunfights of the Wild West were more Hollywood than the real deal although notable exceptions would have absolutely shattered the gentlemen of the 1700s sensibilities.

Note: The pistols seen in this 1993 commercial are the actual dueling pistols used in Burr/Hamilton duel.  Director of the commercial, Michael Bay, owned them at the time. 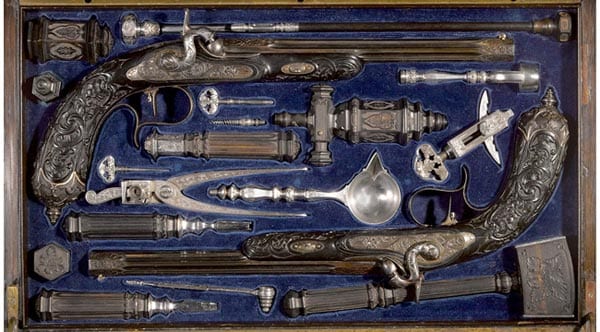 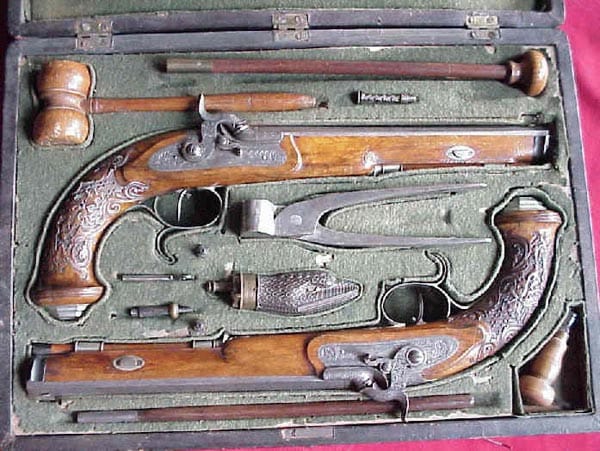 When found, dueling pistols are often still as breathtakingly beautiful and elegant as they were when they were first made. Passed on from family member to family member for generations, these heirlooms were usually kept in pristine condition long after their original owner had departed for the great field of honor in the sky. Well-documented histories only add to their allure for collectors. The supped up 544-caliber English Wogdon pistols that Aaron Burr dusted Alexander Hamilton with in 1804 are said to have had no less than a dozen bodies on them. Incidentally, Hamilton brought them with him, as they belonged to his brother in law. 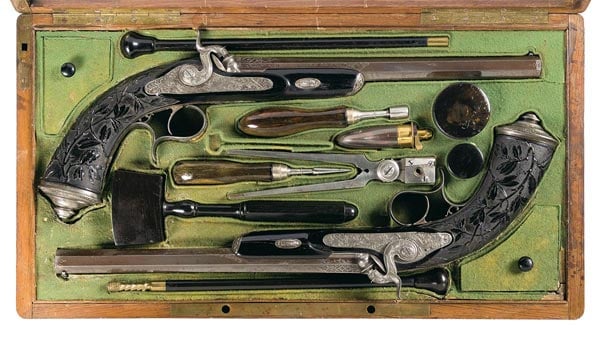 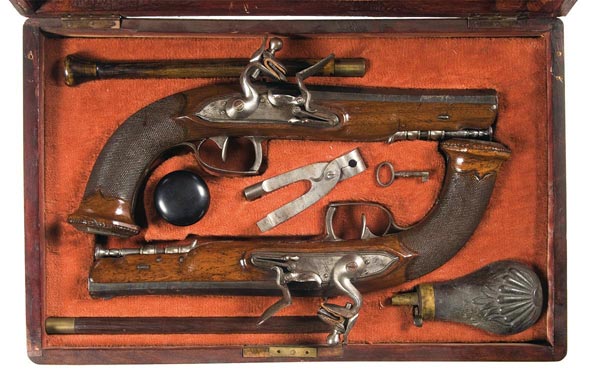 Used infrequently and cherished for centuries means that in most cases collectable dueling pistols should have withstood the test of time remarkably well when compared to other pistols their age. England was at the heart of fine braces of dueling pistols for nearly a century. Such pistols made by the famous gunsmiths Robert Wogdon, Durs Egg, Henry Nock, the Mantons, and others bring exceptionally high prices today ranging anywhere from $3000-$50,000. Other less well-known but sometimes even more sought after guns come from Germany, Belgium, and France. American made pistols, such as those by Tryon of Philadelphia and the Mobile Alabama based F. L. Gelbke & Brothers shop, are the holy grail of this genre. 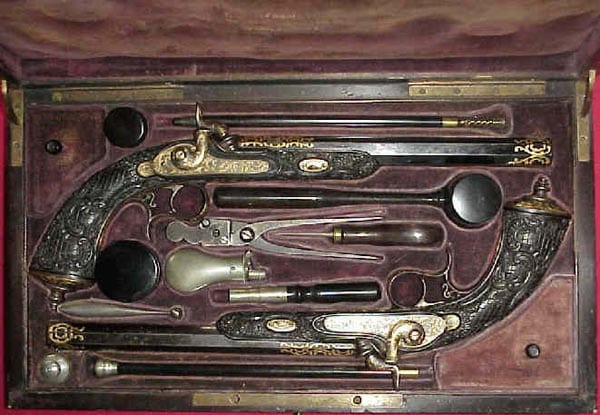 The good news is that you can, in most cases, pay for them in $10 bills. The downside is that you may have to have a second to help you carry all of them.