The HK MP5: Has a greater subgun ever been made? (VIDEO) 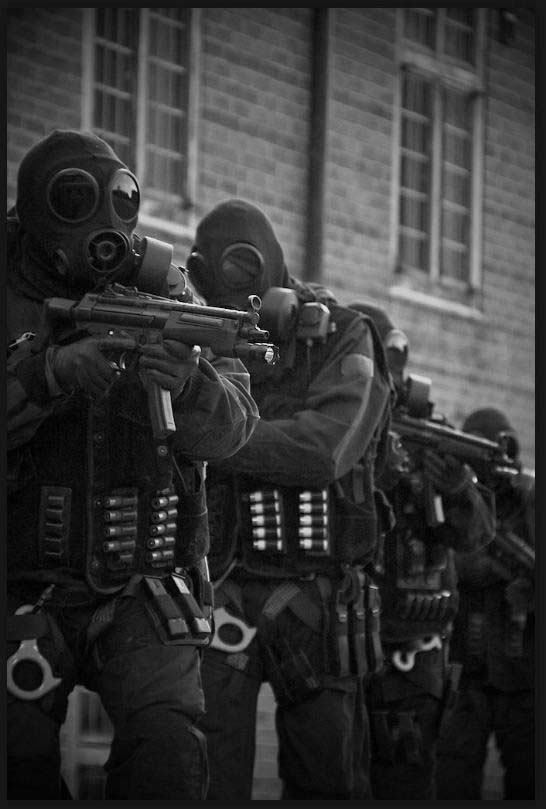 Special ops with their favorite submachine gun, the HK MP5.

From 1918 until the end of the 20th century, the submachine gun had a special place in the armories of military and police forces around the world. Perhaps no better specimen of the species exists than the finely tuned German designed Heckler and Koch Maschinenpistole Number 5, better known by its initials, the MP5. With more than a half century of use around the world, it could in all honesty be the subgun that all others are compared to.

The submachine gun has proven itself one of the most influential types of guns born in the past hundred years. A compact pistol caliber weapon, these guns were the ‘in between’ bridge from a small handgun which could provide five to 15 shots out to 25 yards and a larger, often bolt action rifle that was accurate out to a thousand.

These submachine guns were ideal for non-front line troops such as vehicle drivers and radio operators that didn’t need to lug around a 10-pound rifle. The compact size of these guns and their brutal effectiveness at close range also made them a quick choice for paratroopers, tank crews, and special ops type characters that needed to squeeze into tight places. 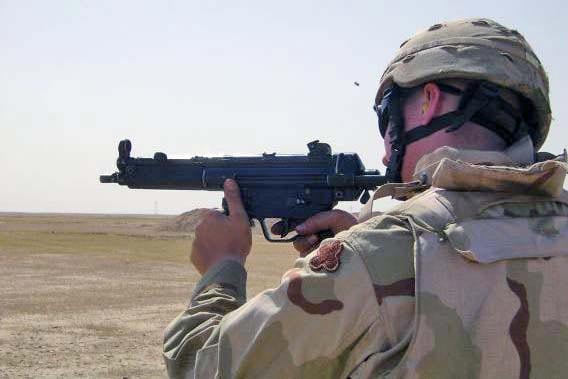 MP5 SMG is perfect for tank and assault crews.

In the early 1960s, the preeminent subguns were the British designed Sterling, the Israeli Uzi, and the Czech Sa vz. 23. These guns equipped the troops of dozens of nations. West Germany, recently formed from the ashes of the Allied occupied Third Reich, was stuck with WWII-era British Sten guns, and a few remaining MP40 style subguns. With the adoption of the new, HK designed G3 rifle by the West German Army in 1959, the company saw the writing on the wall for a new subgun. 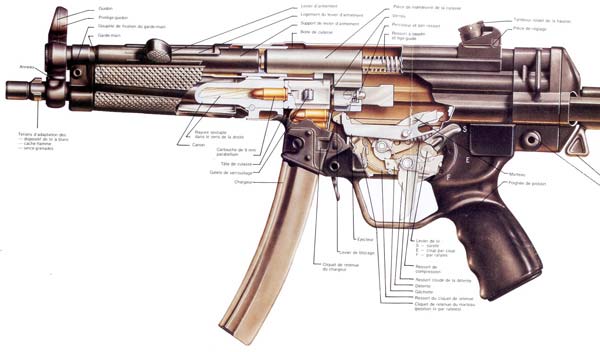 Cut away view of MP5.

Starting in 1964 the HK GmbH team of Tilo Möller, Manfred Guhring, Georg Seidl, and Helmut Baureuter (rolls off the tongue doesn’t it?) began work on the newest product in the growing company’s line. Since the G3 battle rifle had already proven itself, they started there and, in many ways, just downsized the 9-pound 7.62x51mm rifle to a much smaller 5.5-pound, creating a 9x19mm chambered squirt gun. 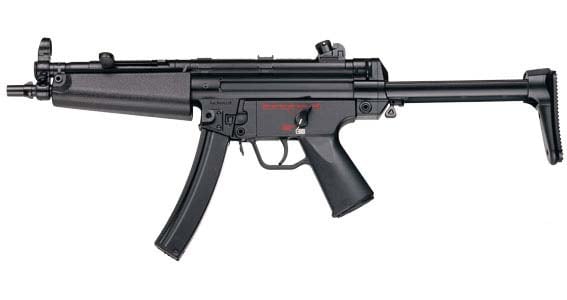 The Heckler & Koch MP5–has a finer vision been captured in a subgun? 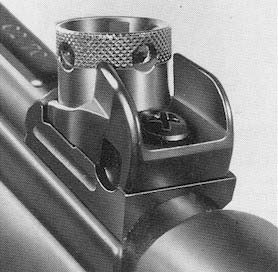 Both guns share the same basic roller-delayed blowback action. The roller lock design, invented by Dr. Werner Gruner and used in WWII on the very successful MG42 machine gun, creates a durable and effective lock up that is as efficient as it is reliable. The blowback action fundamentally treats the cartridge case itself like a piston to work the closed bolt, with the gas of the recoil being transferred through a fluted chamber.

The design triumphed over its contemporaries upon release. The sights on the MP5 (originally dubbed the HK54), especially the rotating rear drum diopter sight, were much better than previous subguns, while its free-floating 1:10 twist

barrel provided accuracy that could not be readily matched by the burp guns of other countries. 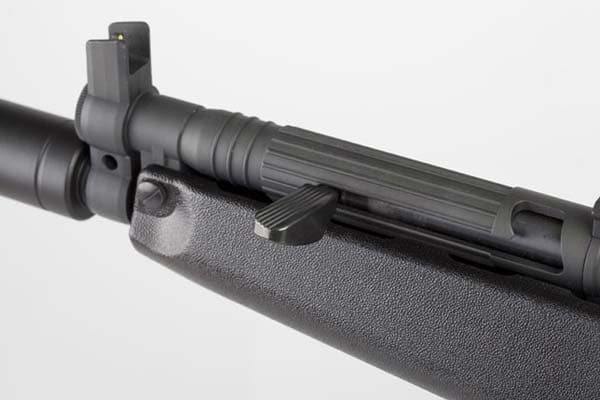 Like the G3/CETME, the cocking handle is located well forward of the trigger group, along the front hand guard. The original model included an 8.9-inch barrel that gave the gun an overall length of 27-inches with an empty weight of 5.5-pounds. Firing from a stick-style (later curved) detachable box magazine, the gun could rattle off rounds at 800 rounds per minute. This was faster than the 500-600 rpms of the Sterling, vz.53, and UZI, while simultaneously coming in a slightly smaller, lighter platform than all of the above. 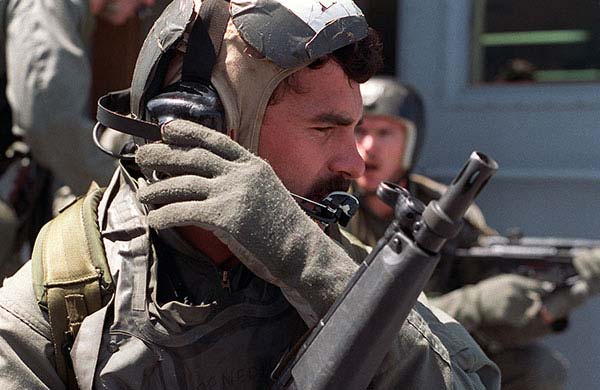 With the new gun design fleshed out and its action patented both in West Germany and abroad, the MP5 was adopted first by the German Federal Police and the Bundesgrenzschutz (BGS) border guards in 1966. After that, the gun took off like a Patriot missile in a world of firecrackers. By the 1980s, it was in use in more than 40 countries and was in licensed production in places as far flung as Turkey, Iran, and Pakistan. 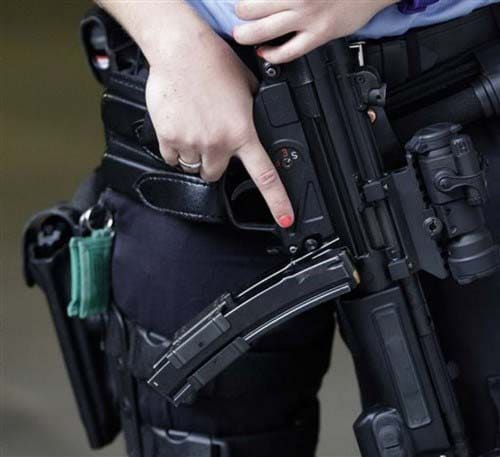 HK MP5 A3 in the hands of a Norwegian police officer.

Perhaps one of the first truly dramatic uses of the MP5 was by the British SAS commandos in their 1980 storming of the terrorist-held Iranian Embassy in London. In a lightning raid, the MP5 equipped commandos rescued all but one of the remaining hostages, and killed five of the six terrorists. In 1981 when the small British Commonwealth country of Gambia was rocked by a coup, two SAS men in civilian clothes, but armed with their MP5s, infiltrated the country, took on some 400 rebels, and reinstated the legally elected government. 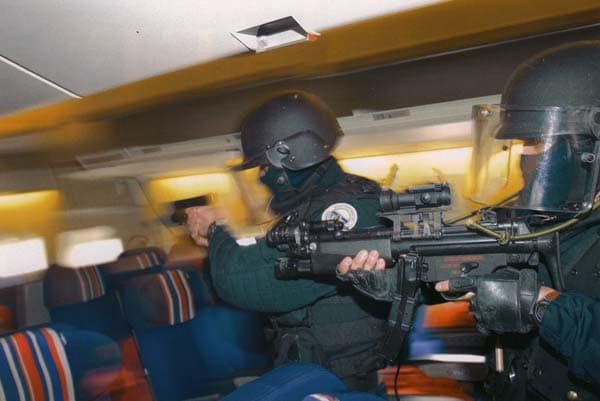 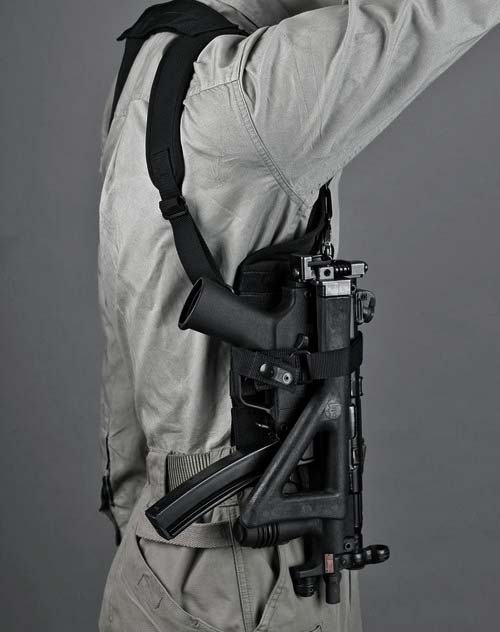 With exploits like these, the MP5 became the basic window dressing of every counter-terror, or spec-ops style unit around the world. This led to a dizzying number of variants in all shapes and sizes including stockless PDW MP5K style weapons, the internally suppressed MP5S, and even an Operational Briefcase. By 1990, everyone from the US Navy SEALs to the Icelandic Viking squad to the Pope’s Swiss Guard had a German designed subgun as their go-to weapon.

It simply seemed like the perfect accessory for the balaclava.

Is the MP5 ever going to die?

Since about 2001, with super-short 5.56mm carbines seeing much battlefield use, the MP5’s days as king of the ‘peashooters’ has waned—at least in US military service. With inexpensive body armor readily available worldwide that will stop 9x19mm like kryptonite, it makes sense for greenside users to leave the MP5 at the armory and roll with the larger M4s when headed into danger. 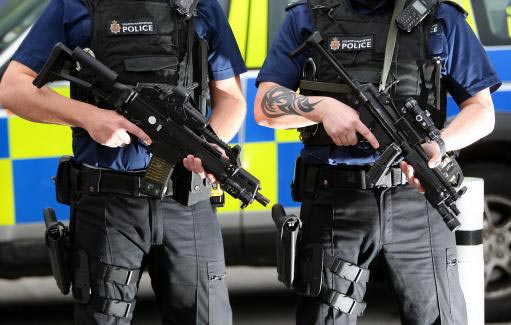 Police sporting MP5 variants. Though not as powerful as 5.56, 9mm is versatile and widely available. 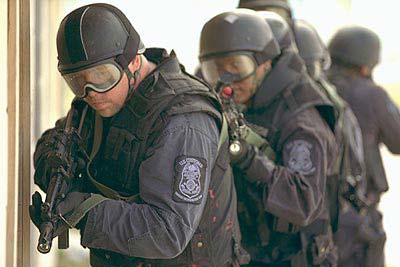 While this same type of thinking has also led to many CT and law enforcement SRT units to be replacing their MP5s with M4-ish guns, there are still thousands out there in regular service. For use in counter-drug lab assaults a suppressed MP5 with subsonic ammunition creates less of a muzzle flash—and resulting risk of explosion in chemically environments. In addition, no matter how you cut it 9mm tends to be more obtainable and marginally cheaper to shoot than 5.56, especially when feeding tactical loads, which will keep it in use in cash poor departments for some time to come. 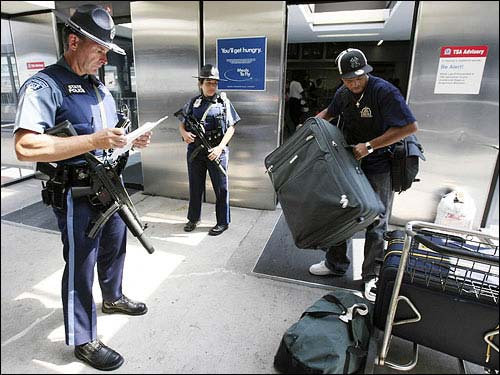 Now in its 47th year of production, the HK MP5 family is still going strong. While it has been replaced in regular military service, it is still a beautiful piece of finely engineered hardware that will most likely continue to endure. In the US, it is believed that a very large portion of the 488,065 registered machine guns in the US are transferable pre-86 HK guns. These often go for over $25K but are a proven crowd pleaser. 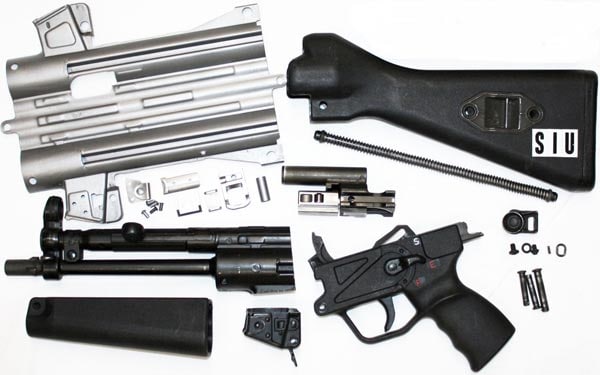 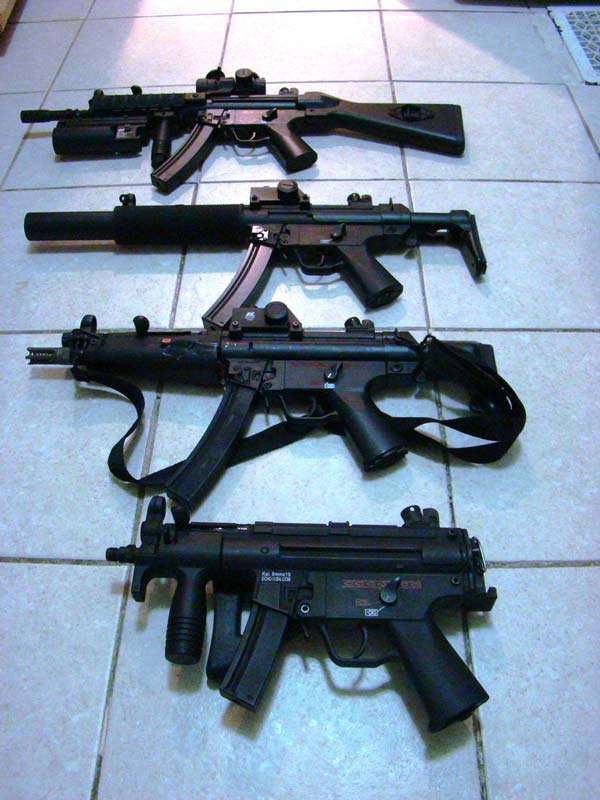 A tasty array of MP5 variants.

For those who are shy of the needed Form 4’s and would rather spend more money on ammo than on a gun, there have been a whole crop of US shops that make semi-auto clones of this popular gun. These have included Dakota Tactical, Bobcat Weapons, Cohaire, and Vector Arms made guns that range anywhere from $1400-$4000. HK makes a semi-auto version for the civilian market, the SP89, and it runs at the very German price tag of about $5000 as the Clinton Administration cut them off from import in 1989.

Of course, there is always the GSG 22LR version that runs for about $600.

Either way, the MP5 seems to have come out on top as the People’s Choice of 20th Century Subguns.