So you are a frogman and, while you are froggin it up, you come snorkel-to-snorkel with another wetsuit-clad combat swimmer. You reach for your dive knife but come up short because you realize that you just brought a knife to a gunfight. Well, that dastardly commie has a SPP-1 pistol, and it works underwater.

Underwater divers have been used by militaries around the world for centuries. As far back as the 1843, the British Royal Navy and others used divers for salvage. However, these early divers were tethered to the surface by lines that fed oxygen. The first ‘frogmen’ who swam independent of support ships had to do so with just a set of fins, a facemask, and a knife. These early combat swimmers reconned beaches in World War 2 as well as planted explosives when the opportunity arose.

It wasn’t until self-contained breathing apparatus including open and closed circuit varieties came about in the late 1940s that military divers could stay below the surface for longer periods. This new technology led to a greater flexibility of operations that included the laying of limpet mines on enemy ships in harbor. Soon most modern navies had specialized teams of frogmen optimized for underwater recon, sabotage, and other dirty deeds done dirt-cheap. 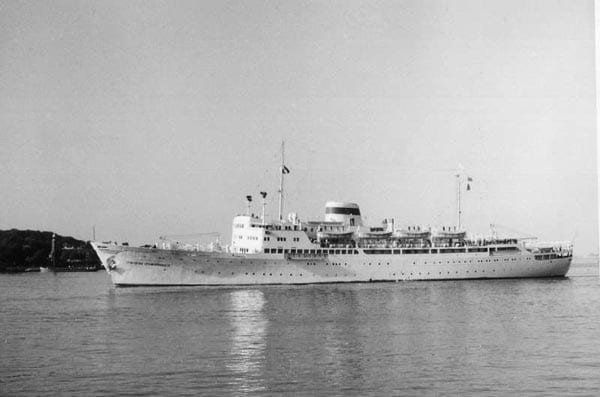 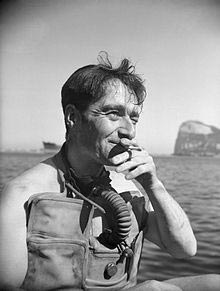 In 1956, the Soviets and British both caught a dose of diver versus diver combat. The cruiser Ordzhonikidze was visiting the British base of Portsmouth and Lionel Kenneth “Buster” Crabb, a former Royal Navy diver thought to be in the employ of British Intelligence, disappeared in the harbor during the ships visit. Fourteen months later, his body, sans head and hands, washed up. In 2007, a former Russian frogman finally claimed to the press that he had killed Crabb with a knife as the Brit poked around the Ordzhonikidze some fifty years before. It was the only weapon available.

It was this incident and others that may never be known that led the Soviets to develop an underwater pistol. 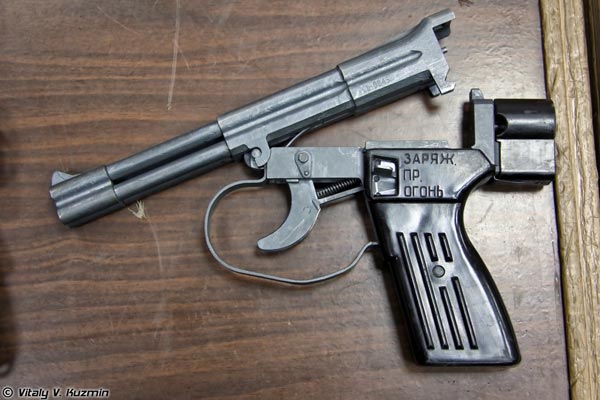 The man selected to turn out such a weapon was Vladimir Simonov (no relation to SKS inventor Sergei Simonov) of the TsNIITochMash plant. His design was a simple four-barreled hinged-break pistol that shot a very special round. More or less a giant derringer, the gun had one round in each chamber with an opening in the bolt face of each for the striker. The double-action trigger cycled the rotating striker, firing each 8-inch long smoothbore barrel in turn with each trigger pull. Since it was designed to be carried and used in the harshest saltwater of the world’s oceans, the gun was to be built of non-corrosive metals with specially coated internals and plastic furniture. To accommodate the thick neoprene gloves of divers operating in subzero waters, the trigger guard and combination safety lever/barrel hinge lock are oversized. 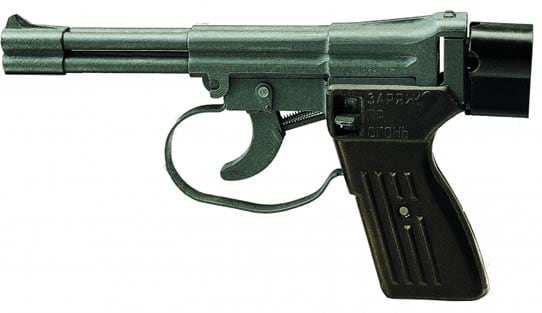 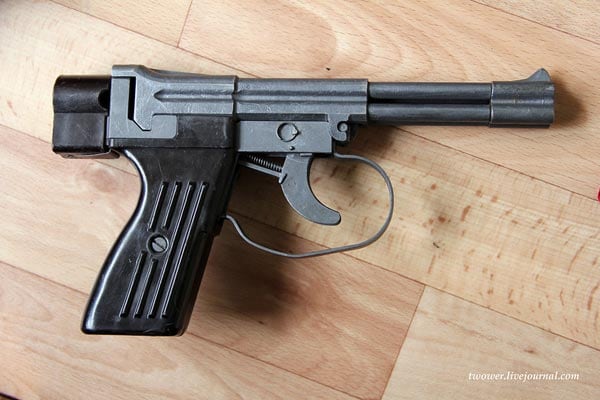 The resulting gun was quite long, at 9.65-inches overall (more than an inch longer than the Colt 1911, which you can see shoot underwater here) with an empty weight of 30-ounces. One reason for its magnum-size envelope is to allow greater tolerances for the gun to be fired while completely immersed at depths up to 150-feet.

Classified as the Spetsialnyj Podvodnyj Pistolet (Russian for ‘Special Underwater Pistol,’ apparently to differentiate it from the plain underwater pistol) model 1, its moniker is commonly shortened to SPP-1 when written. 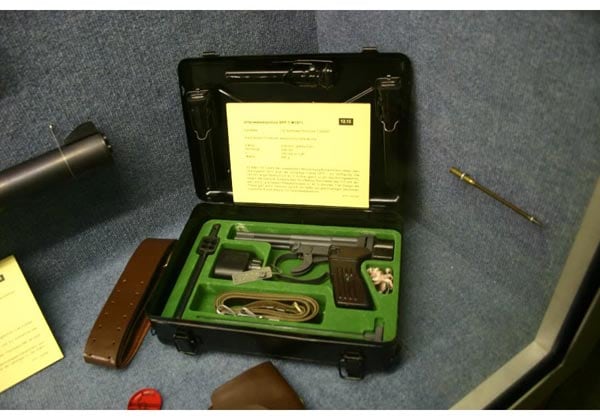 SPP-1 with ammunition and other accessories.

The ammunition intended for this frog-gun was the specially designed SPS round, consisting of a 4.5mm caliber mild-steel flechette dart loaded atop a 39.5mm bottlenecked case. The overall look is as if you took a .223 case and stuck a four-inch steel dart into the opening, only stranger. When fired underwater it is drag-stabilized and accurate to about 50-feet. A blunt tip and finned tail allowed it to create a wave of cavitation in front of it as it moved through the water, retaining velocity over distance. This hopped up spear/bullet is capable of penetrating hard glass facemasks and thick neoprene wetsuits.

While both the gun and the ammunition can still be fired on land, range out of water is poor as is accuracy. For quick loading/reloading, a spring steel clip that can be replaced as a unit holds all four rounds together. This is helpful in dark, underwater environments by divers with gloved hands. 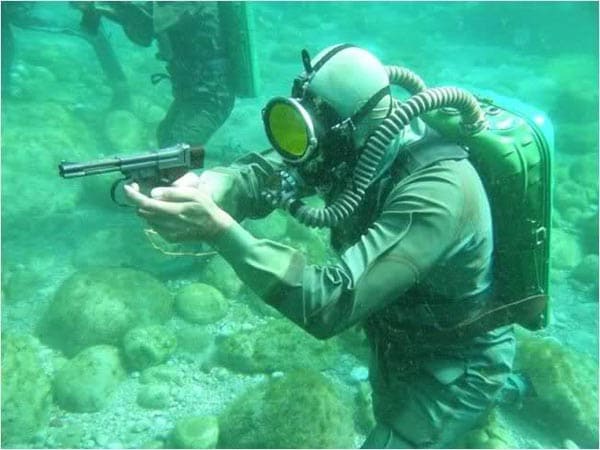 Soviet SPP-1 underwater pistol in use by Russian frogman.

Designed throughout the 1960s the SPP-1 was placed into low-rate production at the Tula works in 1971. The Soviets during this period had thousands of naval spetsanz troops, roughly their version of our Navy Seals, that were undoubtedly issued these guns. While their operations during the Cold War are written in invisible ink in books that you aren’t cleared to read, you can no doubt safely wager they were used occasionally. The success of the design led to Simonov’s creation of a larger, APS underwater assault rifle system. 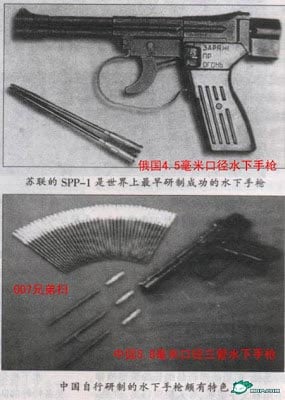 When word hit the street about the Russki’s underwater arsenal, the NATO guys went about getting their own cooler version. Made in the 1970s, the German-made HK P11 met the Soviet 4-shot 4.5×39.5R with a 5-shot 7.62x36mm underwater dart gun. Incapable of being reloaded, the device was in effect disposable. The German gun was bulkier but slightly smaller and fired from an electrical ignition—but that’s another article.

While it’s believed the HK scuba sniper has long been discontinued, the SPP-1 is still going strong and is still in current production by TsNIITochMash (where it was invented.) The Chinese liked the design so much that they created the “Type QSS05 underwater pistol,” a near copy, from the Soviet original. Today, as the slightly improved SPP-1M, it’s used by the Russian Navy as well as sold for export to any country close to Moscow with a bank account.

I guess they are still scared of frogs.