The Old Man and the Sea (and his Tommy Gun) 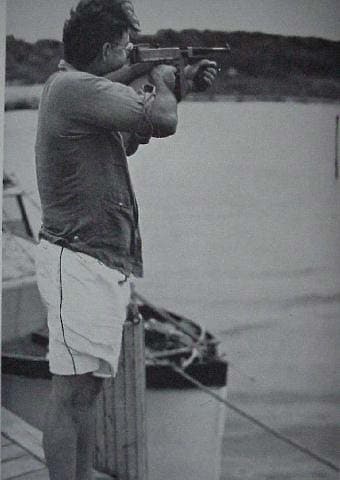 Ernest Hemingway‘s famous work, the Old Man and the Sea, may be truer to life than you know. It seems the sportsman/writer had his own run in with a pack of sharks over an immense half-ton marlin. Little did they know the Heming-way includes packing a Thompson submachine gun in the tackle box.

The original ‘Most Interesting Man in the World’

Ernest Miller Hemingway, born in the last six months of 1899, seemed to be in a life-long competition to stamp every spot on his man card. At age 18, he was wounded on the Italian front during World War 1 while serving as an ambulance driver. He later served as a war correspondent in no less than three real live shooting wars, even taking a break in 1944 to help organize an attack on a German position by 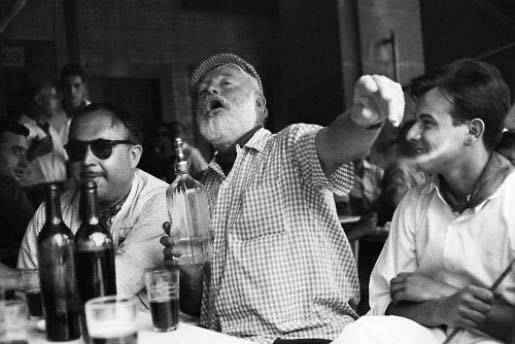 Drunken boasts notwithstanding, Hemingway’s most famous fish tales were based on real life experiences.

French Resistance in World War 2. An amateur boxer, he used to sponsor his own version of tough man competitions, offering $50 to anyone who could do the distance in the ring with him. He and Orson Welles even had an impromptu battle of the beards over a disagreement that led to superman punches and broken chairs WWE-style, later patched up over whiskey.

Papa walked away from brushfires, sinking ships, five car crashes, and no less than two separate plane crashes in Africa, one of which left him with a paralyzed sphincter and leaking cerebral fluid. A hunter and an angler, he scoured the planet catching big game pelagic fish as well as the toughest beasts on several continents. 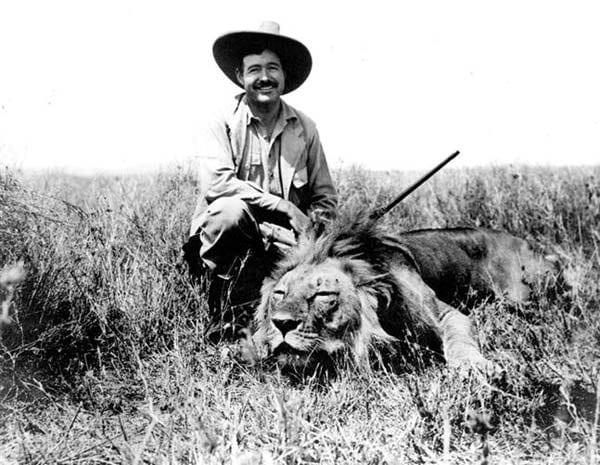 Hemingway with lion on safari.

When not otherwise covering wars, catching fish, or getting married four times, he also got some writing in (seven novels, six short story collections, and two non-fiction works) which earned him the Nobel Prize in Literature in 1954. 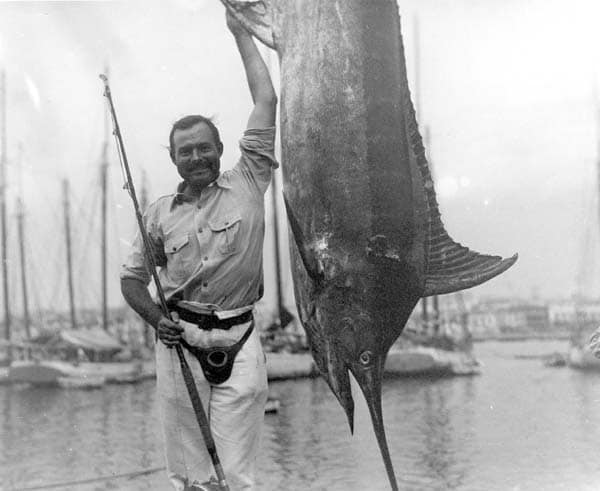 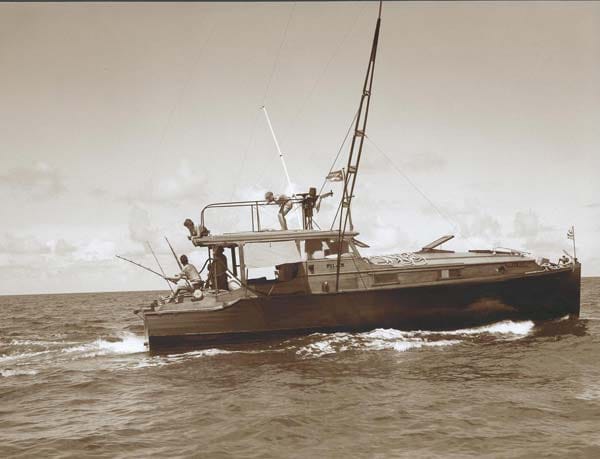 The Pilar out to sea.

On top of all this legendary adventuring, one of the most interesting events that happened to Hem happened in 1935. At the time he was poking around Key West, Cuba and the Bimini islands in his pride and joy, the 38-foot cabin cruiser Pilar, named after one of his wives. He chased the biggest monsters under the sea in this boat, winning deep sea fishing competitions across the Caribbean. Just a couple years earlier, he caught no less than 52 marlin by himself. In that hot spring and summer of ’35, Hemingway and a friend, painter Henry (“Mike”) Strater spent 86 days in a row at sea, and had nothing to show for it. Then they had a bite. 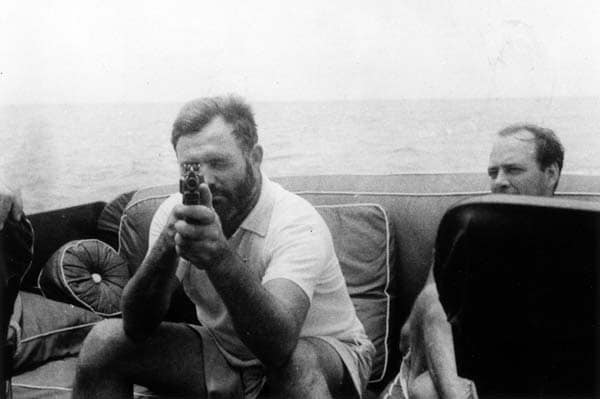 Ernest Hemingway and aboard the Pilar in 1935. 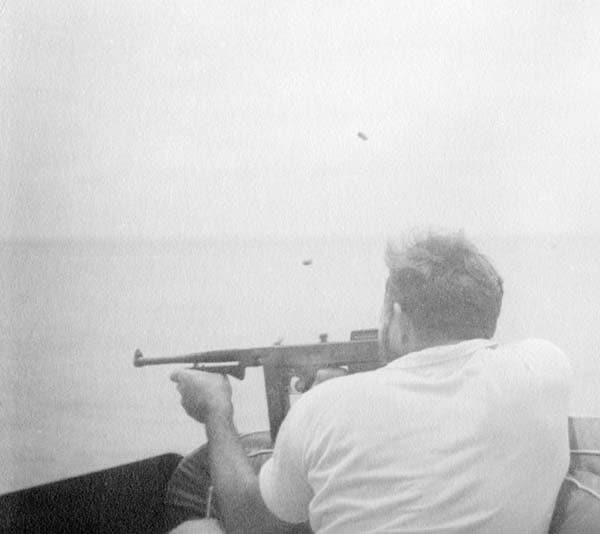 Hemingway and his M1921 Tommy Gun (never leave shore without one).

On Strater’s line, they brought a leviathan fish, more than 14 feet long to the surface. It was a giant marlin. Nevertheless, before the two could bring the fish in, sharks appeared to attack the tired billfish. Hemingway, in an effort to beat the sharks away, grabbed his his trusty Thompson submachine gun (which he always took with him to sea) and began riddling the seagoing wolves with bullets. Ripping .45 ACP rounds out into the water at up to 850-rounds per minute, Hem churned up the ocean, hitting a number of sharks and adding their blood to the rapidly growing chum pond. This in turn brought in more sharks just as sure as ringing a dinner bell.

When the fish was finally brought into the boat, it had been ‘apple-cored’ with the entire back half of the creature stripped of every bit of meat down to its spine. When landed, it was 14-feet, 6-inches long and still weighed some 560-pounds. It was estimated that if the back half had not been consumed, it would have gone nearly a half ton or more, which would have been a local record for Bimini. 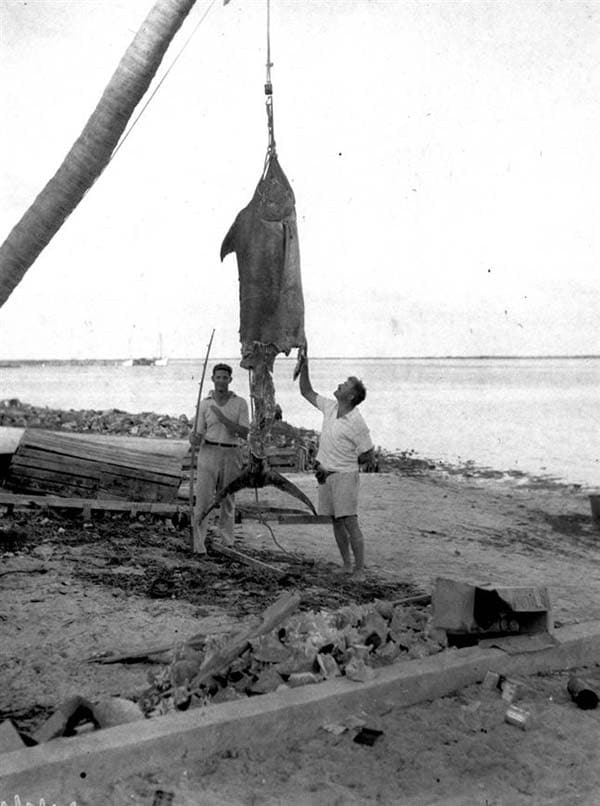 The “apple-cored” 1000-pound marlin that inspired a modern classic in American letters.

Hemingway’s Thompson Model 1921A, with the detachable buttstock, front pistol grip, was made by the Auto-Ordnance Corporation. In the days before the NFA of 1934, it was perfectly legal for any citizen to buy one of these guns mail order without tax stamps, fingerprints, CLEO signatures or the like.

The Thompson subgun Hemingway owned and favored was the model 1921 like this one. You can tell by the barrel fins, block rear sight and lack of Cutts compensator on the muzzle.

According to legend, the writer obtained it in a game of chance from multi-millionaire William B. Leeds. Hem’s particular gun had the early ‘pre-1926’ styling with its radial cooling fins, on a 10.5-inch barrel with no Cutts Compensator.  These early models had a much higher rate of fire than the later WWII-era Tommy Guns as well as a beautiful fit and finish. Hemingway seems to have preferred the 20-round box magazine for its accuracy rather than the 50 and 100-round drums that were available and more iconic. It has been noted by many Tommy gun users that the drum mags made the weapon unbalanced and inhibited accurate shoulder firing due to the odd angle it forced the support hand into. Hemingway seems to have agreed. 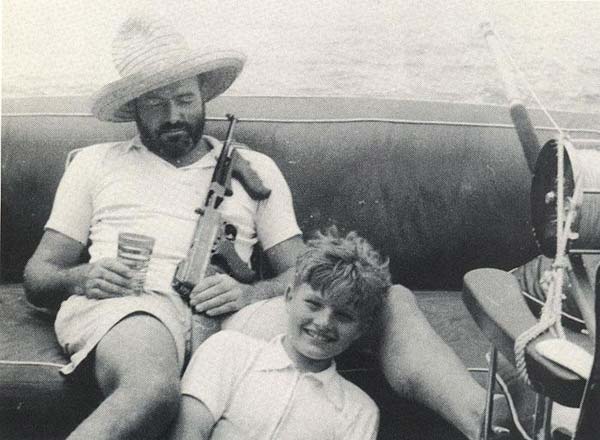 Hemingway and son Jack wait for a nibble on the Pilar. Note the massive size of the reel (and Tommy gun). 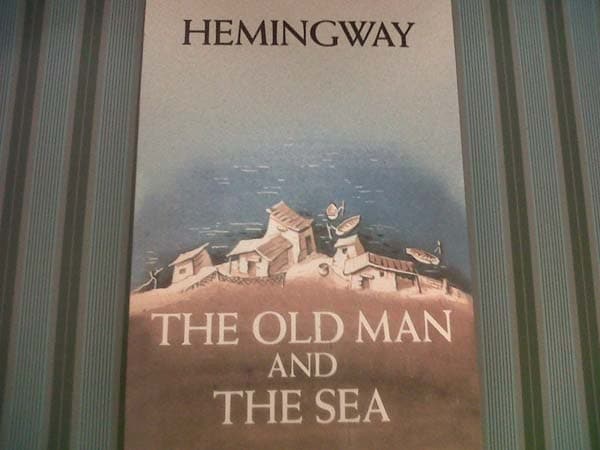 The author spun the experience of this epic fishing trip into several works of fiction. The novel Islands in the Stream, as well as his later work, The Old Man and the Sea, drew heavily from Papa Hemingway’s life on the water including this incident. As you may remember from high school lit classes, in The Old Man and the Sea, the hero, Santiago, catches an immense marlin, the largest he had ever seen, only to have it apple-cored by a pack of sharks as he hopelessly tries to beat them away.

Hemingway himself once said of writing: “All good books are alike in that they are truer than if they had really happened and after you are finished reading one you will feel that all that happened to you and afterwards it all belongs to you: the good and the bad, the ecstasy, the remorse and sorrow, the people and the places and how the weather was. If you can get so that you can give that to people, then you are a writer.” 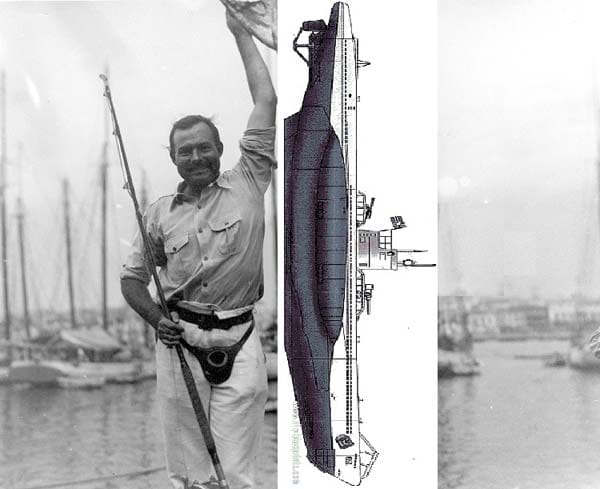 Papa never did catch that u-boat.

Strater and Hemingway parted on bad terms, with both voicing their own hard feelings over the loss of (half) of such a beautiful fish. Hemingway remained in Cuba for most of the rest of his life other than World War 2 and a 10-week safari to Africa. Speaking of WWII, the sportsman offered to take the Pilar out on wartime patrols in the Florida Straits looking for German U-Boats who were sinking ships almost nightly in 1942. Surprisingly, the local government accepted and Hem loaded up his fishing boat with radio equipment, a crew of trusty volunteers, hand grenades, and…wait for it…his tommy gun.

While he never did find that U-Boat, it wasn’t for lack of trying.