The Ruger P-guns: The 80s are calling, they want their handguns back (VIDEO)

Picture if you will the Eighties: The Gipper was president, Stretch Armstrong was king of the schoolyard, and Atari was cutting edge. It was also the age of the Wonder Nines: high capacity nine-millimeter pistols for everyone and their brother. And like Yakov Smirnoff and shoulder pads, Bill Ruger’s P85 is a forgotten favorite of this not soon forgotten era. 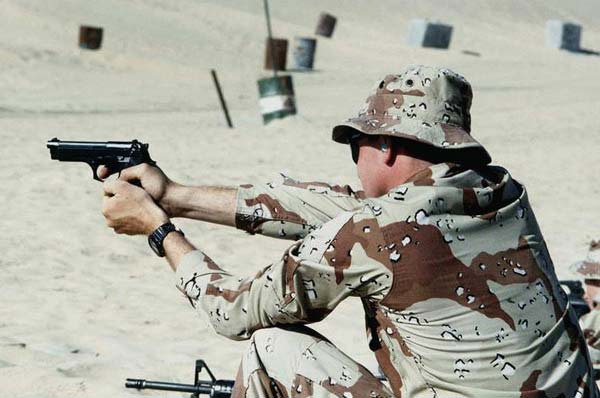 In the early 1980s, word got round the firearms industry that the largest military force in the free world, the US Army, was going to conduct a series of handgun trials to select a new pistol. The winner of the testing would possibly get a series of huge contracts to not only replace the vaunted but aging stocks of 1911 .45 ACP guns, but also a myriad of .38 revolvers for the entire military. The Army, making things easy, asked for each pistol submitted to meet no less than 85 requirements. With such a huge carrot being dangled, the firm of Sturm, Ruger started designing a new military handgun. 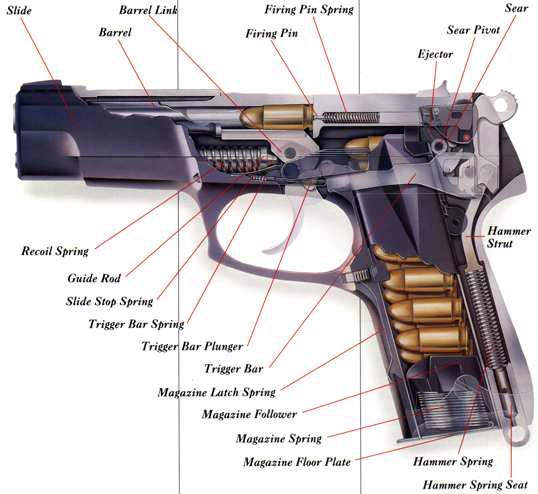 The Ruger design team came up with a blended combat pistol that borrowed something from many of the best guns that preceded it. From John Browning’s M1911 they took the titling barrel with a link and married it to the SIG P220‘s short recoil–operated, locked breech action.  The frame was made from aircraft grade investment cast aluminum alloy, which was novel at the time, while barrels etc. were made from stainless steel. This enabled the company to produce a gun lighter than an all-steel piece, without going full polymer. Grip panels, in a move away from hard plastic or wood, were GE Xenoy. The guns were to be made at the company’s then-new Prescott Arizona factory. 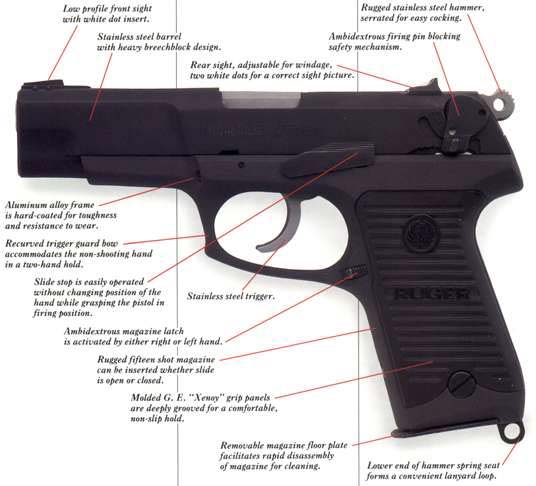 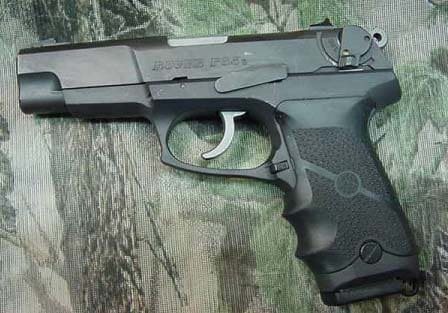 Having 58 named parts, it was simpler than WWI/WWII era combat pistols like the M1911 and the Browning Hi Power, but still more complicated than polymer age guns, led by Glock. To keep it easy for soldiers to operate, it was double-action/single action with a safety decock and active trigger safety. However, it was a super reliable design that could gobble up just about any factory load you could fit in the 15-round magazine.

Oversized and often ambi surface controls such as the slide lock, decock/safety, and huge trigger made it clear that the pistol was to be used for military and police officers, ideal for duty holsters wearing gloves, but not for concealed carry.

Use, issues, and redesign 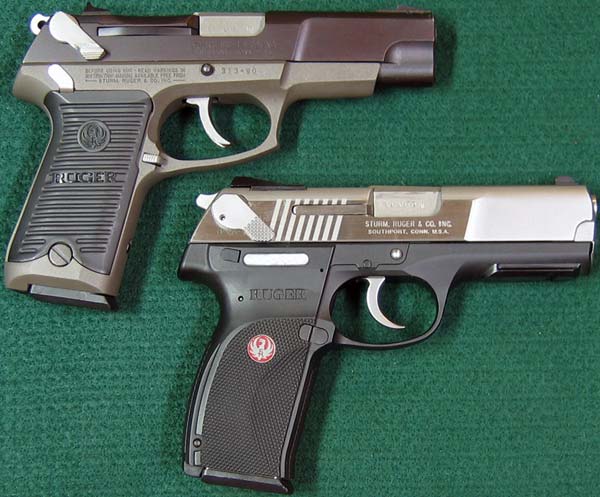 The P89 above was later augmented by the P345 below, which is a dead ringer for the single stack SR9, SR40 and SR45 series today.

Needless to say, Bill Ruger did not win a large contract from the US Army. The P85 arrived too late (1987) to compete against the other makers for this mother lode of an order. As such, Beretta won the hotly contested event and for the past quarter century the military has been carrying their M9 (Model 92) into war zones. Ruger’s P-series, however, did fall into a nice niche as a blue collar 9mm, offering a low-cost double stack combat pistol to the police and civilian markets with a good bit of success. 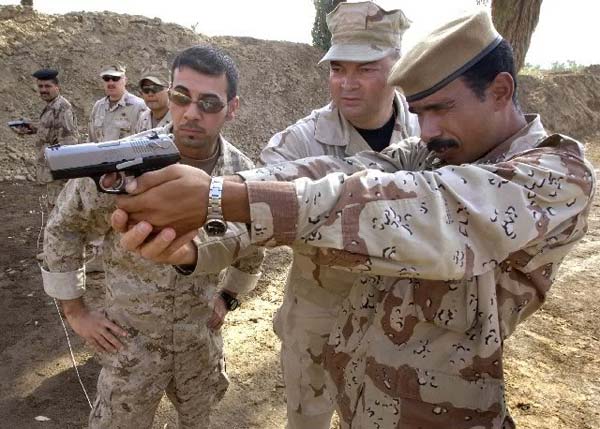 The P95 was later sold in small numbers to the US Army and several were sold later to the post-Saddam Iraqi army.

In 1990, the P85 was replaced by the virtually identical slightly upgraded P89. At about the same time the family tree was expanded to include variants in .45ACP (the P90/97) and .40S&W (P91/P944). Then, to shrink things up a little, the compact but still chunky P95 was introduced. To keep prices lower on the P95s, Ruger switched from the aluminum frame to a fiberglass/polymer, which made it lighter as well as cheaper.

End of the line

Well it was fun while it lasted but by the 2000s, the P85/89/95 line was dated. Compared to the new and sexy 3rd Gen Glocks, Smith M&Ps, and Springfield XDs, the Ruger products, even if they 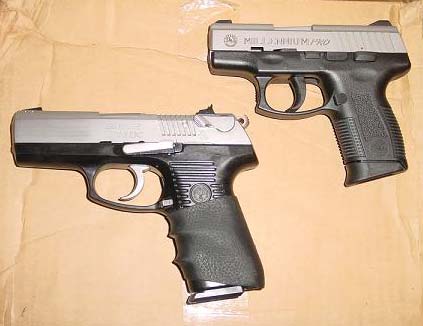 The P95, bottom, was Ruger’s last attempt at an inexpensive 9mm double stack but it lost out to smaller and cheaper imports like the Taurus, above, by the 2000s.

were slightly cheaper, were low speed/high drag. On the other side of the spectrum, they were undercut by the still-cheaper and even clunkier Kel Tec, Taurus, and Bersa lines in the competition for bargain gun status. As a last chance at rebooting the line, they came out with a more streamlined 45ACP, the P345 in 2004 to a fizzle. By 2011, the last P-series Ruger came out of Prescott with a MSRP of $399. Ruger still maintains the P-series website and mentions the P95 in their catalog, but as far as we can tell, they’re not making any more of the guns.

Currently it would seem that Ruger has left the glutted full-sized double-stack, duty pistol market in favor of more compact CCW-style guns like the SR and LC series.

These guns are just barely out of production and hundreds of thousands are out there floating around. Used guns, especially older P85/89s can often be found on gun show tables for the $200ish mark in good condition. Even minty guns with cases, stainless finishes, night sights, and spare mags can be had for under $400, which largely can be seen as a bargain. Fjestad lists a few long discontinued variants at over $500 in 100% condition, which lends thought to potential collectability in the future. With that being said if you find a nice one and don’t have to shoot it, it could be an investment. If you have a more common one with scratches, shoot it till it glows. 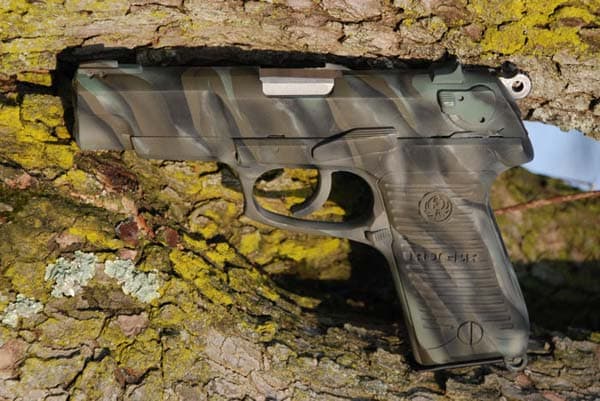 A well used P-series pistol can be an inexpensive project gun. 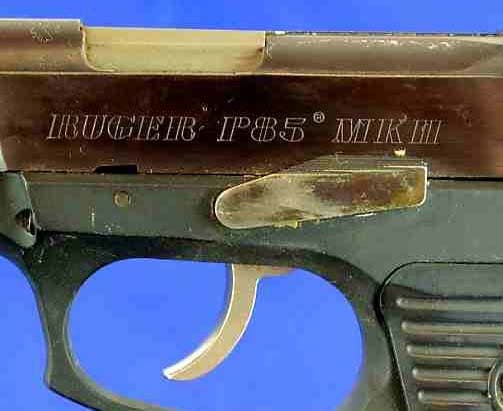 Early P85s were subject to a recall in the late 1980s due to an issue with the drop safety of the gun. Due to this, guns that shipped with the improved design will have ‘P85 MKII’ on the slide. Guns that were later upgraded by the factory will have ‘MKIIR‘. If you have a P85 that has no mention of this anywhere on it, you may want to contact Ruger to get it retrofitted while they are still doing it for your own safety.

Parts are still widely available for most of the P-series but magazines and some of the high value items like barrels are starting to get scare, and therefore more expensive. Sturm, Ruger still supports these, but as the years click by this may wane.

That is, unless they go back into production in a decade or so as a ‘classic’ pistol. Stranger things have happened.