When you think about fine fully auto machine pistols, the Glock 18, Micro UZI and Beretta 93R come to mind. What you may not know is there is an even smaller one handed buzz saw out there, and it comes from south of the border.

What is a Trejo? 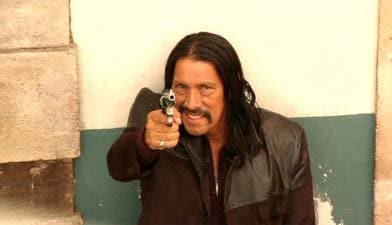 No, this is not what we mean when we say ‘Trejo‘ pistol.

The small family run firearms concern of Armas Trejo SA was a powerhouse for durable 100% domestically made pistols in Mexico for over two decades.  Founded in 1948, Mr. Abraham Trejo Solís and his father Don Gabriel Trejo firearms company set up shop in the Puebla state town of Zacatlán de las Manzanas. The town was well known for its local apple orchards and therefore, all of the Trejo family pistols were emblazoned with a stylized version of that fruit. 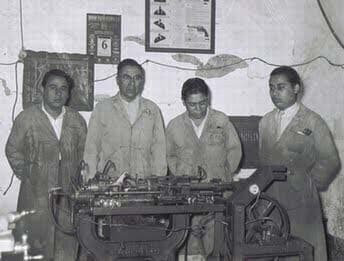 The Trejo gun works was a family affair with a reputation for taking great pride in their work.

With a staff of family and friends, they produced a steady output of about 75 completed pistols per week.

Between 1948-70, the company produced an estimated 100,000 quality semi-auto and select fire handguns in a number of models. While most of these were semi-auto knock offs of the Colt 1911 design (more on this to follow) about 13,000 had the capability to truly rock and roll.

All four of the Trejo designs, the Modelo 1, 2, 3, and 4 (hey, why complicate things) were scaled down versions of the old school John Browning-engineered Colt single action 1911 pistol. The Model 1 was a 6.3-inch long, 22-ounce in weight, 22LR with an 8-shot single stack magazine. The Model 2 was slightly larger version of the M1 with an 11-shot mag. The Model 3 was a 7-shot .380ACP (a version of which was also made in .32ACP for the Mexican Army) that ran 6.6-inches long and 24-ounces. The final model, the 9mm Model 4, was only made in small numbers for export, as civilians cannot own guns of this caliber in Mexico (though many do). 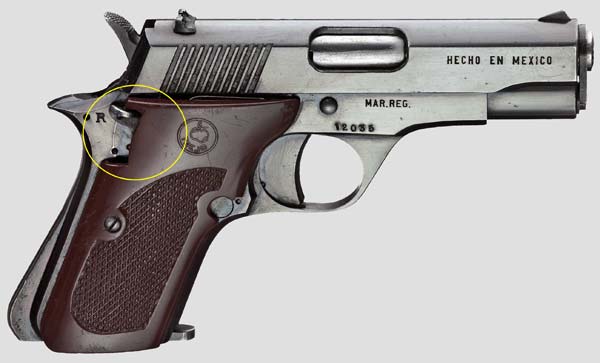 On select fire model Trejo pistols, the selector switch is at the rear of the right hand side of the frame.

What all of these had in common was a rakish forward slat that gave it a slightly out of battery look too it. Between this slant and its much smaller size (2-inches shorter and a pound heavier), it rather looks like a toy 1911. Exterior controls such as the single action hammer with large spur, trigger, slide stop, magazine release, and blade-like rear grip safety are very close to Mr. Browning’s gun, but scaled to size. The gun even replicates the tiny fixed sights. The gun breaks down the same and has the familiar 1911-ish barrel bushing, guide rod/spring/cap, and a short recoil pivot-link barrel. 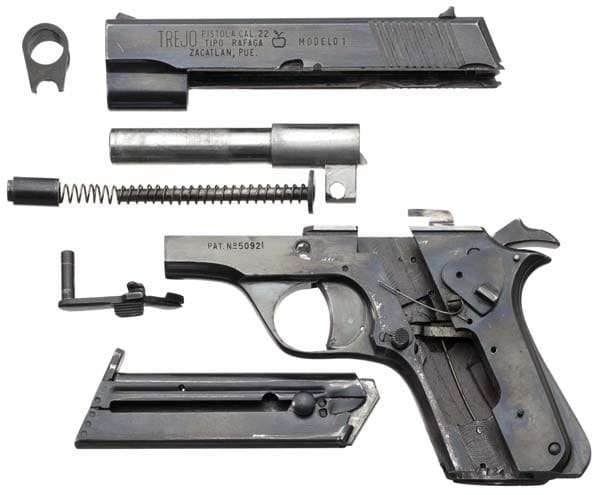 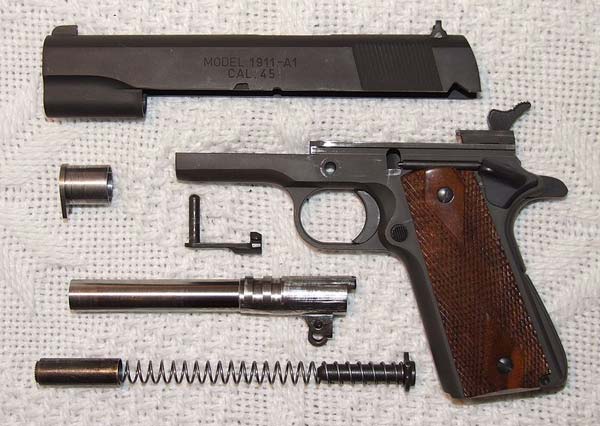 What is not the same as the standard 1911 .45 is that several Trejo models came in a factory sub variant after 1952 that was select-fire. Both 22LR pistols, the Modelo 1 and 2, were made in this fashion. At the time in Mexico, only centerfire pistols and rifles were regulated to be semi-auto only. No such restriction applied to the rimfire guns. Some 13,000 M1/M2 Trejo guns left the factory with a selector switch on the right hand side of the frame that controlled a modified internal sear, allowing the little pocket pistols to roar out a 1400-round per minute burst. When you take into account that either the 8-round M1 or the 11-round M2 magazine was drained in about 3/10ths of a second, you could see how this could be a fun gun to have around! 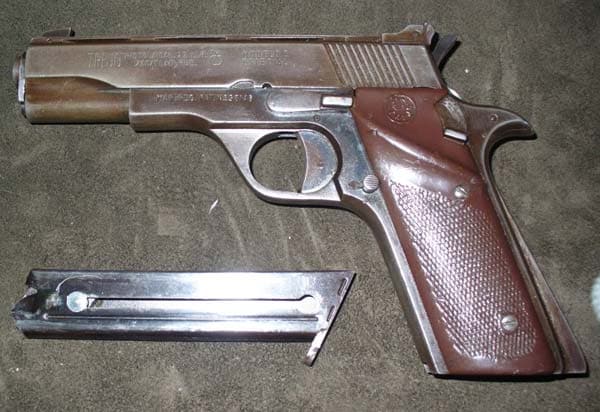 Trejo sold a great many guns both inside Mexico and as exports both to Europe and over the border to the US. This is especially true of the handy little ‘rafaga’ select-fire jobs that, while still registered under the NFA of 1934, were legal to import to the US. Then in 1968, the import ban stopped both the semi-auto and select-fire Trejos from legally coming north, which proved a heavy strike against the company.

In 1971, the wheels fell off private firearms ownership in Mexico and the republic adopted a Federal Arms registry, controlled by the Ministry of National Defense. This effectively shut down the purchase of guns by private citizens. Today just a single military-run gunshop is licensed in all of Mexico, where pre-approved buyers queue for months to get .22 rifles, shotguns, and handguns (in caliber .380 and under). 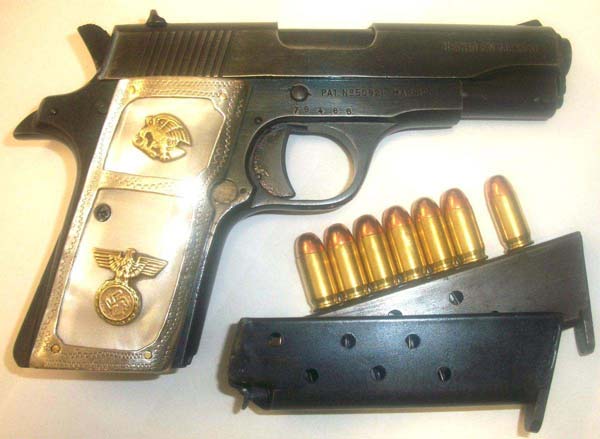 Blinged out model 3 Trejo pistol complete with both Mexican and (for reasons unknown) German Nazi eagles on the grips.

With such draconian laws, no export potential, and an order to temporarily stop making guns by the government, Trejo folded shop. The last of the spare parts, guns, and machines were gone by 1972. 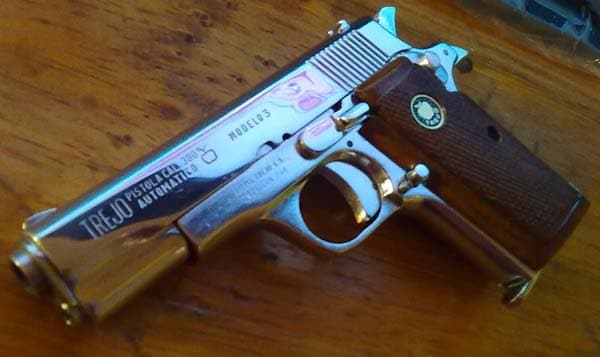 Back in the old days when the southern US border was even more wide open, we can be sure that a good number of Trejos walked across the line without papers. While this is not an overwhelming problem for the common semi-auto only pistols of the line, it’s a big issue for the much more entertaining full-auto ones. But for those that were registered properly, they are the uber-cool NFA gun designation known as a Class III C&R. According to Section IV: National Firearms Act Weapons Classified As Curios Or Relics Under 18 U.S.C., Chapter 44 the : “Trejo, selective fire machineguns, caliber .22, mfd. in Mexico, circa 1952 to 1972” are C&R eligible (but still have to have tax stamps etc.). 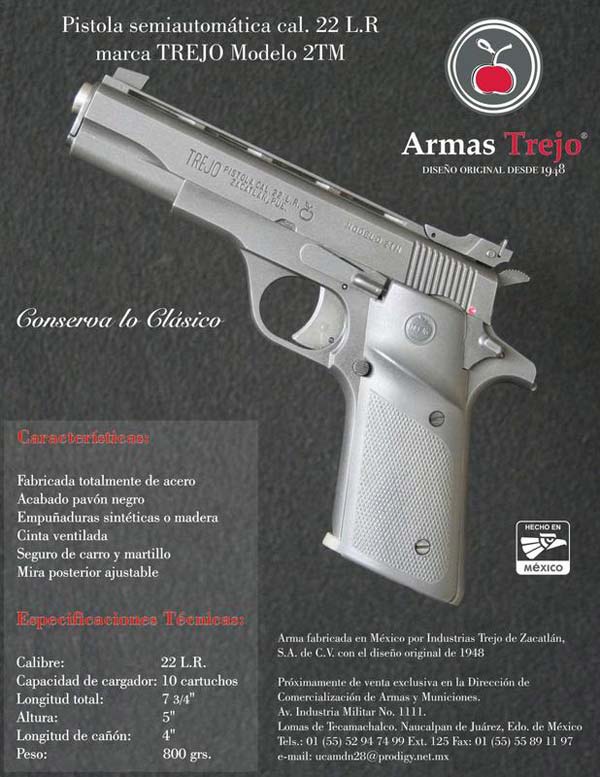 The new Trejo Modelo 2 has been for sale since 2010 (it does not feature full auto).

All Trejo pistols will be marked as such on the slide, grips, and magazine floor plates with both the ‘Trejo’ name and the signature apple logo. On the right hand side of the slide, near the muzzle will be ‘Hecho en Mexico’ Select-fire versions of the Modelo-1/2/3 will be marked ‘Tipo-Rafaga’ and the selection lever will have an “R” marked for full-auto (Rafaga). Semi-auto guns in good condition tend to go for $300-ish while select-fire models with the right papers will fetch about $4K. Both are typically found in good condition and pop up occasionally in the US, but be wary of how much you shoot these sometimes half-century old guns as there are practically no spare parts out there if you break something.

In 2010, the grandsons of the original founders of the Trejo pistol works petitioned the government in Mexico to go back into limited production to sell new versions of the old designs at DECAM, the Mexican Army’s gun store in the capital. Today they are making the Modelo 2, in semi-auto only and with a rubberized grip rather than plastic, in small numbers after a 40-year hiatus. To get around Mexico’s current limits on magazine capacity, it has a 10-shot rather than the legacy 11-shot mag of yesteryear. 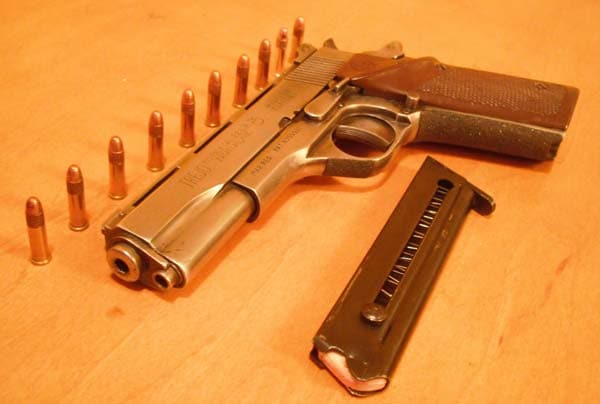 Too bad the Tipo-Rafaga models aren’t back and importable, or we’d already be taking a number and waiting ourselves.