There was a time when vampires, zombies and the undead were not the only cemetery problems we faced.  There were, in fact, very real dangers of grave robbing in the (crooked) name of medicine.  To combat the body snatchers?  Cemetery guns, of course. 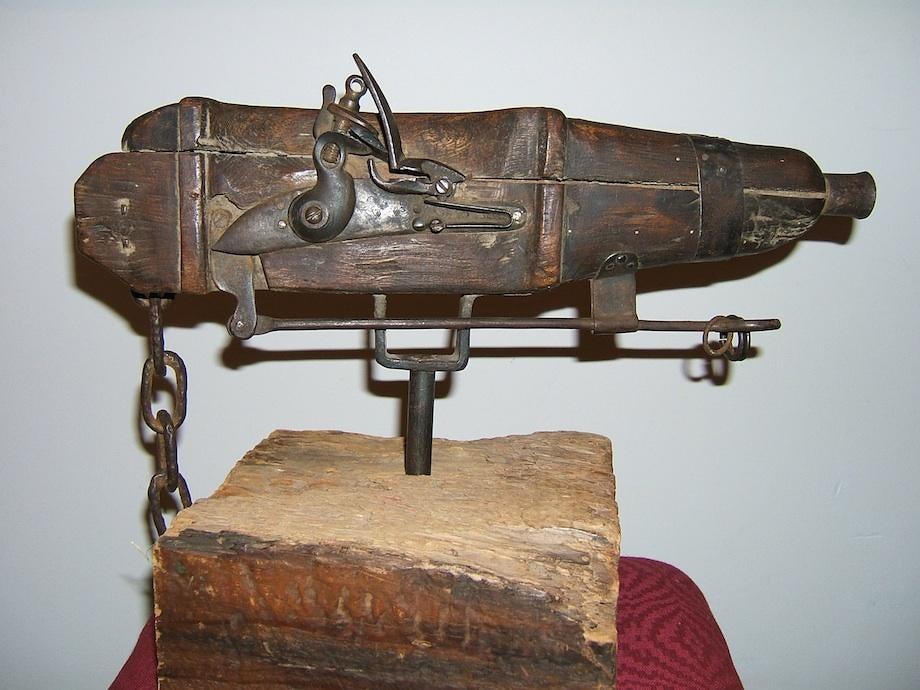 A cemetery gun: to be pointed in the direction of grave robbers.

The science of grave robbing

Disinterring and robbing graves of their freshly-buried corpses was a legitimate problem in the late 18th and early 19th century in both the United States and abroad.  In a time before textbooks, medical imaging and common anatomical knowledge, medical personnel learned anatomy and surgical techniques through dissection.  Doctors, surgeons, medical students, and instructors were only legally allowed to dissect executed criminals or donated bodies.  Neither option was popular, and as a result, there just were not enough cadavers to go around.  With no long-term method of refrigeration, the black market for freshly bodies took off.  It was even suspected that even artists sought these cadavers for their anatomical studies and works.

With buyers always in the market, body snatchers worked under the moonlight, and unless family members or legitimate cemetery workers held watch over the silent tombs, the pickings were easy and the cash was good.  These body snatchers came to be known as “resurrectionists” or “resurrection men.” The resurrectionists had a willing market for bodies, and whatever valuables they unearthed filled their own pockets.

To combat the exploding problem, creative cemetery workers fashioned what is known as the first “cemetery gun” — a  flintlock pistol, mounted on a rotating base and stand, which would allow it to swing freely.  Set near the foot of the grave and pointing towards the head, the gun would have been triggered by a series of three or four tripwires extending in an arc pattern and encompassing the fresh grave.  Unsuspecting thieves, working under cover of darkness, would presumably not notice the tripwires, stumble upon them, and meet their own demise — or at least get a dose of lead.  Though it is not clearly documented whether the guns actually worked, it would be safe to expect they were at least a great deterrent if not a truly fatal tool of defense.  There are accounts from around the U.S. of these guns being available for either rent or purchase by families who wished to protect their recently-deceased loved ones.  Those who could not afford the gun rental were at the mercy of the body snatchers.

One of the only known surviving examples of cemetery guns is on display at The Museum of Mourning Art at the Arlington Cemetery of Drexel Hill, Pennsylvania.  Museum curators date the gun to 1710, making it one of the earliest models of cemetery guns.  Part of its original rotating pedestal and three rings for tripwire attachment are visible in the photo. 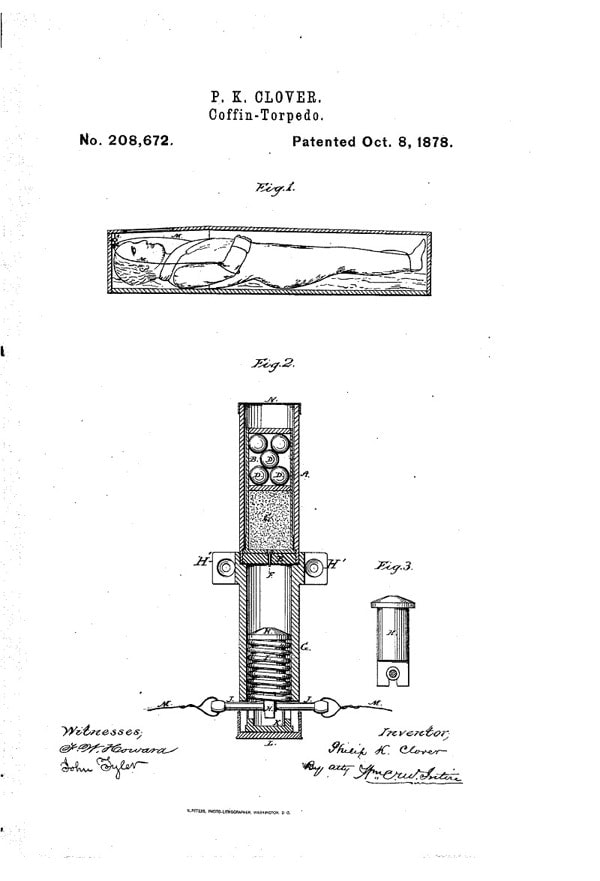 Schematics of a coffin torpedo. Not a good way to die, or to be dead.

The late 1860’s marked not only the end of the Civil War, but also the heyday of body snatching.  By the 1870’s, cemetery gun technology advanced into what became known as “Coffin Torpedoes.”

These were essentially very short-barreled shotguns mounted inside the coffin lid and triggered by the raising of the lid.  Success must have been limited because they quickly gave rise to “Grave Torpedoes,” which were not really firearms at all, but rather small explosives packed with blackpowder and ignited by percussion caps.  The torpedoes would rest either atop or just inside the coffin lid.  When disturbed, the explosive would detonate into the face of unsuspecting diggers. Certainly, this was a much more stealthy method than having an actual gun on a pedestal above ground.  There are reports of three men being killed by one of these “Grave Torpedoes” in a nighttime dig in Knox County, Ohio. 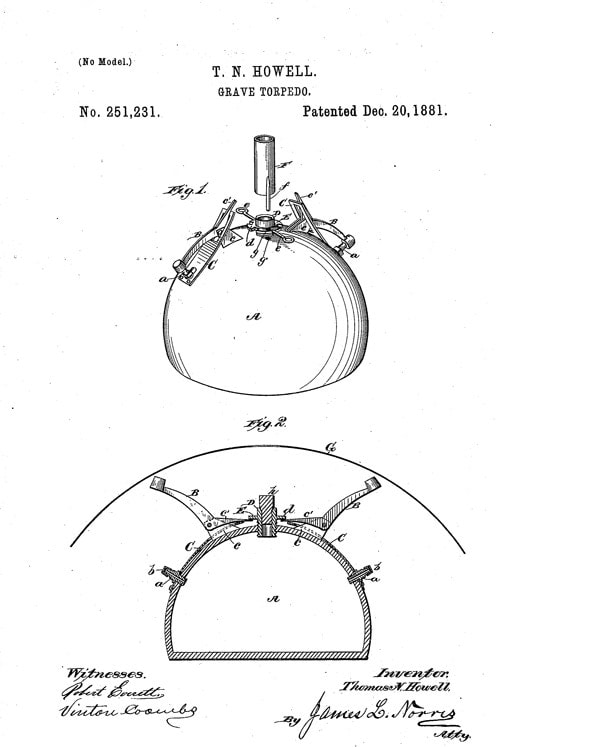 Another grave torpedo design. Looks sort of like a tomato.

By the late 1880’s, many states had passed laws allowing the medical field to dissect the unclaimed bodies of the indigent, thus ending much of the need for resurrection men.  To further detract the diggers, other states prohibited burying bodies with jewelry or valuables, required coffins to be locked inside heavy vaults, or supporting use of mortsafes — iron coffin safes or metal bars surrounding the burial plot.

With the advent of refrigeration and its availability around the turn of the next century, medical schools and the like were able to store the bodies, thus eliminating the need for nightly diggings.

With a seemingly rekindled interest in all things macabre and unusual — that means you, zombie hunters — the market for grave guns, torpedoes and homemade devices is in its prime.  Expect to pay from $1,000 to $7,500, depending upon the weapon and its condition.  Please, do not head out to a Civil War era cemetery with a shovel.  Grave-defending weapons can be seen on many historical and antique-based television shows.

If the subject of grave robbers in the cadaver trade piques your interest, check out Michael Sappol’s “A Traffic of Dead Bodies: Anatomy and Embodied Social Identity in 19th Century America.”

While grave robbery of valuables still occurs on occasion today, body snatching has faded into the annals of history.  One must pause and wonder, though, how many grave torpedoes are still coffin-locked and loaded, ever at the defense of the deceased.  Sure, the powder may be long damp, but step lightly next time you visit an old cemetery.  Some of the rarest weapons may be resting just below our feet.