One of oddest weapons ever carried by the US military looked like a massive sawn-off shotgun. With the improbable nickname of the ‘bloop gun’ this handy little grenade launcher has had an impressively long life. 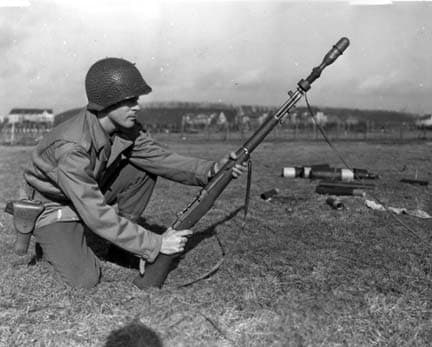 The “Bloop gun” concept can be traced back the Army rifle grenades of WWII.

After World War 2, the Army decided to usher in a new series of weapons. During the previous war, soldiers had carried rifle grenades, simple handheld bombs that could be fired from a cup attached to the standard M1 rifle out to about 150 yards with sloppy but effective accuracy. Three soldiers in each squad were trained to carry and use these devices, and the Army thought they could do better. Originally called Project Salvo, then finally Project NIBLICK, the concept was that a dedicated grenade launcher that could fire faster and more accurately than the WWII rifle grenades, would just tie down two soldiers per squad rather than three, and still be more effective. 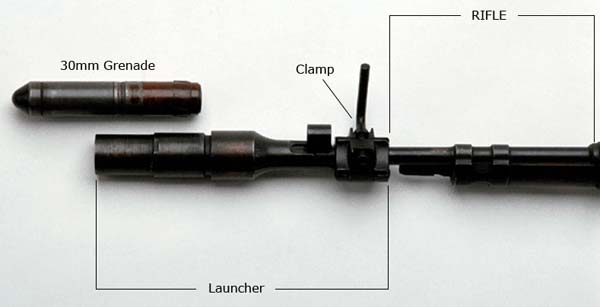 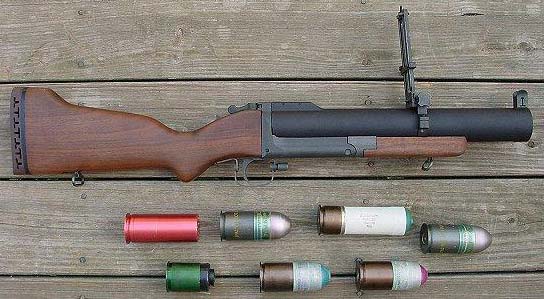 The M79 is almost comically simple. If you have ever fired a single shot break-action shotgun, you can figure one out in the time it takes you to say H&R. The gun, 28.78-inches long overall with a 14-inch rifled barrel, has no action. Pushing a latch to the side of the receiver dropped the hinged barrel open, cracking the gun in half and exposing the chamber. Drop in a 40mm grenade, close the action shut, click off the safety, cock, aim, and fire. A trained user could load, fire and reload about six aimed shots per minute. A heavy guitar-shaped wooden stock was possibly the last use of wood on a front line weapon in the US military, everything since being polymer. A blade and leaf ladder sight proved to make the weapon surprisingly accurate with a little practice. Weight of the launcher empty was 5.95-pounds, which is comparable to a single-shot 12-gauge shotgun.

The top latch is much like the one found on a break action shotgun. 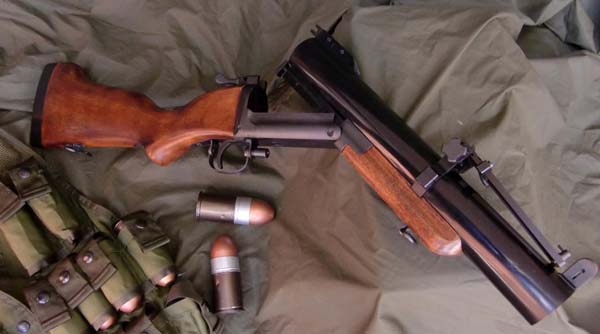 The break action M79 was often issued to grenadiers who carried a 20 round vest for reloads. 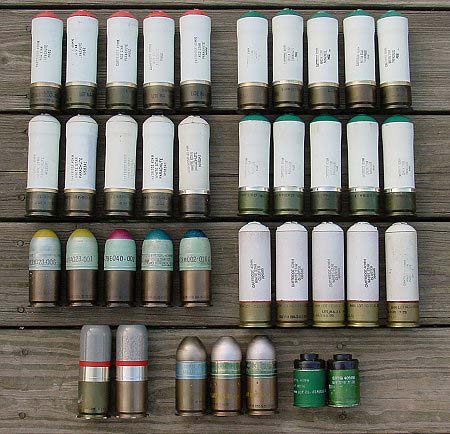 The gun/launcher fired the 40x46mm so-called High-Low Propulsion System round. The Twinkie sized shell came in two high explosive (HE) varieties, two airburst varieties, a CS variety (for hippies), a practice chalk round, and the M576 buckshot round that carried 20 pellets of shot. Then there were also smoke rounds, parachute flare rounds, and a whole family of other party favors that it could fire. These rounds were big, slow (247fps), and to keep the user from being hit by their explosive force, were unarmed until they were about 100 feet into flight by a centrifugal fuse. These rounds had a maximum range of 400-yards. When they left the stubby barrel, they gave a characteristic ‘bloop’ sound, which instantly earned the M79 the nickname, the ‘bloop gun’. 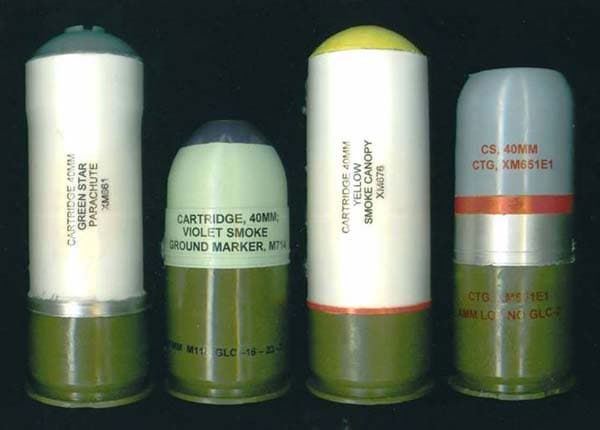 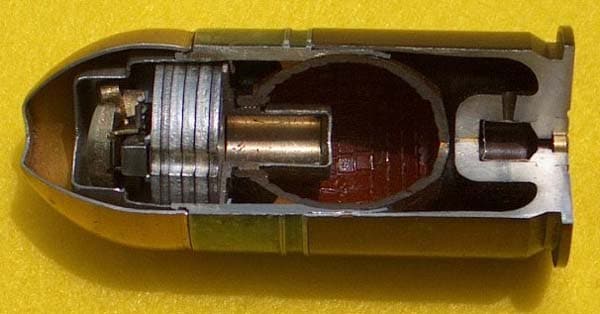 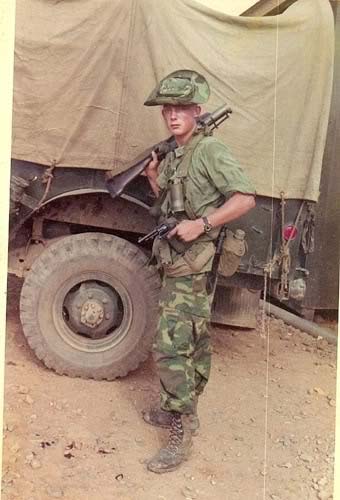 Blooper gunners in Vietnam often just carried the launcher and a handgun for protection.

The M79 began to reach the field in 1961 and soon was seeing active combat use in Vietnam. Due to the size of the launcher, soldiers chosen to carry it often did so without the backup of any other weapon. The fact that it required at least 75-feet of travel past the muzzle before it armed left these solders essentially unarmed at close to moderate ranges. The M576 buckshot round did not have an arming fuse inside of it and would fire its load of shot at point blank range, but precious few of these were issued.  The gun could however (and was) also be used as a devastating spud gun for very close range targets, hopefully hitting whoever was shooting at you, but the grenade’s explosive charge wouldn’t go off. When your only gun is a grenade launcher, everything looks like a good target for a grenade!

While platoon leaders loved the extra, mobile firepower, the individual soldiers in the field selected to carry it had a legitimate pucker factor in a close-in firefight. These problems kept the M79 from being a 100% success. 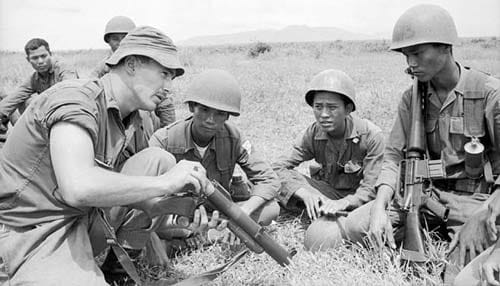 The M79 was simple enough to instruct troops in the field in its use even with a language barrier. 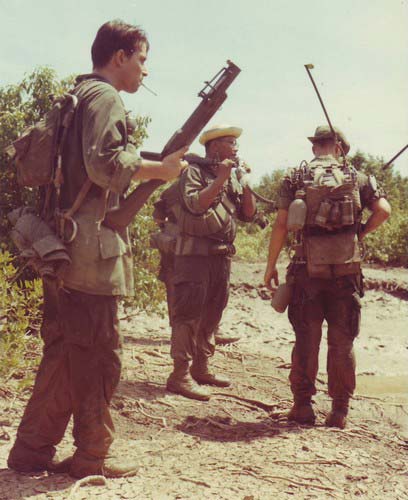 The answer came in the early 1970s when the military started introducing the M203 under barrel grenade launcher. This simple tube weapon could be fitted to the bottom of a standard M16 that had been modified with the addition of a ladder sight on the forearm to aim it. Although it fired the same low velocity 40mm round, its range was much shorter than the M79 and it wasn’t as accurate. Nevertheless, the M16/M203 combo gave the grenadier some much-needed 5.56mm backup in up close fights and it exists to this day. By the 1980s, the M79 was being rapidly replaced and transferred out to cash-strapped allied countries such as the Philippines and El Salvador who would take any free gun they could get. 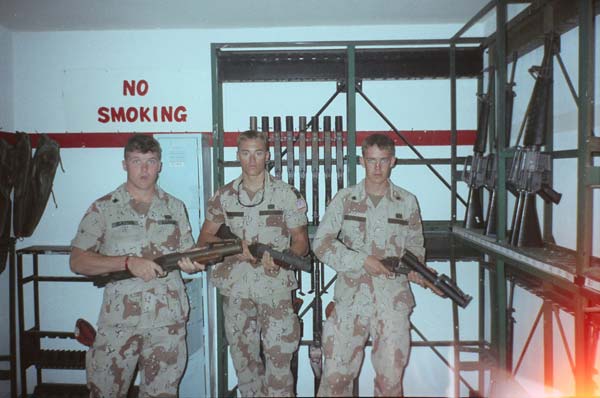 M79s remained in Us arsenal for decades after it’s Vietnam debut. 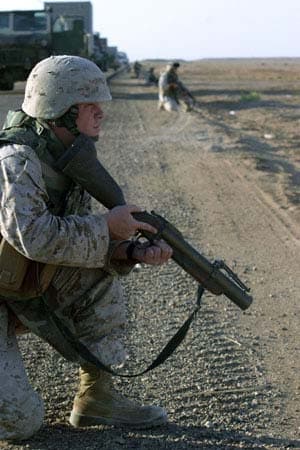 The M79 made an appearance with Marine units recently in Iraq.

The bloop gun was not totally retired in US service however. Special units such as Navy Seals and the US Army Rangers have kept a few for special occasions. Whereas the M203 was thought capable of hitting a house, the M79 with the right user could choose which window. As recently as the war in Iraq, EOD units were using the longer ranged M79 to pick off suspected IEDs at a longer standoff distance than the M203 allowed.

Another thing that has kept this vintage oversized shotgun in the public view is its place in modern culture. The M79 was photogenic and appears in more than 70 films and video games q#5ranging from The Green Berets to Left 4 Dead. You have to admit, the scene in Apocalypse Now where the quiet specialist known as ‘Roach’ reaches out and zaps a VC heckler in the dark of night near the Do Long Bridge is one of the best in the movie. There is even a book, written by the same author as the one that was turned into Full Metal Jacket, where a M79 is a central plot device. The name of the book: The Phantom Blooper. 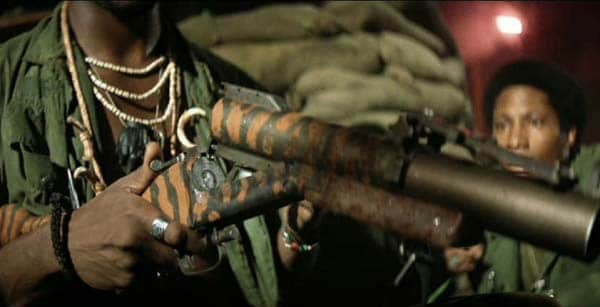 The M79 has appeared in dozens of films, ranging from Apocalypse Now to The Terminator. 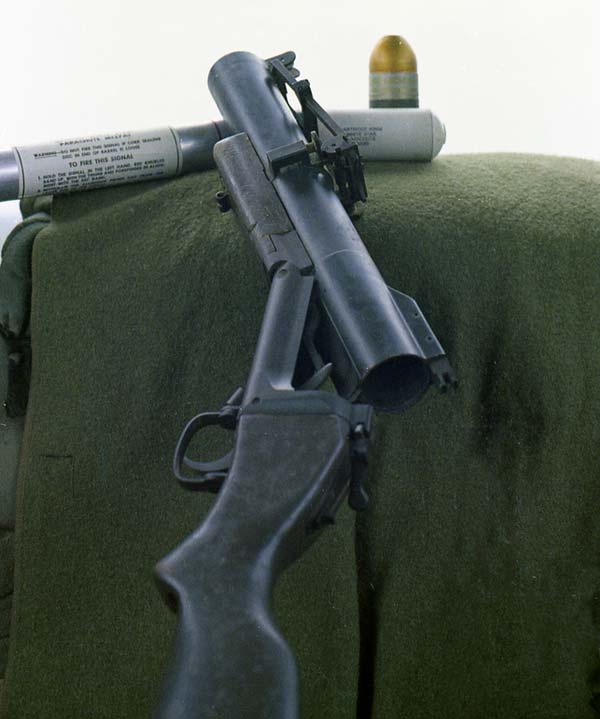 The US military made over 300,000 of these guns but most that are not still hanging around an armory gathering dust were given away to friendly countries or destroyed. Very few are wandering around in civilian hands and those that are fall into the NFA category of a Destructive Device. The bummer about this is that not only does the gun have to be registered, but so does every single live round for it, which can lead to big bucks fast. While they sometimes pop up for less, the going rate for a nice NFA registered M79 can top $15K. A few Type 10 DD manufacturers make the guns from scratch using surplus parts for about half as much, but any way you slice it, it’s an investment.

The Connecticut-based company of Bates and Dittus (B&D) have made a name for themselves selling 37mm single shot launchers over the past generation or so. As such, they sell a few wooden stocked dead ringers for the old bloop gun for about $500. While these are mainly for law enforcement use to fire less-lethal/gas/flare rounds, as long as your state doesn’t prohibit it, they are unregulated and can even be sent through the mail. 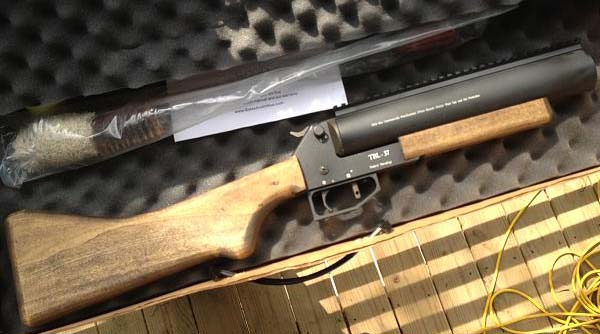 Then again, there are always airsoft guns made by a slew of companies that will trade you a wood and aluminum 1:1 scale replica that can fire foam grenades, bananas, and other items for $150-$250.