Throughout history, one of the most popular reasons to carry a weapon about your person has been protection against bodily harm, but many also carry to guard against the robbery of personal items—wallet, shoes, watch, wedding ring. While many chose to carry a concealed handgun to keep their valuables on their fingers, once upon a time the jewelry itself may have been their firearm. Enter the Petit Protector. 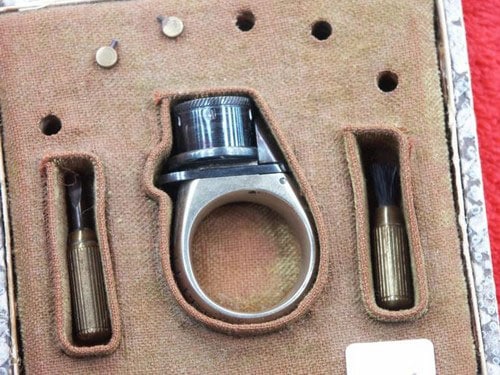 Six shot ring gun in case with cleaning tools and two pinfire cartridges (quite a find in 2013).

In the early 1800s saw the height of the Industrial Revolution, in which factories and mechanization took hold of the country and the human imagination. Frankenstein, one of the first depictions of science fiction, was written in 1818. People were fascinated with the latest technology and this definitely held true for firearms as there seemed to be a race to produce oddball defense gadgets.

At the time, personal protection guns were all the rage. The derringer, the pen-gun, the cane gun, and many other things we see as James Bond-style AOWs today had their origins in small shops across Europe and the US during this period.

The ring gun, a revolver mounted to a piece of hand jewelry, was the next logical step. 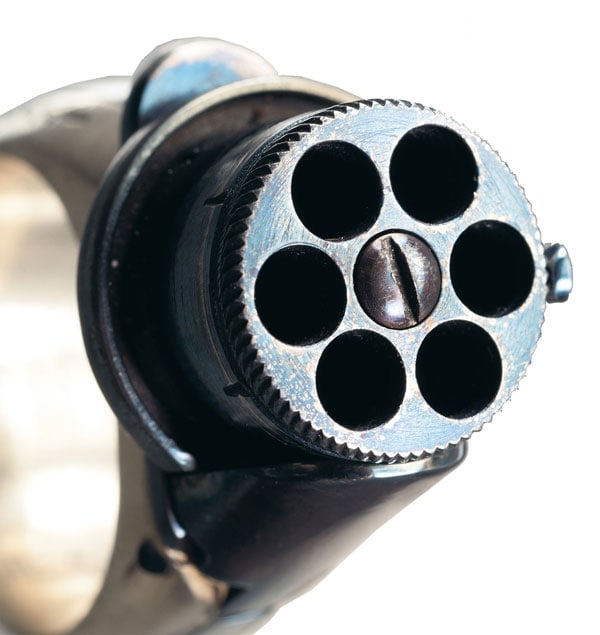 The French-made Le Petit Protector was the first documented example of this type of firearm. The frame of this manually operated pepperbox revolver is nothing more than a ring made from German silver. This copper-nickel alloy actually contains no silver so don’t let that fool you—German silver is just a term for 19th century electroplating that originated in that country for inexpensive silverware, inlays on musical instruments, and the like. Placed atop the ring, where a stone would be on a normal piece of jewelry, is a fire-blued steel recoil plate that serves as the base for a cylinder full of actual, live rounds that could be fired while wearing the piece on the hand. 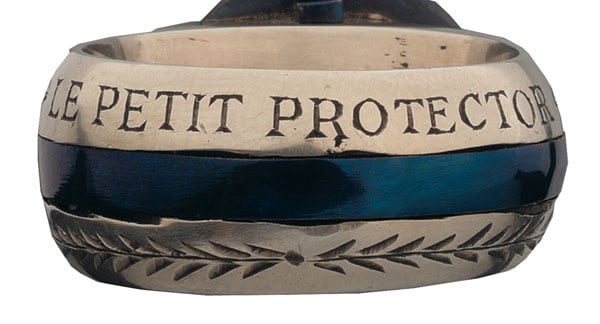 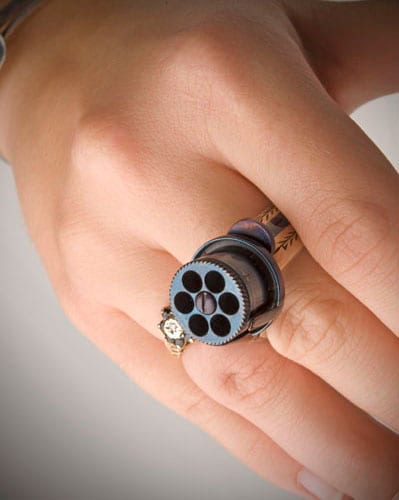 Large enough to be worn on most any finger, the revolver had to be manually rotated through each cylinder. Around the base of the cylinder were three surface control attachments. The largest of these was the sideways facing pinfire hammer, followed by the cylinder release, and the smallest would be the trigger button. Typically, the gun would be worn on the index finger and the thumb used to fire the hammer. There was no barrel, each round fired simply from its individual cylinder.  To load, unload, or reload the handgun, the user had to take a small slotted jewelers screwdriver and remove the cylinder from the ring base. Once removed, each self-contained pinfire cartridge was seated into the cylinder and then it was replaced. 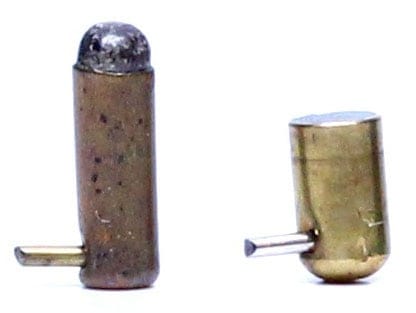 2mm pinfire ball (left), blank round (right). Note the distinctive pin primer on the base of each cartridge.

They were sold with a five, six, or 7-round cylinders in either 2mm or 4mm pinfire. In terms of size, the 4mm guns had a cylinder about as wide as a nickel while the 2mm had one closer in size to a dime. The 2mm guns were typically marked ‘Femme Fatal’, and sold in small oval shaped jewelry boxes and it could be surmised that they were for the ladies, while the larger guns could be for the fellas. For a time the company sold them as a matching set, his and hers. These sets were dubbed the Les Companions. 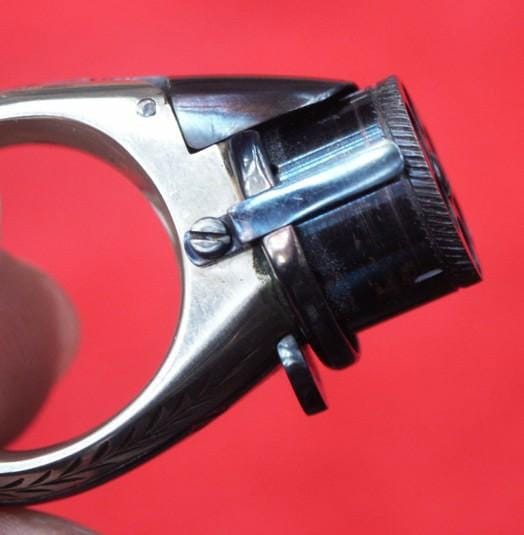 The top lever around the cylinder is the hammer cylinder releaser. The lever on the bottom is the trigger.

The Le Petit Protector and the Femme Fatal both used little brass pinfire rounds for ammunition. The pinfire was one of the first one-piece cartridges ever made. Invented by Frenchman Casimir Lefaucheux in 1828, they could also be made much smaller than the rimfire and centerfire round of today. Some of the loadings went all the way up to shotgun shell, but those fired by the ring guns were on the other end of the spectrum. These pipsqueak rounds, 2mm and 4mm, were smaller than today’s .22 rimfire CB. They sound comparable when they fire, but with just 2-5 grains lead flying at less than 500-fps from a cylinder with no barrel propelled by a tiny charge of blackpowder, the weapon only generates less than 2 ft. lbs of force. This is less than most pellet guns today, and is about enough to penetrate an inch of ballistics gel, or one side of a tin can. 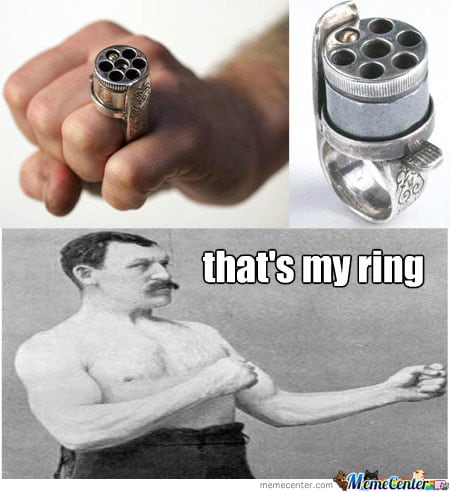 While we cannot find any documented evidence that one of these finger guns ever ended a shootout (or any video of these guns being fired today, probably due to the price of the existing ammunition), they may have been used more as a deterrent than anything else. You could certainly gain attention at a dinner party, ball, or gambling establishment with one of these rings hanging from your mitts. It also provided a certain state of perceived security for those traveling alone and, at the end of the day, the round would do some damage at extremely close ranges.

These guns disappeared from production after rimfire pistols and small centerfire pocket pieces like the Browning FN were available.  These packed a much more reliable and effective punch.

These guns were never made in great quantity and are such a novel item that they appeal to any collector of odd firearms as well as vintage gun guys. For the set that likes cane guns, pen guns and such, the Le Petit Protector and its smaller Femme Fatal sister, are the top of the food chain. As such, their value ranges anywhere from $4,000-$15,000 depending on condition and accessories. 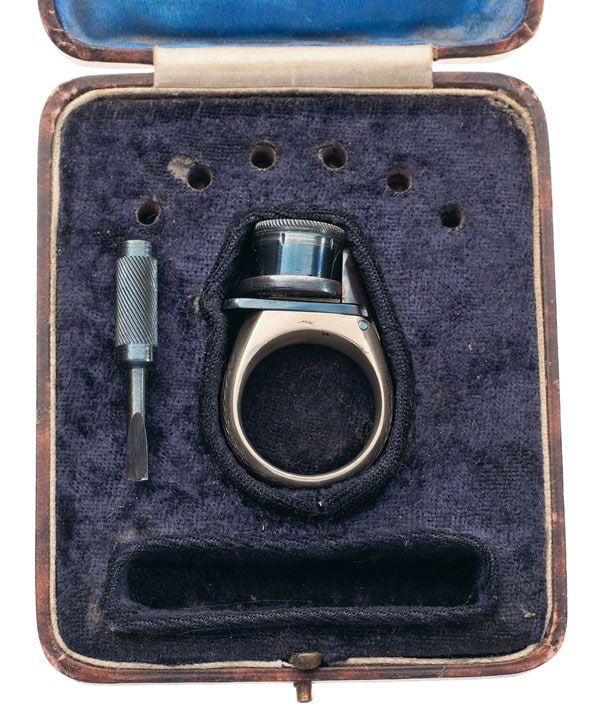 Le Petit Protector ring guns are worth much more if you also have the original box. Ammunition is however what really drives up the price.

If you ever stumble across something you think could be one of these guns, give it a close look. It will be engraved along the outside of the ring ‘LePetit Protector’ or ‘Femme Fatal’.  The gun was sold as a kit in a clamshell silk and velvet lined box that including extra rounds, an inlayed and ornamented screwdriver, a cleaning tool, and the trick ring itself. These boxes are everything in the value of the guns, so beware of ring guns going solo. 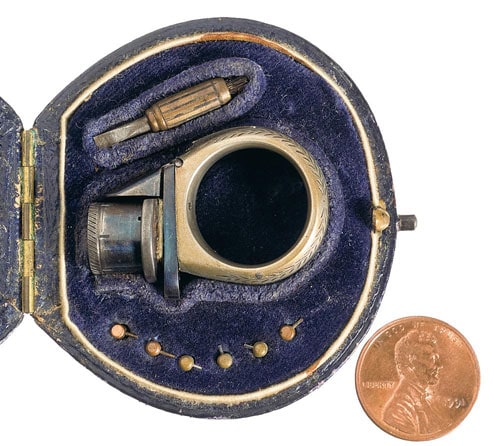 Should you want to shoot one, be extremely careful due to the age and funny nature of 19th century metallurgy. Pinfireguns.com still makes small batches of 2mm pinfire ammo at about $40 per 10 should you feel the need to light it up.

There were a number of pinfire knock offs made in Belgium and Germany in the 1850s-70s. These will be marked ‘Five Aces’, ‘Imperial Protector’, and ‘Le Quartre Morts’. While they aren’t the big money bringers that the Le Petit are, they still run over $3K in good condition. There are those today that make these ring guns custom for the steampunk fans, but for novelty purposes only.  With that in mind, try not to confuse these repros for the real thing. 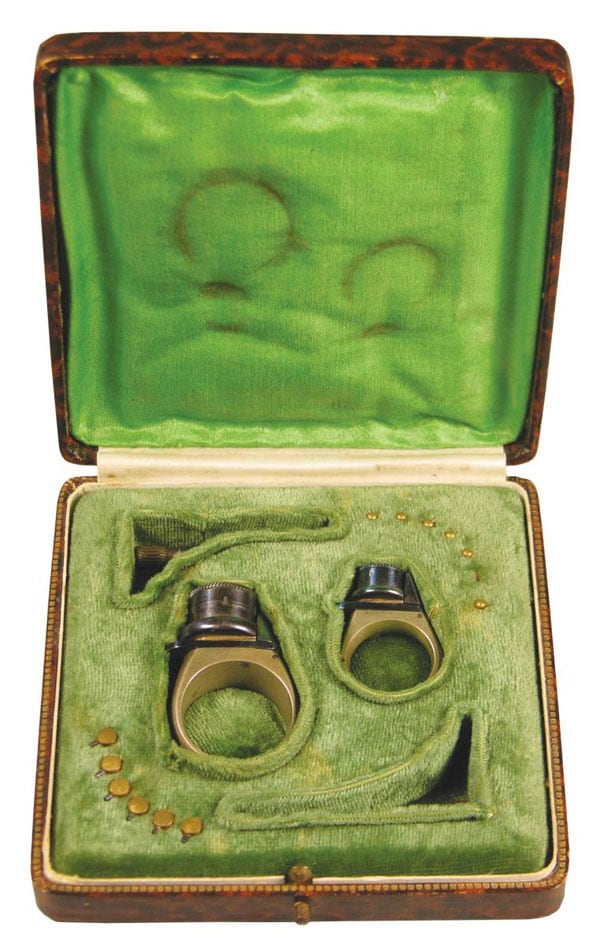 ‘Les Companions’ set with Le Petit Protector and Femme Fatal ring guns and ammunition. Note the difference in size between the two guns.

Unless it’s a ridiculously good ‘I’ll let you have that stupid thing for $20’ deal, in which case you may be the luckiest new ring gun owner ever, be sure to get it professionally appraised.

Then take it home and put your new bling in a safe place for the next person. Its really gives new meaning to the concept of a ring pop.