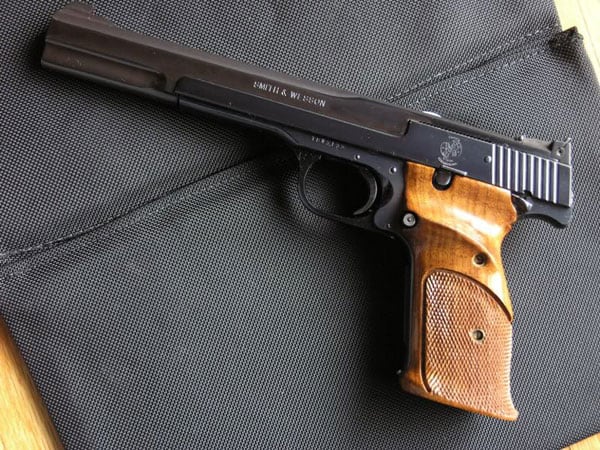 For the past 50 years, if you wanted a well-made competition grade .22-pistol right out of the box, one of the guns on your short list was Smith & Wesson 41. 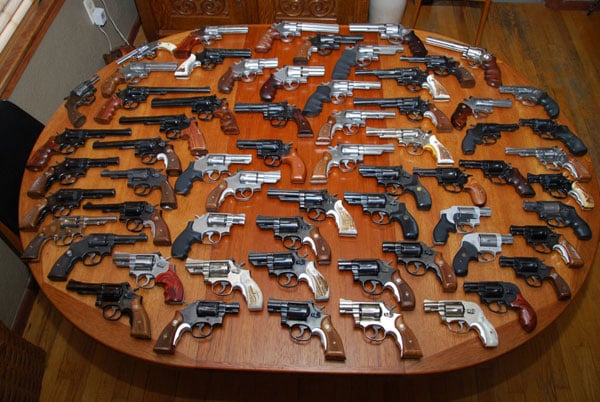 Some of the many Smith and Wesson wheel guns.

After World War 2, S&W was looking to move boldly forward into a new age. The company had been stuck on revolvers for most of their 100-year reign. During the war, they tried to produce an interesting, but failed submachine gun for the military but, true to their past, primarily cranked out .38 and .45ACP caliber wheelguns.

New Smith president, Carl “Swede” Hellstrom, pushed a number of innovative semi-auto handgun designs including the Model 39, which became the first US-made 9mm and was the grandfather of the ‘wonder nine’. Among these new designs was the 1957-vintage Model 41, destined to compete for the 22-rimfire trade.

The Model 41 was a product of the 1950s. The gun, even though designed for the humble low-pressure .22LR, was all-steel. Finished in Smith’s signature bright blue finish, these handsome guns were double-action semi-autos with a slab-sided slide.

Built for accuracy, the gun came right from the factory with a fully adjustable micrometer click target rear sight and a 1/8th inch undercut Partridge-type front sight. With a 7 3/8-inch barrel that was complete with a removable muzzle break and a 43.5-ounce total weight.

This wasn’t a glove-box gun. Its oversized checkered walnut grips had a grooved thumb rest to give it a solid and immediate feel to the pistol. 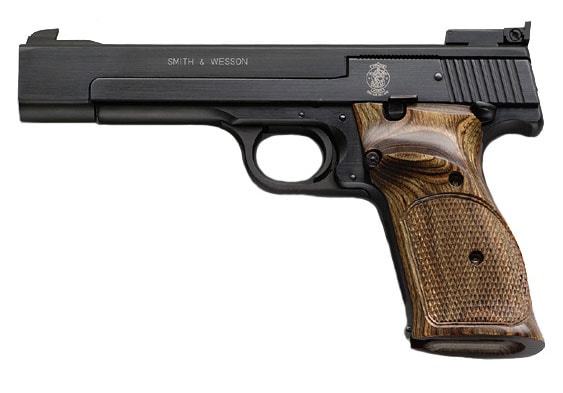 A single-stack 10-shot magazine scarcely affected the weight of the gun, but fed reliably. A fat, 3/8-inch wide grooved trigger with a sharp break and an adjustable stop cut back on the demon that is trigger slap. In short, the gun had just about everything you could want at the time in a modern, competition-grade .22 right out of the box.

Introduced in a two models, the very nice Model 41 Auto Match and its plain-Jane twin the Model 46 Auto Target hit the market in tandem starting in 1957. Retail was $93, which is about $750 in today’s money. Pricey then as now, but the public was ok with that because they worked and nothing else on the market could really compare.

For 20 years, the Smith 41 held a special place in the hearts of gentlemen backyard plinkers and competition shooters alike. They were more expensive than Smith’s 22LR revolvers and they also could not compete pricewise with the Ruger Standard pistols on the market.

Hi-Standard target guns were between designs and the Third Series Colt Woodsman, while similarly priced.  But the Smith had the benefit of being a more up-to-date design and further, the Model 41 could outshoot almost all of them right out of the box. In short, those who knew wanted a Model 41. 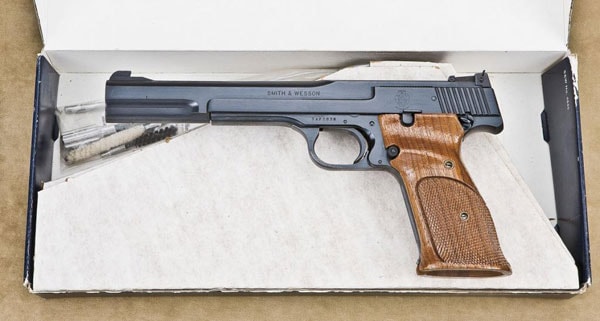 The M41 was one of Smiths most popular guns for more than 30 years.

The Model 46s run went away after just 4000 were made and an even lighter .22-short Model 41-1 popped up for a few years complete with a light aluminum slide but the standard Model 41 kept on trucking year after year. Sales were so good during the 1960s that the company had a hard time keeping up, often running a large backlog.

Improvements made after 1963 added a matte finish to the top of the pistol’s slide to cut down on glare and a new front site. For those who didn’t want even the mild recoil produced by a rimfire 22, there were at least three different sized muzzle weights as well as an under barrel weight to keep that front sight rock-steady in competition. It was still the king of US competition guns and only in the early 1970s started to see a legitimate contender in the Swiss-made Hammerli 208 then being imported.

In 1978, the company did another slight redesign of the gun that dropped the cocking indicator as well as a few other changes. These new guns had a history of issues with reliability that made them hit or miss, dragging the pistol’s legendary record down a few notches overall. 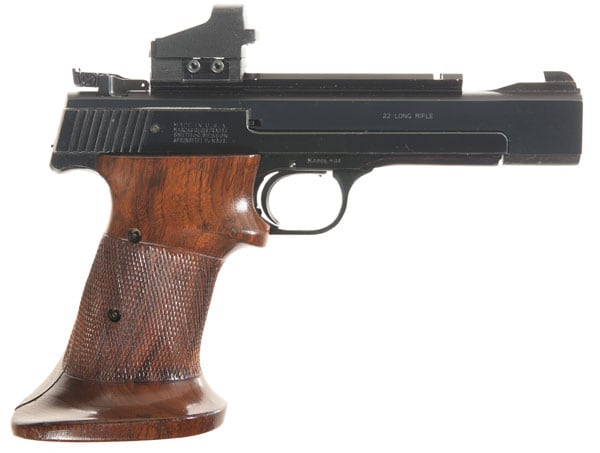 Model 41 with competitor optics and grips. 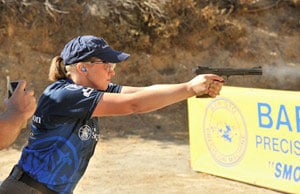 Smith tried to drop the price tag in 1989 and replace the Model 41s with the cheaper 2206 and 22A Target series of guns that proved much less successful. The old ’41 just refused to die, being brought back by popular demand for loyal customers in a limited 500-gun run in 2008, and has been put in limited production off and on ever since.

Long sought after by competition shooters at all levels, the guns are still performing well. In 2010, Julie Goloski Golob won two titles at the World Speed Shooting Championship—with a Model 41. 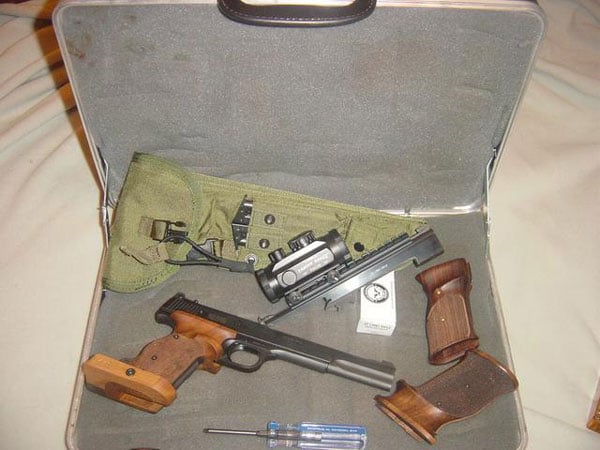 A Model 41 with a couple of barrel assemblies and grips is one of the best rimfire investments around.

In short, if you can find a Model 41 out there that works and you can afford—pick it up. These guns are the classic mustangs of the rimfire gun world. It dates back to your grandpa, but if he had one, he would have been buried with it rather than pass it on. They shoot that well.

Prices range from $400-$1200 for bone stock models depending on condition. Older pre-1978 guns, with that beautiful classic Smith bright blue finish and spot-on performance, are a solid investment. These guns are great shooters as well as being collectable. Extra barrel groups including 5-inch, 5.5-inch heavy, 7-inch, and 7 3/8-inch increase value as well. 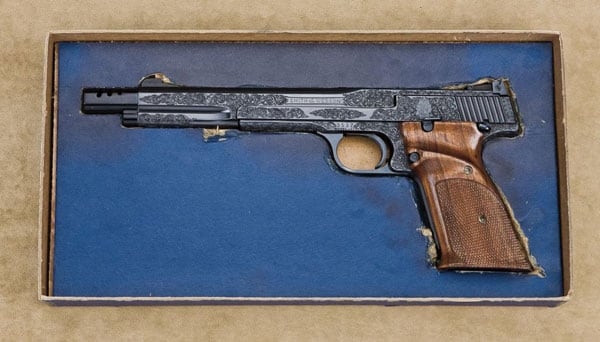 A very few factory engraved M41s are out there and can garner as much as $9,000 from collectors lucky enough to stumble over one. The oh so ordinary Model 46 tends to stick a little lower in price unless you have one that is marked as former US government property (the Air Force used them as training pistols during the Vietnam era). Besides these, the rare M41-1 .22 Short model with counterweights and muzzle breaks can often top $2K. 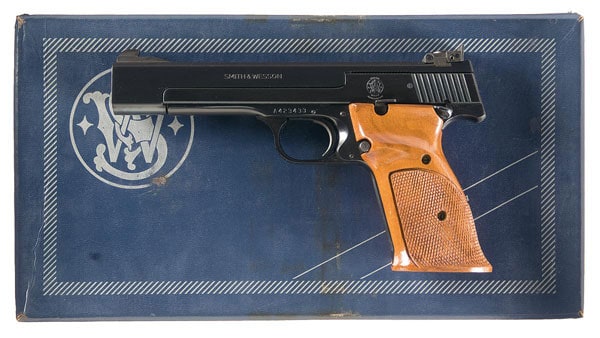 Nice old blue box Model 41s made before 1980 are sought after by collectors.

At SHOT Show 2013, Smith went back into the design vault and pulled the old Model 41 back out into limited new production. These new Performance Center guns have a MSRP of $1,369.00 (we aren’t making that up). Nevertheless, for the price you can be relatively sure they will be a reliable update of the classic and not the sometimes-problematic 1980s guns.

Still, it’s nice to see a 50-year-old classic still around.