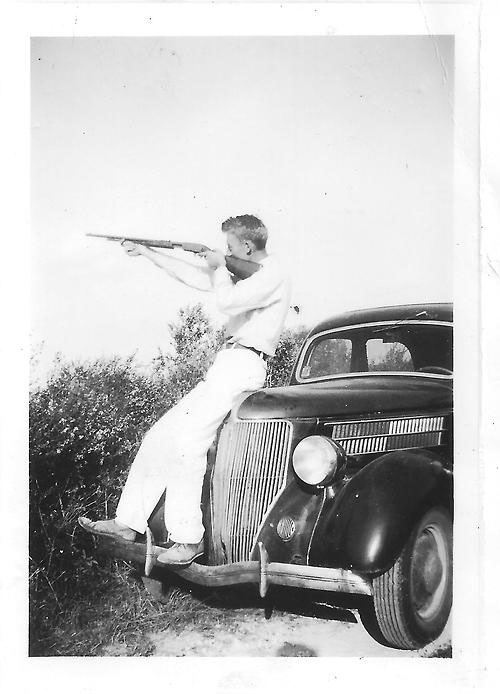 A “swell gent” enjoys a Colt Lightning rifle on a sunny day.

At the end of the 19th century, Colt Firearms was very well known for their revolvers; indeed, every man worth his salt (and quite a few women) carried a Colt. But as their six-shooters were earning the name ‘peacekeeper’ around the world, business-minded engineers in Hartford were saying, what if we sell a companion rifle, chambered for the same rounds as our hit revolvers? Then make another version for big game and then a third in a smaller caliber for target practice? That, my friends, is what you call lightning in a jar—and the genesis of the Colt Lightning pump action rifle.

Around the 1880s, Colt was looking to diversify but both Remington and Winchester had the rifle market sewn up. Besides their lever-actions, there were also new slide action rifles: the user pumped a moving arm set under the barrel and around a tubular magazine, kicking out a spent round and loading a new one with every “stroke”. Colt concentrated on this design concept and in 1884 introduced a gun with a short slide action that was so slick and so fast; they dubbed it the “Lightning”.  The advertising said it all: “Nothing was faster than lightning”.

Colt Lightning round barrel with slide racked back. 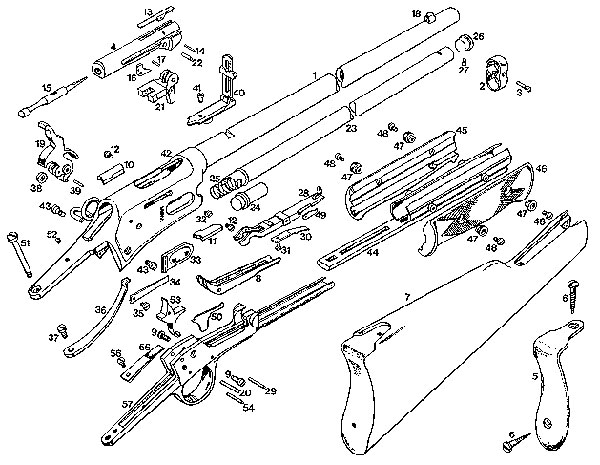 Dr. William H. Elliot, a dentist by trade, designed the gun. Half hobby, half side job, Elliot liked to tinker with things and over the course of his life came up with at least 130 inventions. Since he lived in Ilion, New York, he often walked down to neighboring Remington and showed them the interesting things he was working on and when Remy didn’t bite on his new rifle design, he sent a letter to Colt, who loved it.

The handy rifle’s tubular magazine could hold as many as 15 rounds, depending on caliber, which made it very attractive. It came in three varieties: small, medium, and large. Each of these guns had the same set up, with a deep-blued finish, case hardened hammer, American walnut stock and fore-end, and open rear and front sights. They were light, going 6.5-pounds or so. 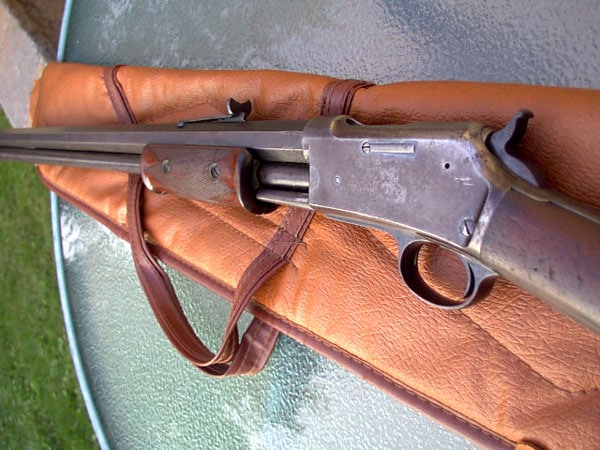 Small frame Colt Lightning, by far the most popular model and a regular sight at turn of the century boardwalks and carnival shooting galleries. 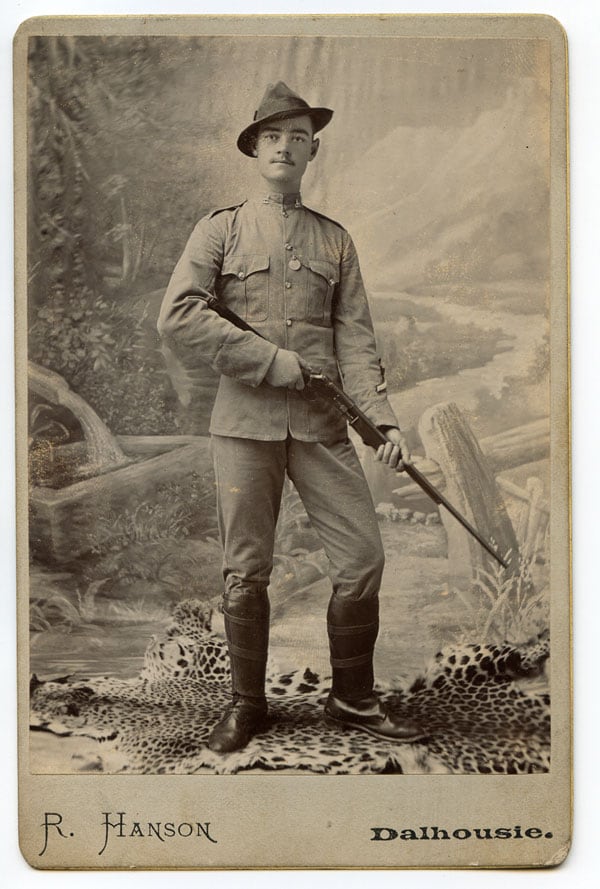 “Step right up my boy and win a prize! Just grab that little rifle there before you and shoot the ducks in the gallery. Five hits get you a teddy bear, four gets you another try, three gets the kewpie doll. Mr. Colt’s Lightning Carbine won’t let you down. ”

Small framed Lightning rifles proved extremely popular, not only with small game hunters and backyard tin-can poppers, but also in the burgeoning carnival trade. Used in shooting galleries across the country, these little pump guns had millions of rounds sent through them from the boardwalks of Atlantic City to the sunsets of Venice Beach. They have even shown up in period photographs from sporting clubs as far away as India.

This niche market helped make the small-framed variety the most popular of the line with some 89,912 made in 16 -shot .22 Short and 15-shot .22 Long subvariants. Female hunter and her Brittany hunting dog with a Colt Lightning, c. 1890.

This gun was actually introduced first, in 1884, with the small and large frame guns coming out three years later. These were sold as ‘same caliber’ partners to Colt’s revolver line and as such, were chambered in the then-popular large caliber revolver cartridges including .32-20, .38-40, and .44-40. This enabled a loyal Colt shooter who already had a revolver to use the same cache of ammo for their new rifle.

With its long, tubular magazine, the gun would hold 15+1 rounds of ammo, ready to go. Compared to single shot rifles and even the somewhat slower lever-actions, these were the patrol carbine of their day. Some 89,777 of these weapons came off the lines.

A ‘Baby” version of this already small rifle was made with a cute little (and very un-ATF friendly these days) 15-inch barrel that held 10-shots in its abbreviated mag.  The weight of the Baby carbine was a cuddly 4.5-pounds. We’d like to venture that this gun, if made today in say .357 or .44 and polymer stocks with a tactical rail would still be popular in law enforcement.

Old Western lawmen in the twilight of that era liked the Colt medium frame pump rifle, both for its firepower and it commonality of cartridges. These included Sheriff RM “Bob” Glover of Gonzales County. A Colt Lightning appears in the classic Clint Eastwood spaghetti Western, For a Few Dollars More, carried by the deadly professional Col. Douglas Mortimer, played by Lee Van Cleef.

Some 401 of these guns, specifically 26-inch barreled, medium-frame models in 44-40 WCF, were bought by the San Francisco Police Department in 1898. These rifles are in their own serial number range and are marked “S.F.P. (serial number)” on the lower tang.

The large caliber (.38-55 Winchester, 45-60, and .50-95 Express) guns were by far the fewest produced with just 6,496 coming off the line. Today these guns (barring a SFPD marked medium frame) are the most sought after of this particular family tree. Since they had longer cartridges, the magazines on these guns were generally 10-rounders rather than the more common 15-shots.

These guns are some of the most collectable of all vintage US firearms. If you are looking at acquiring one, or are considering selling your own, be sure to have it professionally appraised before doing so. 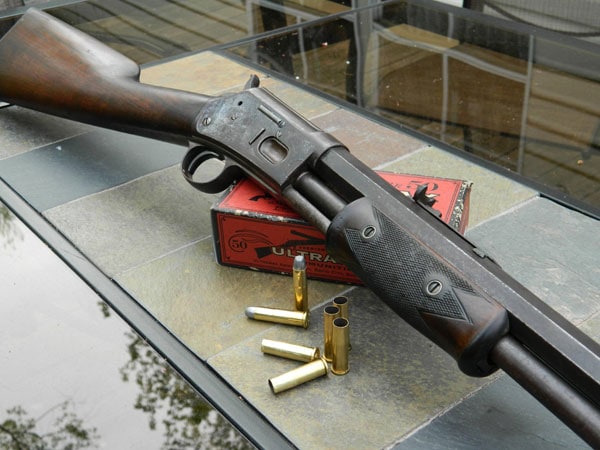 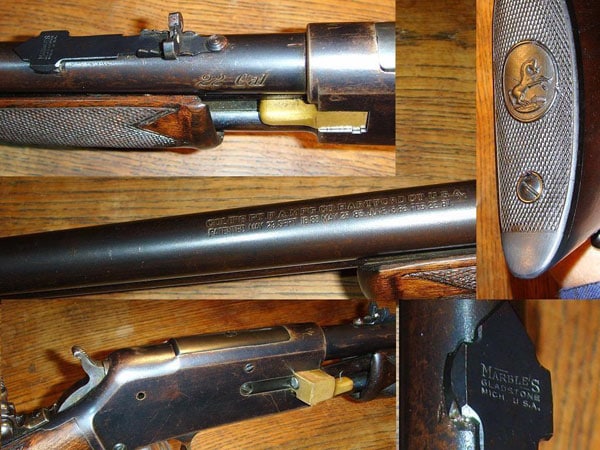 Colt stopped production of these guns as a group by 1904, so even the newest of these on the market will be a century old. Also, some examples have seen far more hard use than others, so be sure to keep in mind the guns age and former use when inspecting it. This is particularly true on the small frames, many of which saw hard use as rental and gallery guns. (It is not unusual when inspecting old shooting gallery 22’s to find that the last few inches of rifling scored away long ago by unscrupulous boardwalk barkers looking to ensure a series of missed shots.)

While it is possible to stumble across Colt Lightnings in poor condition for around $600, they generally fetch much higher prices. Excellent condition small and medium framed guns will typically run over $2500 while the rarer large frame models will fetch close to $5000. Don’t get your heart set on a C&R eligible non-NFA listed Baby Carbine though, as these 15-inch barreled beauts can run the $10K all day.

Barrel markings will have the above patent dates. 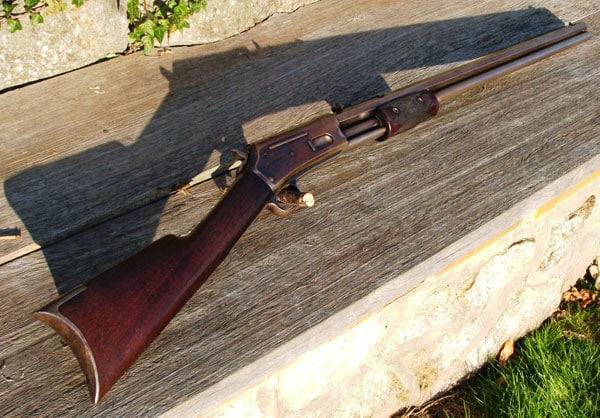 Colt Lightning with octo-barrel and low finish. A fine specimen… 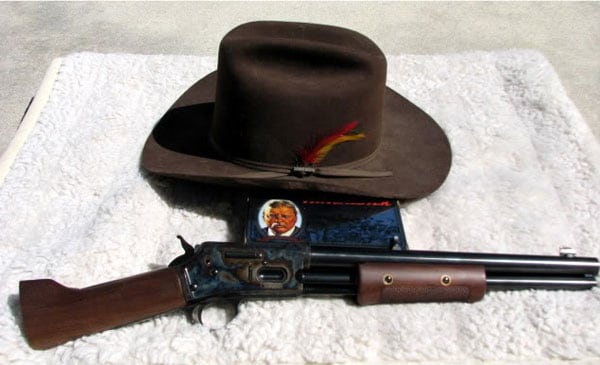 If you want a less collectable but more shootable gun, several companies can help. AWA produced the Lightning Bolt, a Mare’s Leg type of pistol inspired from the old Colt. Uberti has been making replicas of the Lightning for the past several years. Since you can’t run out and buy .32-20 or .44-40 at the local big box anymore, the new Italian guns are chambered in the more readily available .357 and .45 Colt instead. They have a MSRP of $1279.

Uberti made Colt Lightning replica.  Replicas are a better bet for buyers looking to shoot their purchase.

That’s a lot of kewpie dolls.