Desert Tech rolling out a new five-caliber bullpup for (2014) 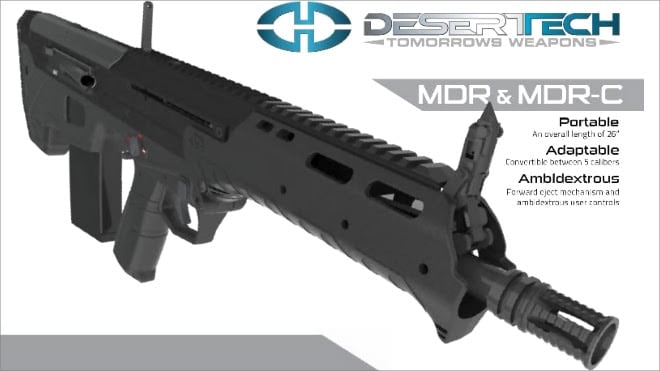 Desert Tech — formerly known as Desert Tactical Arms — has a product that we’re very excited to see next week at SHOT Show, and we’ve only seen the tip of the iceberg. For 2014 they’re launching the Micro Dynamic Rifle, or MDR, a new multi-caliber bullpup rifle.

The company, known for their bullpup sniper rifles, is following suit with the MDR, a bulllpup carbine. Desert Tech says the bullpup will be able to convert between five calibers, without tools.

We can only speculate as to what this rifle will be chambered for. Judging by the size of the magazine it looks like it could be a heavy-hitter, like a .308 Winchester. If it is there are many cartridges that could be used in the rifle, from .308 family cartridges to intermediate cartridges with a magazine adapter.

It would not be surprising for Desert Tech to introduce a big-bore bullpup; their products are all sniper rifles chambered for .30-, .40- and .50-caliber cartridges.

The bullpup has an all-new, patented sight system that ensures the sights maintain their zero no matter what cartridge the rifle is configured for.

The rifle is said to be balanced and weigh 7.5 pounds, which is at the lighter end of the bullpup spectrum, and even then, because bullpups have little leverage, often feel lighter than traditional rifles.

The MDR is also fully-ambidextrous. The rifle uses a forward-ejection system, meaning the spent casings come out the front, and the controls are also ambidextrous.

We don’t know what this gun’s going to be chambered for and we can’t tell you how much it will run. Desert Tech doesn’t make inexpensive rifles, with their guns running between $3,000 and $5,000. That doesn’t mean this will also be a premium bullpup, but it doesn’t rule it out, either.

A Salt Lake City firm, Desert Tech recently turned down a contract with the Pakistani military worth up to $15 million on grounds that they did not trust that the guns would remain in Pakistan.

“Our greatest fear was that our equipment might be used against U.S. troops,” Desert Tactical President Nick Young said on Facebook. “I started this company to protect Americans, not endanger them. … After much internal review, we elected not to sell to Pakistan.”

Keep an eye out on the company website for more information.