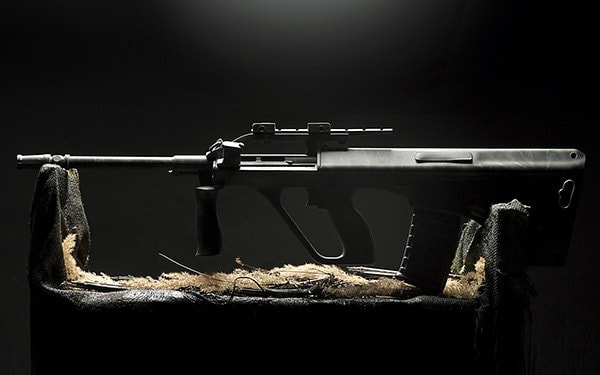 Simple, elegant and distinct, the Steyr AUG was designed in the 1960s.

Born out of sober, Austrian Cold War preparation, if there was ever a rifle that turned heads and divided the opinion of the gun world, it is the-futuristic-is-now Steyr AUG. Love it or hate it, this inviting 5.56mm bullpup has indeed dug its way to respect in some of the most unlikely parts of the world.

Why was it born? 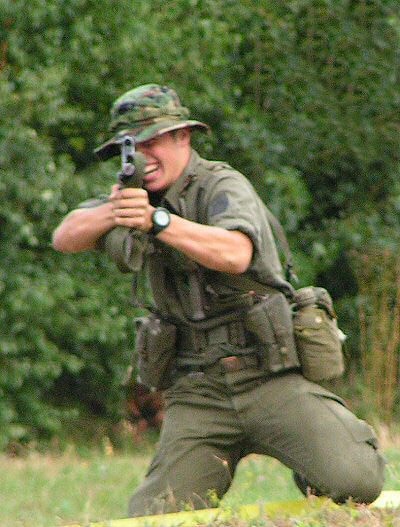 The AUG design was born out of the Cold War as a means to ensure official “Austrian neutrality”.

The modern Austrian Army, the Bundesheer, was in a tough spot in the 1970s. Although Austria was officially neutral, to the East, the country shared a border with the Warsaw Pact countries of Czechoslovakia and Hungary, and to the West, it bordered NATO West Germany.

In the event of World War III kicking off, the prospect of having to fight either Soviet/Warsaw Pact or US/NATO forces wishing to pass through was very real. As such, the Bundesheer used conscription to have a large force of reservists ready for war. This meant that the tiny 30,000-man force could swell to almost 300,000 in wartime. Heck a young Arnold Schwarzenegger even served his time in the ‘heer back then.

Prior to 1971 -year-old draftees in the Bundesheer were given a year of initial training before being sent home to the reserves. Then, after that date, draftees were only given six months. The standard rifle of the time was the FN FAL, license built by Steyr as the Sturmgewehr 58.

The FAL was a beautiful 7.62x51mm NATO standard battlerifle, but it was long (at 44-inches), heavy (at 9.5-pounds unloaded), and needed a good bit of training to keep running properly. With already short training times cut in half and declining numbers of healthy draftees, the Austrians needed a more efficient, compact, and easy to use rifle.

Steyr, long the supplier of rifles to the Austrian Army, submitted a prototype rifle called the AUG (standing for Armee-Universal-Gewehr—”universal army rifle”) for testing. 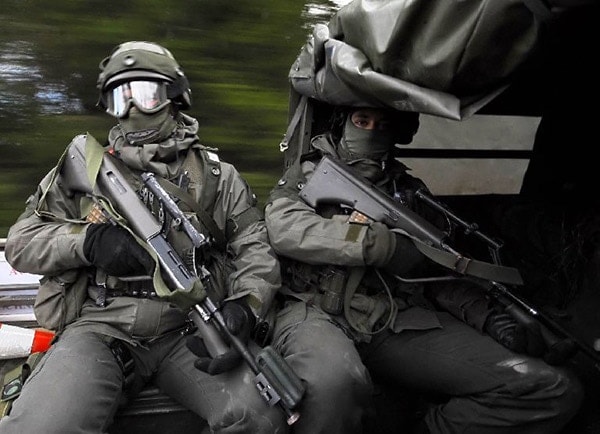 Austrian troops with AUGs in training.

From just a glance, you can see that the Steyr AUG is very different. The entire action including the chamber, slide, bolt, hammer, guide rod, magazine, cocking piece and retaining bolt are all to the rear of the trigger, hidden inside a club-shaped hollow polymer (plastic) buttstock. The only thing above and in front of the trigger is the barrel and barrel grip. 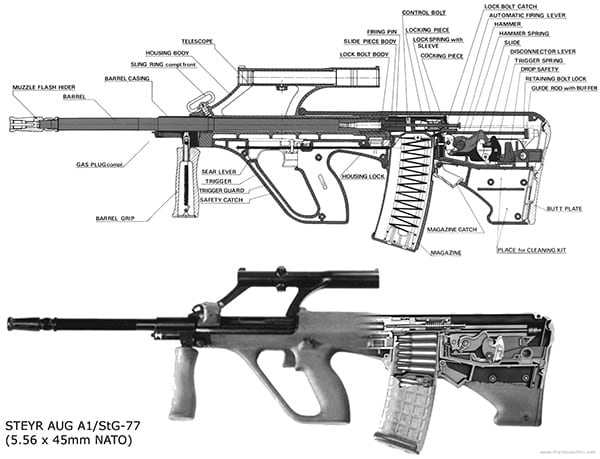 Most of the AUGs mechanics are hidden in the hollow buttstock.

Lightweight was a huge factor in the weapon’s design. Polymers were used to extreme; even the trigger pack (except for the springs, steel bearing pins and catch hold-open) was synthetic. This allowed the full-sized rifle to be just 31.1-inches long, and weigh in at 7.9-pounds. This is more than a foot shorter—not to mention a pound and a half lighter—than the FN FAL the Austrian Army used at the time. Likewise, the AUG used 30 and optional 42-round lightweight polymer magazines for the more controllable 5.56mm NATO rather than the FAL’s 20-shot 7.62mm steel boxes.

The 20-inch, 6-groove, and 1:9″ twist barrel was extensively chrome-lined; a trick borrowed from the Russians who long did so in their SKS and AK series rifles. This kept the rifle cleaner, longer, which came in handy when shooting select-fire at up to 750-rounds per minute. Also copied from the Russian SVT-40, the has pressure system on the Steyr rifle was made adjustable in the field so that it could be fine-tuned. For a rifle that could see combat anywhere from 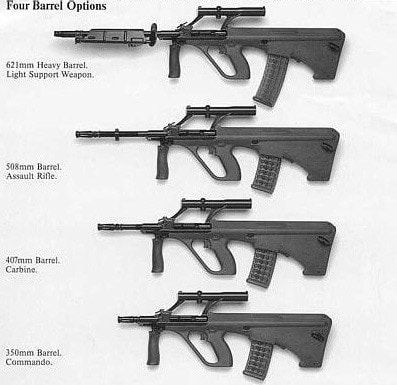 downtown Vienna on a 70-degree day to the frozen passes of the Alps in winter, this was a smart idea.

A fixed locking bolt, with seven locking lugs ensured both safety and a strong positive lock-up.  Unlike most rifles, then or now, the bolt group could be swapped out to fire for either left or right-handed shooters. This modularity is further demonstrated by different length barrels that could be quickly swapped out, making the gun a shorter carbine for special operations guys, or made longer for marksmen. Ergonomics of the AUG included adding a simple but effective folding grip forward of the trigger for the support hand, predating the forward grip used on today’s M4 by two decades.

Further, instead of the iron sights used on rifles since the 19th century, the AUG came standard with a fixed 1.5-power Swarovski optic mounted inside the carrying handle at the top of the rifle. With gentle magnification and a simple ‘donut hole’ reticle, first time shooters with a minimum of training could hit man-sized targets out to 300-yards. Everyone shoots better with a scope, right? 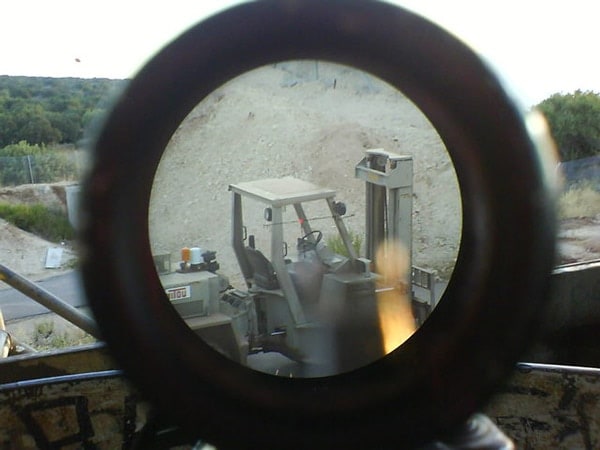 The built-in Swarovski 1.5x scope of the Steyr AUG is very simple.

The innovative Steyr AUG rifle was adopted in 1977 by the Austrian Army after field tests under the name Sturmgewehr 77 (StG 77) making it one of the first militaries in the world to adopt a bullpup rifle (even before the French FAMAS), one of the first non-NATO countries to move to 5.56mm, and the first to issue all ordinary conscripts optically enhanced rifles. Even though the Austrian Army hasn’t had to repel an invasion in the past few decades, the AUG was carried and used in UN Peacekeeping operations in Lebanon, Bosnia, and Kosovo among other vacation spots.

While the rifle sounded great on paper, it suffered from looking too Star Wars for the conservative military purchasing agents around the world. With its odd shape, funny controls, unique waffle magazine made of plastic, and overall ‘not made here’ weirdness, the AUG spent a quiet decade in nearly the sole service of the Republic of Austria. The country continued its trend in buying locally made polymer guns when it was the first country to adopt the Glock in 1980. 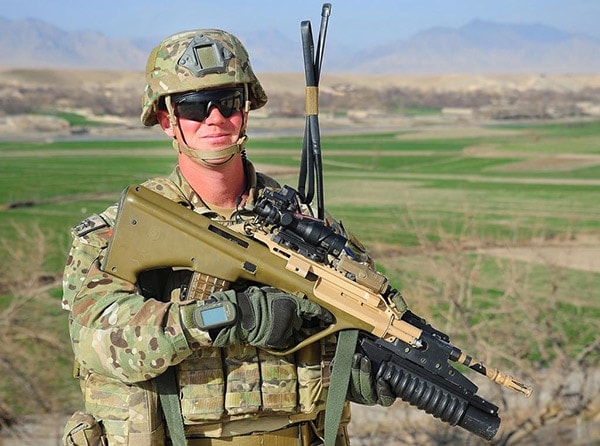 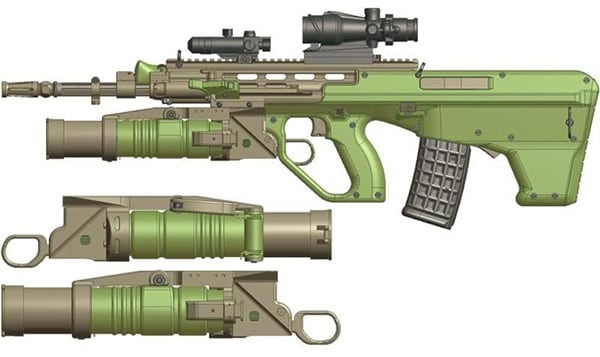 Steyr AUG F88 mod in use with the Australian army. Note the under-barrel grenade launcher. 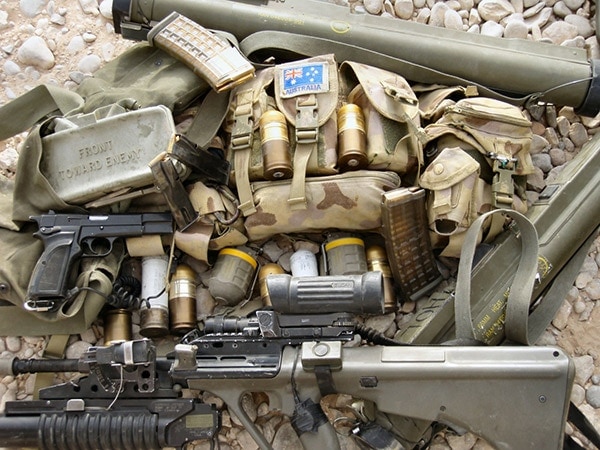 Then in 1988 the Australian and New Zealand armed forces adopted a slightly modified (1:7 inch rifling) Steyr AUG for their standard rifle, replacing a variant of the FN FAL. Called the F88 Austeyr, it is licensed produced ‘down under’ for these countries and as such has been carried into harm’s way in very real shooting wars in Afghanistan, Iraq, and East Timor. Once the Aussies and Kiwis broke the boycott against the AUG, the gun saw rapid adoption around the world and is now carried by the Saudis, the Irish, the Dutch, Morocco, and by special ops groups both seen and un-.  Today Steyr’s bullpup is found in media footage from Syria to the Philippines. 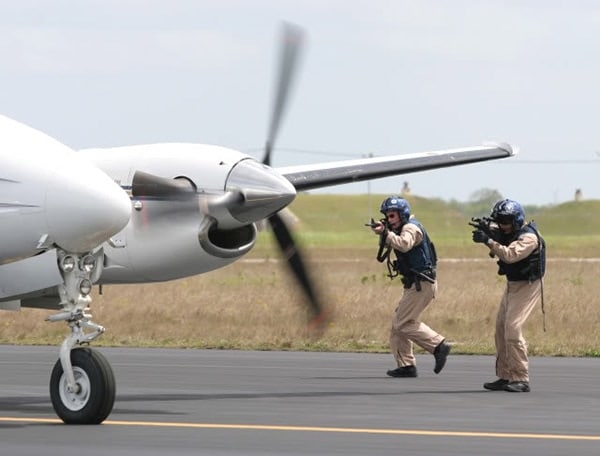 US customs and later the Dept. of Homeland Security have long used Steyr AUGs such as the one in the hands of the CBP Air Interdiction officer to the far right. 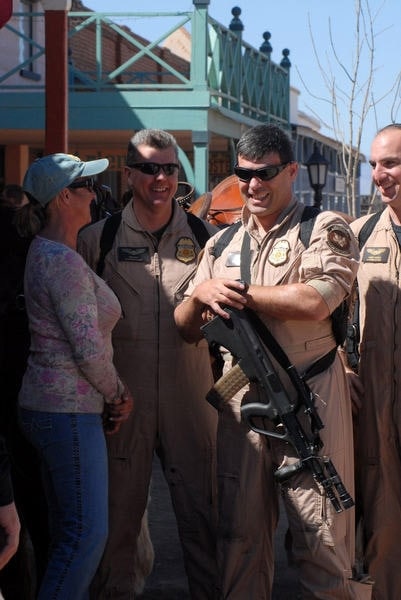 The United States even got into the act in the late 1980s when ICE (Immigration and Customs Enforcement) bought a number of select-fire AUGs for use by its Blue Lightning Task Forces across the country. Although Blue Lightning has since disbanded, these guns were later passed down and still show up in various branches of the Department of Homeland Security from time to time.

Steyr still very much has the AUG in current production in a number of variants that include a 9mm SMG, a squad automatic weapon, a heavy barrel marksman rifle, and carbines. All prices on request. 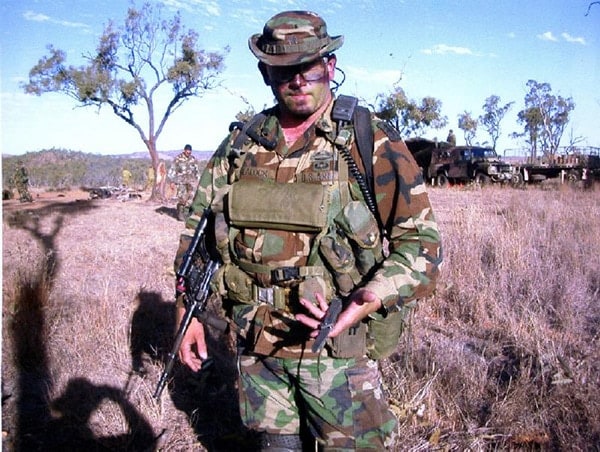 US army adviser with Steyr AUG. 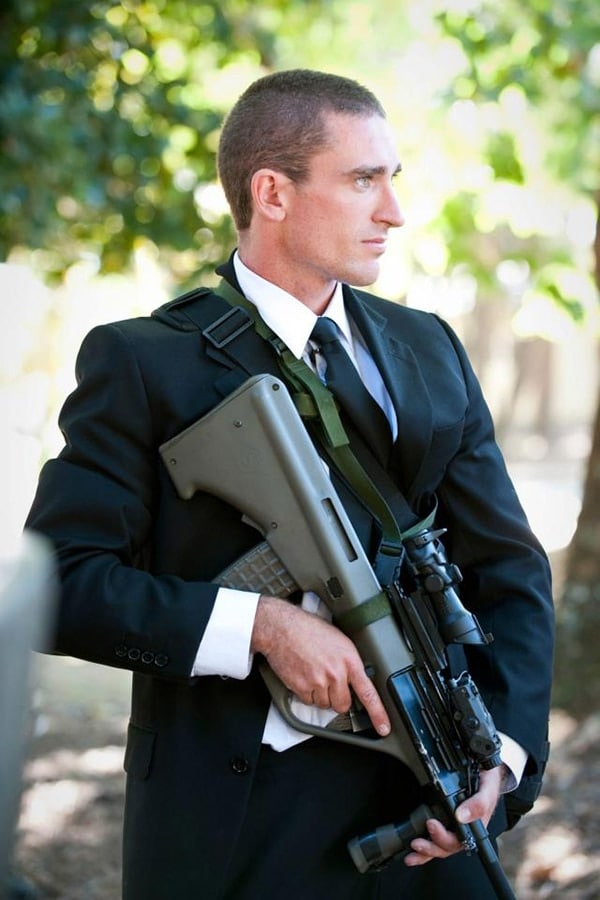 A3 AUG for exec protect complete with ACOG. Most Pre-ban Steyrs in the US were imported by Gun South of Trussville, Alabama and are marked as such.

A few real-deal Austrian made Steyr AUGs, capable of going full-tilt select-fire, were imported into the United States prior to 1986. These precious pre-Hughes Amendment guns garner as much as you are willing to pay for them and, of course, all Class III paperwork applies. One source claims only 38 of these guns were brought in, and the last one we can find for sale went for $18K. Dealer samples of formerly semi-auto guns converted with a registered pack go for almost as much.

When the supply was cut off at the source, a few local domestic outfits started to make their own home-brewed semi-auto only AUG clones. These included the Microtech MSAR STG-556 (which uses M16 style mags) and the Tactical Products TPD USA AXR. Neither of which have done particularly good in sales but used examples can be had for around $1200. 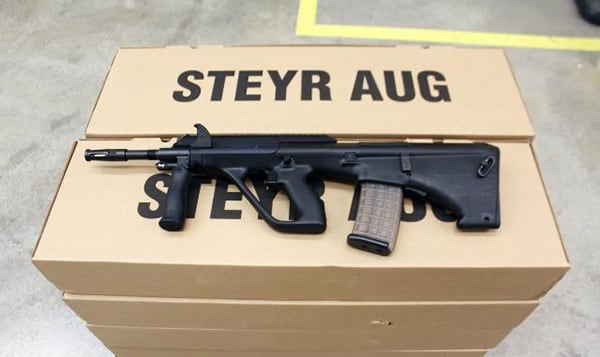 Steyr A3s come without the original optics. MIL STD 1913 rails allow you to mount your own.

And since we mentioned semi-auto only versions of these Austrian pupguns, ‘pre-ban’ models of the old A1/A2 guns go for around $2K even in used condition. Newer A3 semi-autos from Steyr USA go for just slightly less. These guns, while they don’t have the classic 80s panache of the old 1.5x built-in scope, they do have the benefit of Picatinny to add whatever ACOG/EOTech etc. you like.