From time to time everyone has had experiences with unwanted pests and varmints of all kinds.

In 1882, in Fredonia, Texas, one very inventive homesteader by the name of James Alexander Williams decided to go to the next level in the war on vermin by bringing in the big guns. 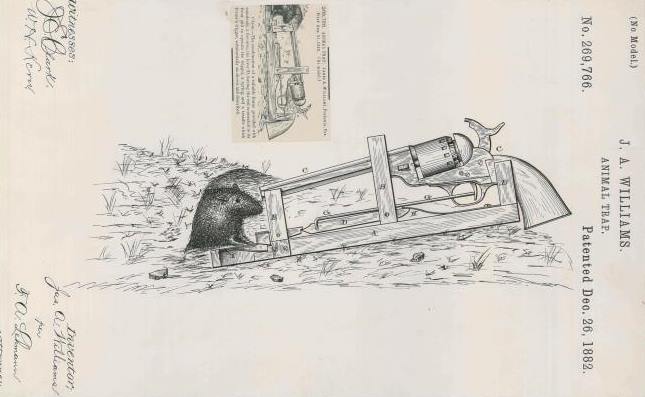 Williams’s animal trap delivered its punch line at point blank range. Curiously, the cap and ball revolver in the technical drawing does not appear to have its rammer rod attached. (Photo credit: National Archives)

According to the application filed that August with the U.S. Patent Office, William’s animal trap design coupled a “suitable frame upon which a revolver or pistol is secured, a treadle which is secured to the front end of this frame, and a suitable spring and levers, by which the firearm is discharged when the animal steps upon the treadle.”

In short, as long as the handgun fit the frame, your trap was good to go.

At the time, Chester A. Arthur was president, horses and steam locomotives were the main sources of transportation, the flag only had 38 stars, and most European countries were still led by a monarch. This left pest control firmly in the hands of the everyman. 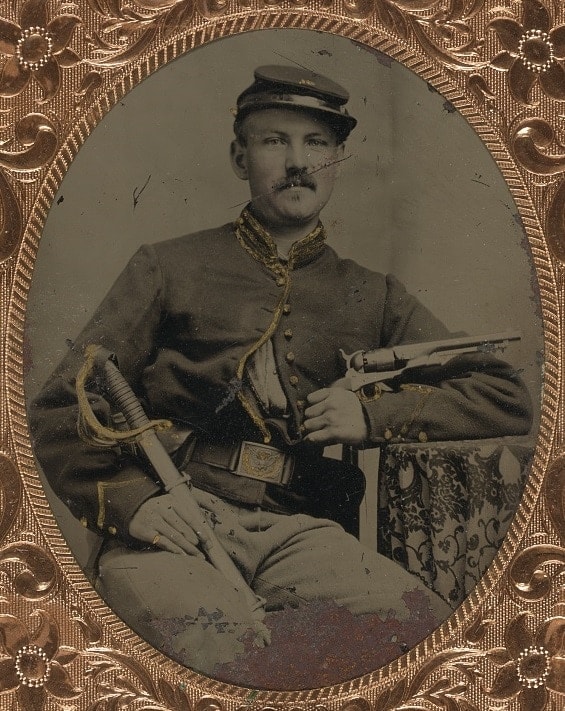 The gun used in the exampled drawing was a blackpowder Colt such as the one seen with this Civil War soldier. Made from the 1830s to the 1880s, these were the most common handguns of the age and Texas was no doubt awash with these revolvers at the time of Williams invention. (Photo credit: Library of Congress)

“The object of my invention is to provide a means by which animals which burrow in the ground can be destroyed, and which trap will give an alarm each time that it goes off, so that it can be reset.” Williams continued.

While we cannot conclude that the varmints in central Texas were bigger in 1882 than they are now, we can surmise that they must have been pretty ornery to warrant the use of such heavy artillery as the Colt cap and ball revolver shown in the patent application drawing.

The typical .36 caliber pistol balls of the time, pushed through by a blackpowder charge strong enough to leave the barrel, still packed about 100 foot-pounds of energy at the muzzle– comparable to a modern .32 ACP of today.

Of course, by the 1880s when this invention was designed, more modern cartridge revolvers like the Colt Peacemaker and Smith and Wesson Model 3 were around, and could have substituted for the war surplus cap and ball revolver in the drawing.

This gives the animal trap more flexibility for larger caliber pests. This is pointed out in Williams’ application.

“This invention may also be used in connection with a door or window, so as to kill any person or thing opening the door or window to which it is attached.”

After $35 in fees and much correspondence with Washington, Patent 269766 was granted to Mr. James Alexander Williams the day after Christmas of that year.

While we can’t find any information on if Williams’s animal trap was ever put into production, we can tell you that there were several alarm guns that were manufactured at about the same time. Often these were used to protect bodies from theft rather than to control nuisance wildlife.